Turismo Prerrománico > Copies of the Commentary : The Blessed

Copies of the Commentary : The Blessed

As we have already mentioned, very few Spanish manuscripts prior to the 10th century have been preserved, although there are many references to a large number of works by Hispanic authors from the second half of the sixth century and of many Christian scriptoriums both in the Visigoth kingdom, and later in Arab Spain and the kingdom of Navarre. The original of the Commentaries to the Apocalypse of Beato de Liébana is one of those manuscripts that disappeared, but in this case the work must have been well known and, for many different reasons, aroused the interest of those responsible for Christian worship in the reconquered territories, what coinciding with the great boom of monastic life in the tenth century and the hatching of the Mozarabic miniature, in which a whole generation of illuminators of enormous quality and creative ability flourished, has allowed them to reach us, within a wide set of codices miniados, an important 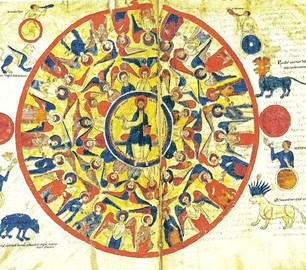 number of copies of the “Blessed”, dated between the X and XIII centuries, some very complete and in an adequate state of conservation. Since the rediscovery of the Mozarabic miniature at the beginning of the 20th century, whose stellar moment was possibly the exhibition of Spanish manuscripts organized in Madrid by the Society of Friends of Art in 1924, a multitude of studies have been carried out on the Blesseds, by researchers in the categories of Gómez Moreno, Camón Aznar, Díaz y Díaz, Neuss, Sanders, Willians or P. Klein among others, in which they analyze both the texts and the characteristics of their illustrations and the different artistic styles of their illuminators, as well as the different influences that can be found in them. Since a detailed study in these areas is outside the scope of this work, we include below a brief summary of our findings in each of them, indicating on our Bibliography page the titles we can recommend to expand this information.

Although they all respect the structure of the original, in relation to its text three families of blesseds are distinguished, for which the nomenclatures I have been used, IIa and IIb, based on a theory which assumes that Blessed himself created three different editions of the Commentaries, the first in 776 and the other two in 784 and 786 and whereas the first two give rise to the family I, 786 to IIa and that a subsequent modification of IIa would generate branch IIb. Other authors, still respecting the classification, consider that all the codices of the Blesseds start from a single prototype, practically completed in the year 776 and concluded by the monk of Liébana in 786, of which successive copies from 776 gave rise to different textual families. This second option seems to us more likely since it is difficult to think that in the years in which the last two versions are dated, when Blessed was in full dispute with Elipando, which would last until the council of the year 792, could devote himself to writing new versions of such a vast work that had ended almost ten years earlier. According to this classification, generally accepted regardless of the theory adopted on the origin of these families, the distribution of the blesseds known so far -using in each Blessed its name of most habitual use and indicating its current situation and the approximate date of its completion- would be the following: