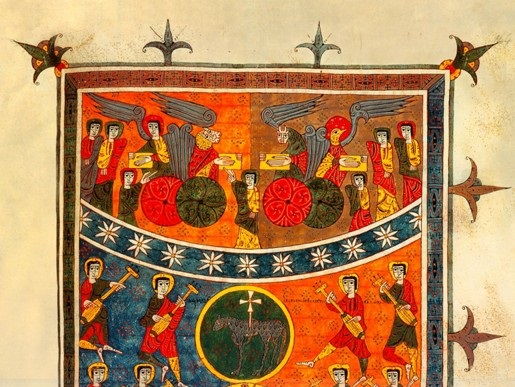 To Jean-Luc Morrenet who provided us with all the images of this codex, obtained from the digitized version of the original of Blessed Silos, after a great cleaning work to include them in his book dedicated to Blessed Silos. 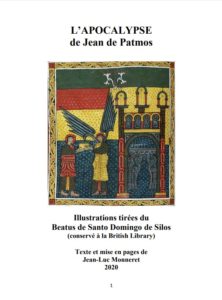 * 106 miniatures decorated with gold and silver.

Study of the Blessed of Silos by our collaborator Jean-Luc Monneret in which all the images of the manuscript have been digitally cleaned. Click the image to access.

The Monastery of Silos, of Visigoth origin, disappeared during the Arab invasion but was re-founded in the time of Fernán González, 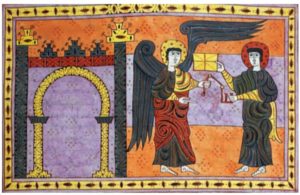 Although suffering the razias of Almanzor its activity decays until in the middle of the XI century it was named abbot Santo Domingo that, with great support of Fernando I, returns the monastic impulse to the abbey. After his death he was immediately canonized and his successor, Fortunio, changed the name of the monastery in honor of the Holy Abbot and built the Romanesque church, the cloister that is still preserved and the monastic dependencies.

It was at that time that a library was started that currently contains more than 140,000 volumes and reactivated an important desk that in that period created codices as relevant as the Silesian Glosas, the Etimologies of San Isidoro and this Blessed, one of the most interesting copies of the Commentary on the Apocalypse of Blessed Liébana that have been preserved, written in the time of Abbot Fortunio by calligraphers Domingo and Muño and finished illuminating in 1109 by Prior Pedro.

The manuscript was still in Silos in the fourteenth century, then we know nothing until the eighteenth century when Cardinal Antonio de Aragón donated it to the College of San Bartolomé de Salamanca, from which it was transferred to the National Library, from where José Bonaparte took it to sell it in 1840 to the British Museum, where it is still preserved.

It is surprising that in the monastery of San Sebastian de Silos, of Visigoth origin and which had a great importance in the tenth century, strongly supported by Count Fernán González, there is no intention to create at that time his own copy of the Commentary on the Apocalypse of Beatus of Liébana, when copies proliferated in other monasteries of Castile and Leon. 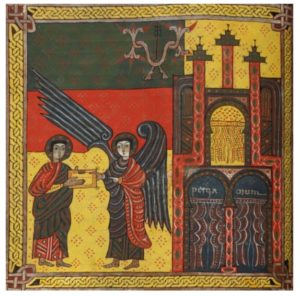 However almost two centuries later, in the same monastery although it was already called Santo Domingo de Silos, after the death of the Saint who had been the architect of a new epoch of splendor, an important effort will be devoted to creating one of the most beautiful and luxurious blesseds of those who have come to this day, coinciding with the construction of the Romanesque monastery, with the strengthening of its library, one of the most important in Spain and with the substitution of the Mozarabic rite for the Roman rite in the monastery, a time when the Apocalypse loses almost all the importance it had in the Visigoth liturgy. In fact its preface states that its objective was not the liturgical use, but the study of the text by the monks.

Commissioned by Fortunio to Nunnio and Dominicus, two monks of Silos who finished in 1091 the copy of the texts, leaving the spaces for blank images, which were not added until many years later – was finished in 1109 on the same date Alfonso VI died by the prior and miniaturist master Pedro.

The Blessed of Silos begins with four pages of an ancient Visigoth antiphony and includes not only the complete cycle of illustrations of the Apocalypse and the Book of Daniel but also eight pages dedicated to the offices of the deceased and a very special vision of Hell. It belongs to the Family Iia of the Blesseds, in which are also included codes as important as those of Escalada, Valcavado o Fernando I among others. 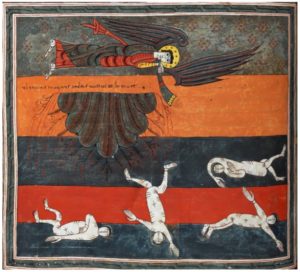 It is a sumptuous codex, written with a magnificent calligraphy in lowercase Visigoth script in which the Carolina influence is already recognized and with 106 miniatures of very vivid colors and decorated with gold and silver, in which the most beautiful colour range of all the Blesseds is used and the style of the miniature of San Millán de la Cogolla is recovered, based on the use of different combinations of four colours such as red, dark blue, dark green and yellow or blue, clear, light green, salmon and orange, with great fidelity to the structure of the previous blesseds and to the contents of their images, but already in totally Romanesque style, although as a sign of respect for tradition it maintains horseshoe arches, a common feature of earlier Mozarabic manuscripts.

In fact, in this blessed we find both the influences of the 10th century miniature, as well as the new European currents and a certain classicism, but in all this highlights the Mozarabic influence, with an important Muslim component in the laceries of the decorated frames and in many other details.

The codex seems to have been little used because it is complete and in magnificent condition.

With a perfect balance between the spirit of the first Mozarabic Blesseds and the modernity that both represented Gregorian reform and Romanesque art, this Blessed is one of the most interesting and best preserved Blesseds, which offers, in addition to a high quality both of the calligraphy of its texts, in which the Visigoth letter is preserved although in it the arrival of the French Carolina is already observed as in its miniatures, already in the Romanesque style but with full respect for the first blesseds of which the structure of the images within the text is preserved, as well as the compositions of each scene and, something really interesting, although the horseshoe arch had disappeared from architecture at least a hundred years earlier, in the blessed is conserved this type of arch as well as the Muslim component of the Mozarabic manuscripts of the X century 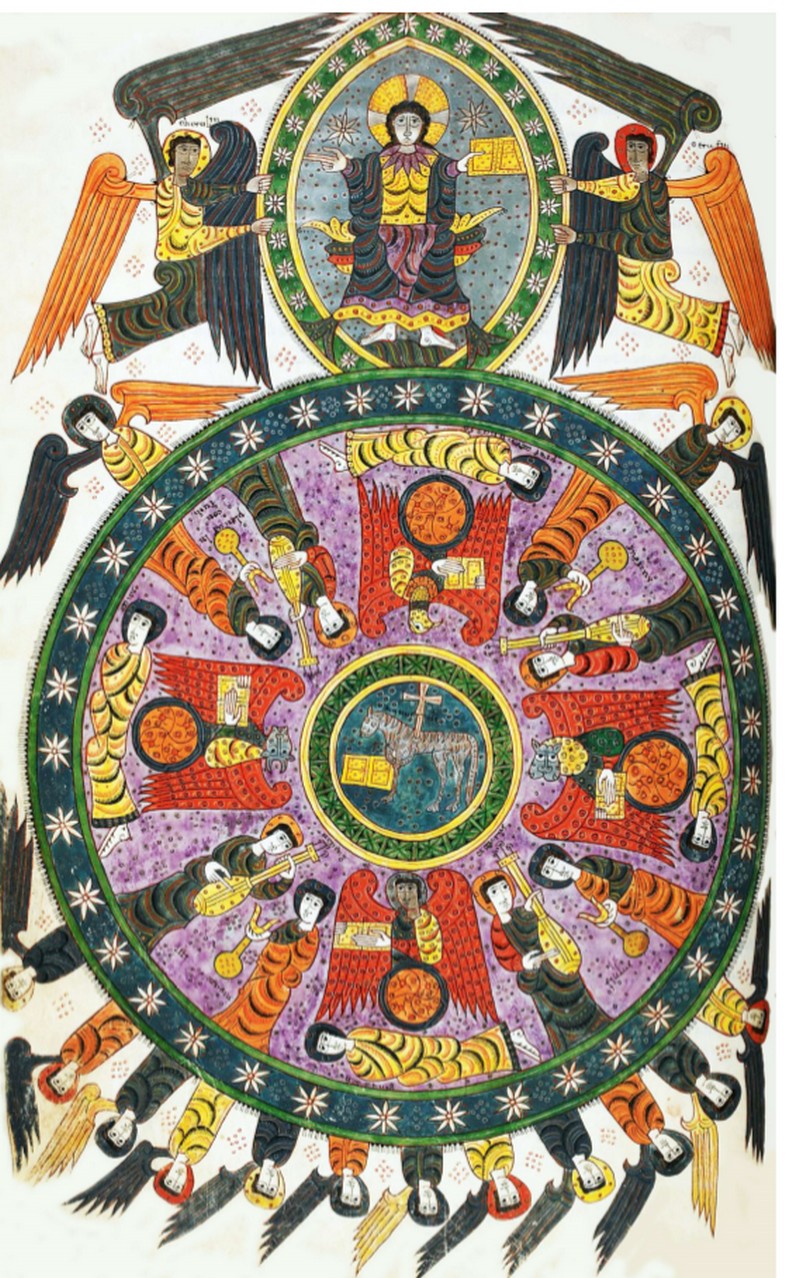 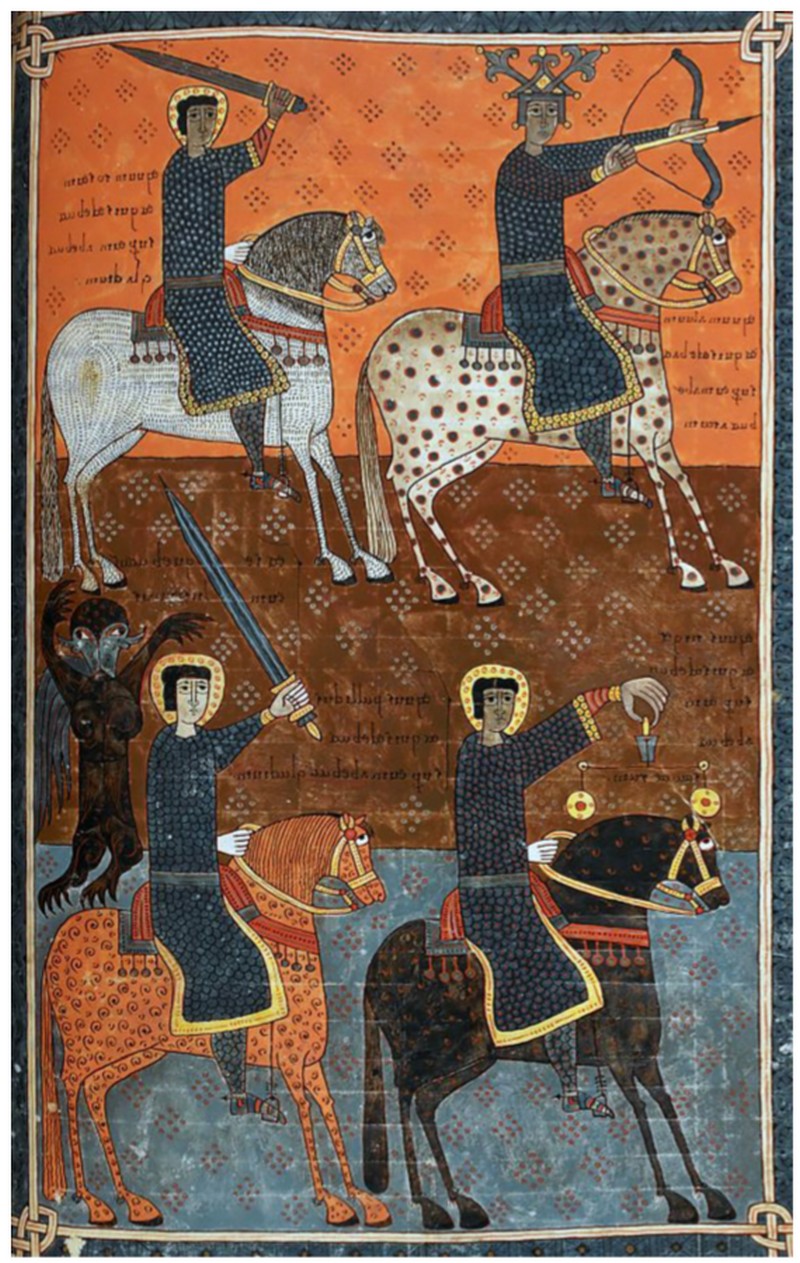 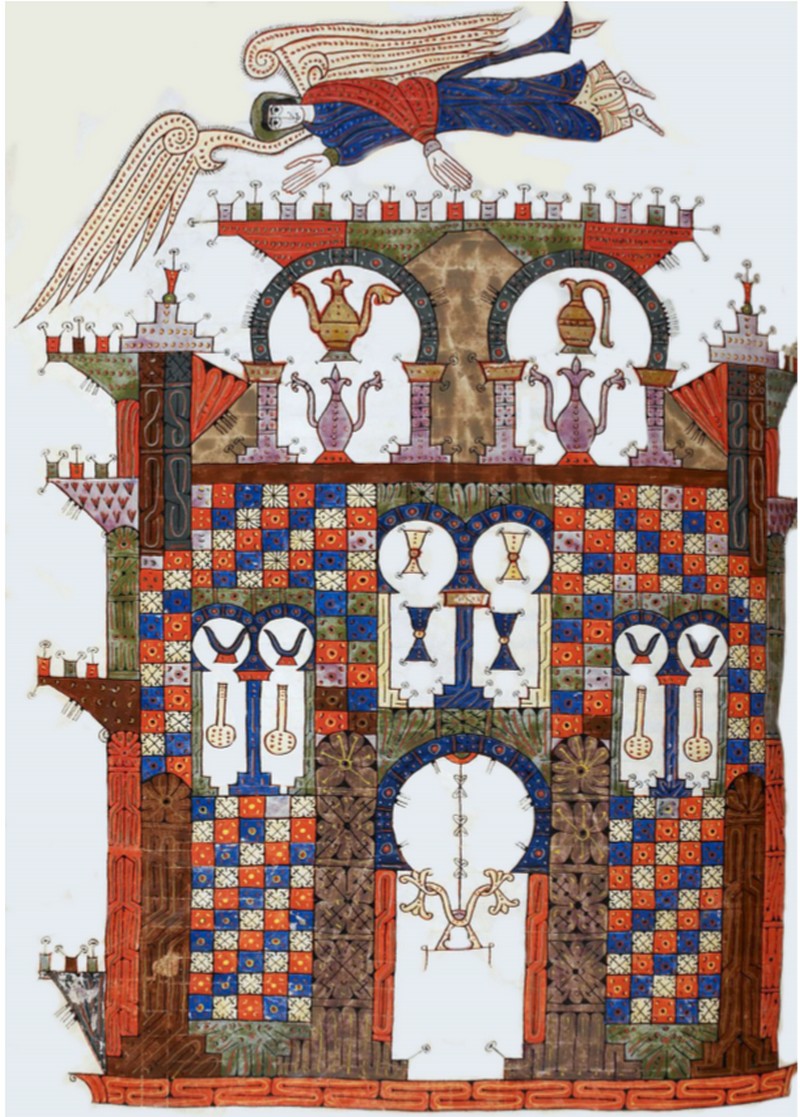 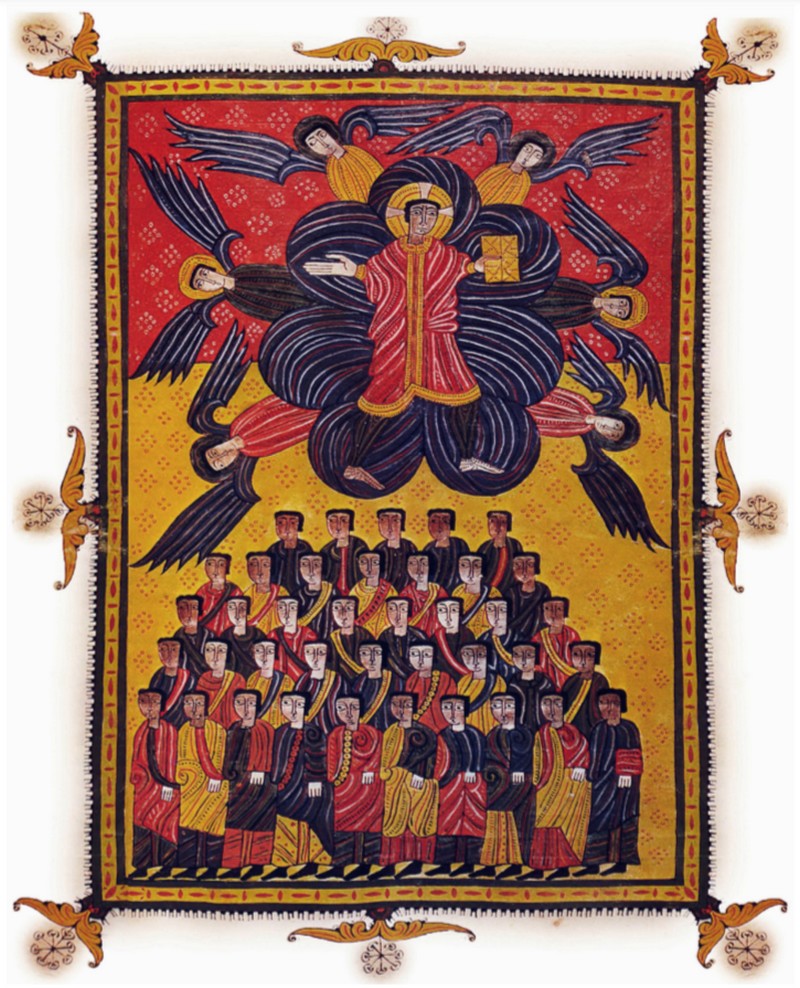 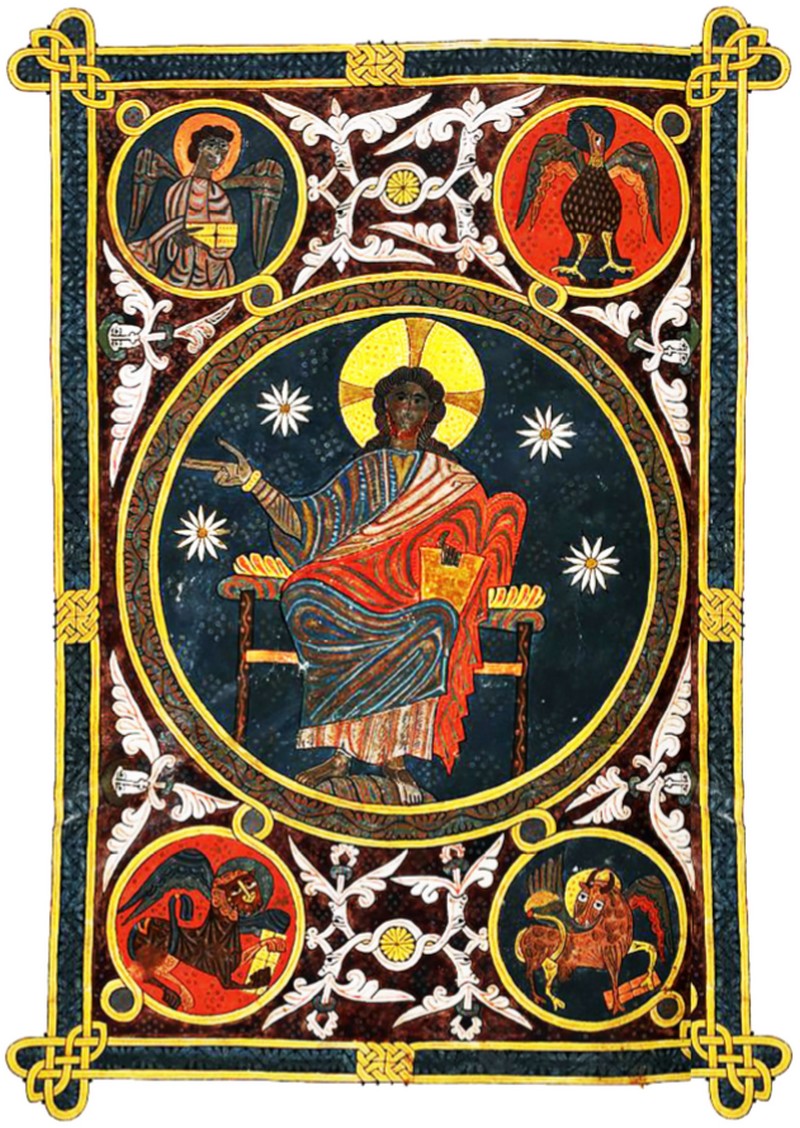 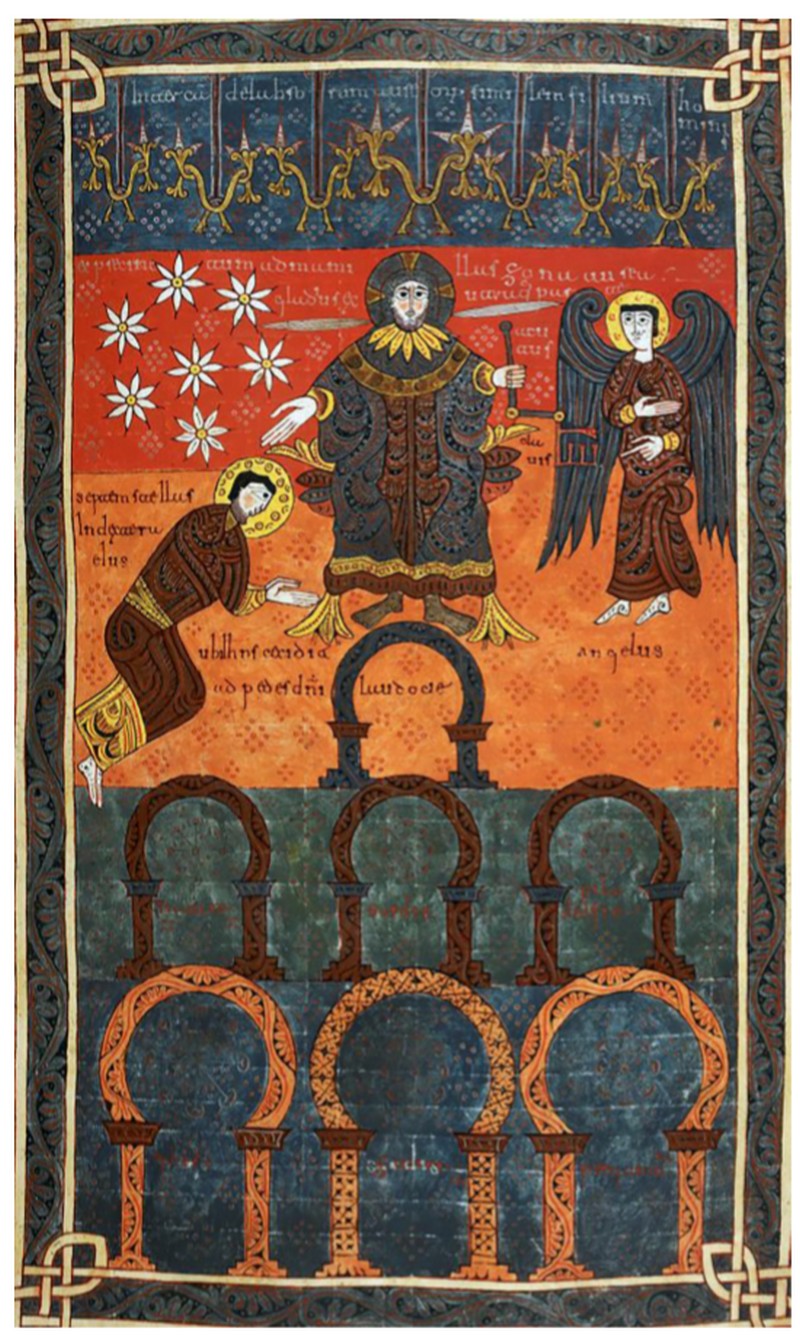 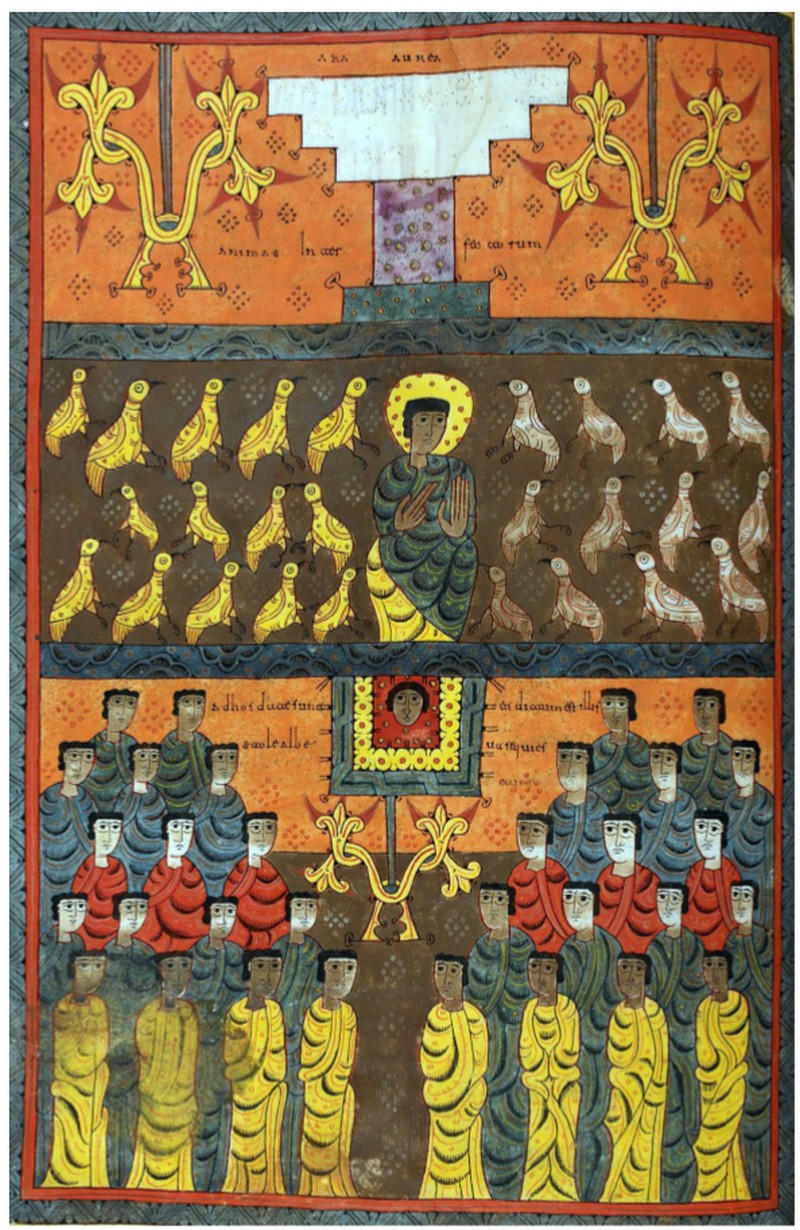 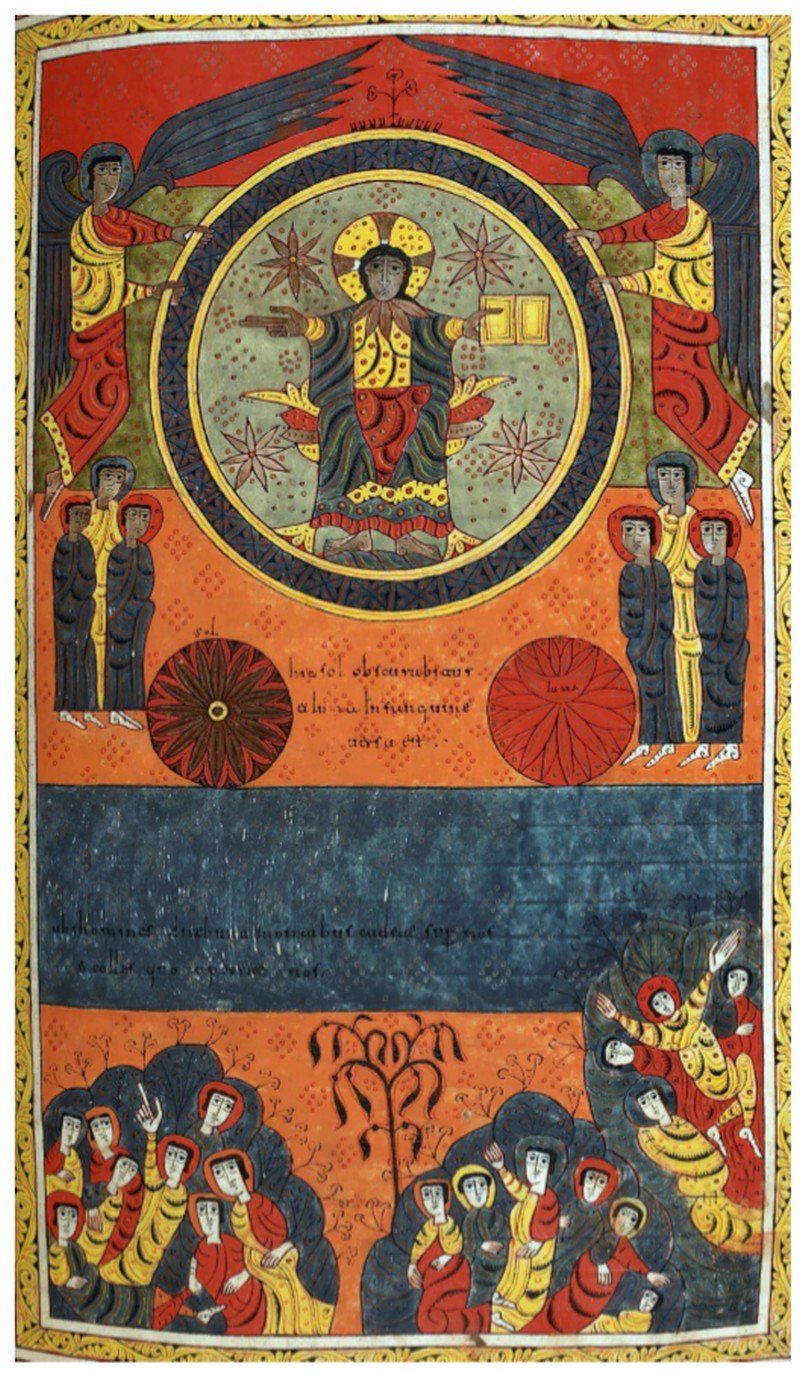 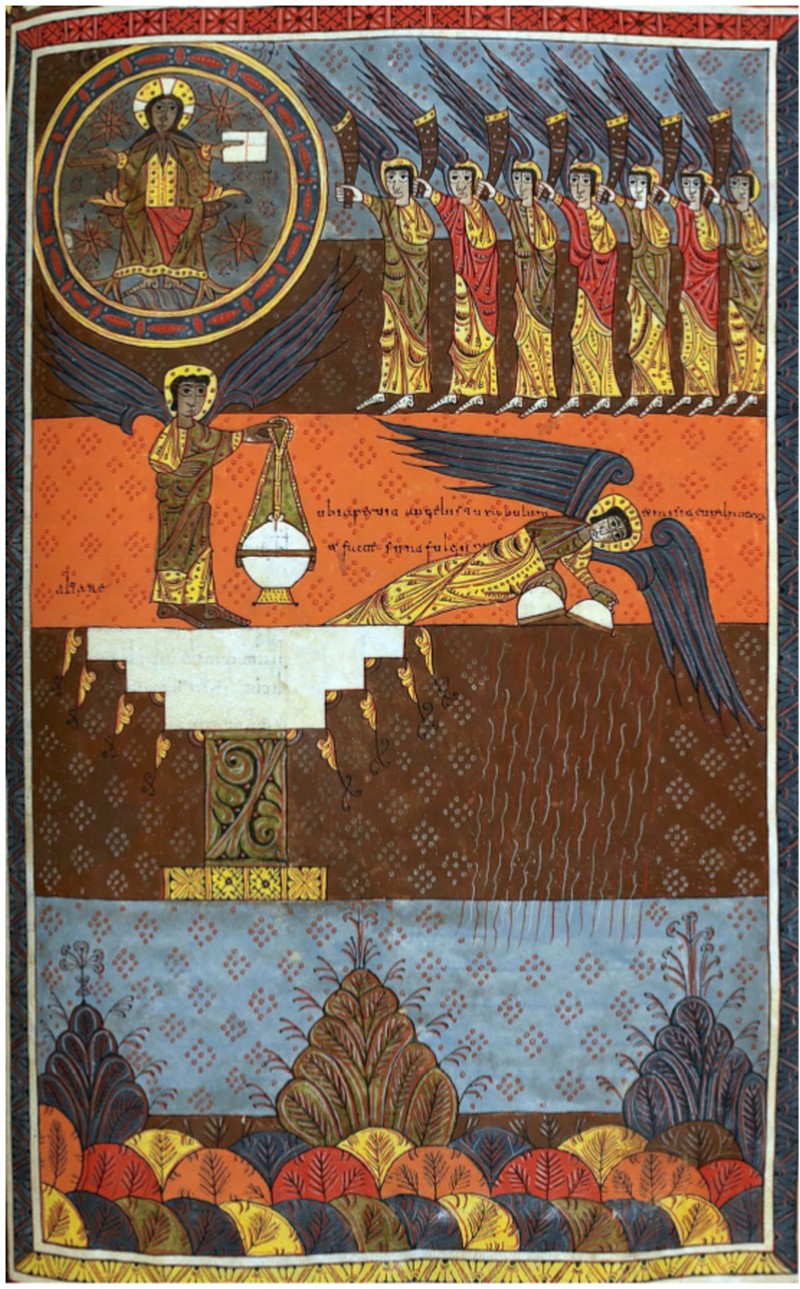 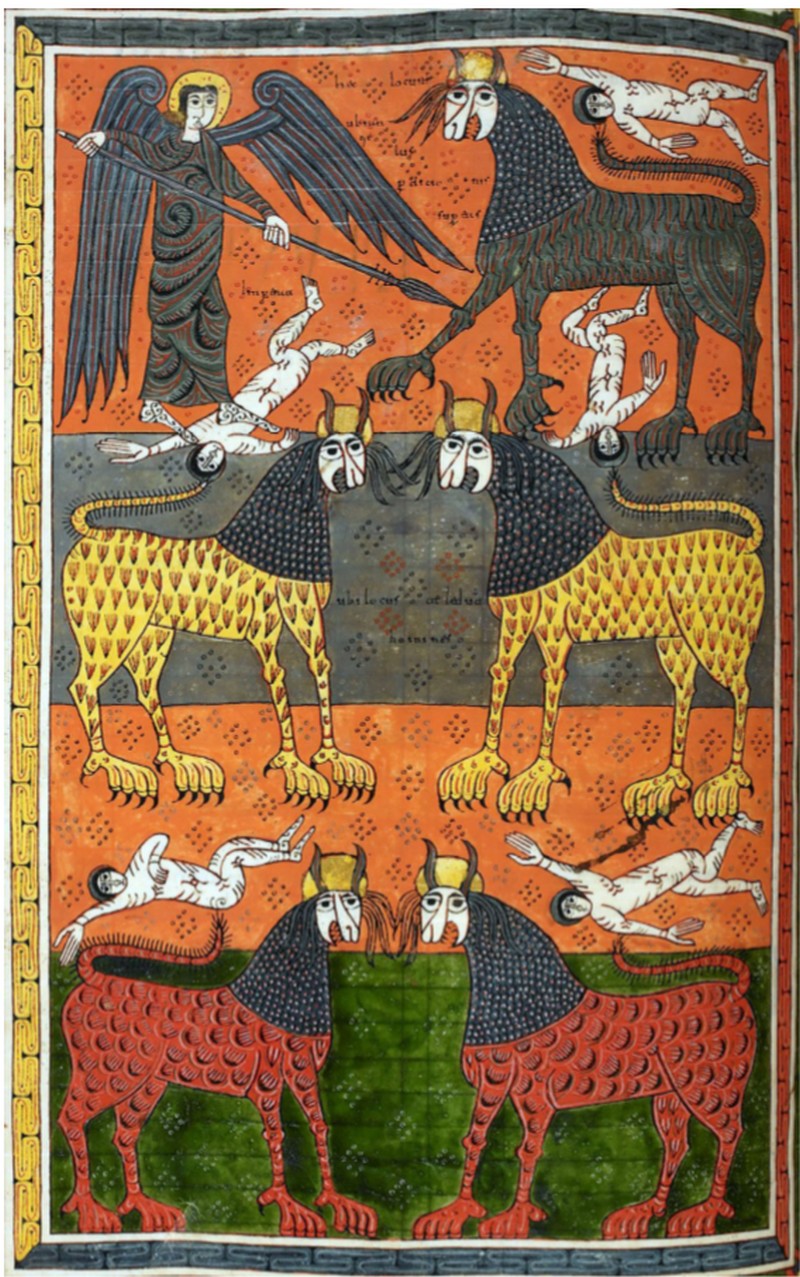 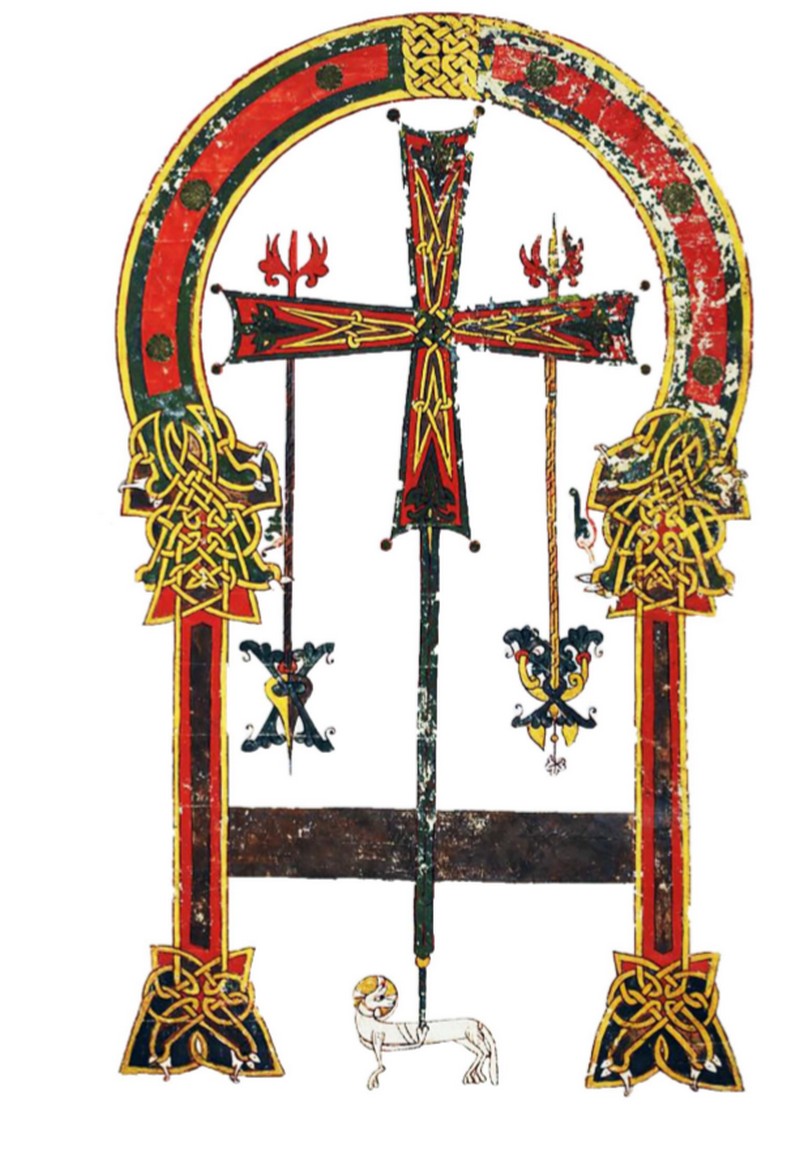 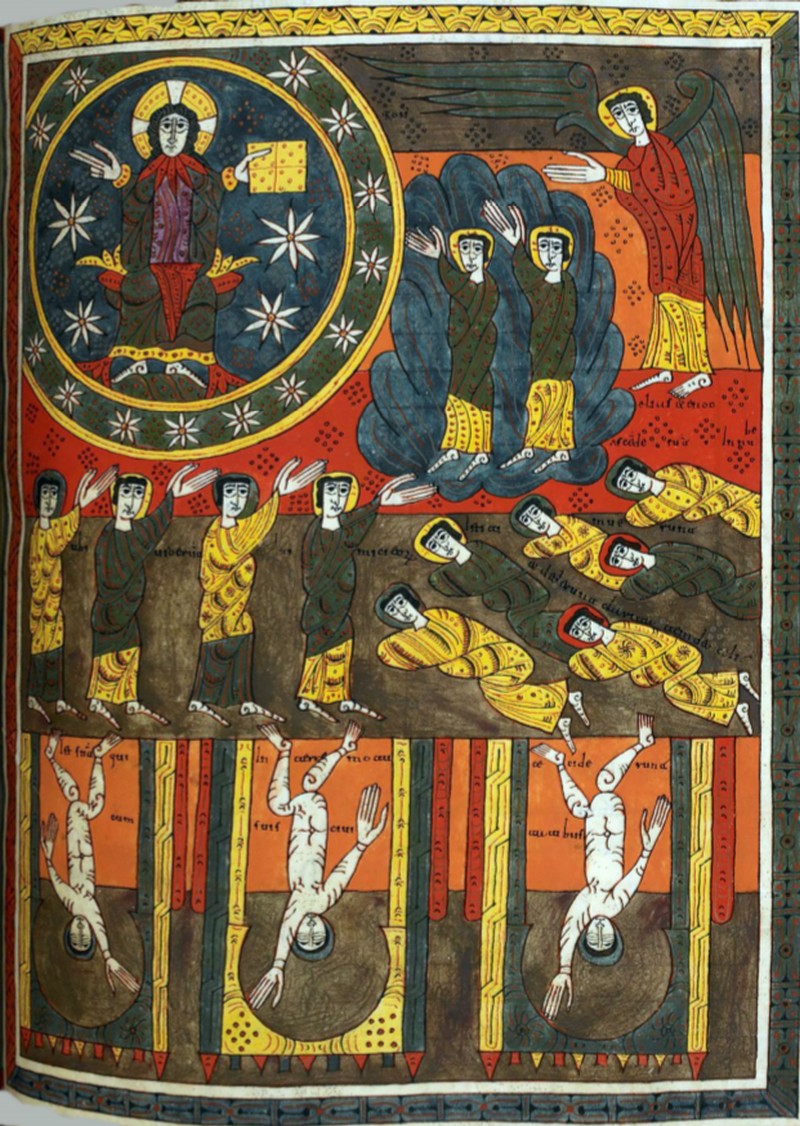