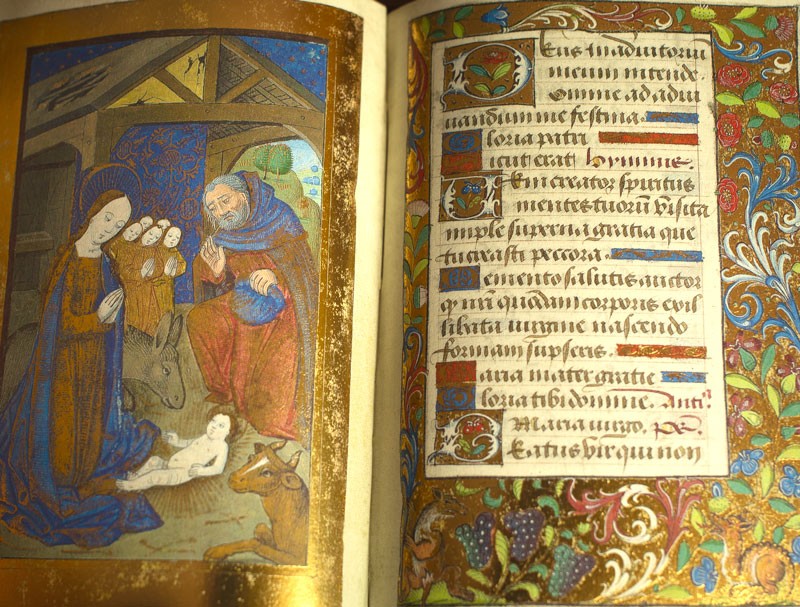 Simon Bening was a 16th century Flemish painter, one of the main representatives of the Ghent-Bruges school, considered to be the last of the great Flemish illuminators and one of the greatest innovators and responsible for the rise of the Flemish miniature. 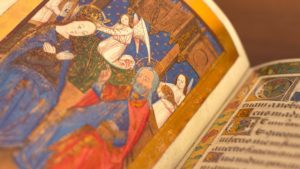 Flanders in the 16th century. He was also a renowned altarpiece painter, who created books for German rulers such as Cardinal Albert of Brandenburg and for royalty such as Emperor Charles V and Don Ferdinand, Infante of Portugal.

His speciality was the illumination of books of hours and he also created family trees and portable altarpieces on parchment so that some of his best works belong to the works of the months, miniatures included in the books of hours..

The 1530s and 1540s was a period in which Bening received commissions from members of aristocratic families such as Mencía de Mendoza, Marquise of Zenete and widow of the chamberlain of Charles V, Enrique III of Nassau, who commissioned two books of hours from him.

This manuscript, which is in the Abbey of Monserrat, although some of its folios, which were torn and are in the Paul Getty Museum in Los Angeles and in the Munich State Library, was made in Ghent between 1535 and 1540, in a period in which Simon Bening maintained a close relationship with Alonso de Idiaquez, founder of the monastery of San Telmo and member of the court of Carlos V.

It is known that the manuscript was in Spain since 1578, by an inscription made by Agustín de Orbaneja, prior of the monastery of San Telmo of the order of preachers, who analyzed it and found no errors or annotations against the faith. At this time, the codex could have passed from the San Telmo de San Sebastián monastery to the Benedictine abbey of Montserrat, although there is no conclusive evidence of when that transfer took place. 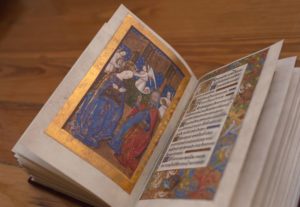 The Munich-Montserrat Book of Hours is a sumptuous manuscript, with 221 folios all magnificently illuminated, either full-page, or with beautiful floral decoration inhabited by hundreds of plants and capitular letters with gold. The precious calendar that opens the book is considered by medieval and Renaissance miniature specialists to be the second most important cycle of images of the months of the year after “The Very Rich Hours of the Duke of Berry”.

In it Bening shows his virtues as a landscape painter, which he demonstrates in the Munich calendar, originally part of the Montserrat manuscript. Bening here demonstrates his mastery, emphasising his interest in depicting distant distances, and his poetic inclinations through broad landscapes that evoke the changing seasons and topographical or climatological particularities, reflecting Simon Bening’s interest in landscape during the 1530s, depicting not only terrestrial and typographical aspects but also atmospheric, temporal and lighting conditions.

The interest in landscape appears not only in the Calendar, but also in the full-page miniatures and in the historiated margins. It can be seen in many of his images, among which we can highlight some very special ones such as a series of representations located in the Suffrages of the saints, for example the miniature dedicated to Saint James the Greater, turned into a walker towards Finis Terrae that is integrated into a rugged coastal landscape, bathed by a sea surface furrowed by sailing ships in which the apostle is represented as a bust 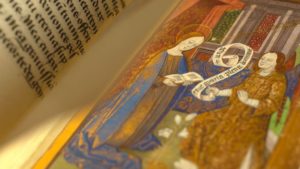 dressed with a veil, the pilgrim’s staff and the crossed scarlet on a scull, while he reads the book that testifies his evangelising mission in the territories of the ancient Hispania.

Another example might be the atmospheric density conveyed by the wooded, damp landscape that returns to St John the Baptist, as it does in the image of the same saint depicted by Simon Bening on a loose folio, corresponding to the second volume of a book of hours that belonged to Cardinal Albrecht of Brandenburg.

In other respects his style is relatively unevolved from what was being done years before his birth, but his landscapes are a link between the 15th-century illuminators and Peter Brueghel. 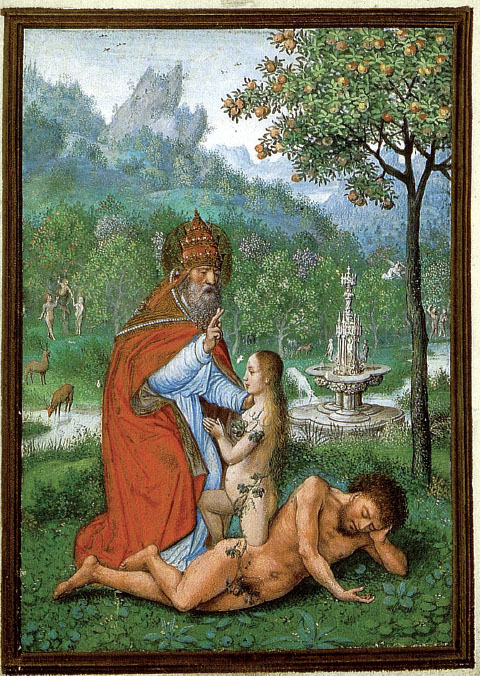 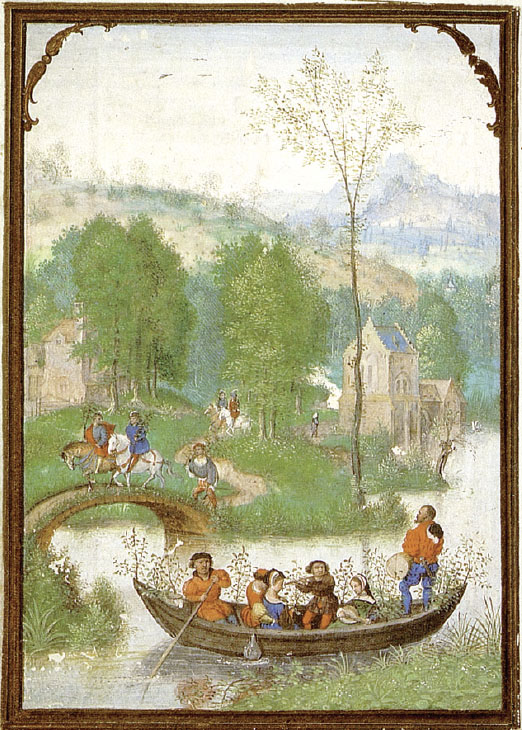 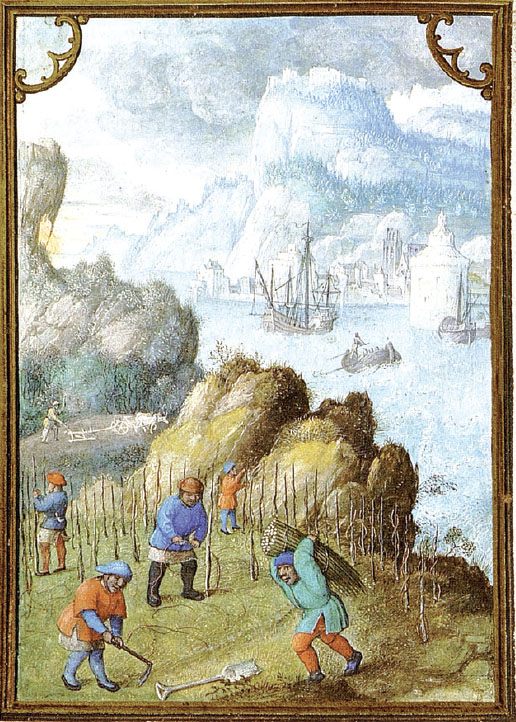 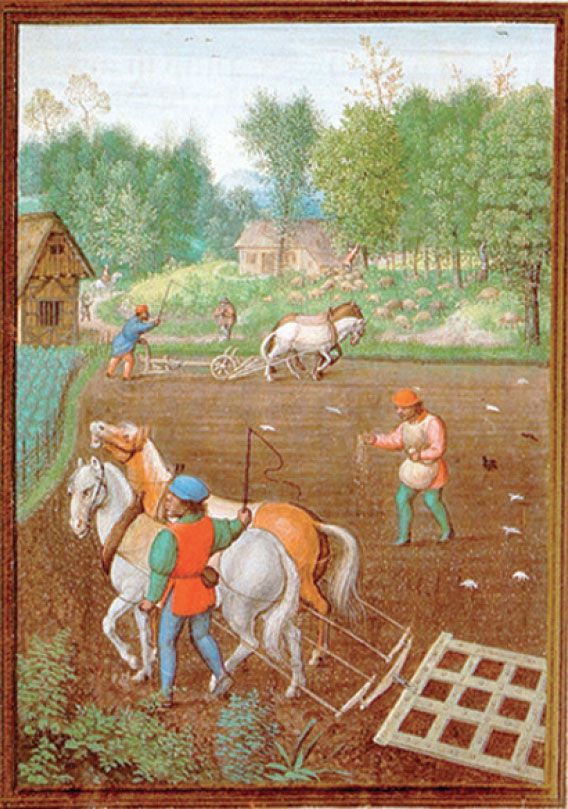 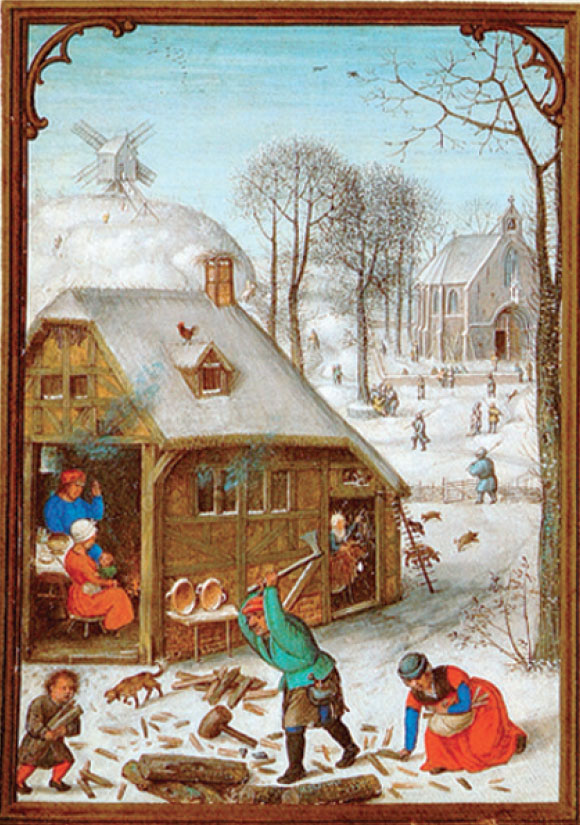 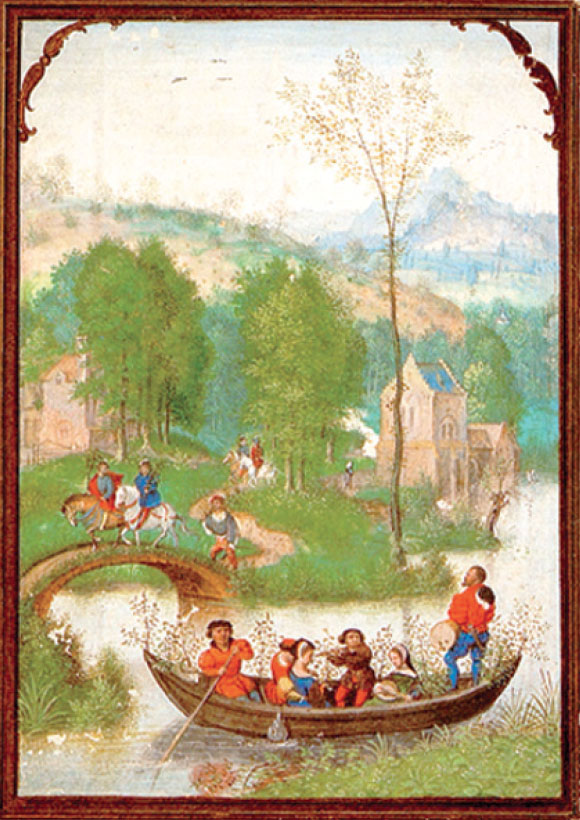 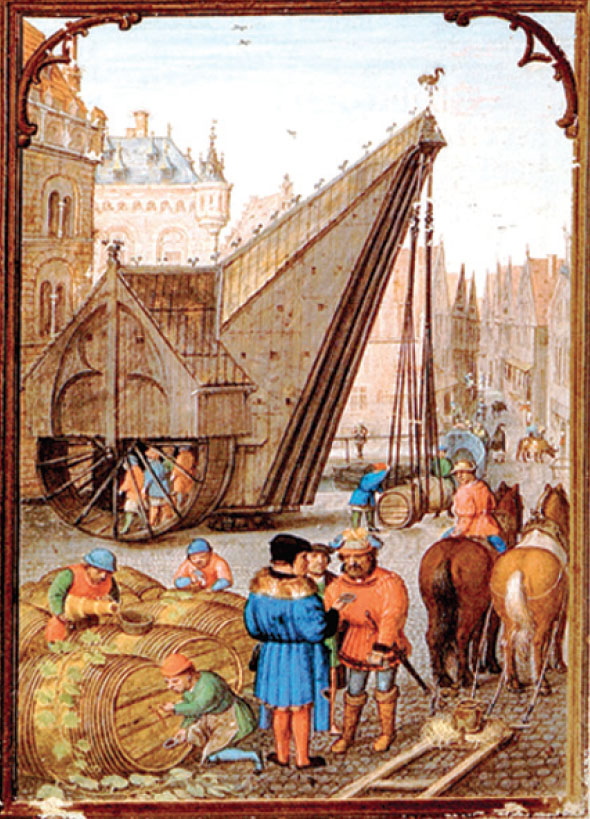 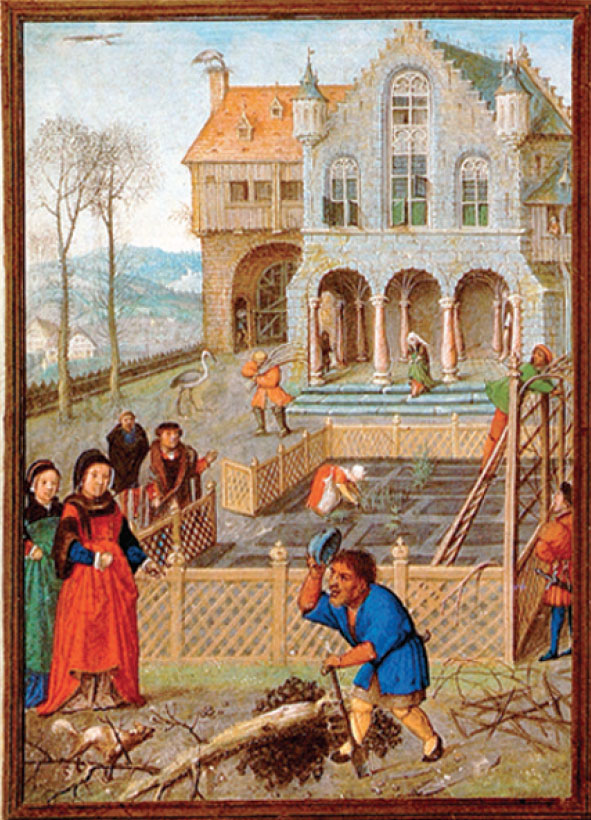 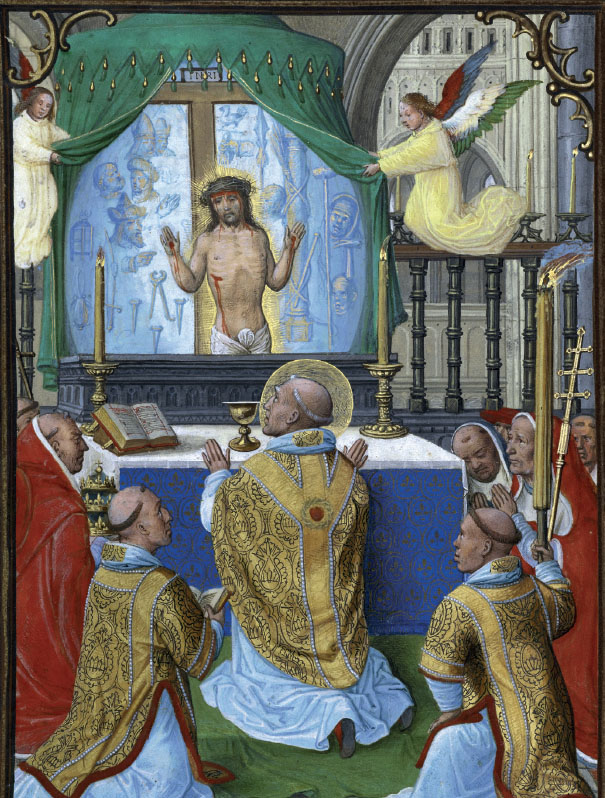 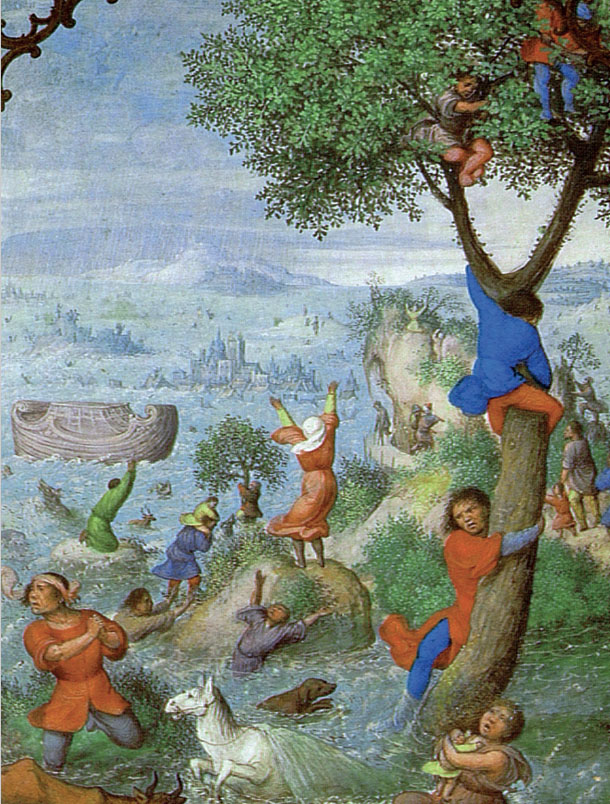 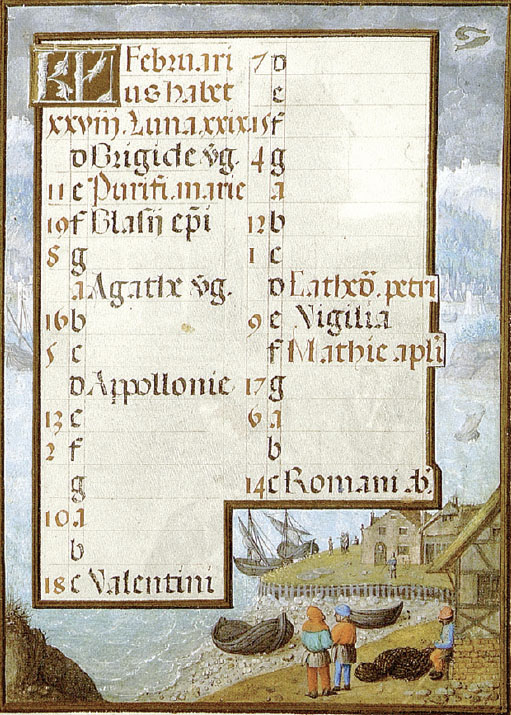