Writer, founder of monasteries, professor at the University of Paris, promoter of a crusade and creator of a logic machine he called Ars Magna, Ramon Llul was one of the most advanced figures of the 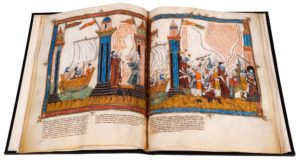 spiritual, theological and literary fields of the Middle Ages with more than 250 works written in Latin, Catalan and Arabic.

Born in Mallorca in 1232, he was the son of an important Catalan family who after a first period in which he was a successful courtier, At 30 he had visions that led him to abandon his wife and children to dedicate his life to an apostolic project of high intellectual ambition.

From that moment on, according to his autobiography, the fundamental objective of his life was the formulation of a rational tool capable of ‘demonstrating’ the Truth, that is, the God of the Trinity and of the Incarnation who saves man and gives account of the world, that it should serve to convert the pagans to Christianity, which would go through the composition of a book that would serve to attract to the truth those who have not yet found it, so that it should be able to be accepted by those who did not share the same creed, but like him they sought the truth. This truth therefore needed general principles common to all men as a method for converting to Christianity the 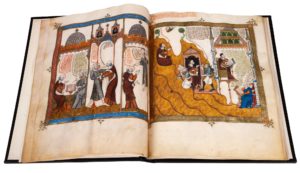 Pagans and for their dissemination founded in the north of Mallorca a school of oriental languages so that the monks who had to go to preach in the lands of infidels could learn Hebrew and Arabic, but mainly to exercise themselves in the method by which to convince other men of religion of their own doctrine.

This tool is described in his Ars Magna, also known as Llul’s method, as a logical machine in which theological concepts are organized by “perfect” geometric figures.

In order to implement his project, which needed the approval of the Church and the support of the Western monarchies and the Italian republics, a fundamental step was the recognition of his teaching at the University of Paris, which allowed him to teach at the Faculty of Arts despite being a layman without a master’s degree. There one of his first disciples was Thomas Le Myésier, canon of Arras and physician at the court of the Countess Mahaut d’Artois, who after the death of LLul compiled four anthologies of his master’s works, of which only two have been preserved: the greatest – e l Electorium, of more than five hundred folios- is kept in the National Library of Paris, and a small -e l Breviculum, very abbreviated version prepared for the Queen of France and containing the magnificent miniatures of the life of Llul, which is preserved in the library of Karlsruhe (Germany). 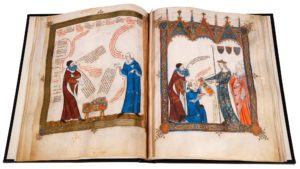 The so-called Karlsruhe codex, known as Breviculum (Llull 1990) which was compiled by Thomas Le Myèsier, is from a miniature codex containing a summary of Llull’s work which, in order to facilitate the understanding of the complex principles of his Art; It includes 12 large-scale illustrations of the Vita Coetánea by Ramón Llull, executed around 1325 possibly by a painter from the court of Mahaut on the initiative of Tomás Le Myésier.

The codex is a schematic compilation of Lullian writings with the twelve miniatures that each occupy a page and in which the life and doctrine of the Majorcan thinker are clearly drawn and explained. All the miniatures are completed with explanatory legends, whose author had to be Le Myésier himself, inserted in high quality drawings one of the best testimonies of 14th century French painting. This way of presenting the images with comments of the characters associated with each figure, in the style of current comics, is exceptional in the miniature of the Middle Ages, since we only find 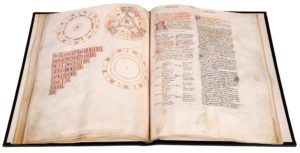 In the part dedicated to the exhibition of the life of Llull, we have a series of 14 illuminated miniatures in some of which his visions are presented, which already constitute a first level of interpretation of the text of the Vita. But the core of the pictorial cycle is formed by the illustrations that expose the Lullian philosophical system, with allegories of Lulius, at the head of an army blessed by God, Averroes and Aristotle, subjects that at that time were debated at the University of Paris.

Both its content and the quality and special structure of its images make Breviculum an exceptional manuscript from any point of view.

Iluminador: Muralisate painter from the northwest of France or Flanders 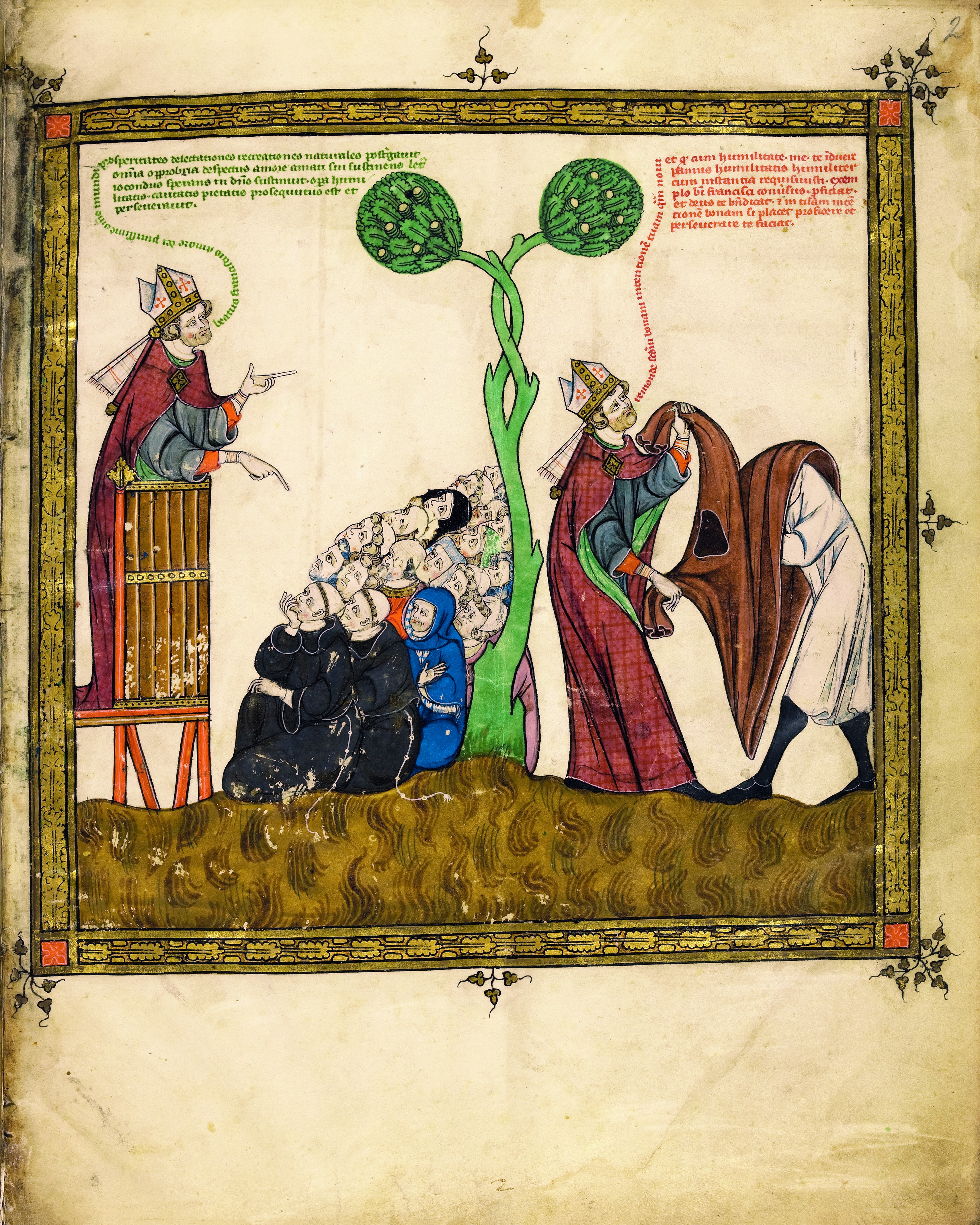 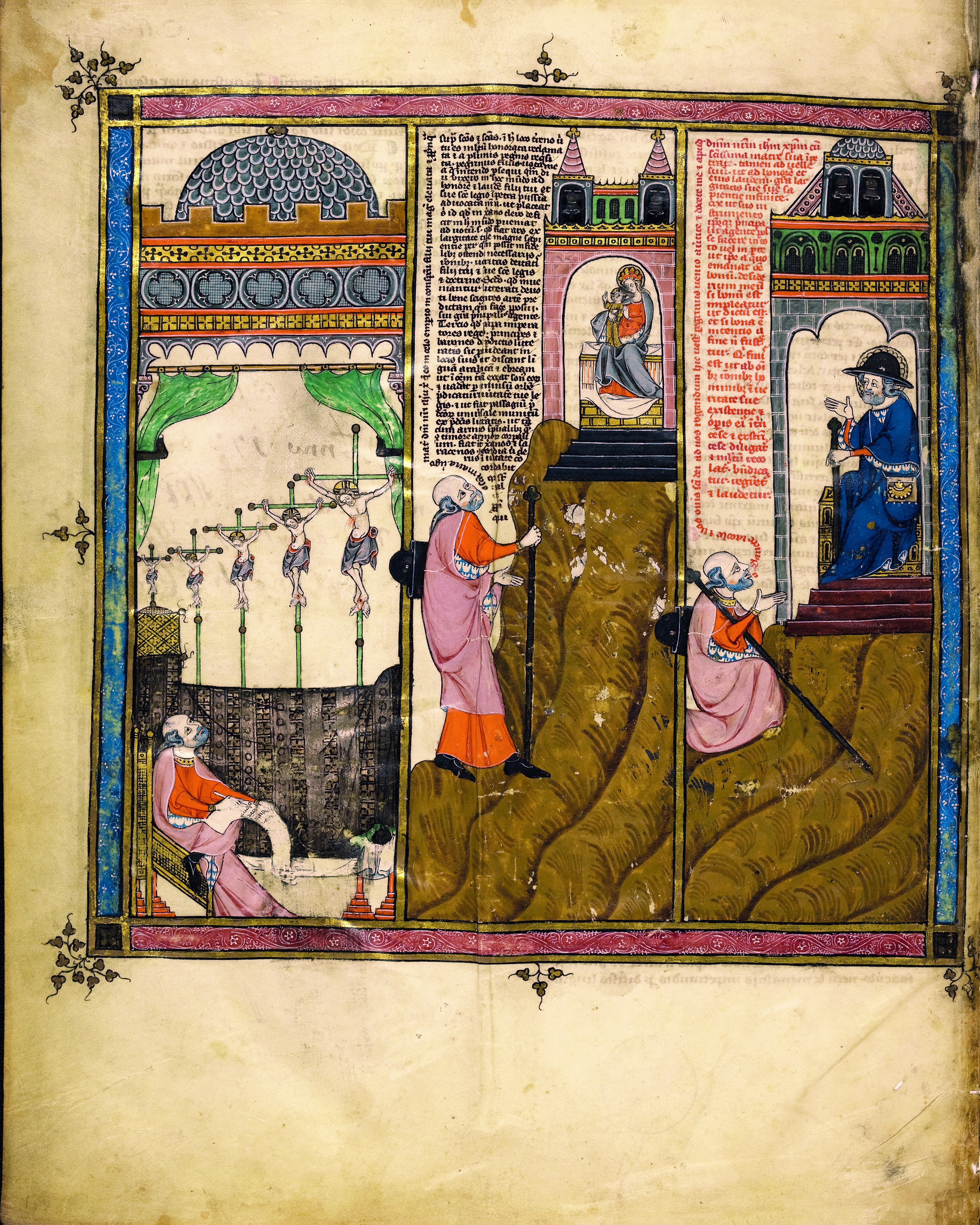 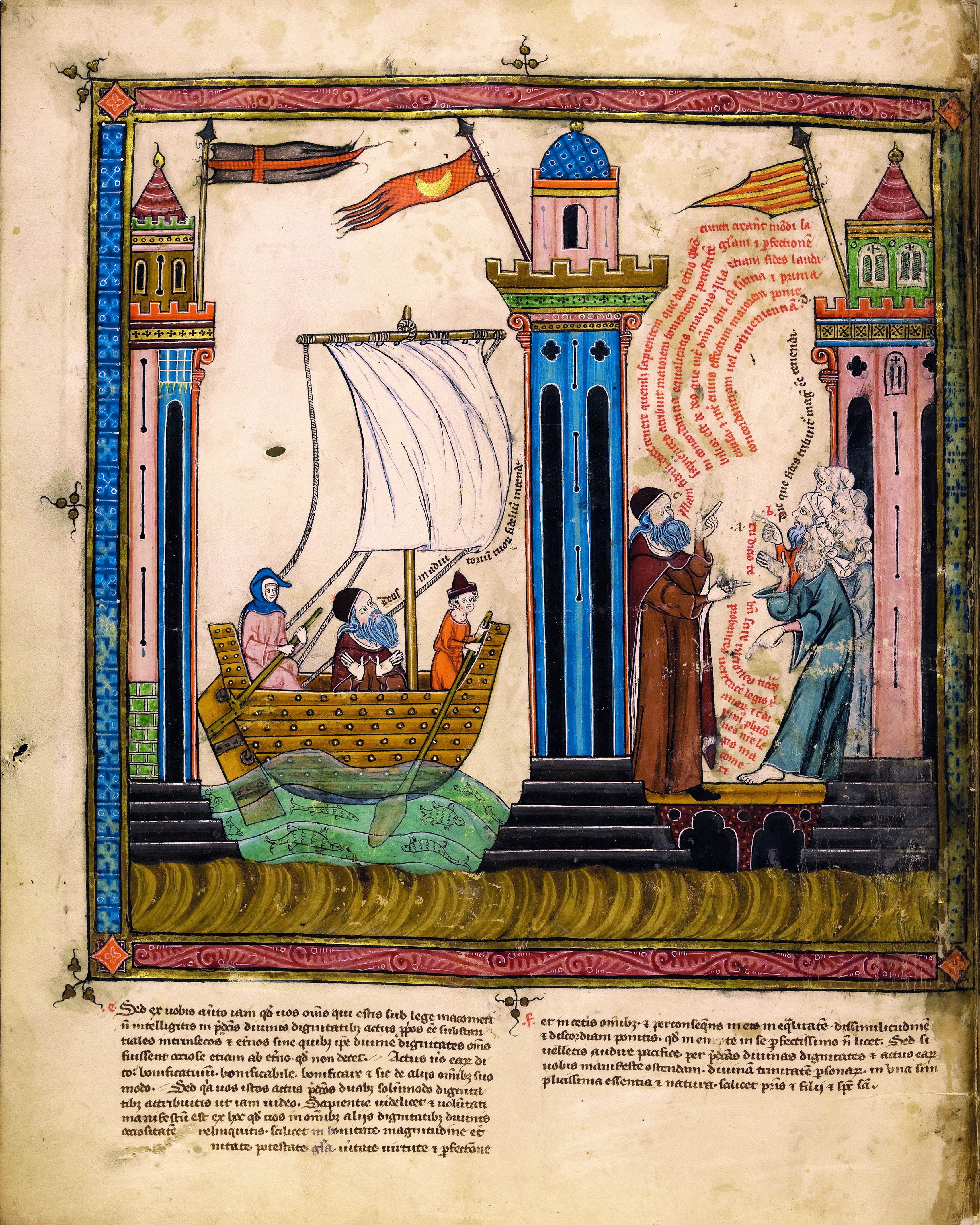 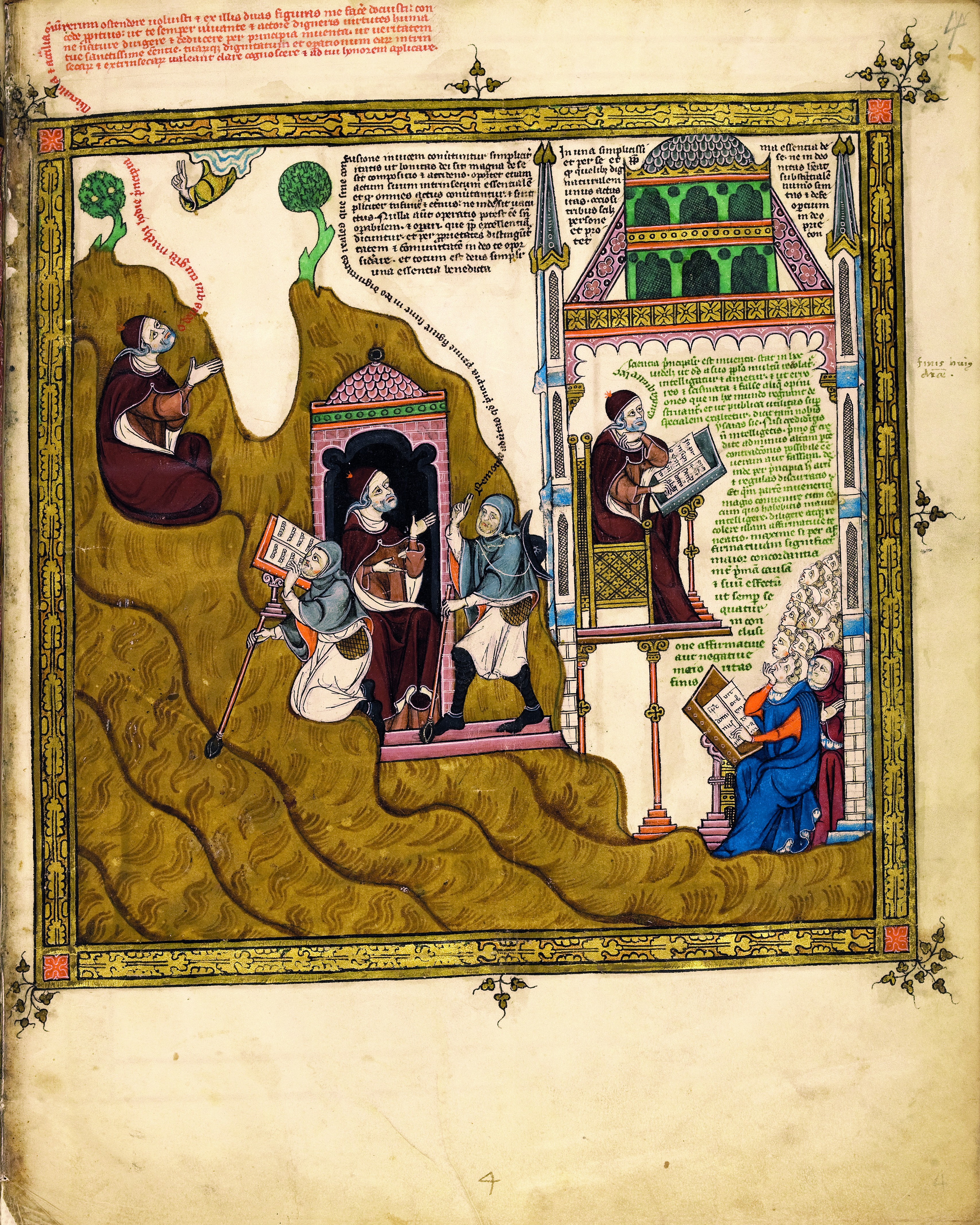 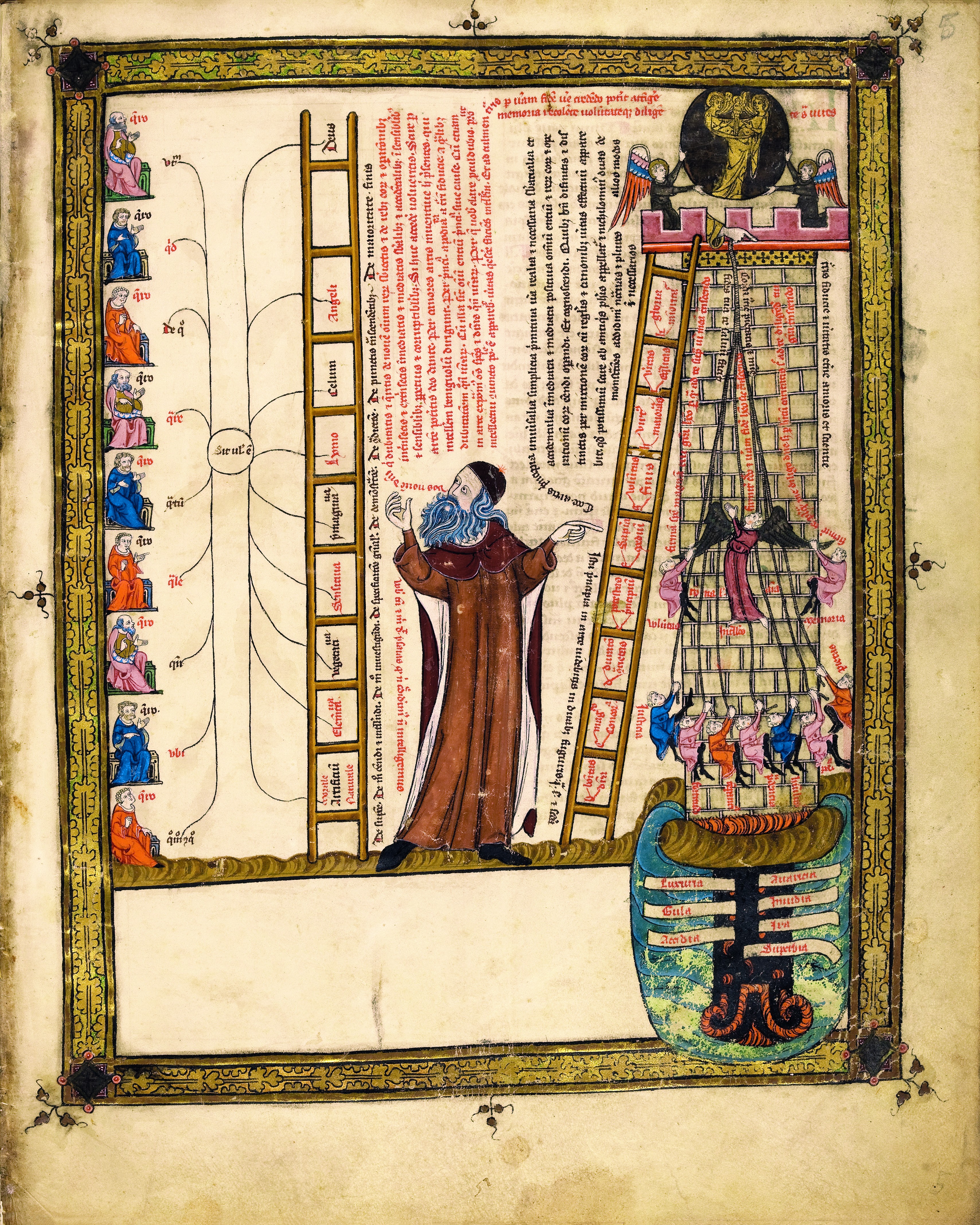 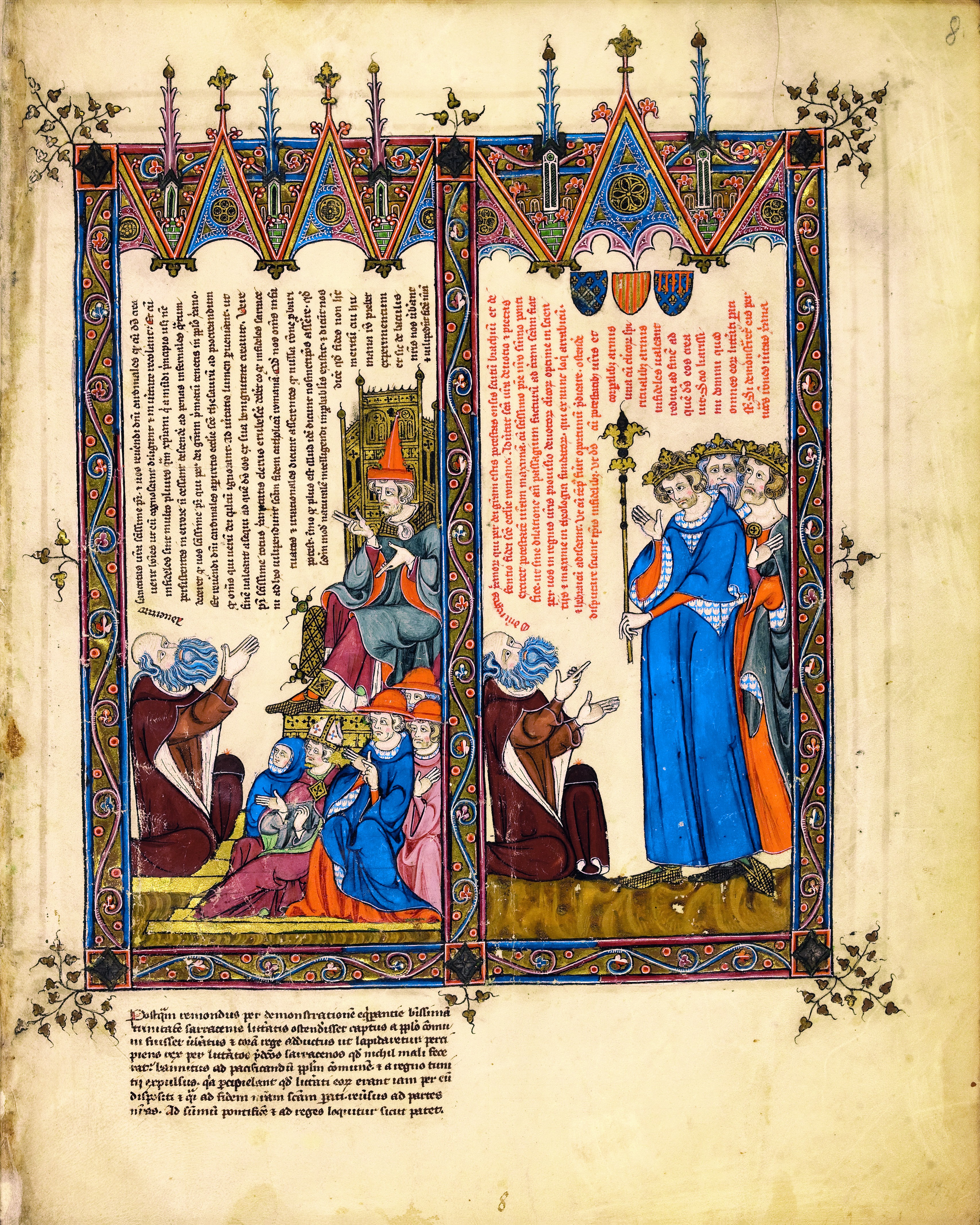 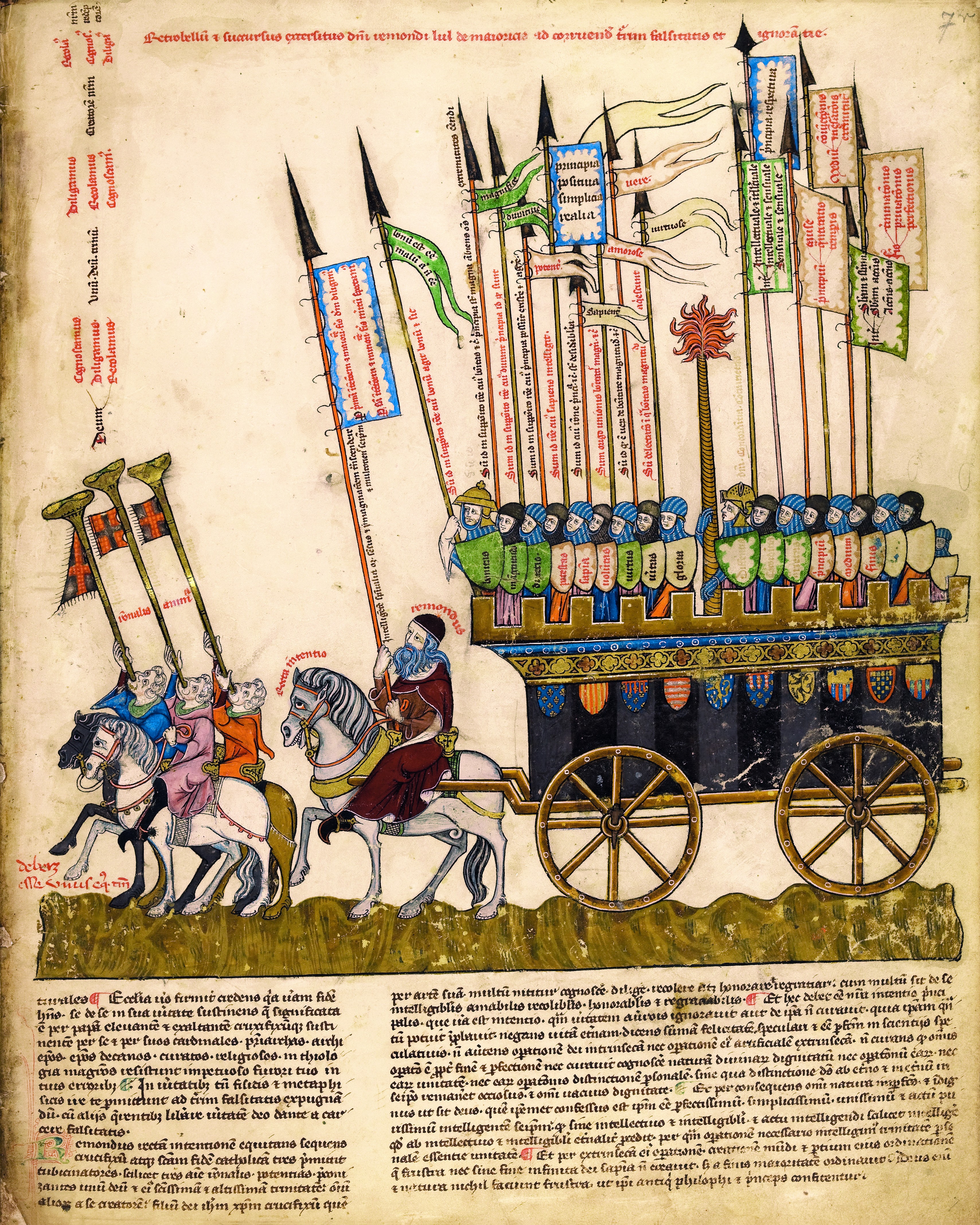 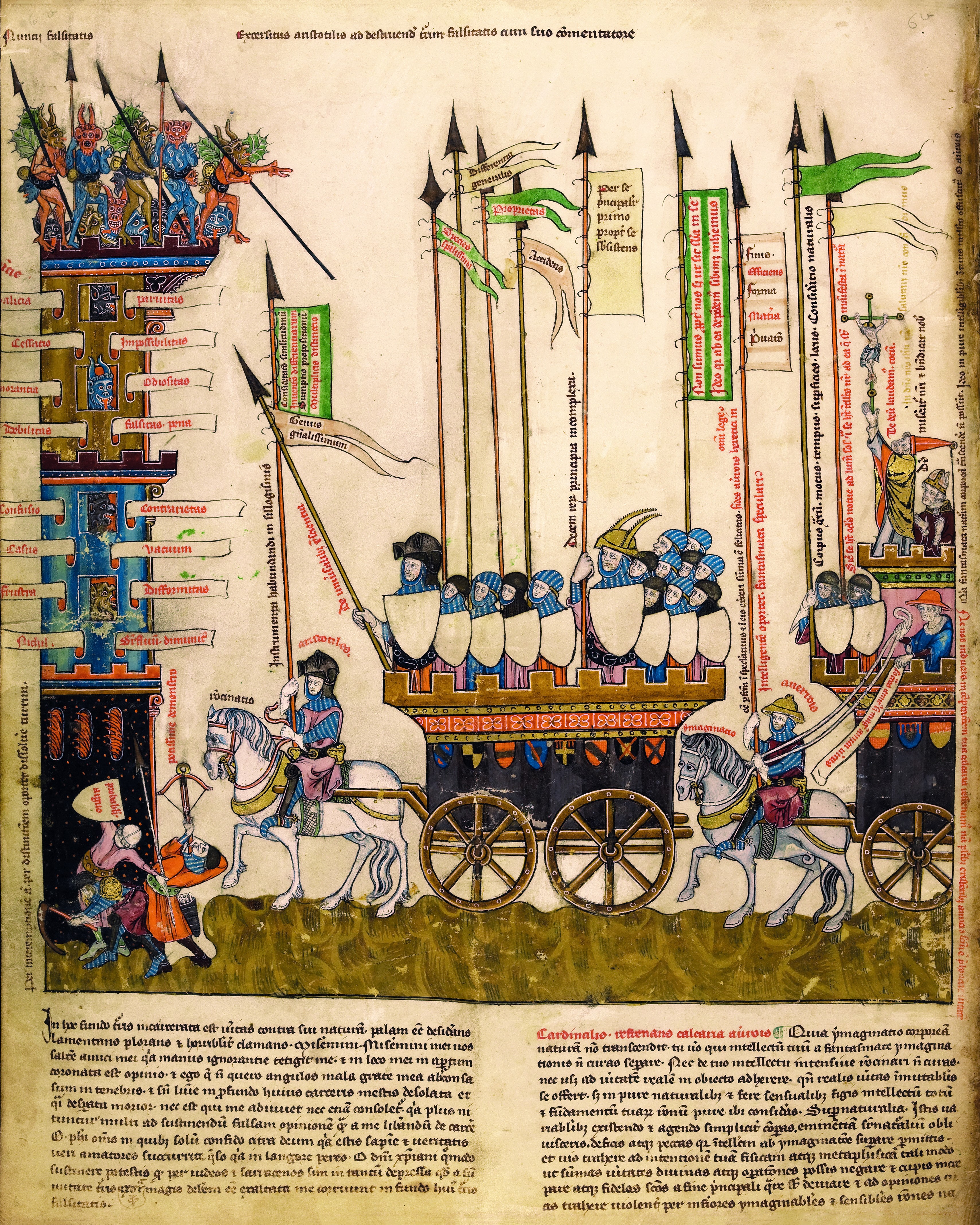 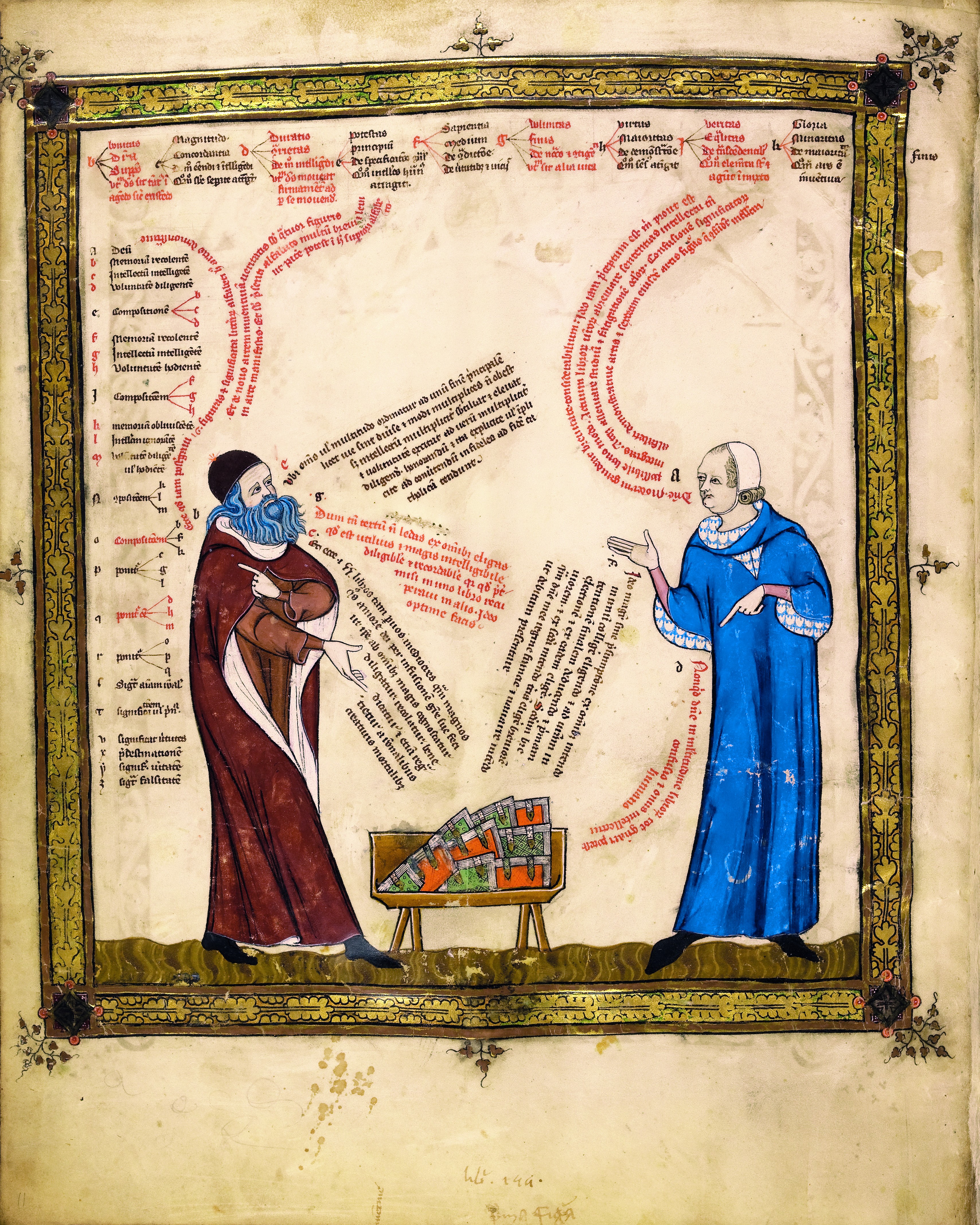 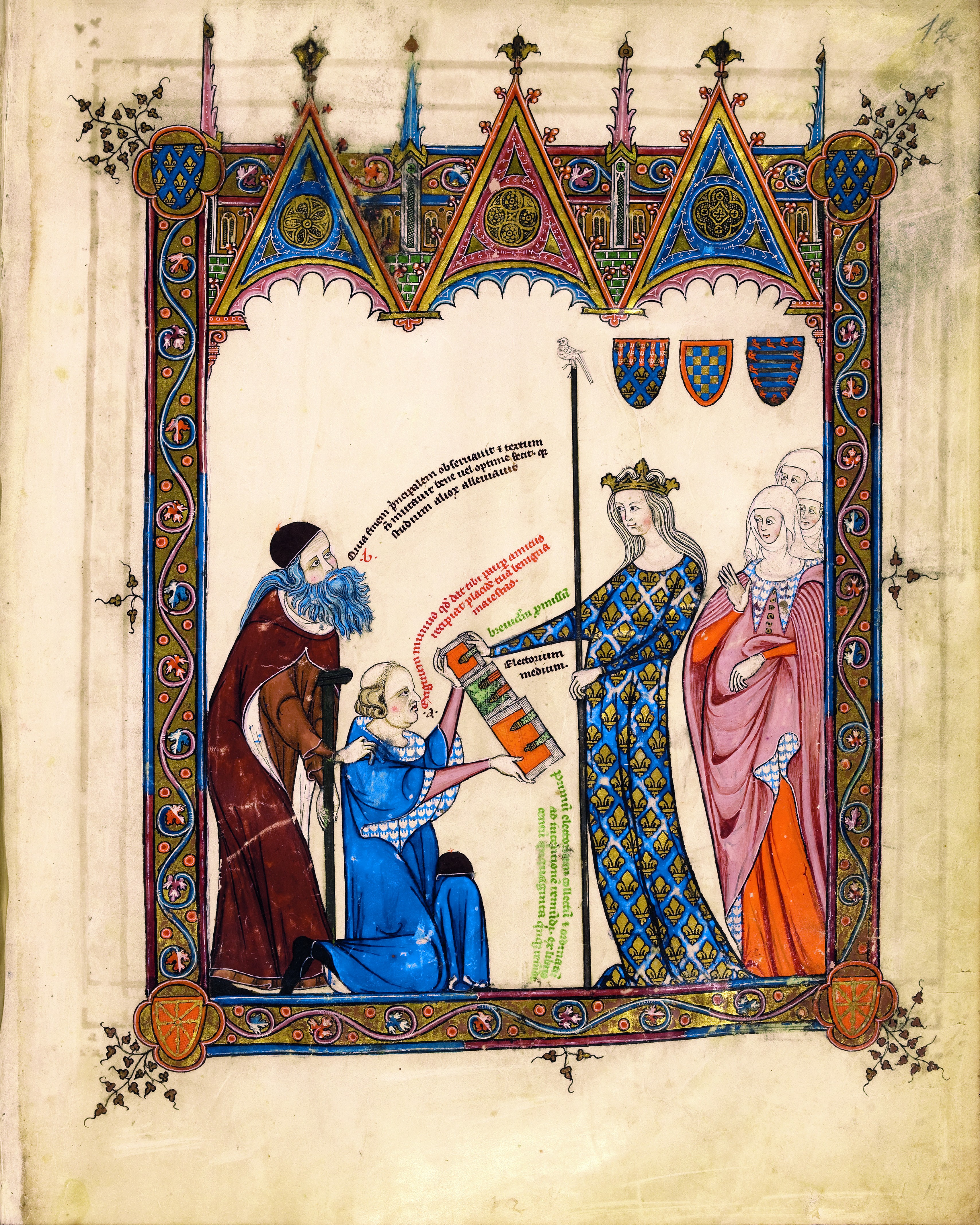 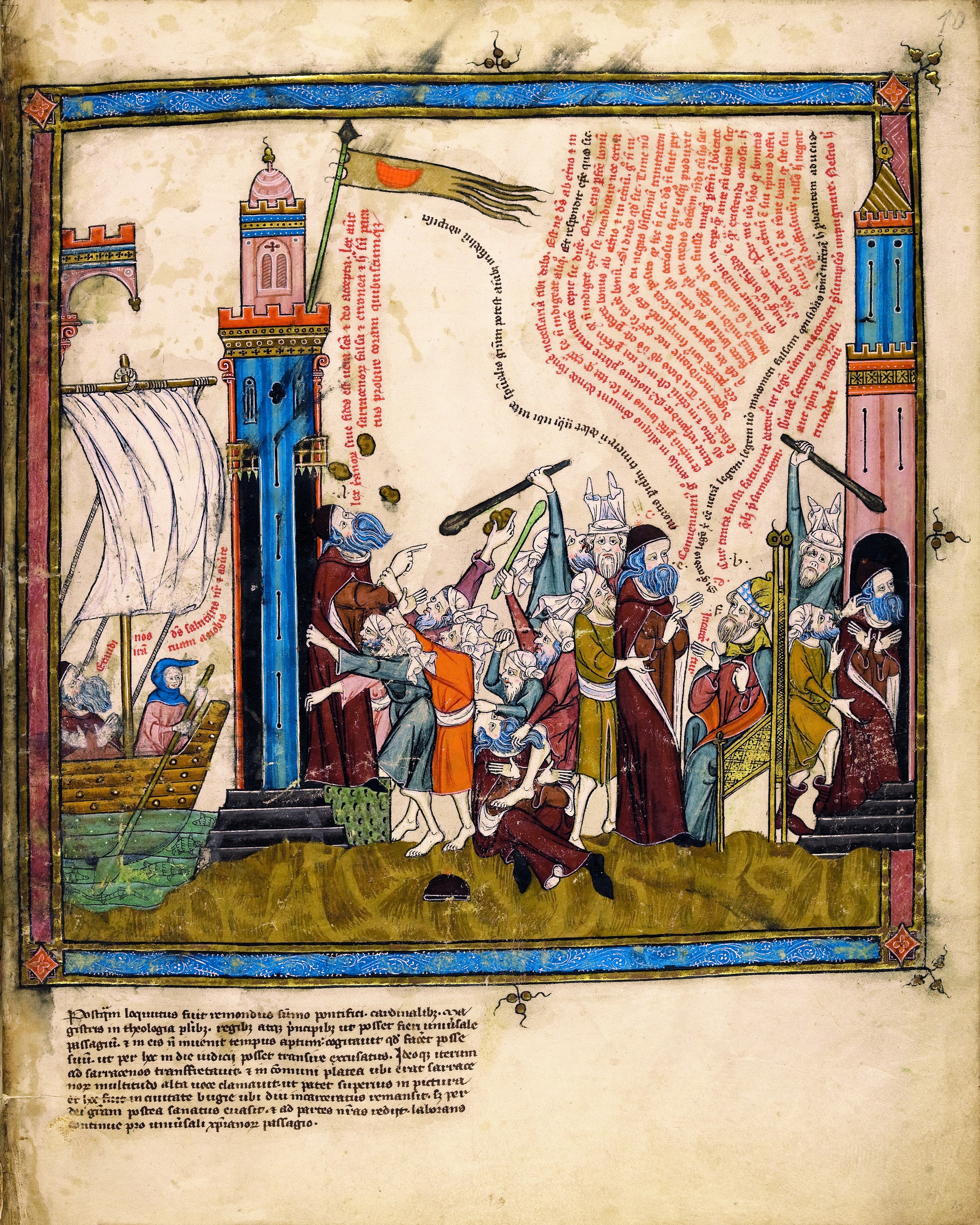