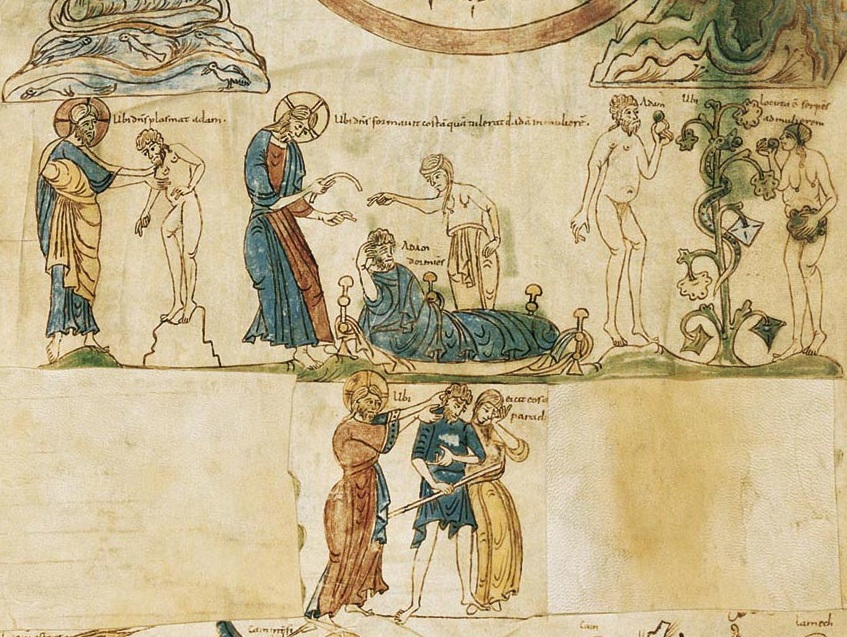 Abbot Oliva, third son of the Count of Cerdagne and Besalú and great-grandson of Wiffredo el Velloso, who renounced his inheritance rights and retired to the Benedictine monastery of Ripoll, becoming his abbot and

that of San Miguel de Cuxá, founder of many other monasteries, among which that of Monserrat stands out, and Bishop of Vic, is possibly the most important person in Catalonia around the year 1000, not only from the religious point of view, but also from the political and, fundamentally, from the cultural.

The Ripoll monastery, which has been reported since 880, had a library that according to an inventory from 979 had 65 books, suffered a great 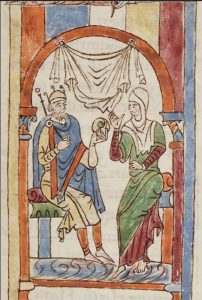 transformation under Abbot Oliva to the point that at his death, in 1047, he already had 246 volumes, among which were three large bibles, lavishly decorated, because although while in the previous period the desk manuscripts of Ripoll were very poorly lit, Oliva fostered relations with French and Italian monasteries from which manuscripts were received that served as inspiration for the new miniaturists of Ripoll, which became the largest cultural center in Catalonia, developing a type of inspired miniature in Carolingian iconography, very different from all l or earlier and that would serve as a model for Romanesque painting and sculpture in Catalonia.

The Bible of San Pedro de Roda written between 1010 and 1015 in the Ripoll monastery to be transferred, perhaps incomplete, to the Roda monastery, where possibly the miniatures of the New Testament were completed, of a very different invoice than the rest. The similarity of some wall paintings in the cloister with images of this bible seems to show that it was already in Rhodes around 1100, where it was preserved until the 17th century.

After Oliva’s death, the importance of Ripoll and the activity of the monastery gradually decreased until in 1835 exclaustration occurred, immediately followed by the pillage and the subsequent fire of the church and library, at which time all were lost. the codices that he still had.

Something similar happened with San Pedro de Roda, during the 18th century the bandits continually assaulted the monastery until in 1798 the last monks abandoned it and the monastery was looted and ruined, but this happened after the French general Noailles, who occupied the territories of Girona in 1693, he would have taken several codices from his library to Paris, which thanks to this spolion did not disappear, which allows us to know a small part of the work of miniaturists of that time, among them the Bible of Saint Pedro de Roda, which is currently kept in the National Library of Paris.

The Roda Bible is a large manuscript with 566 480 X 324 mm vellum folios, which was rebound in France, divided into four volumes. Along with the Ripoll Bible, it is the best exponent that has come down to us of the quality that the desk of Saint Mary of Ripoll reached in the time of Abbot Oliva. Its 63 illustrated pages, together with the images from Ripoll’s Bible, show the great change that occurred not only in the Catalan miniature but also in its painting and sculpture. 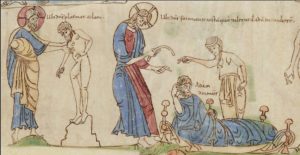 We know of Oliva’s contacts with French monasteries and of his trips to Rome, where he had magnificent relations with the papacy and with Italian religious communities, which allowed him to get to know the miniature of Fleury, Limoges and other French monasteries as well as the latest Italian productions, with their influences of Byzantine art, and to acquire for the renovation of their desk objects and books of the latest Carolingian production and Italian codices to expand their library, thus also providing models for the training of their scribes and miniaturists. It seems that until then the Catalan manuscripts had few images, but after this miniature revival, the images became very important in that the two Bibles signified a significant break with all of the above.

The two bibles – and possibly the third missing one – are the work of Ripoll’s desk and, analyzing the similarities and differences of the first two, it can be thought that their development corresponds to a single project, not just the renewal of the Catalan miniature in the beginning of the Romanesque, but we can also recognize the influence of its images on the sculpture and painting of the Catalan Romanesque.

While the texts of both bibles have only one author, the copyist Guifré, different illuminators have been recognized in the two manuscripts. A first 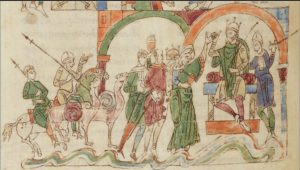 illuminator, author of most of the miniatures in both, deals only with the drawings, leaving the color for two others miniaturists one of quality that was being replaced by another less skilled, to reach the third volume in which the drawings are very little colored. However, the Roda Bible was not completed in Ripoll, it is assumed that all the images of the New Testament, very different from the previous ones, would be made in the Roda monastery itself since this bible must have been there before the construction of the cloister, since images of these Bibles are copied in his paintings and in some of the few capitals preserved.

In fact, the creation of the Roda and Ripoll Bibles generated a fantastic collection of images for Romanesque miniature, painting and sculpture in Catalonia. It is considered that part of the main cover of the church of San Pedro de Ruda is copied the model of the frontispiece of its bible, in the same way that part of the cover of the church of Ripoll was copied from the cover of the Bible of Ripoll, which served to demonstrate to Pijuan that what was known as Farfa’s Italian Bible was a creation of the Ripoll monastery. We can also find images of both bibles used as a model in other manuscripts on Ripoll’s desk, in works from the Cuxá monastery or from the Girona cathedral, such as the Beatus of Turin, and also in the cloisters of the Girona and Saint cathedral Cugat del Vallés among others. 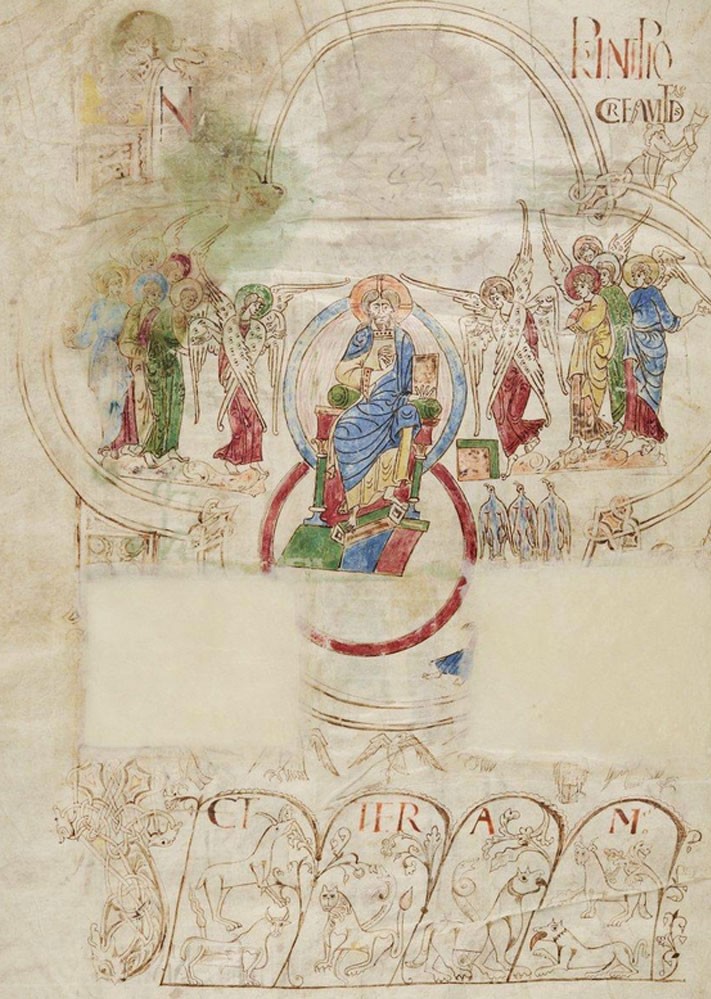 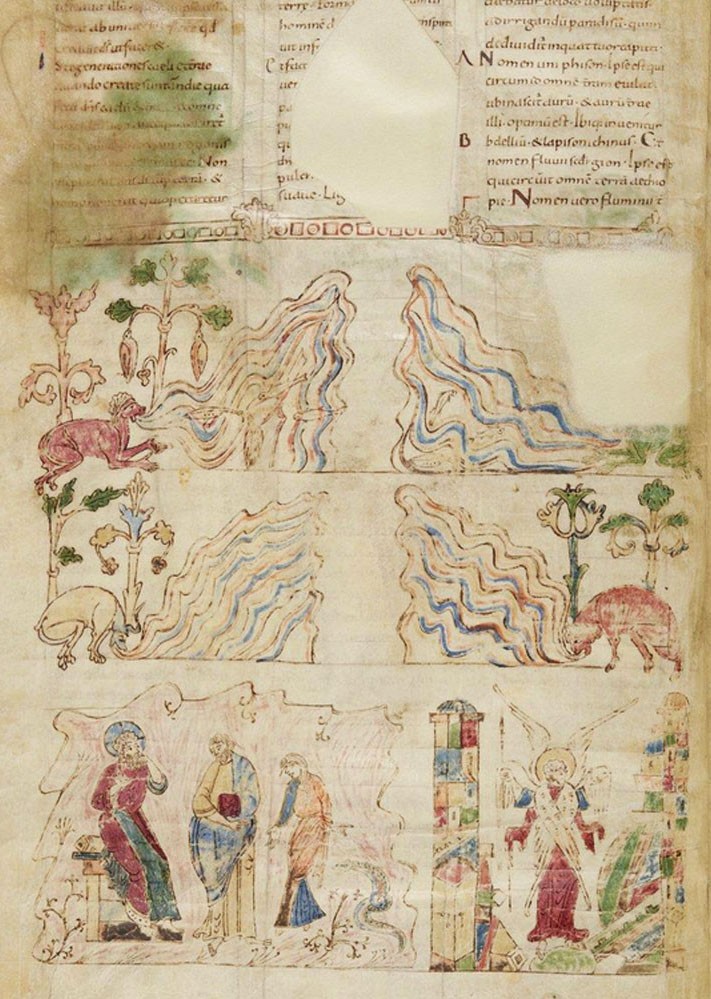 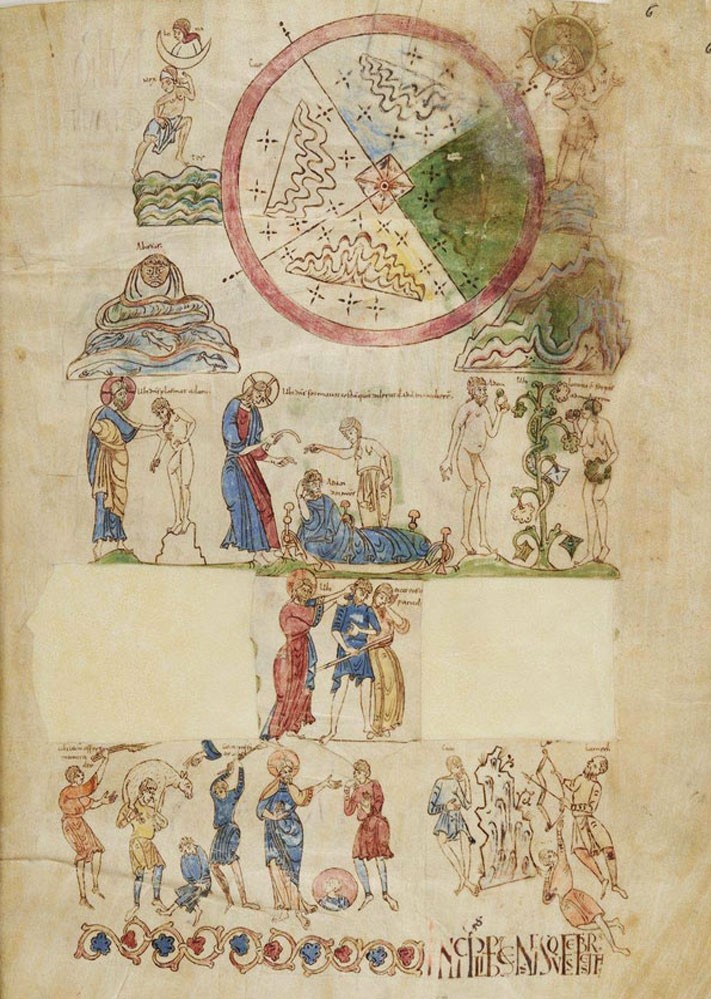 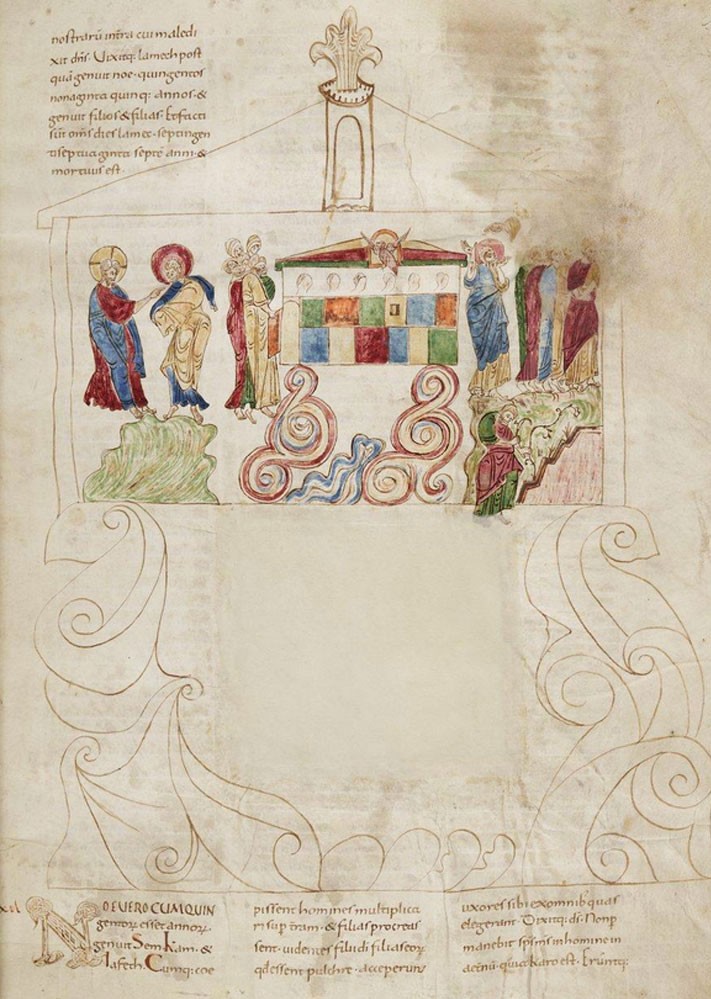 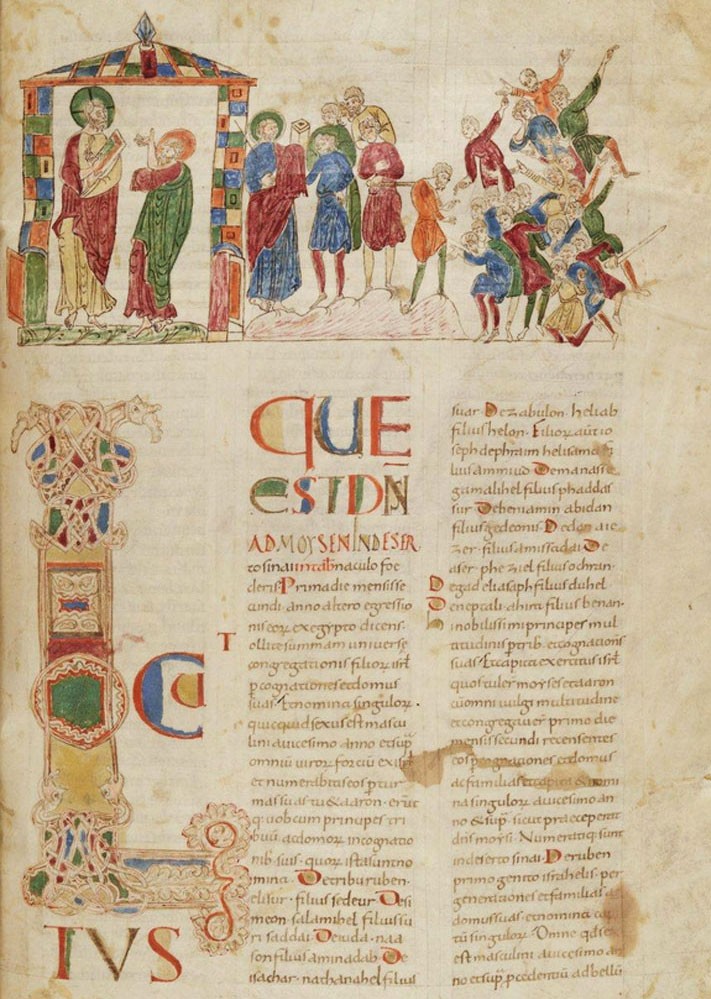 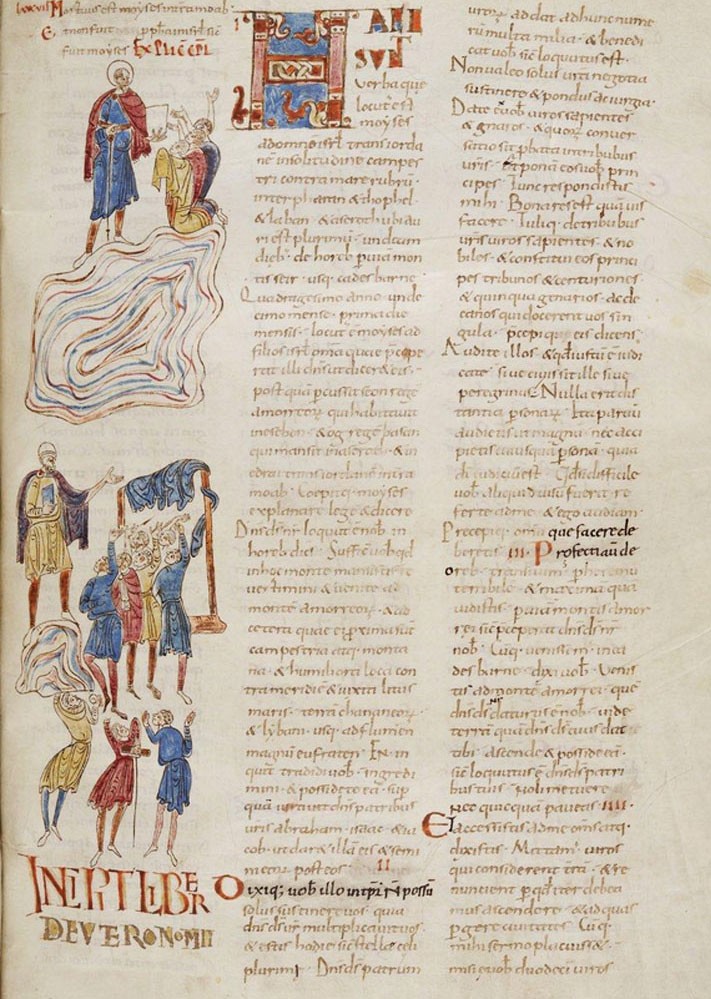 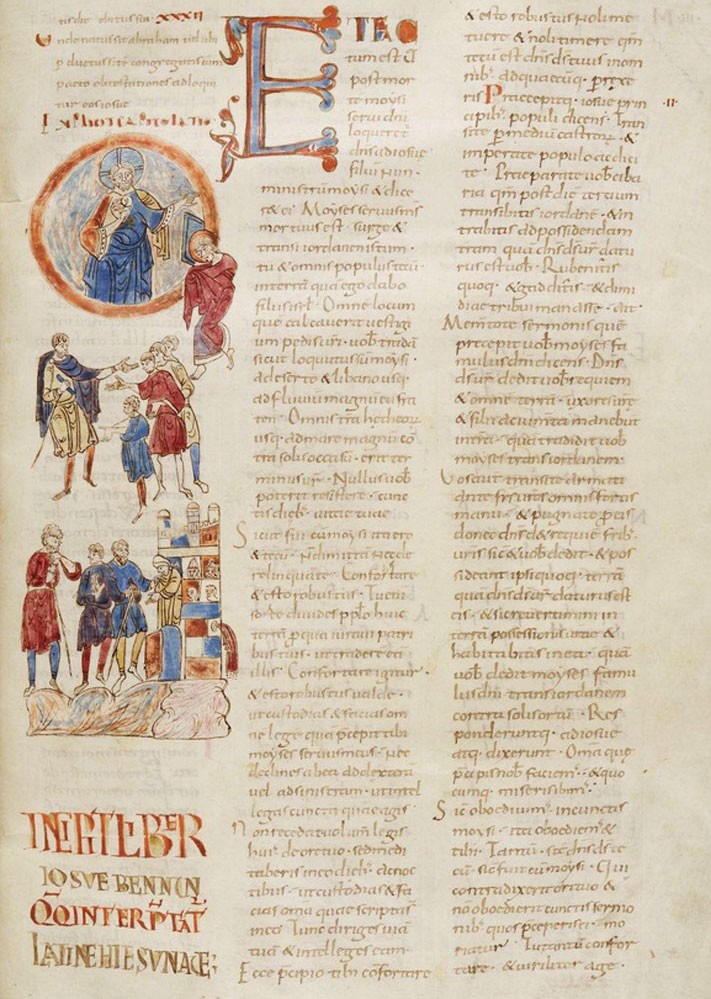 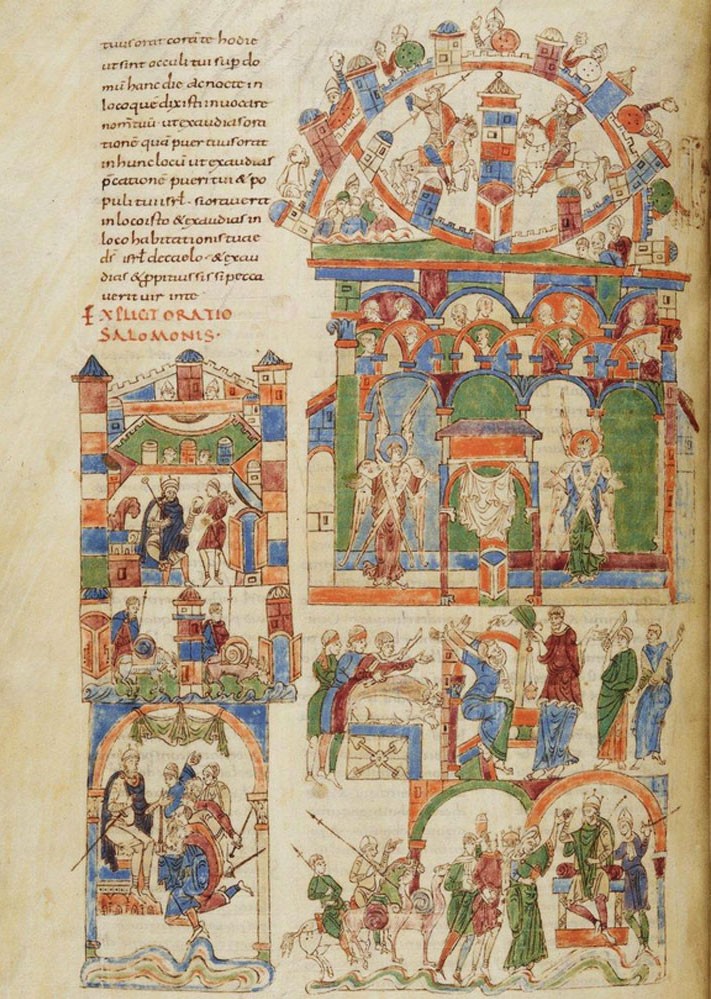