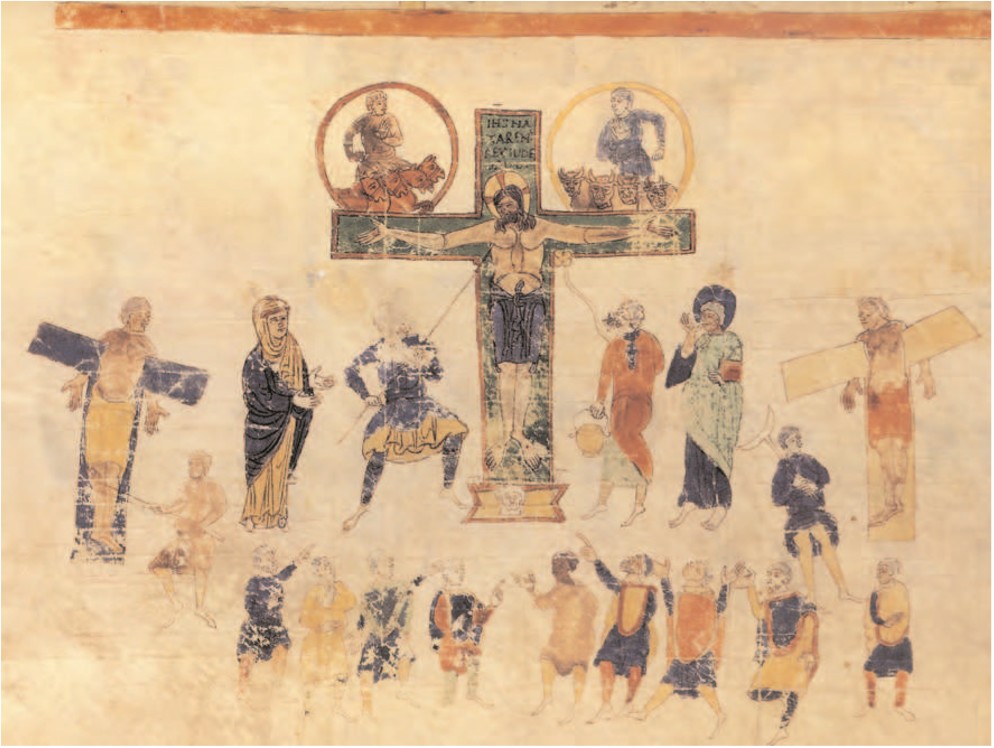 The Olive Abbot, third son of the Count of Cerdanya and Besalú and great-grandson of Wiffredo el Velloso, who renounced his inheritance rights and retired to the Benedictine monastery 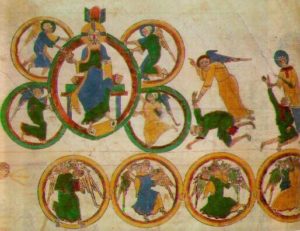 de Ripoll, becoming its abbot and that of San Miguel de Cuxá, founder of many other monasteries among which stands out that of Monserrat and bishop of Vic, is possibly the most important character of Catalonia around the year 1000, not only from a religious point of view, but also from the political and, fundamentally, from the cultural.

The monastery of Ripoll, of which we have heard since 880, in which there was a library that according to an inventory of the year 979 had 65 books, underwent a great transformation under the Abbot Oliva to the point that on his death, in 1047, already had 246 volumes, among which were three large, profusely decorated Bibles, for while in the previous period Ripoll’s desk manuscripts were very dimly illuminated, Oliva fostered relations with French and Italian monasteries from which manuscripts were received that served as inspiration for the new miniaturists of Ripoll, which became the largest cultural center of Catalonia, developing a miniature type inspired by Carolingian iconography, very different to all the above, since until then the Catalan manuscripts had few images, which would serve as a model for Romanesque painting and sculpture in Cataluña.

From Ripoll’s scriptorium came these three copies of the Bible, perhaps developed within a single project. One of them disappeared in the fire of 1835, another is the Bible of Rhode. The third is the Ripoll Bible, copied in the monastery of Santa Maria di Ripoll between 1015 and 1020, which had to be moved to Saint Victor in Marseille in 1172, when 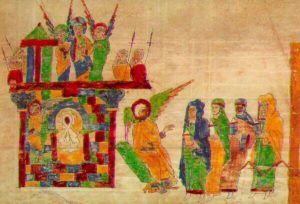 Ripoll became dependent on the monastery, and from there was transferred to the Vatican in the 17th century. It is currently preserved in the Vatican Library where, by mistake, due to its large size, it had been considered as an “Atlantic Bible” Italian attributed to the Monastery of Farfa (Farfa Bible), until Pijoán proved in 1911 that it was a Catalan manuscript by the similarity between the cycles of the Old Testament of this Bible and those of the front of the Monastery of Ripoll.

After the death of Oliva the importance of Ripoll and the activity of the monastery gradually decreased until in 1835 the exclaustration occurred, followed immediately by the looting and the subsequent burning of the church and the library, At that time, all the codices that were still preserved were lost, although some works were saved because they were looted before that date, so it has been possible to study the development of the style and the main characteristics of the works of his scriptorium. and check without any doubt that the Bibles of Roda and Ripoll are the work of this monastery.

The Ripoll Bible, like that of Roda, is a large manuscript consisting of 465 folios of 550 X 370 mm vellum written in Carolingian script, made in Ripoll between 1015 and 1020. It contains, in addition to the biblical books, more than 200 texts that make it a great encyclopedia about the sacred scriptures, with magnificent images about the Old and New Testaments.

The fact that these two Bibles and the third one disappeared all of such a large size, written on vellum and with a multitude of images, were created in such a small time environment gives an idea of the importance of Santa María de Ripoll in the time of Abbot Oliva, not only for the quality and 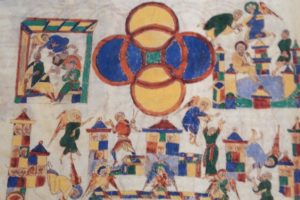 production capacity reached by his desk, but also from the point of view of its economic power, since it has been calculated that for this Bible a sheepskin would have been used for each of its double folios so that its preparation meant the sacrifice of about 233 sheep, a very significant expense for a monastery at that time and three were made.

The creation of the three Bibles seems to correspond to a single project of Abbot Oliva. In fact they constituted a fantastic collection of images for Romanesque miniature, painting and sculpture in Catalonia. It is considered that in part the main doorway of the church of St.Peter of Rhodes is copied the frontispiece model of his bible, in the same way that part of the doorway of the church of Ripoll was copied from the doorway of the Bible of Ripoll, which served to demonstrate to Pijuan that what was known as the Italian Bible of Farfa was a creation of the monastery of Ripoll prior to the construction of the Romanesque monastery. We can also find images of both bibles used as a model in other manuscripts of Ripoll’s desk, in works of the monastery of Cuxá or of the Cathedral of Girona, as the Blessed of Turin, and also in the cloisters of the Cathedral of Girona and San Cugat del Vallés among others.

As for its authors, all the texts were copied by the monk Guifré, who included decorated capitals and ornaments in the text such as leaves, flowers or trees. In the images, in which it is interesting to note that in the illuminated pages the cycles appear in horizontal bands 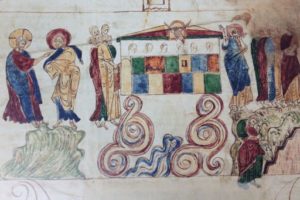 framed by lines, two perfectly differentiated cartoonists are distinguished: one, of Impressionist style, was the author of most of the images, is an energetic, firm and schematic cartoonist. The second, of less quality, is recognized by the round cheeks of his characters and because he used the ruler and compass in the geometric drawings. But in all cases the images are subsequently colored by someone different from the creator of the drawings, a task in which at least two painters of very different quality are also recognized. These same artists will take charge after the preparation of the Bible of Rhodes and we find them again in other codices of Ripoll.

His style, while retaining features of Ripoll’s desk tradition, is clearly dominated by the influence of the French Romanesque miniature of monasteries such as Fleury and Limoges among others, as well as by the latest Italian productions, with its reference to Byzantine art and would strongly influence the whole iconography of Catalan Romanesque art. 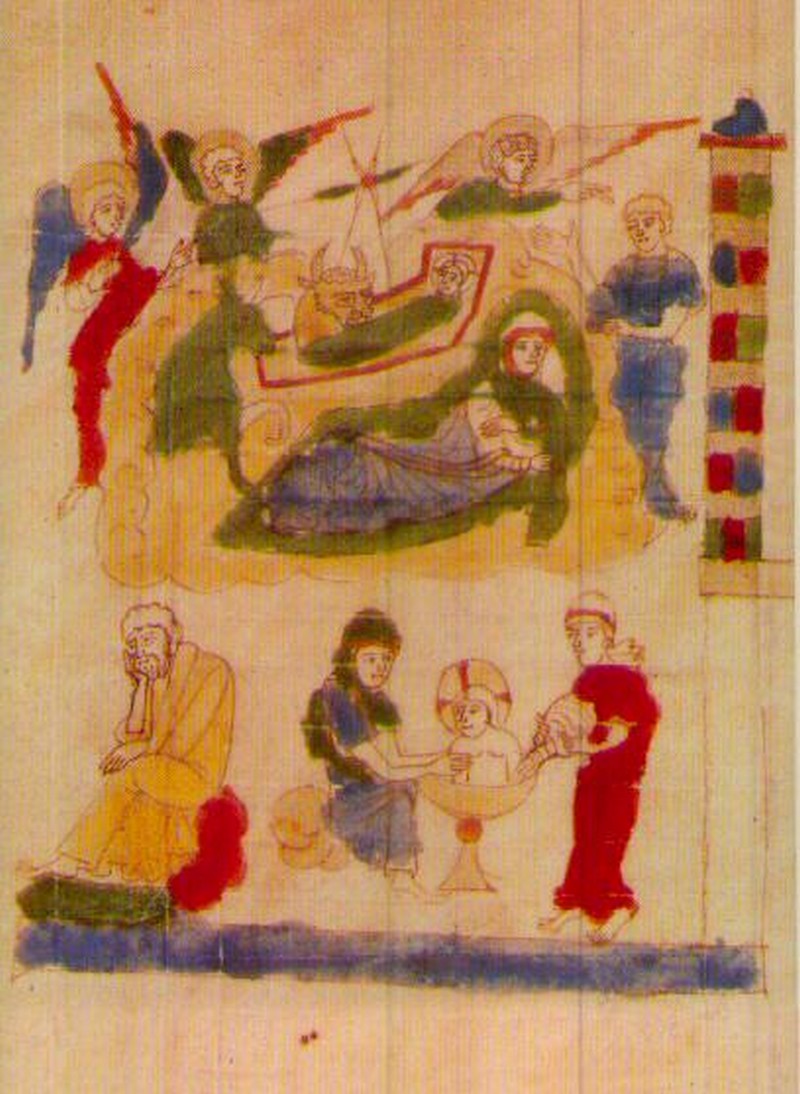 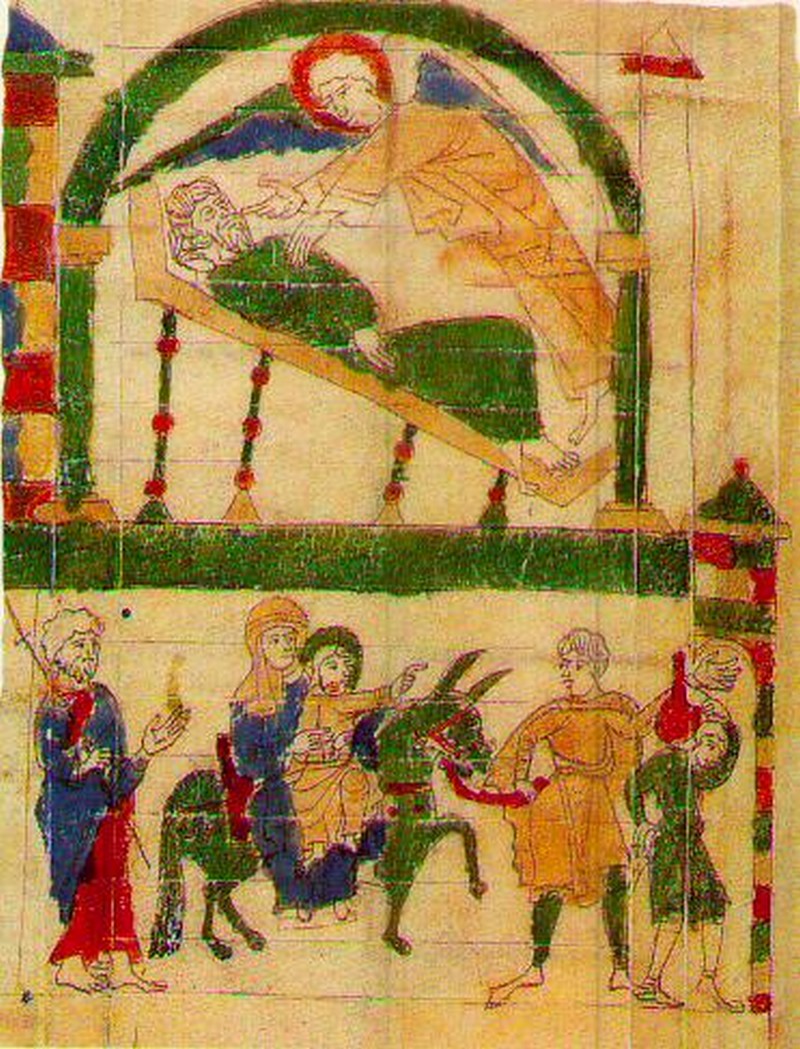 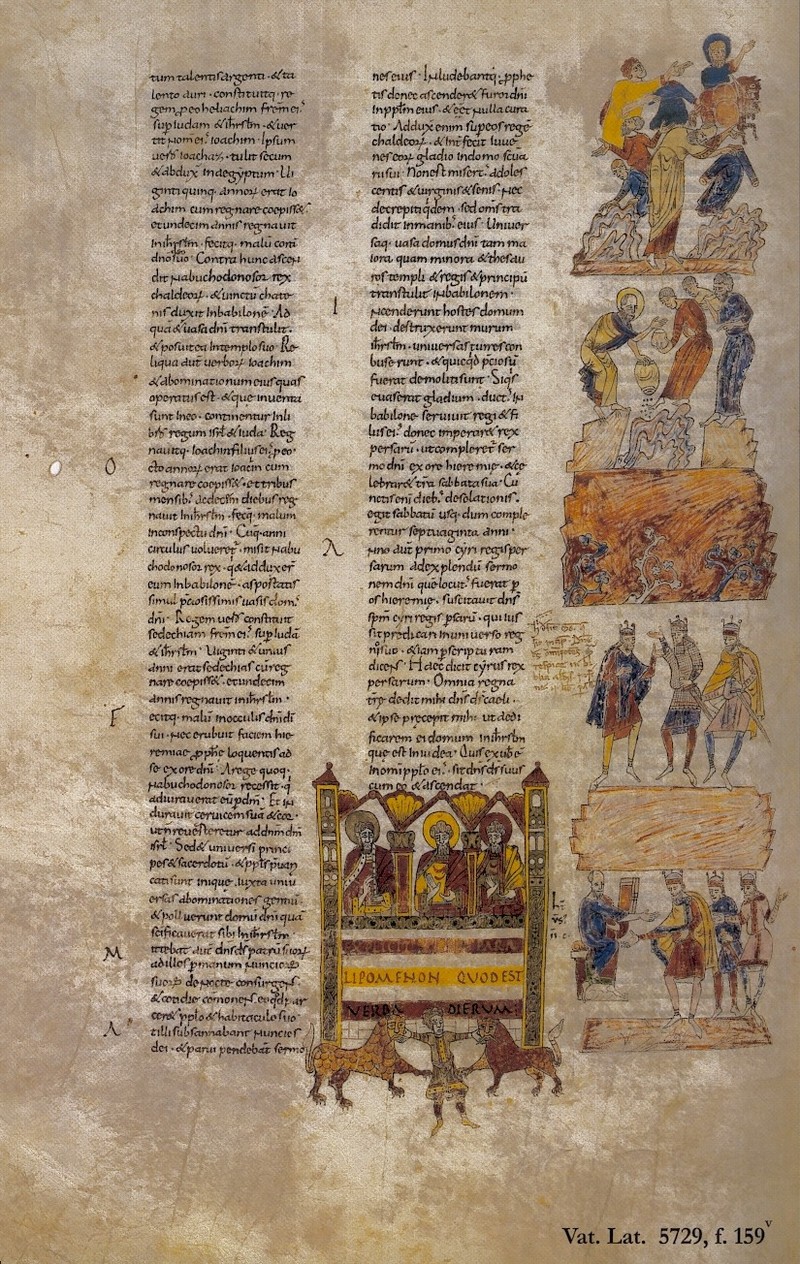 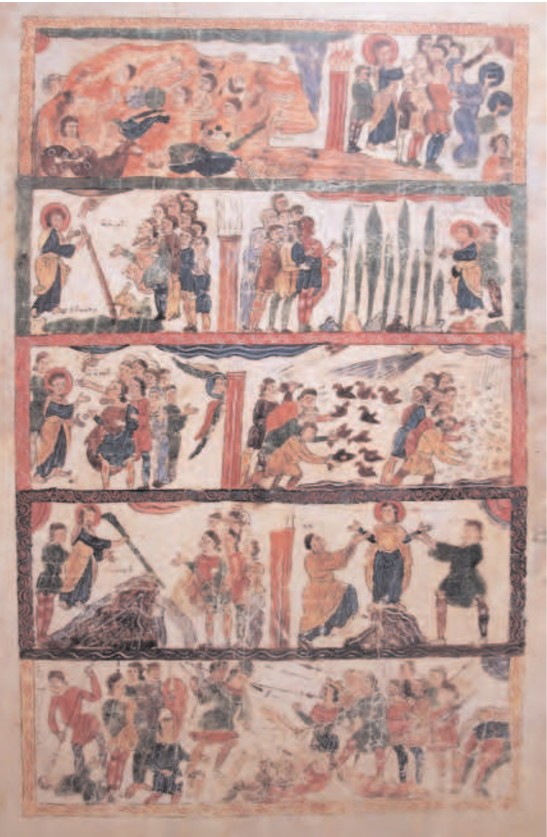 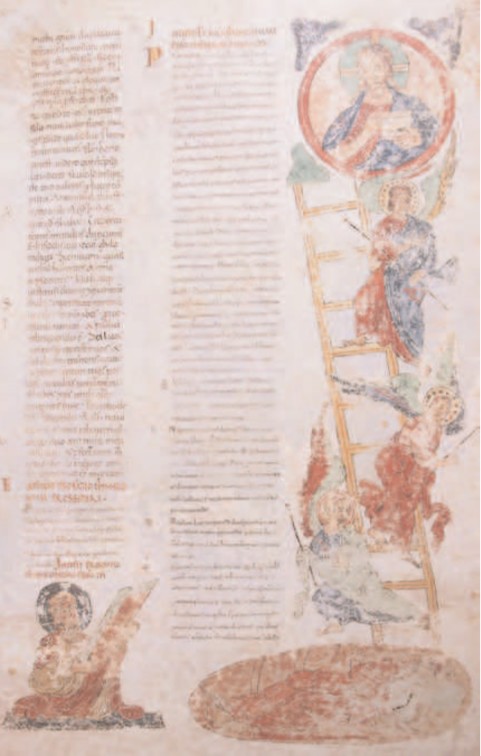 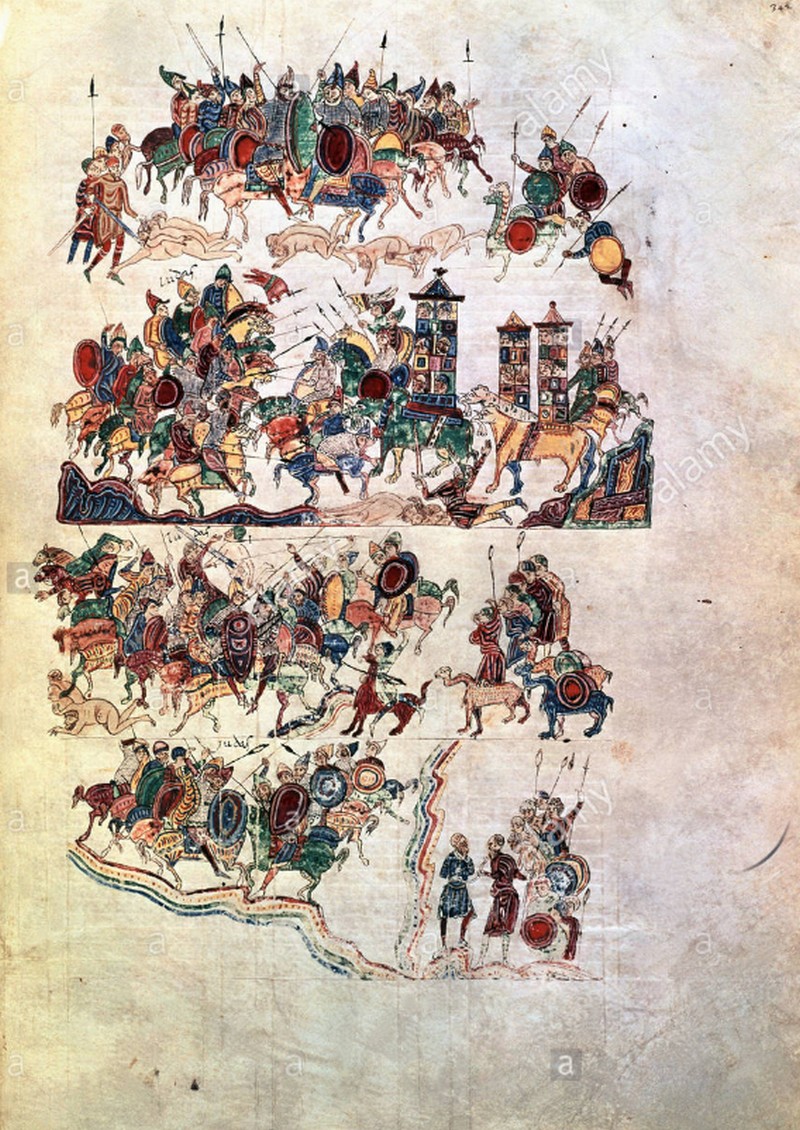 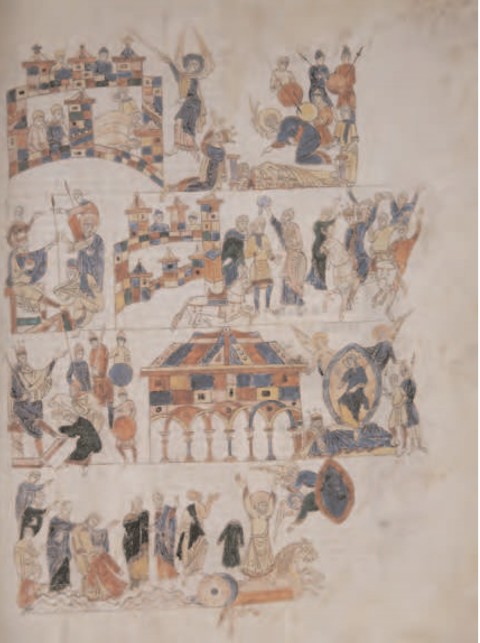 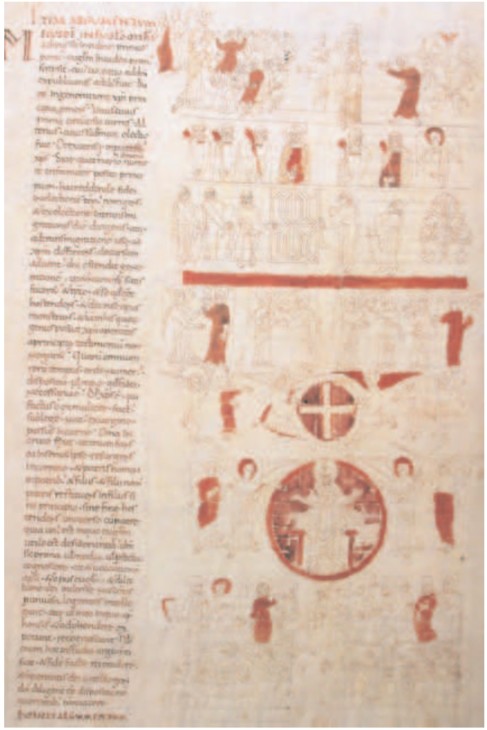