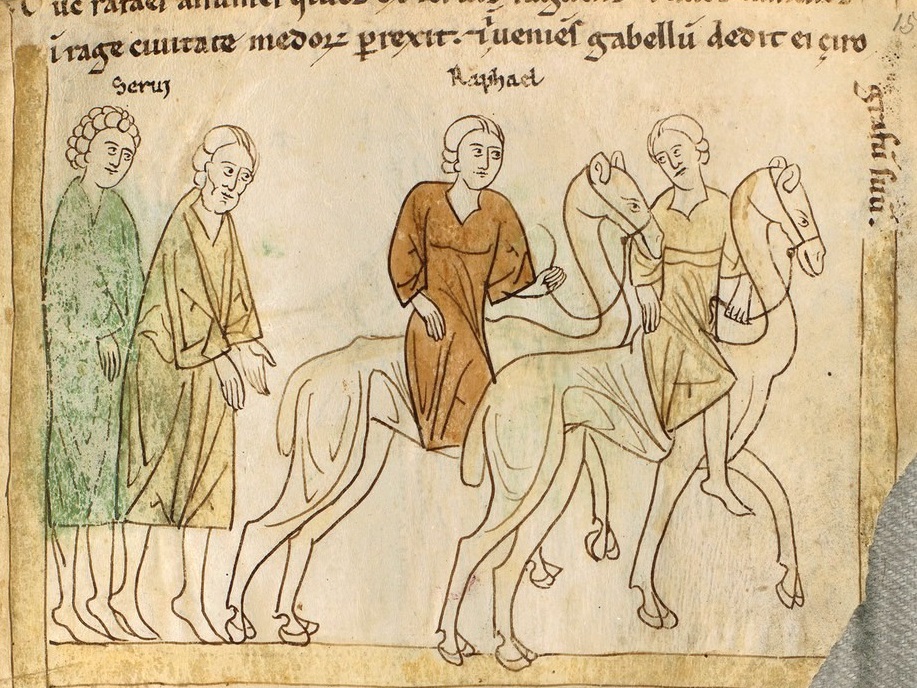 Fernando Perez (or Ferrando Petri) of Funes was a canon of the Cathedral of Calahorra who became between 1192 and 1194 chancellor of the Navarrese king Sancho VI El Sabio. On the death of the monarch in 1194, his successor, Sancho VII The Strong, commissioned him to make a Bible that ended in 1197. This Bible, usually called King Sancho’s Bible or Pamplona’s first Bible, is currently in the Amiens Municipal Library.

At the end, the monarch commissioned a new copy of the Bible, as a gift for a woman of high social rank, who could be his sister Doña Berenguela in her wedding with Ricardo Corazón de León, or for her mother, Doña Sancha de Castilla. 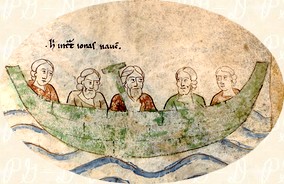 This second Pamplona Bible, which we analyze here, was not a simple copy of the previous one, since Ferando Pérez modified more than 40% of the scenes, adding other 91 that did not exist in the first. In addition, a finer parchment, more gold and more expensive pigments were used, demonstrating the importance of the commission.

The manuscript, which was made in a scriptorium monacal of Pamplona remained in Spain until the early nineteenth century and was a highly valued manuscript, to the point that it was made a copy in France at the beginning of the fourteenth century, in the style of this time, which is currently preserved in New York. Purchased in Paris in 1814 for the collection of the Duke of Oettinger-Wallerstein, which in turn was acquired by the State of Bavaria in 1980, passing to the University Library of Augsburg, where it is now preserved under special protection measures because, due to the use it has endured for eight centuries, its scroll is in poor condition.

The manuscripts of Ferrando Petri can be considered as exceptional works in the entire European early medieval miniature. Unlike the rest of the authors, who give more importance to the text 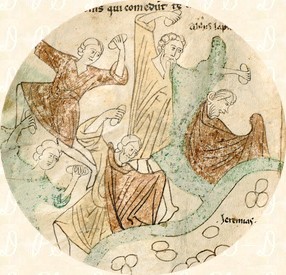 that to the images and that they insert most of these inside the text, the Bibles of Pamplona base all the content in the miniatures, that form scenes of half page or full page, with the name of the characters that appear in the image, to which only short explanatory texts, originating in a version of the original Vulgate, written in lower-case Gothic script, are subsequently added below the vignette.

In his 271 folios of parchment, which include 33 of the 46 books of the Bible, we find up to 976 scenes presented in the form of vignettes emarcadas a mano alzada once the images and the text are completed. They are drawn in fine feathers and coloured in watercolour in soft tones, basically greenish, yellow and ochre, also using gold leaf in 61 of them. The experts consider that three scribes and at least four painters have participated in its preparation, one of which should have been Ferrando de Petri himself, who also 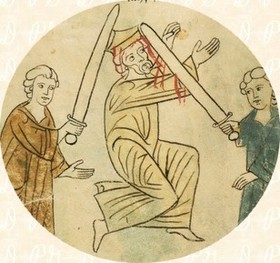 was responsible for selecting and adapting the texts, and ordering the illustrations.

With a harmonic and expressive overall composition and an energetic drawing, the miniatures, in which according to tradition the artist has used people from his usual environment as models, offer scenes that are sometimes very complex and of great realism and originality. All this within a style that although presents, like most of the Spanish altomedieval miniature, multiple influences from various eras and origins, in addition to a form of presentation and forms of use of drawing and coloring very unusual in his time, defines it as a fully Romanesque work.

The codex contains the Old and New Testaments, with extensive decryption of the genealogies of Christ, and the representation of 203 saints and saints ordered chronologically, some closely linked to the Kingdom of Navarre, such as those of San Miguel de Aralar, Saint Saturninus, Saint Nicholas, Saint Martin, Saint Zoillus and Saints Nunilona and Alodia, as well as an appendix with texts of the apocryphal gospels concerning the second coming of Christ. However it does not include the Apocalypse of Saint John, something surprising in a Spanish manuscript.

The Second Bible of Pamplona, both for its extensive content -it is the manuscript of its time with the greatest number of miniatures that has been preserved- as for its special structure in large vignettes with very little text and for the originality and vitality of its miniatures drawn fine feather and colored with watercolors of soft tones, set of features that we only find in other works of Ferrando Petri, is one of the most complete and interesting biblical manuscripts of the Spanish Middle Ages. 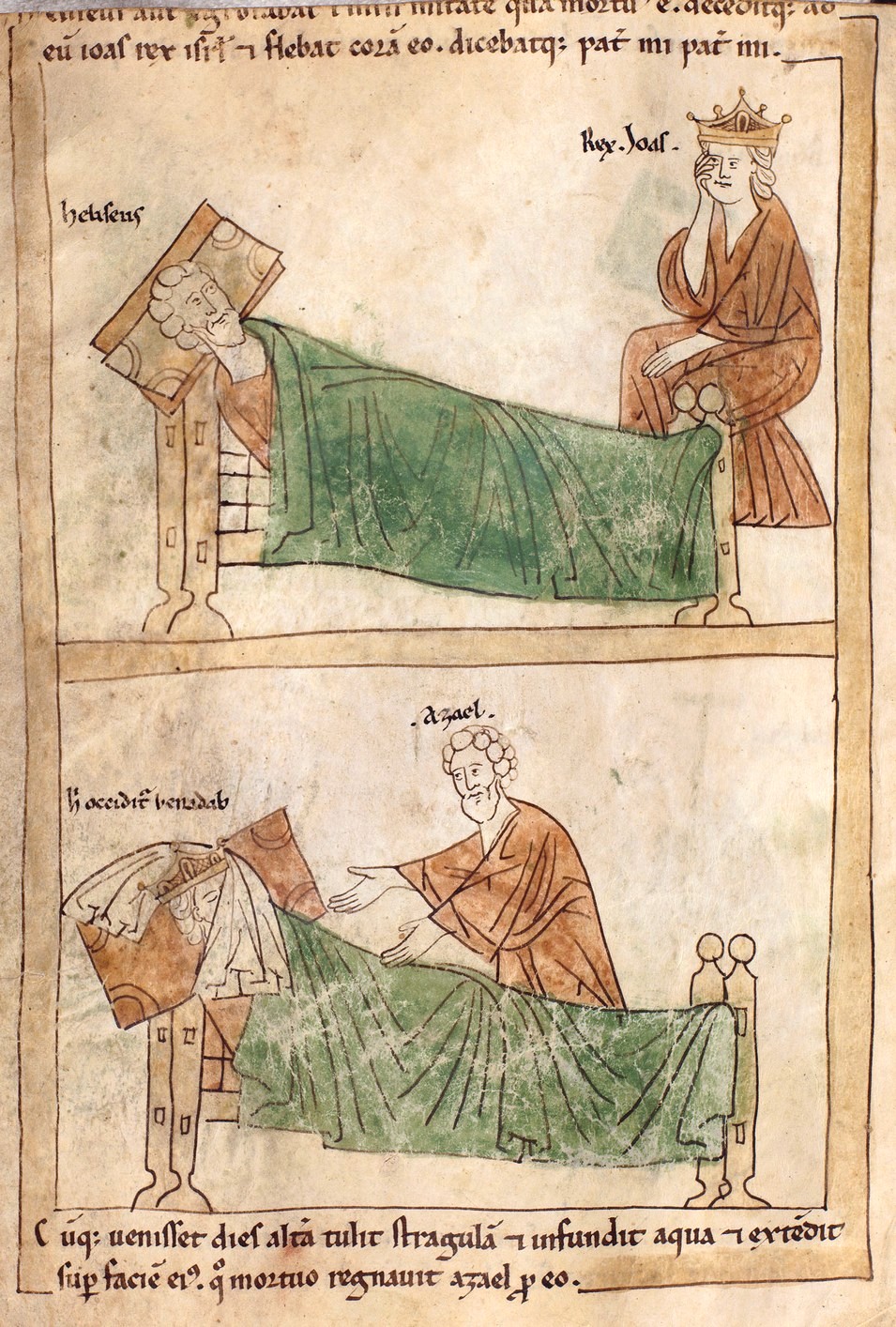 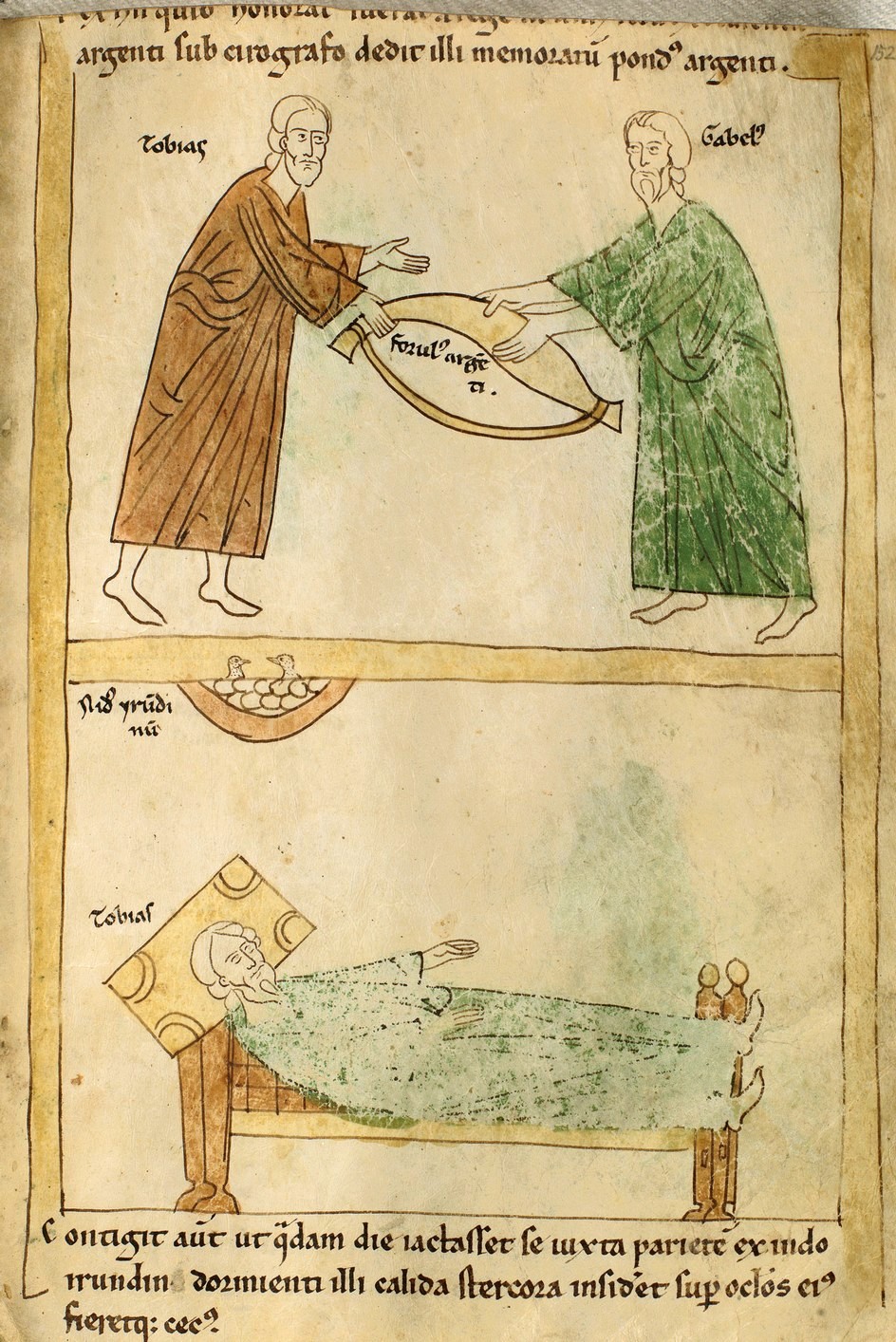 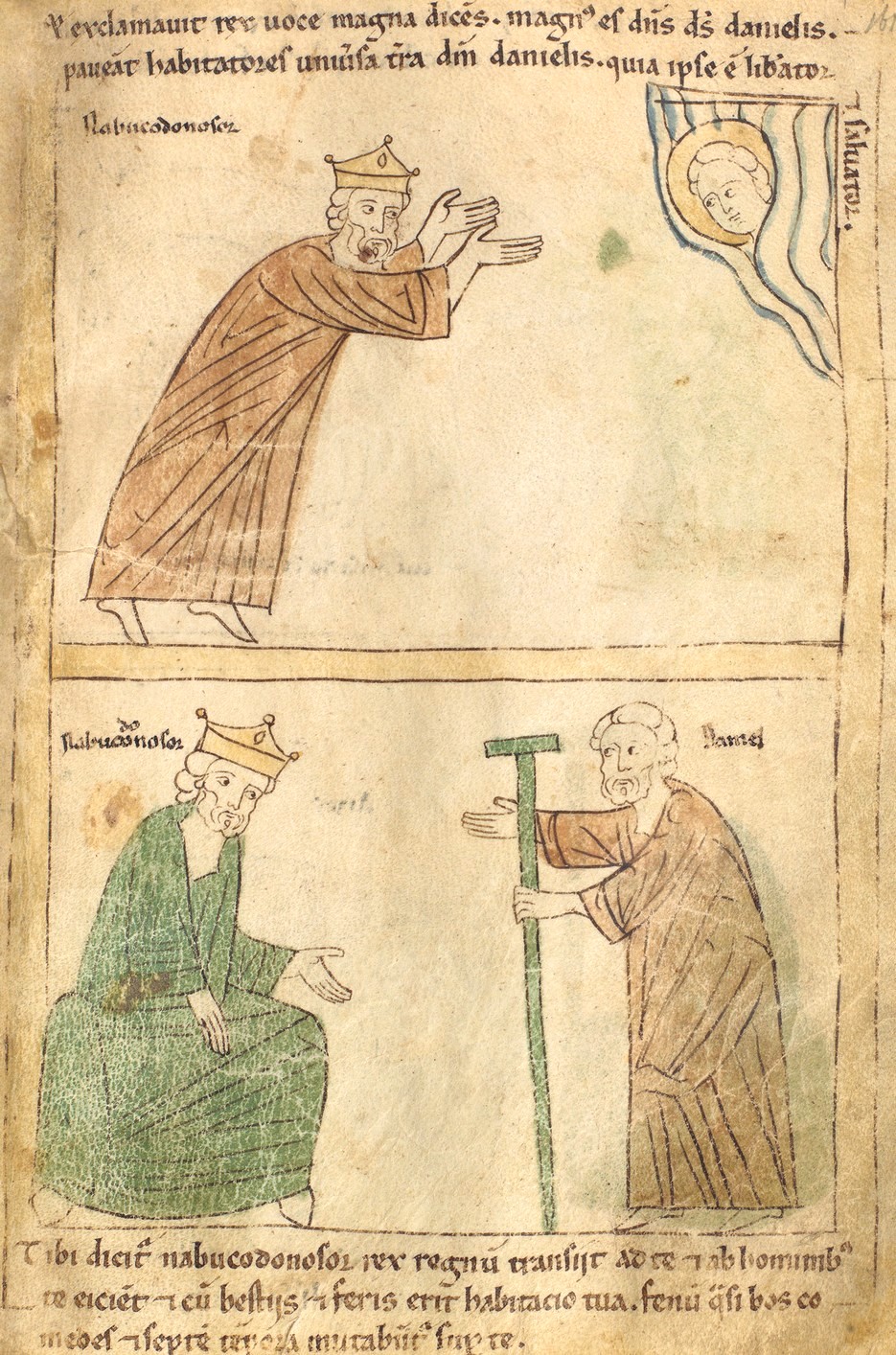 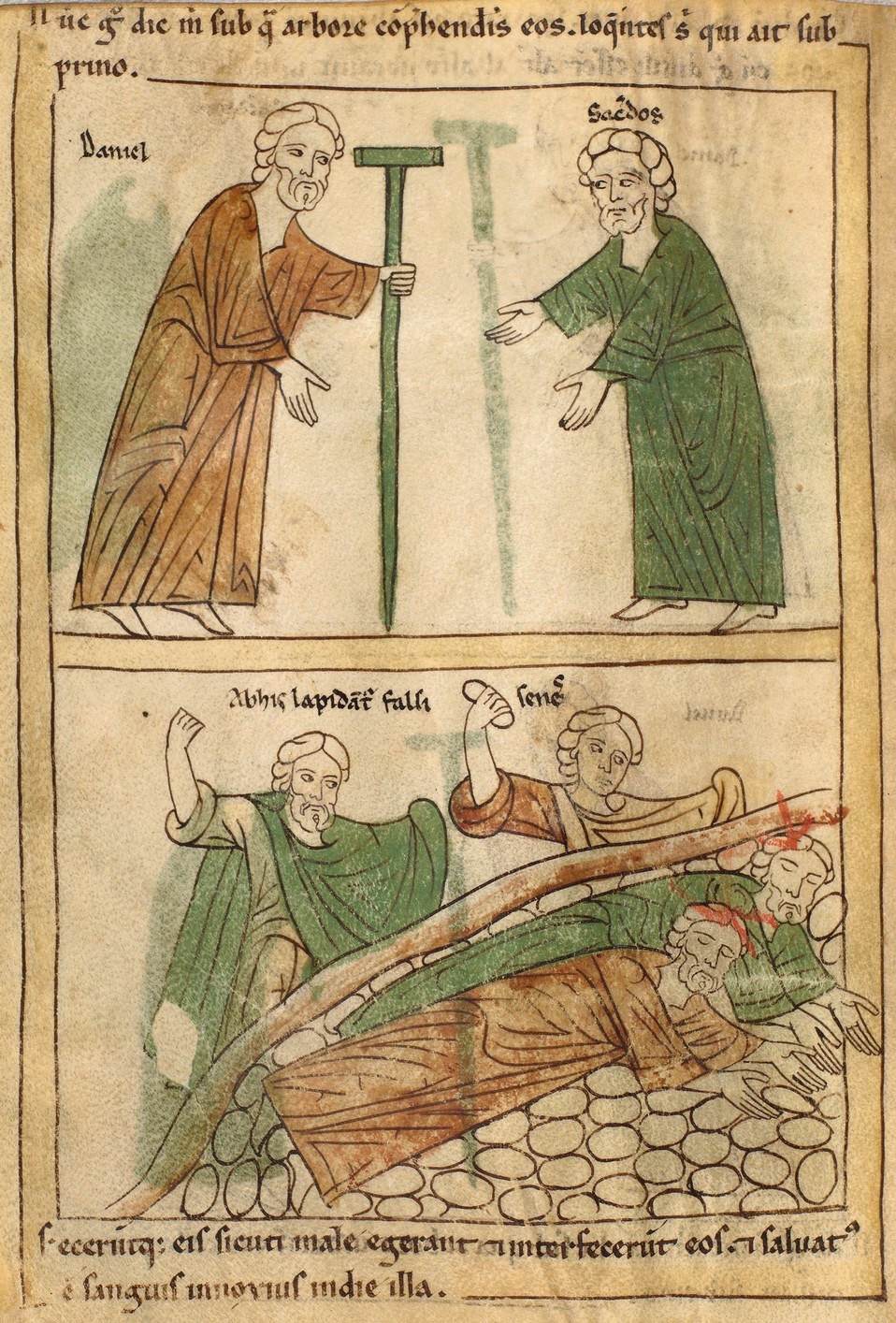 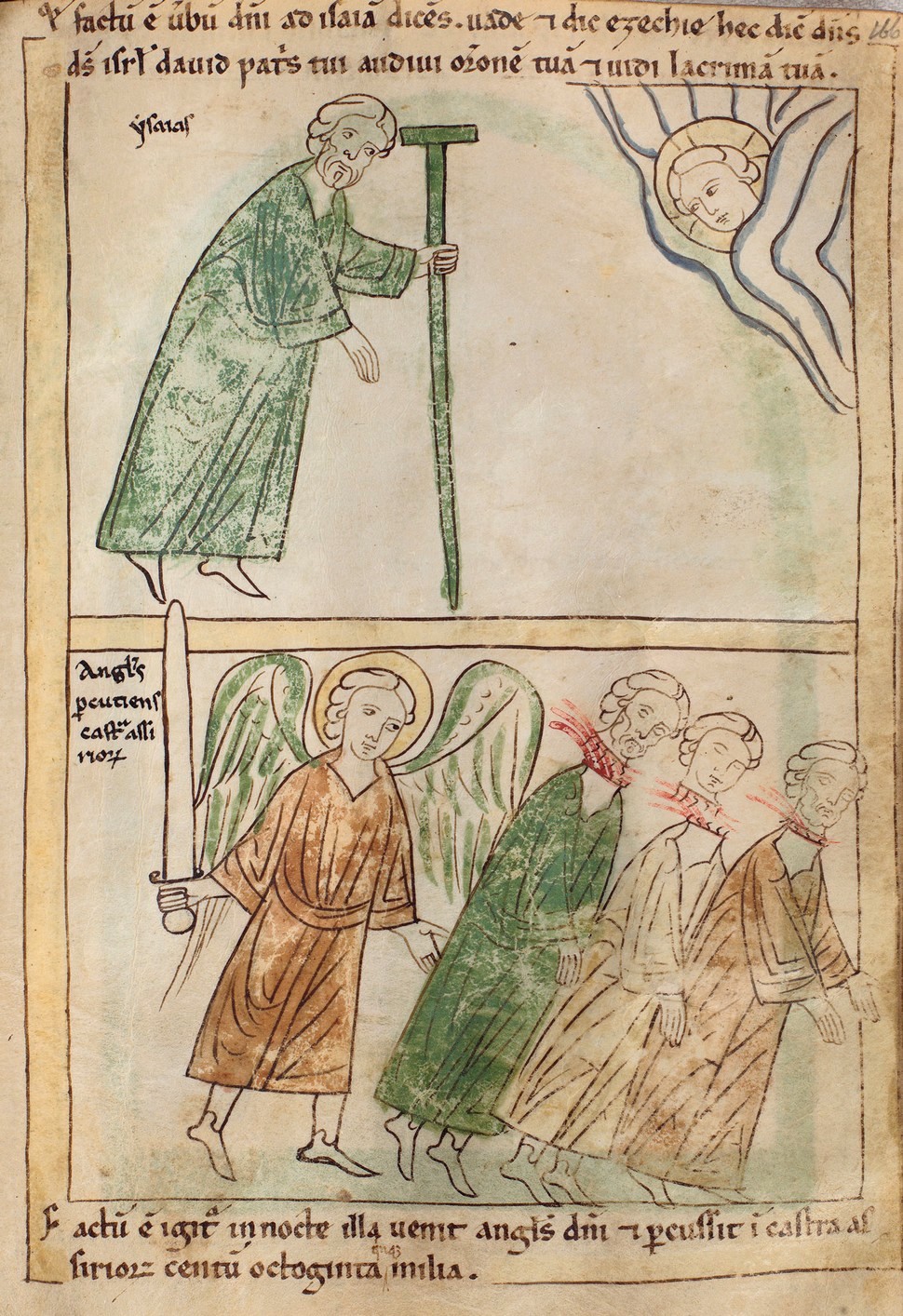 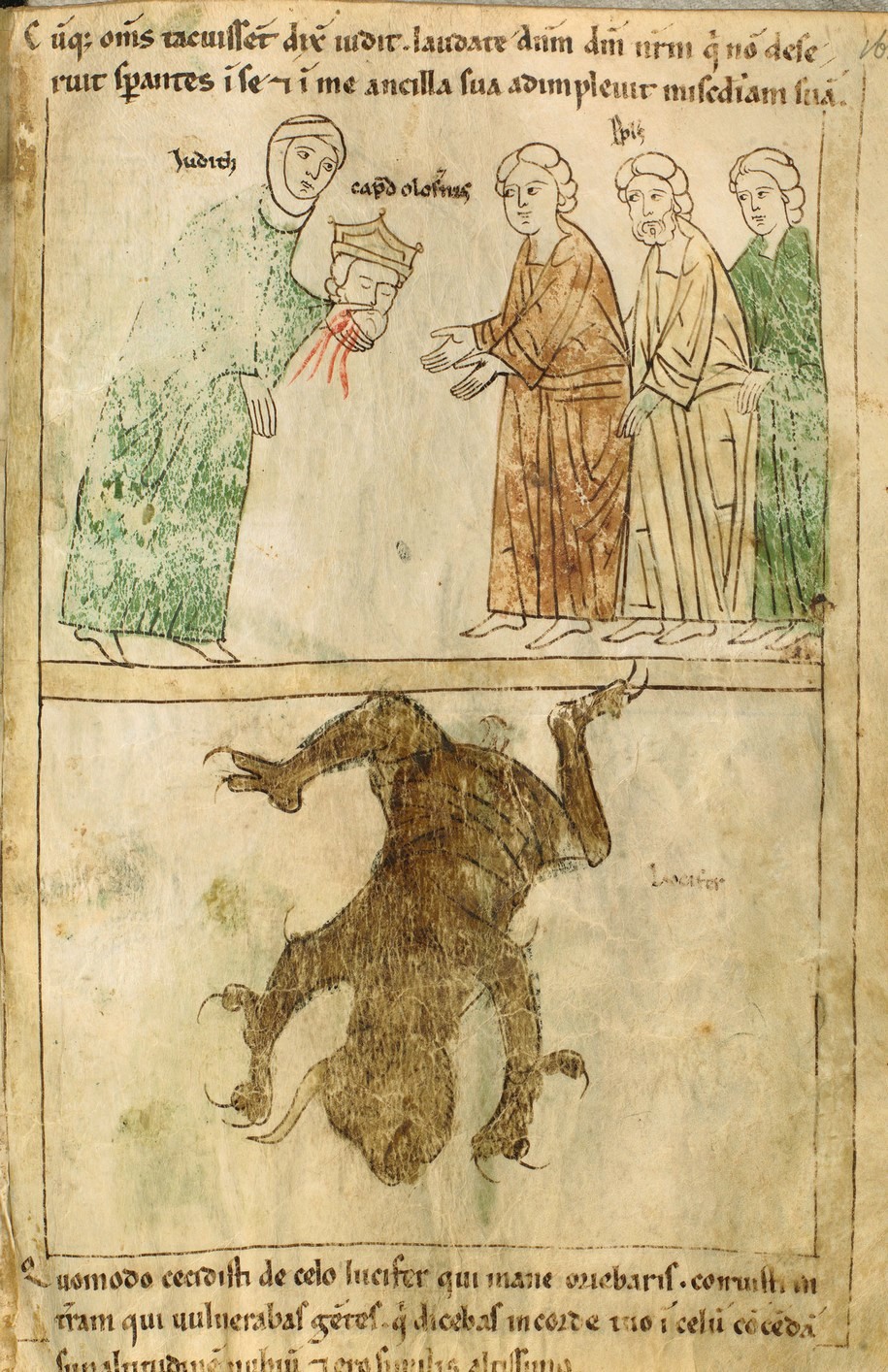 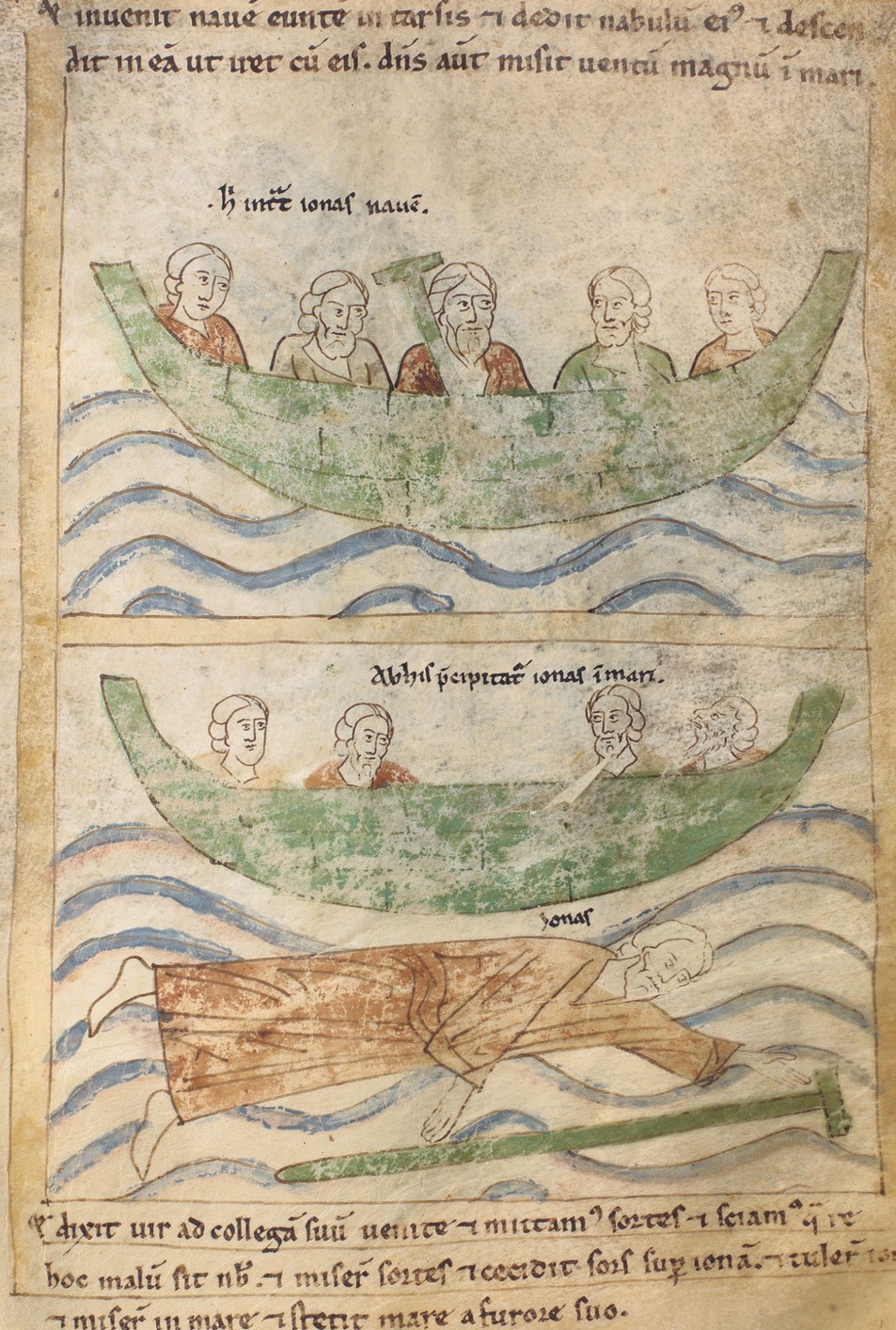 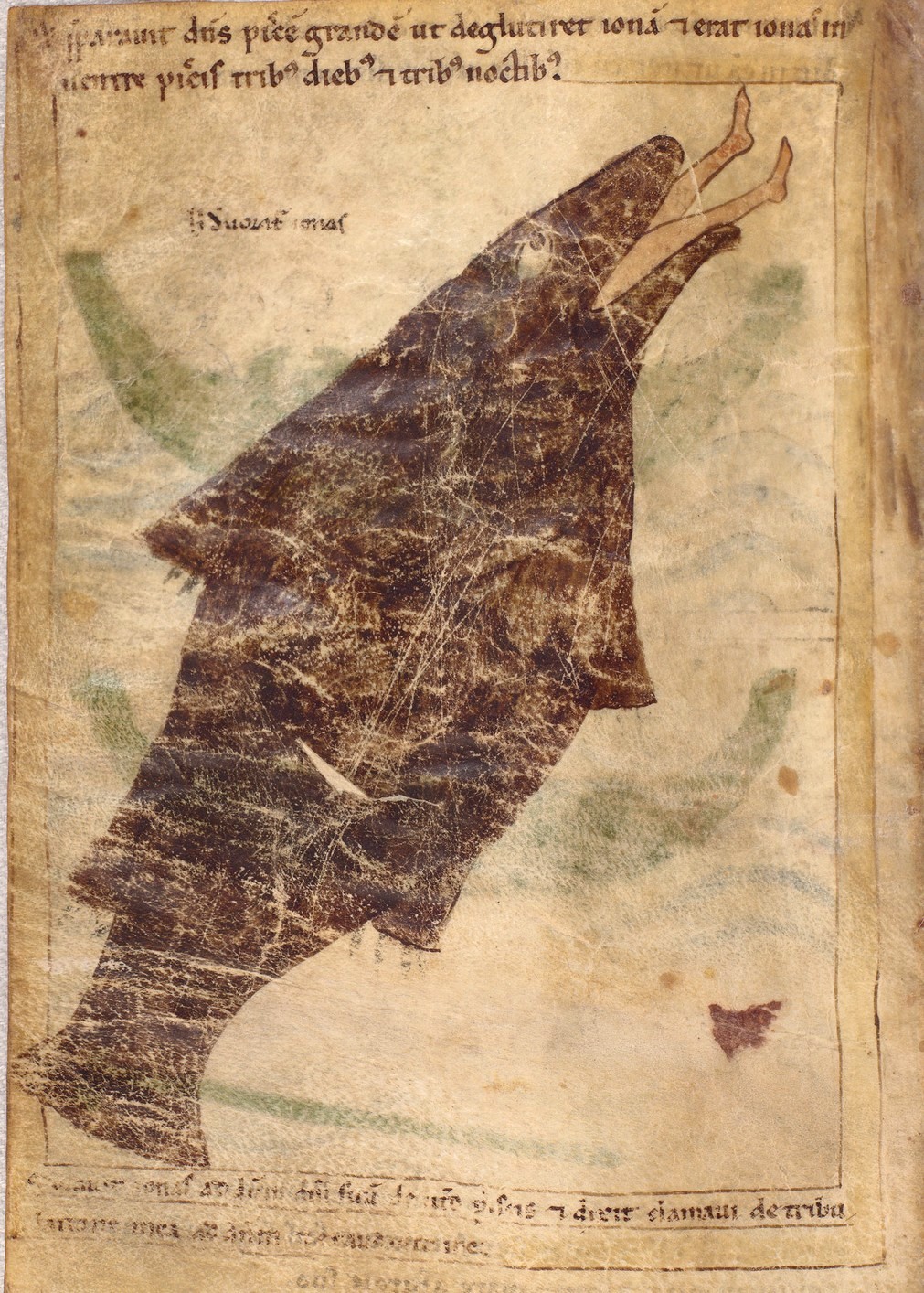 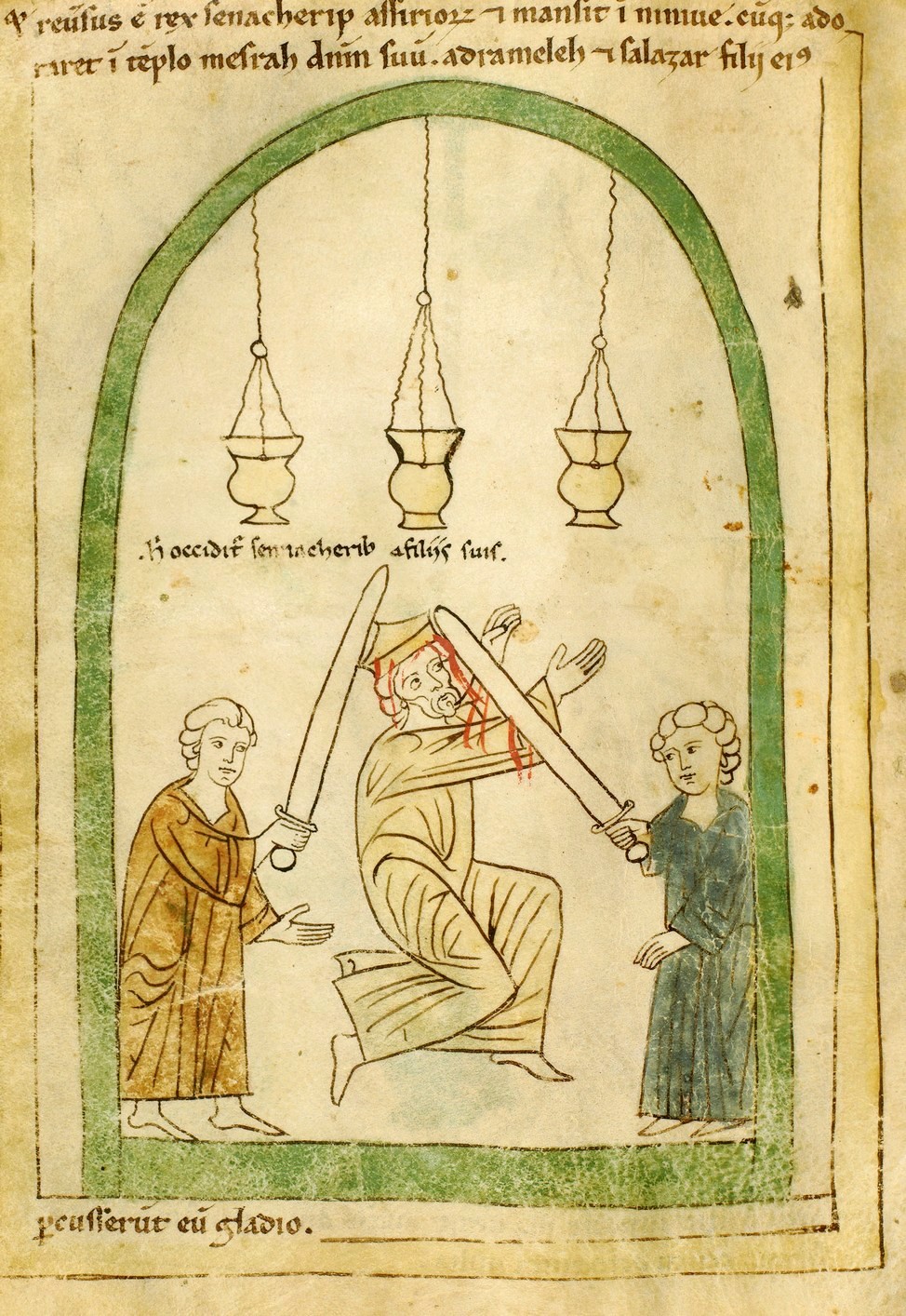 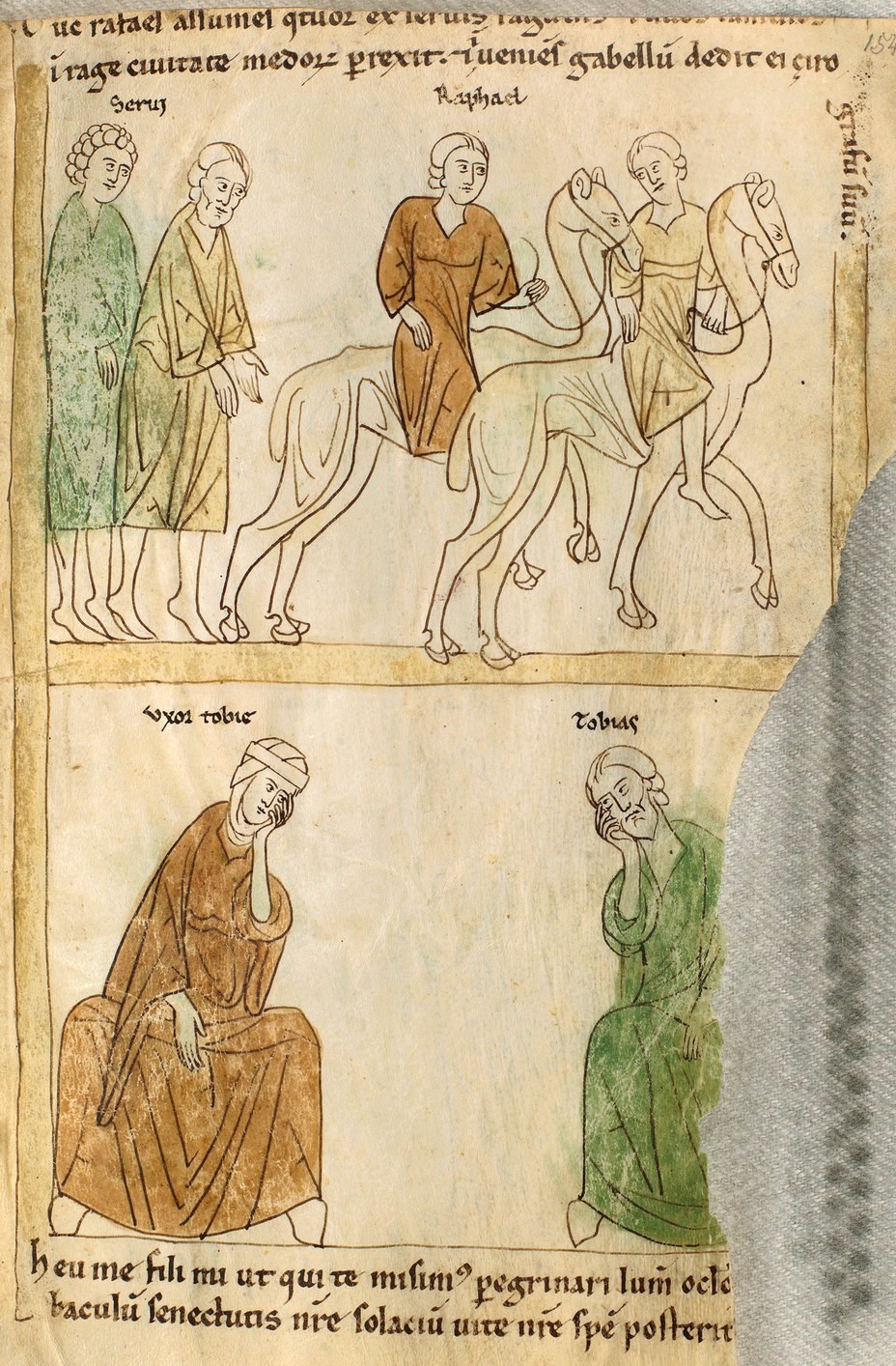