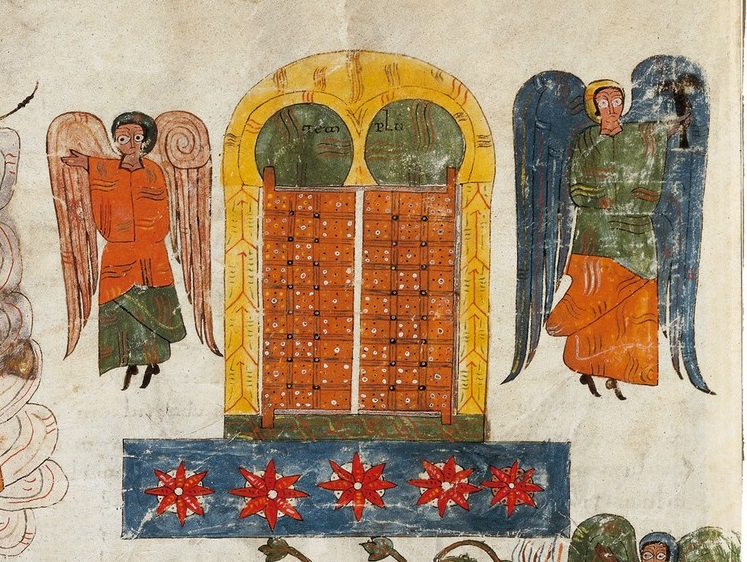 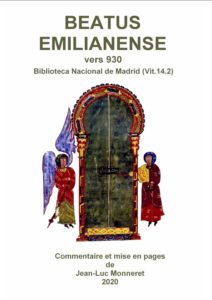 * 144 pages in parchment, Visigothic type letter in two columns of around 34-35
lines per page.

* It originally included more than 60 miniatures of which 30 have been torn out,
keeping now just 27 and the tables of the Antichrist.

Study of Blessed Emilianense by our collaborator Jean-Luc Monneret in which all the images of the manuscript have been digitally cleaned. Press the image to access.

The exact date this manuscript was created is unknown, although for its features it is considered from the first half of the 10th century by Peter Klein, the great expert in Beatus, who studied it in depth in the first and most complete monography ever written on any Beatus. Its name comes from the fact it was kept from the 12th to the 19th century in the 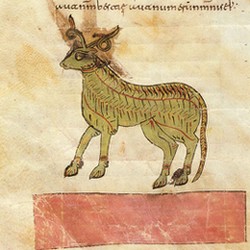 monastery of San Millán de la Cogolla (La Rioja), but it seems it was illuminated in some other scriptorium, possibly Sahagún or Valeránica, having with the manuscripts of the latter one the most affinities according to several experts. It remained for seven centuries in San Millán until it was moved to Burgos in 1821. Then it became the ownership of the writer, politician and great bibliophile Serafín Estébanez Calderón, uncle of Antonio Cánovas del Castillo, who donated it to the library of the Ministry of Promotion upon his death. In 1873 it was temporarily allocated to the Escuela Superior Diplomática in Madrid. Finally, in 1886 it was deposited for its definite custody at the National Library of Madrid.

The codex reached the library deteriorated and mutilated. It is believed that 18 pages are missing from the beginning and some 30 from the middle; 16 pages have been torn out and out of 4, just a small rest remains. In the 19th century it was bound in tanned suede and closing clasps were added.

It was digitalized in 2004, using the most advanced technology. It was freely available until 2007 in the official site “http://patrimonio.red.es/biblioteca/quees_beato.htm” but it ceased to be available without any explanation.

It is considered the most ancient Beatus that has reached us, although it could be later to San Miguel de Escalada’s, if the most ancient datation proposed were to be accepted, which we do not think it probable. It is kept in the Morgan Library of New York.

It is written in Visigothic type letter and, together with the Beatus of Saint-Server is the only one to follow the text of what it is considered to be the most ancient version of the Commentaries 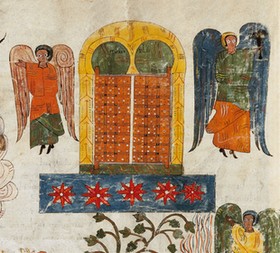 of the Beatus, dated in 776. It is also one of the manuscripts that, due to the contents of its drawings, represent the most ancient branch of the Beatus’s pictorial tradition, and therefore it is supposed to keep higher fidelity with regard to the possible illuminated prototype from the times of the Beatus himself. For all of this it is considered a fundamental codex for the knowledge of the features of the first illustrated version of the Commentary, although some variations may be seen in some miniature that announce the second picotorial version.

However, the style of its images and the technical features of the illustrated pages that have been kept, less oversimplified, like following a more realistic type keeping a much more classical spirit than the rest of the production of those times, and at the same time more primitive, make us think that it is a former version moved further away of the style of the rest of the Beatus. Acording to Camón Aznar, who considers it to be the most ancient of the preserved Beatus: “Its indigenuosity is strong but it is characterized for its very intense elementality that reaches exoticism”.

The manuscript still holds 27 illustrations in different sizes, filling almost always a part of a column and in some cases the complete column, and very seldom the whole page, as it was usual with the Beatus of the first pictorial style. Intense colours on white background have been used: crimson red, turquoise gray and indigo blue, among others. 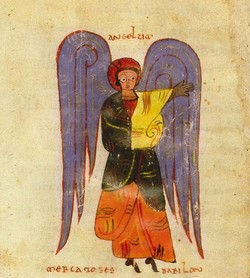 All characters have round face and big almond eyes with very marked corneas and the eyebrows formed by two big lines. The mouth is formed by a simple horizontal stroke, parallel to the one conforming the lower part of the nose. The clothing usually shows puff folds and waving sashes.

Different to ordinary, in the manuscripts of San Millán de la Cogolla, the initials of this Beatus are simply structured, in small or medium typesetting, formed with very stylized vegetal motifs, generally based on canes.

The general impression is very different to that provoked by the Biblia Sacra de León and the Beato de Escalada, considerd as the two codex with a datation very close to that of this manuscript’s, that gives the sensation of being much older, what also seems reasonable as it is also the only one that presents the most ancient version, both in text as in the drawings, of the work of Beato de Liébana.

If compared with the two other Beatus from San Millán de la Cogolla, the one of the library of the Real Monasterio del Escorial and the one of the Academy of History of which we can be certain that they had been created in the scriptorium of that monastery, we can conclude that they were produced before this codex got there as, in spite of also belonging to the most ancient branch of the Beatus pictorial tradition, both for their differences in style and for the fact that they do not correspond to the same version of the text, we do not appreciate in them the influences of this Beatus, although being unquestionably older. 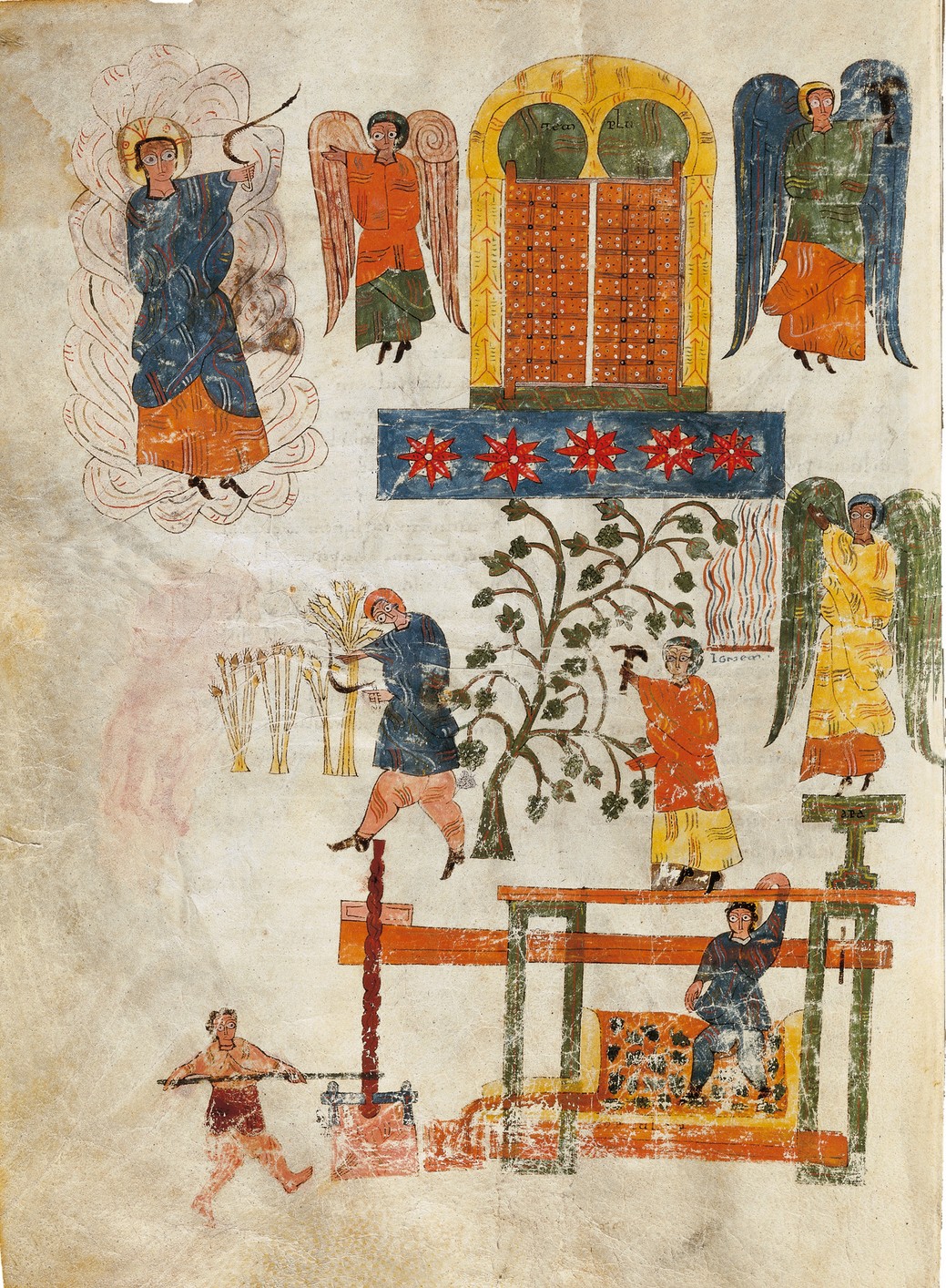 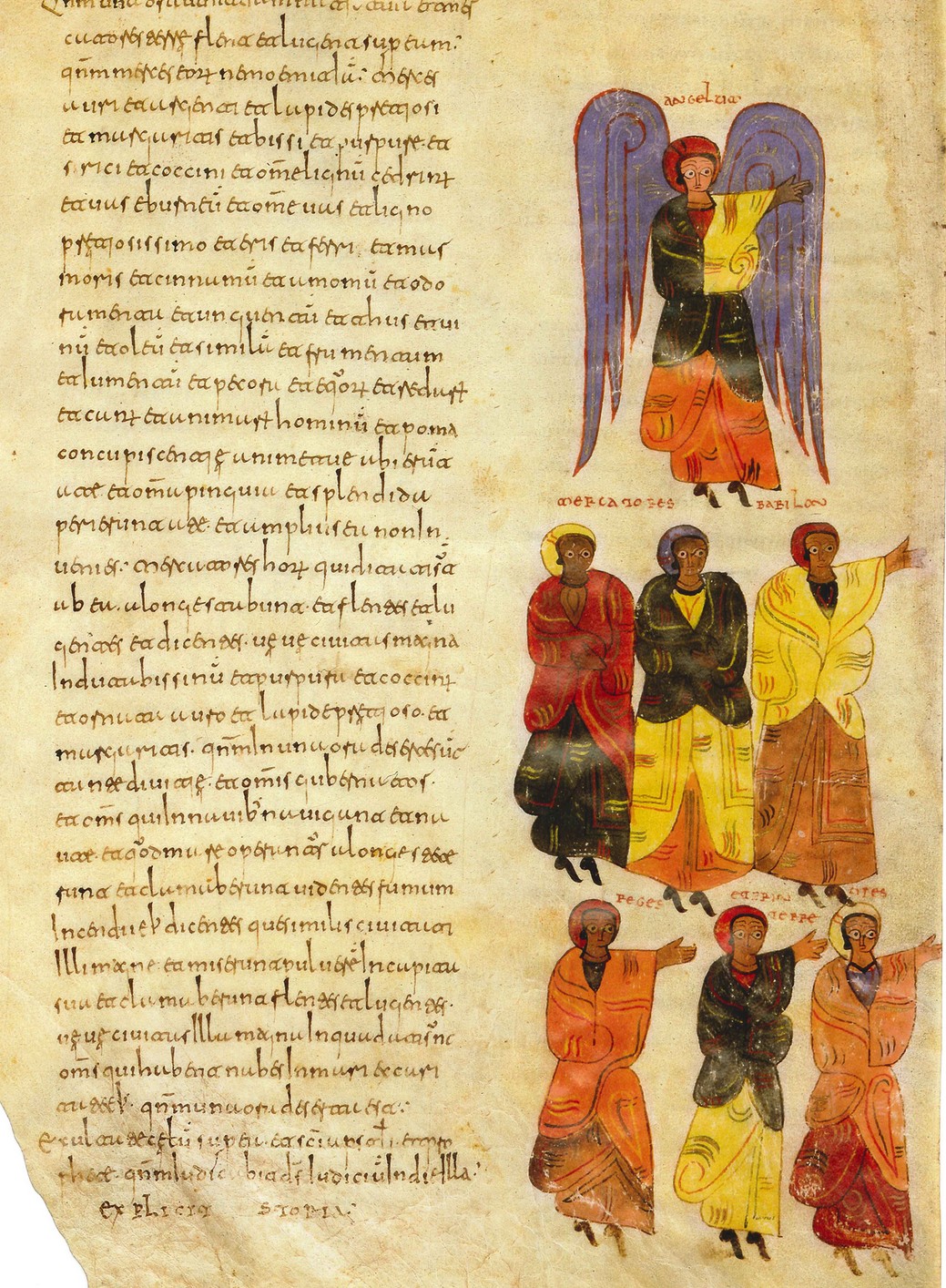 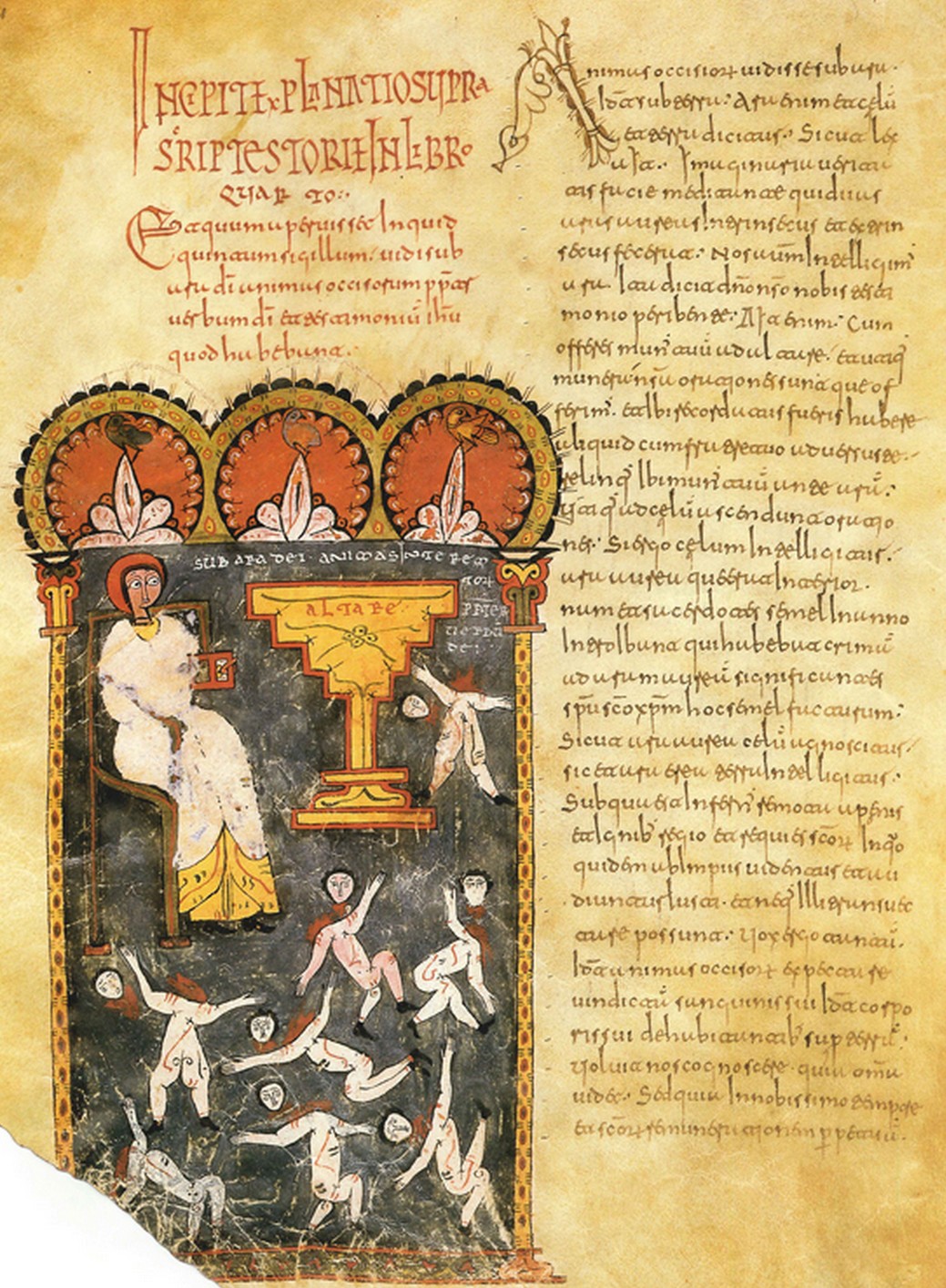 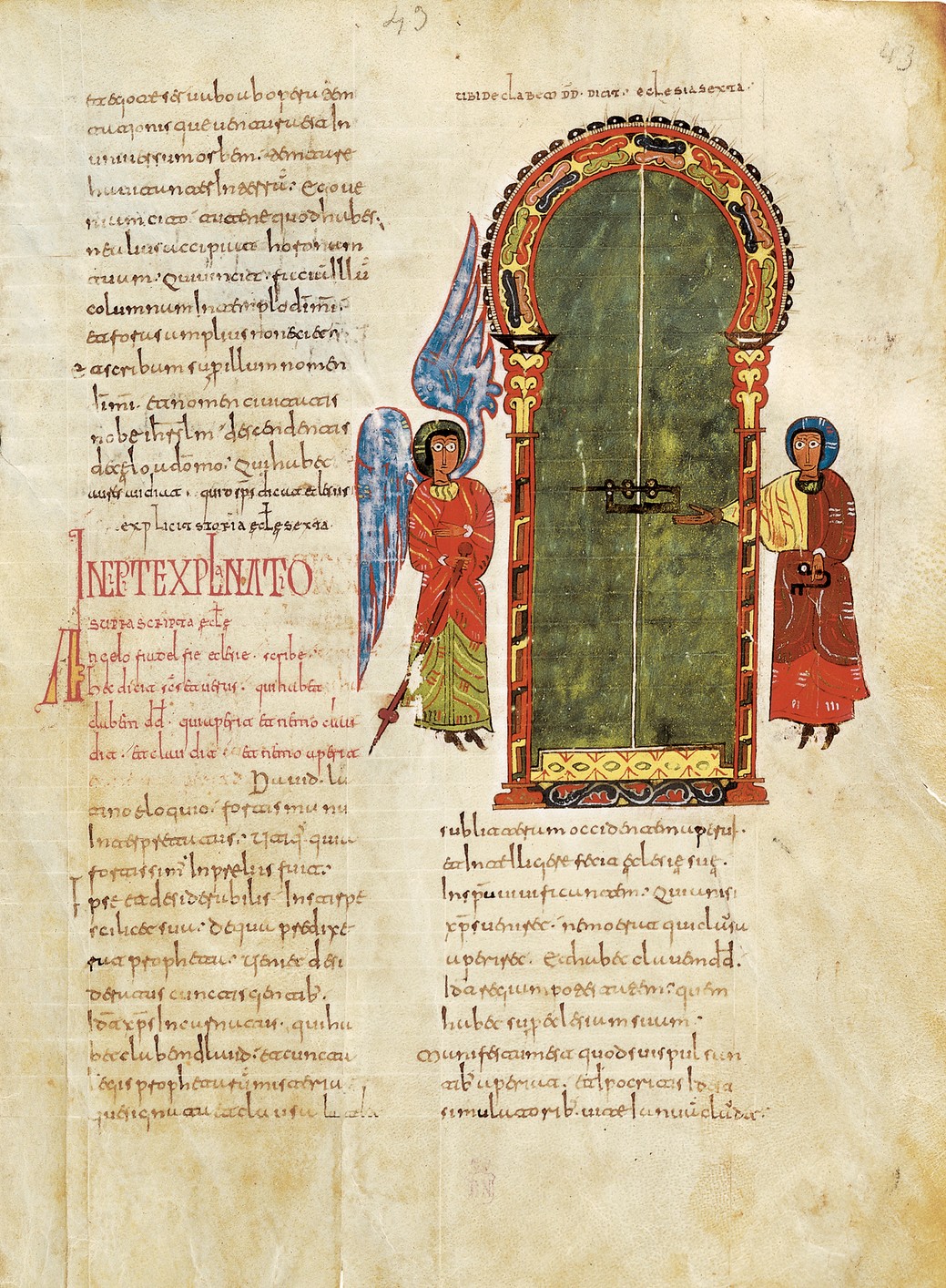 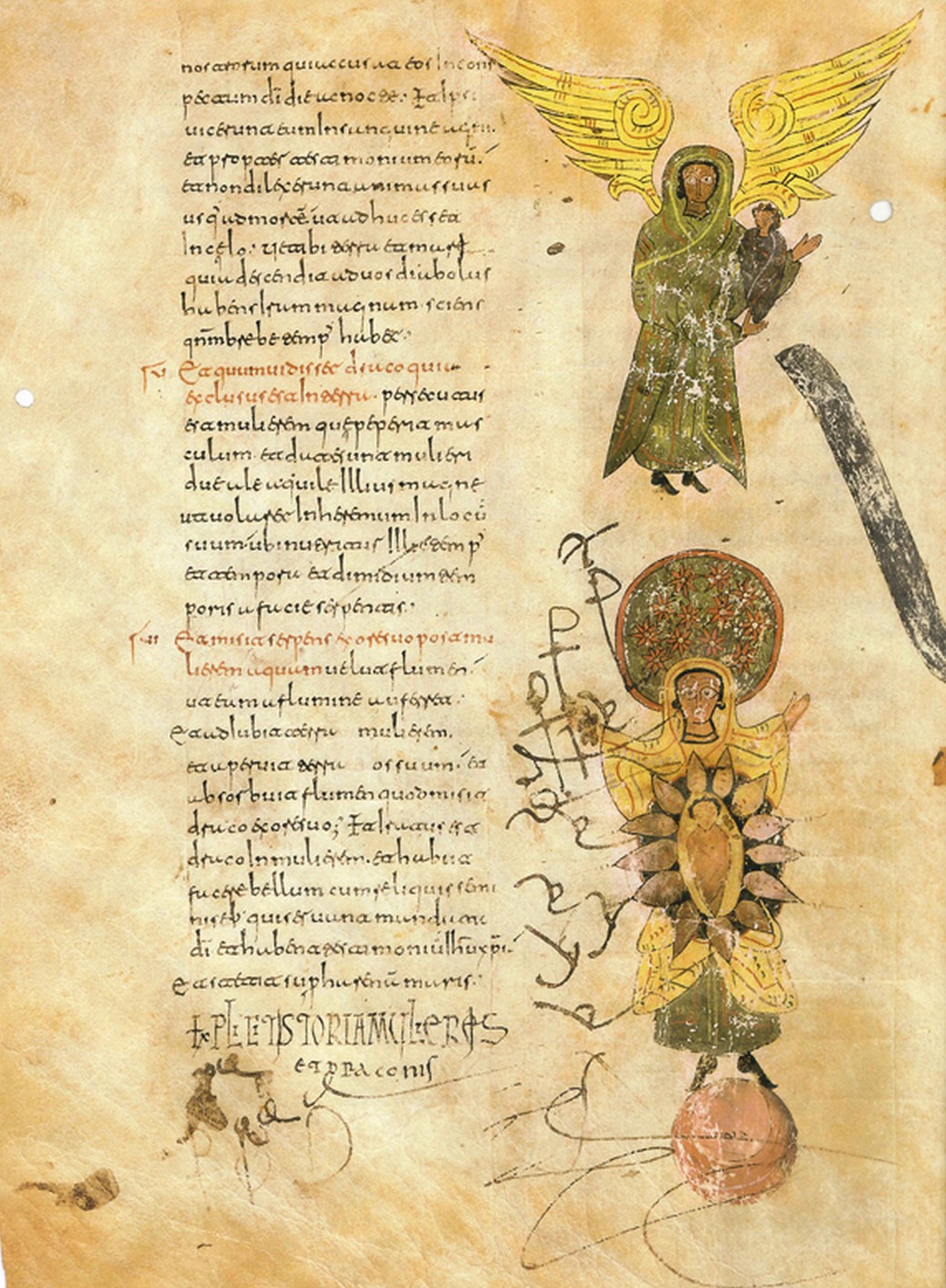 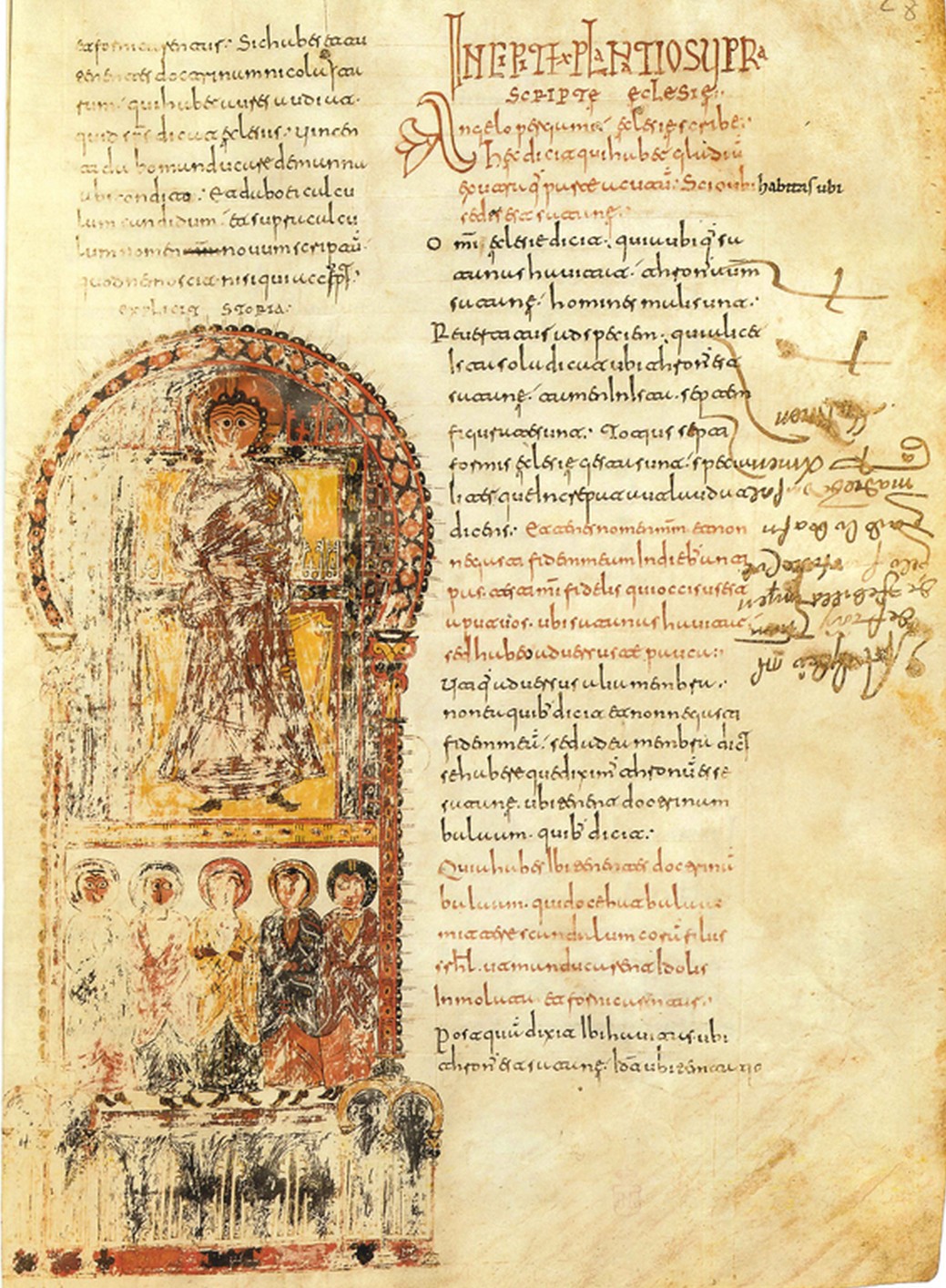 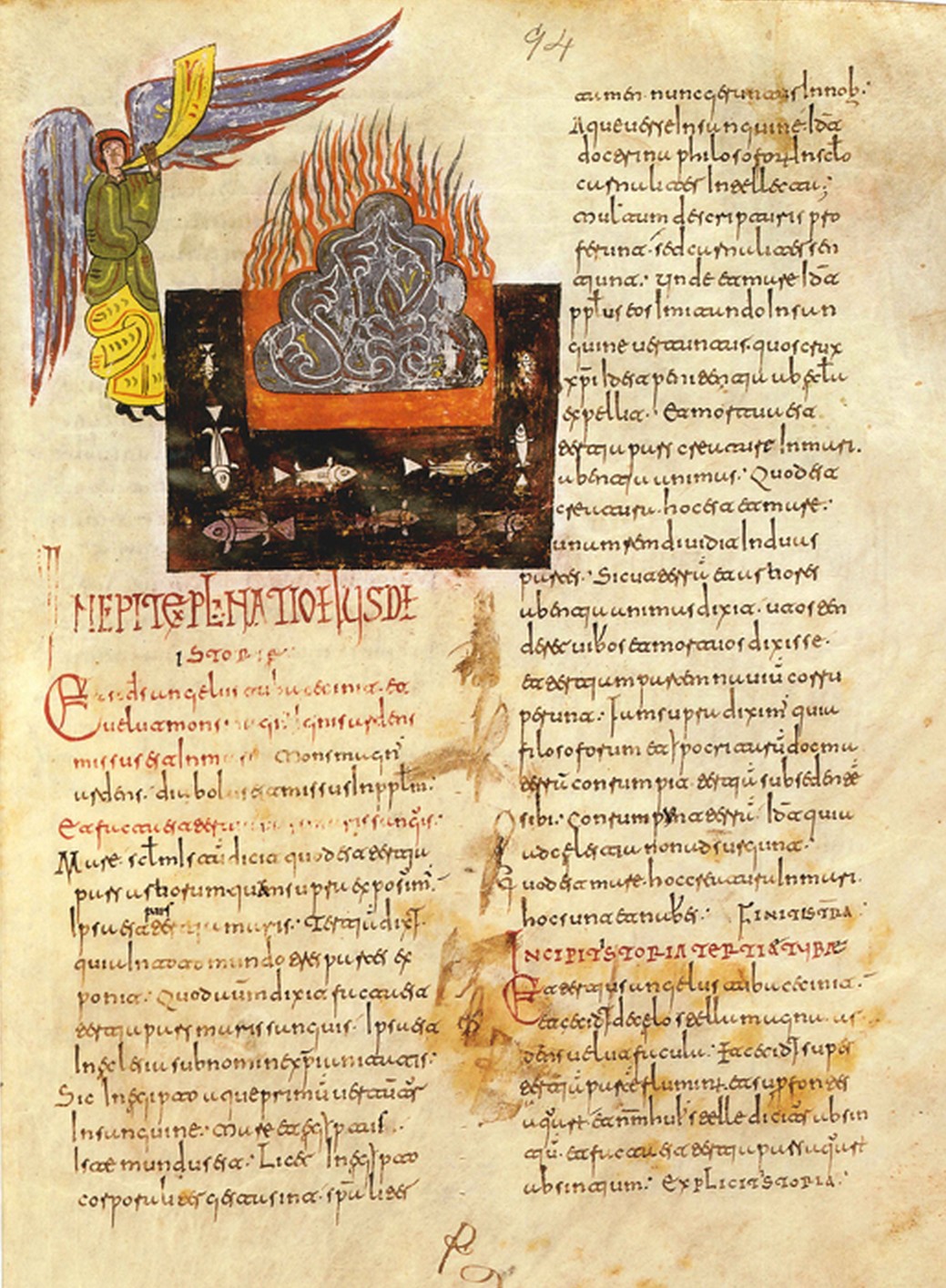 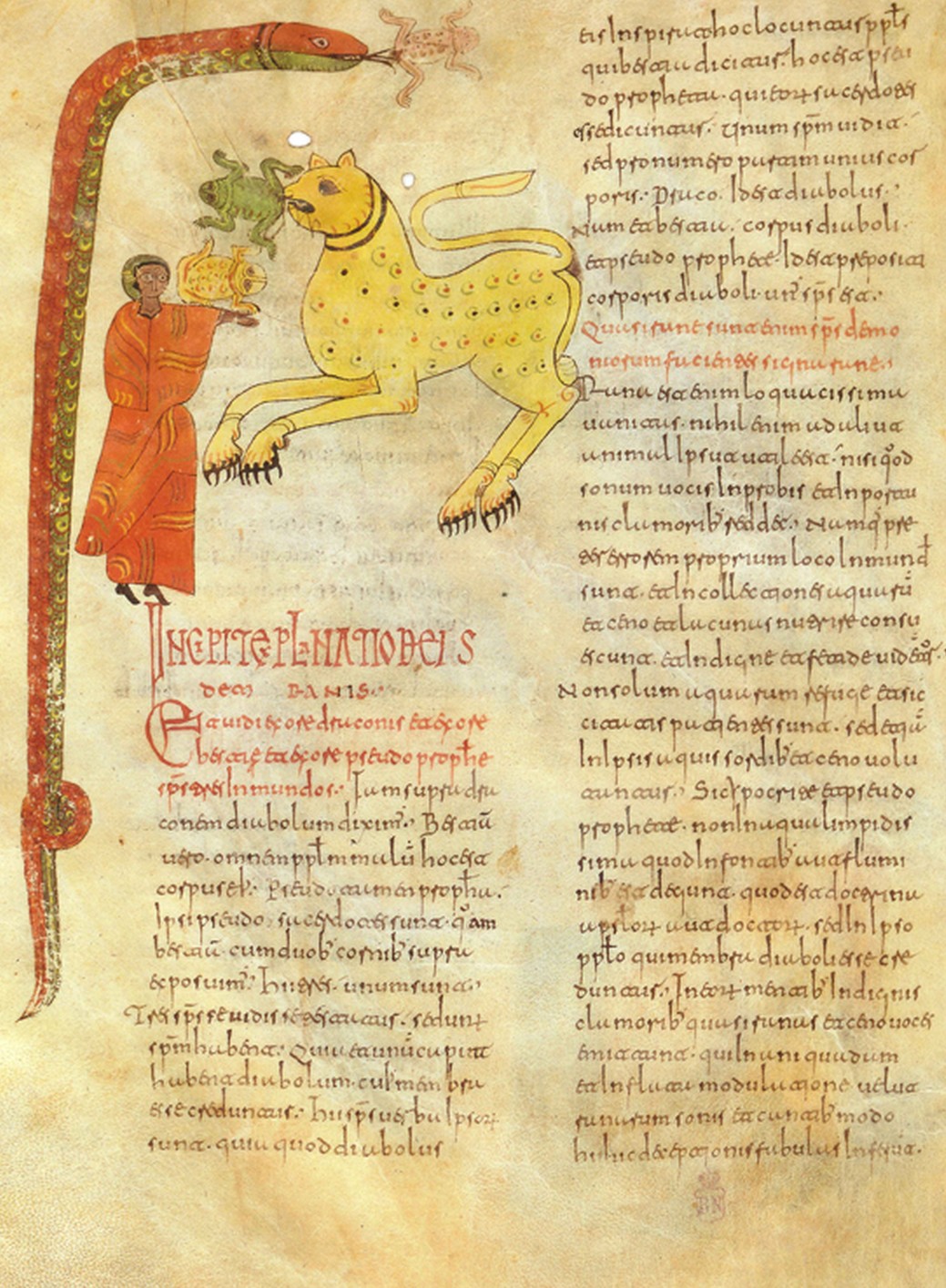 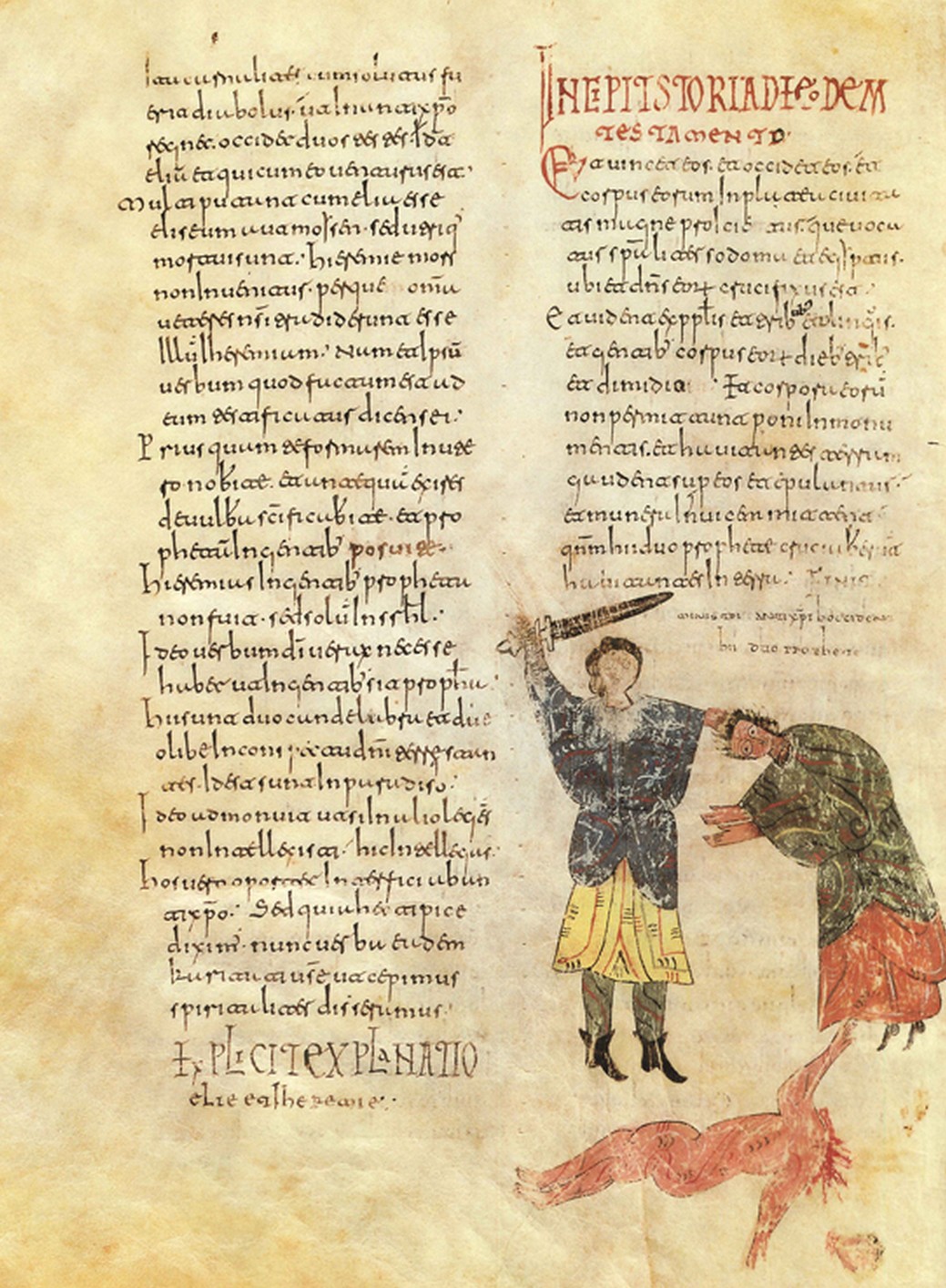 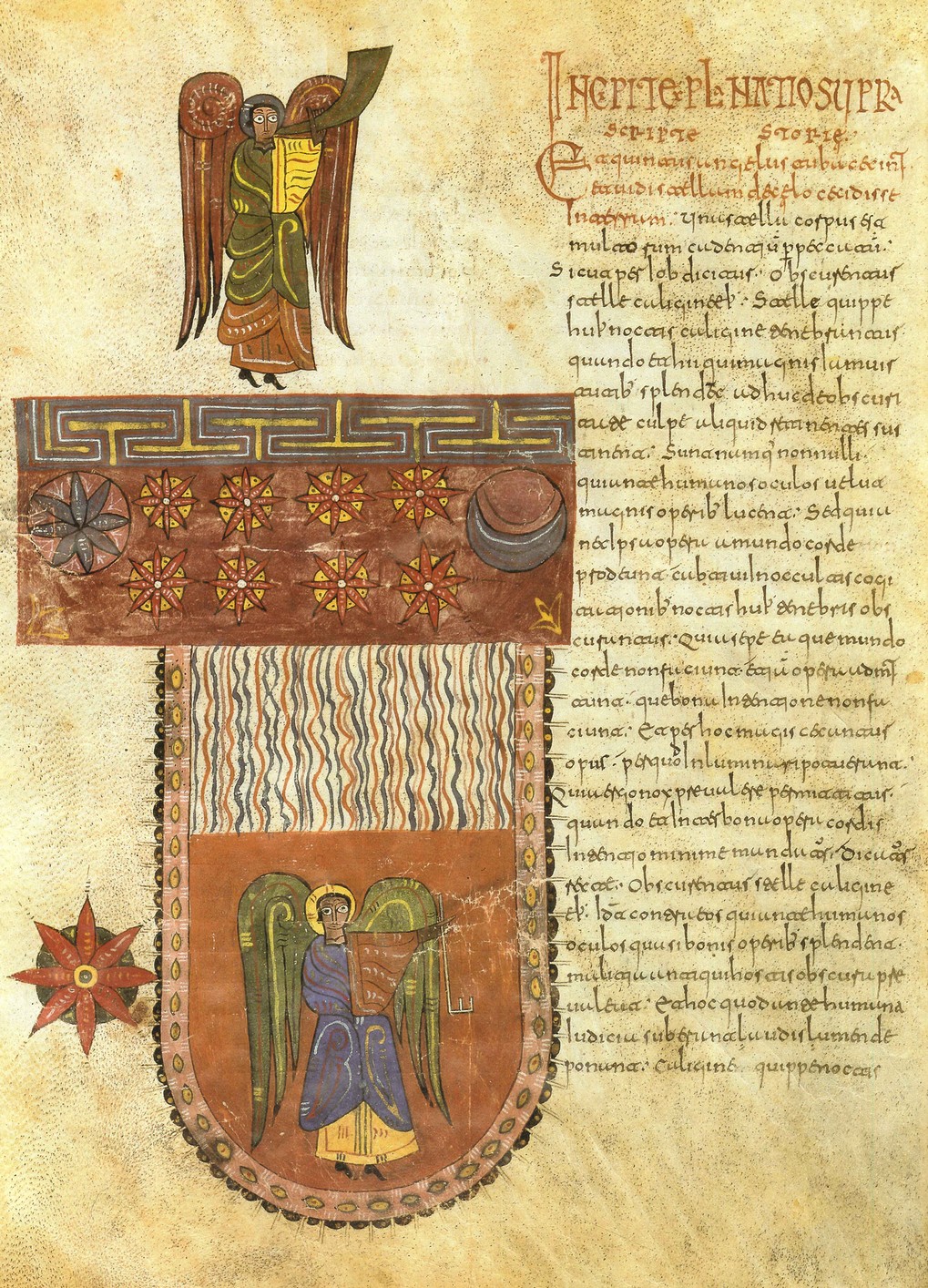 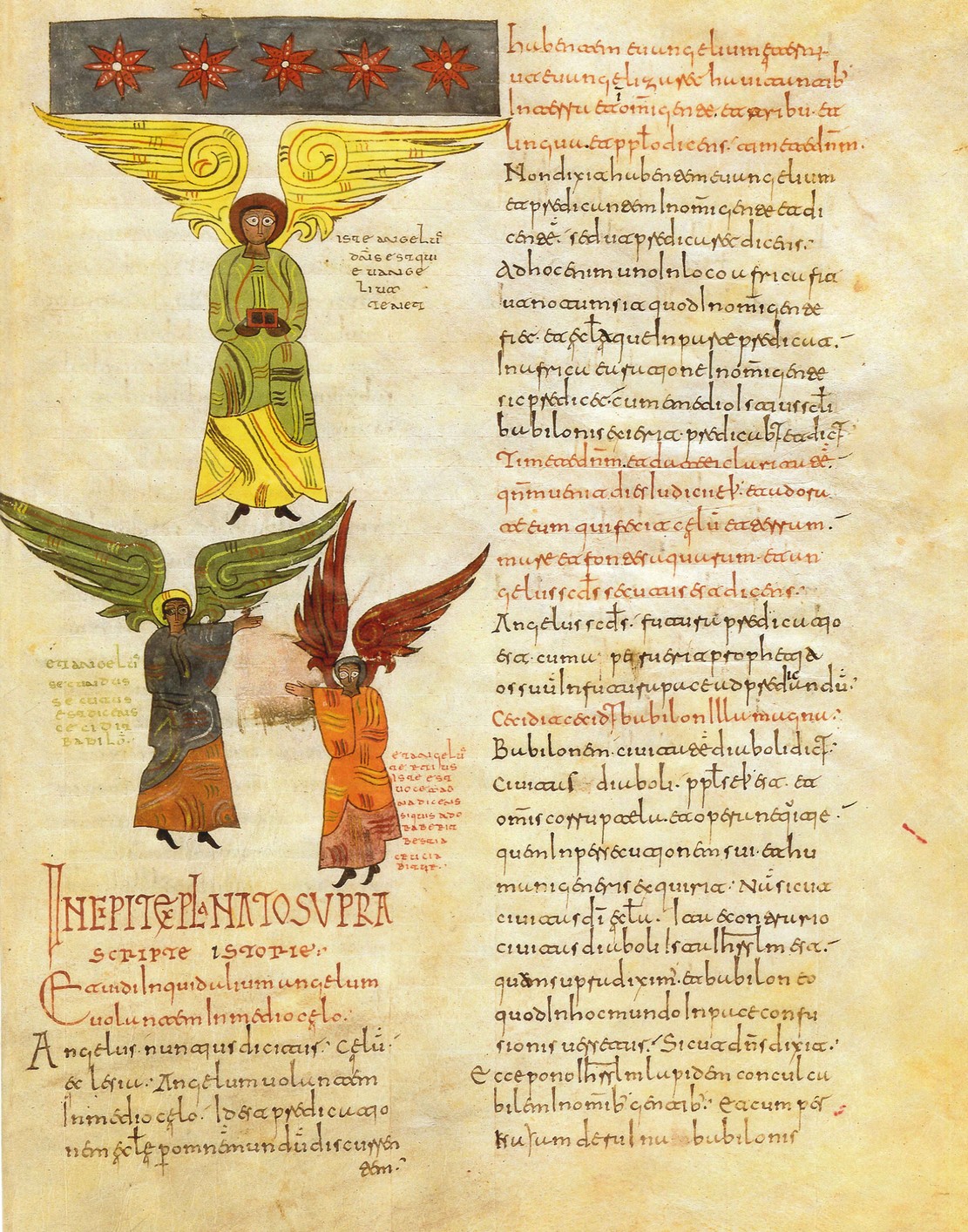 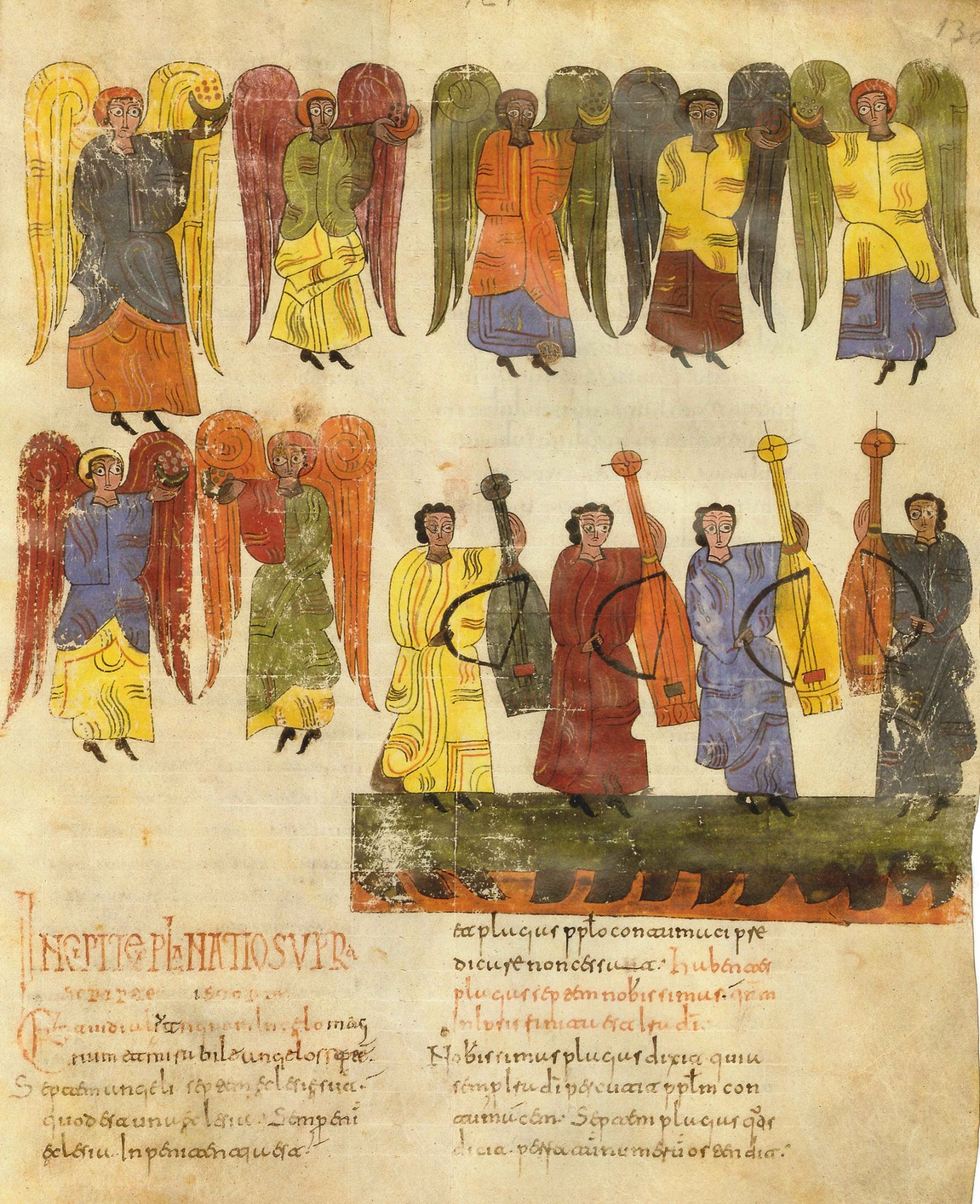