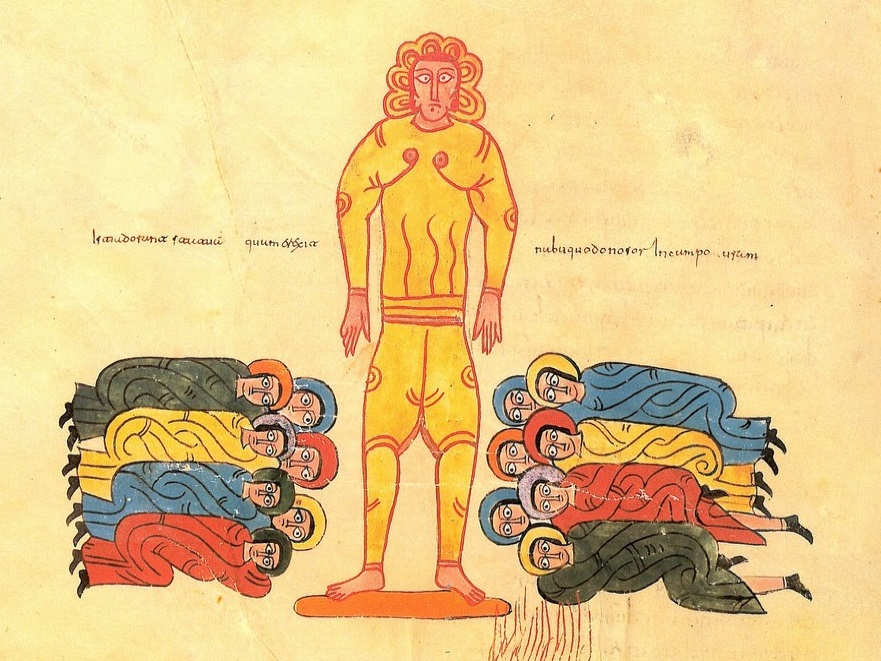 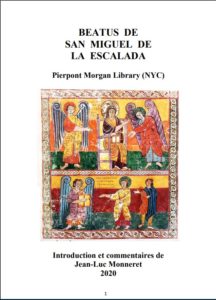 Study of the Blessed of San Miguel de Escalada by our collaborator Jean-Luc Monneret in which all the images of the manuscript have been digitally cleaned. Click the image to access.

We know it was produced by the archipictor Magius, commissioned by the abbot of the Leonese monastery of San Miguel de la Escalada.The author’s name appears twice, once, in a long coda and then at the end of the text. Its datation 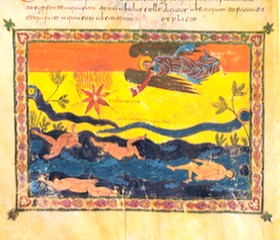 is questioned as most authors place it in 922, but Camón Aznar suggests 958 and, according to John Williams, who in the last years has made a thorough study, it was written in 945. There is also a controversy about its scriptorium of origin. Initially it was believed that its origin was San Miguel de Escalada but it is more likely that it is Salvador de Tábara, as that was the place where Magius worked and was burried in 968.

This Beatus stayed in San Miguel de Escalada at least until the 14th century, in hands of the Archbishop of Valencia, Martín Pérez de Ayala who, upon his death in 1566, donated the manuscript to the military order of Santiago in its master’s residence of Uclés. It remained there until 1837, when the properties of the Church were confiscated in Spain. Around 1840, a merchant by the name of Roberto Frasineli, handed it over to the manuscript collector Guillermo Libri Carucci, in exchange of an ancient silver clock, who by then had slipped through the Pentateuch of Tours in France and before, in 1852 he sold it to the Count of Ashburnham. In May 1897 it was acquired by the collecor Henry Yates Thompson from London and on June 3rd 1919 it was acquired in the lot 21 by the intermediary Quartich, for the Pierpont Morgan Library in New York.

With this manuscript Magius begins the Beatus’ second pictorial style that, with Tábara’s, created by Munnio in an unknown monastery, are the two most meaningful pieces 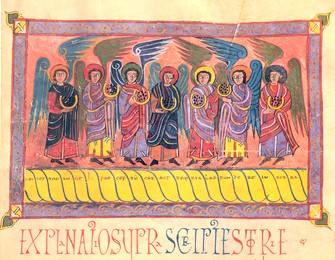 of art of this series, that also includes a codex of great interest like the Beatos de Valcavado, from the Gerona Cathedral and Seo de Urgell. Besides, the Beatus of Tábara includes at the end two pages that let us know that there was another beatus started also by Magius, although he died in 968 without having it finished for what it was concluded two years later by Emeterio and the nun Ende.

In this series completely changes not only the utilization of colours and space that up to then were usual in beatus, but also the kind of colorings used, that cease to be water based paints, and start to be used over an often wax varnished background; colours bound with new elements, like egg, honey or glue, that transform the natural colours generating large smooth coats of paint and improving significantly the quality of the whole, offering at the same time a great chromatic harmony based on subtle colours and a strong chromatic refinement through the juxtaposition of vivid hues in contrast. Besides, there are the double page miniatures, very rarely seen in the previous illustrated version.

But, besides all this technique it is applied in a new pictorial space, arranged in stripes of irregular width, with figures without any perspective nor third dimension, due to the little interest to reflect reality, generating a spiritual environment as in a sort of religious surrealism, fully adequate for the message the beatus intends to convey in its Commentary on the Apocalypsis.

The result shows the maturity attained in the middle of the 10th century with the Hispanic miniature, that can only be a consequence 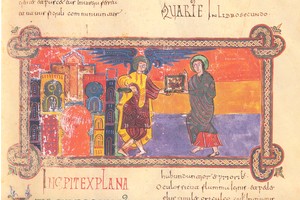 of an over three hundred years old tradition -at least from the scriptorium of Seville in times of Isidoro- along which, different influences became incorporated, within an eclectic spirit, according to the likings of each artist. Because of this ease of integration of any artistic current inherited from the Visigothic times, the different authors that have studied it have been able to find in this beatus remiscences that go from Early Christian ones to Visigothic, Coptic, Northafrican and even Nordic, Irish, Carolingian and a lot of Islamic reflections, besides, of course its relation with the former Mozarabic miniature.

Regarding its content, Magius has been attributed a series of new images “to announce the tremendous trial that the world awaits for the glory of the Father, the Son and the Holy Ghost”, as he himself explains in this work’s coda. These images that became part of beatus later than San Miguel de Escalada, include, among others, the portraits of the evangelists and the genealogical tables that are not contained in the manuscripts of branch I and also adds the Illustrated Commentary on the Book of Daniel.

Both for its quality and the excellent state of preservation but specially for the stylistic changes and the content it provides, and for the explanation that Magius offers about them and the influences they brought into later manuscripts, the beatus of San Miguel de Escalada is a fundamental codex to 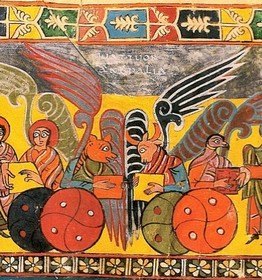 know the history and charateristics of high medieval Hispanic miniature, as it lets reach a series of conclusions we think of great interest. 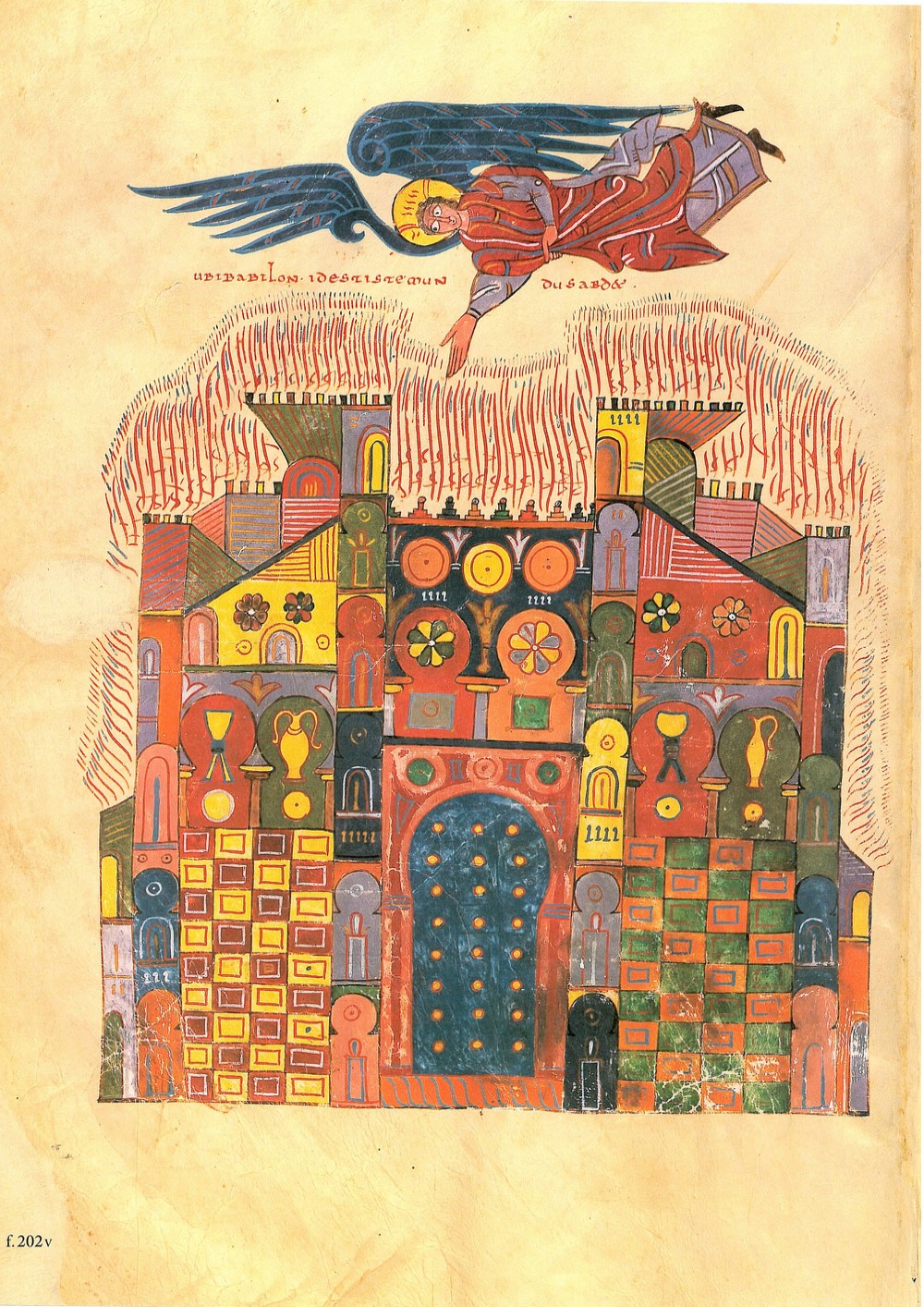 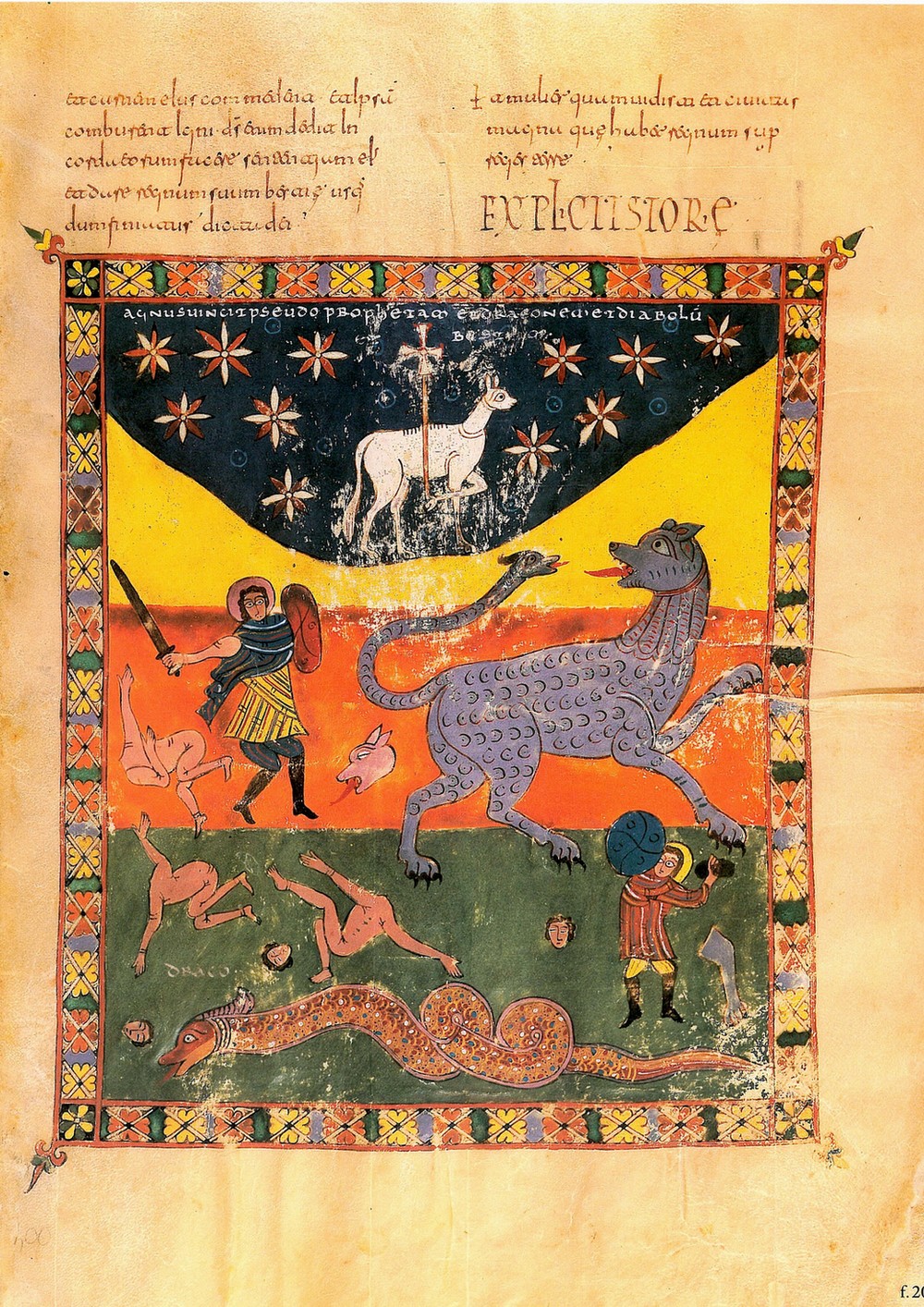 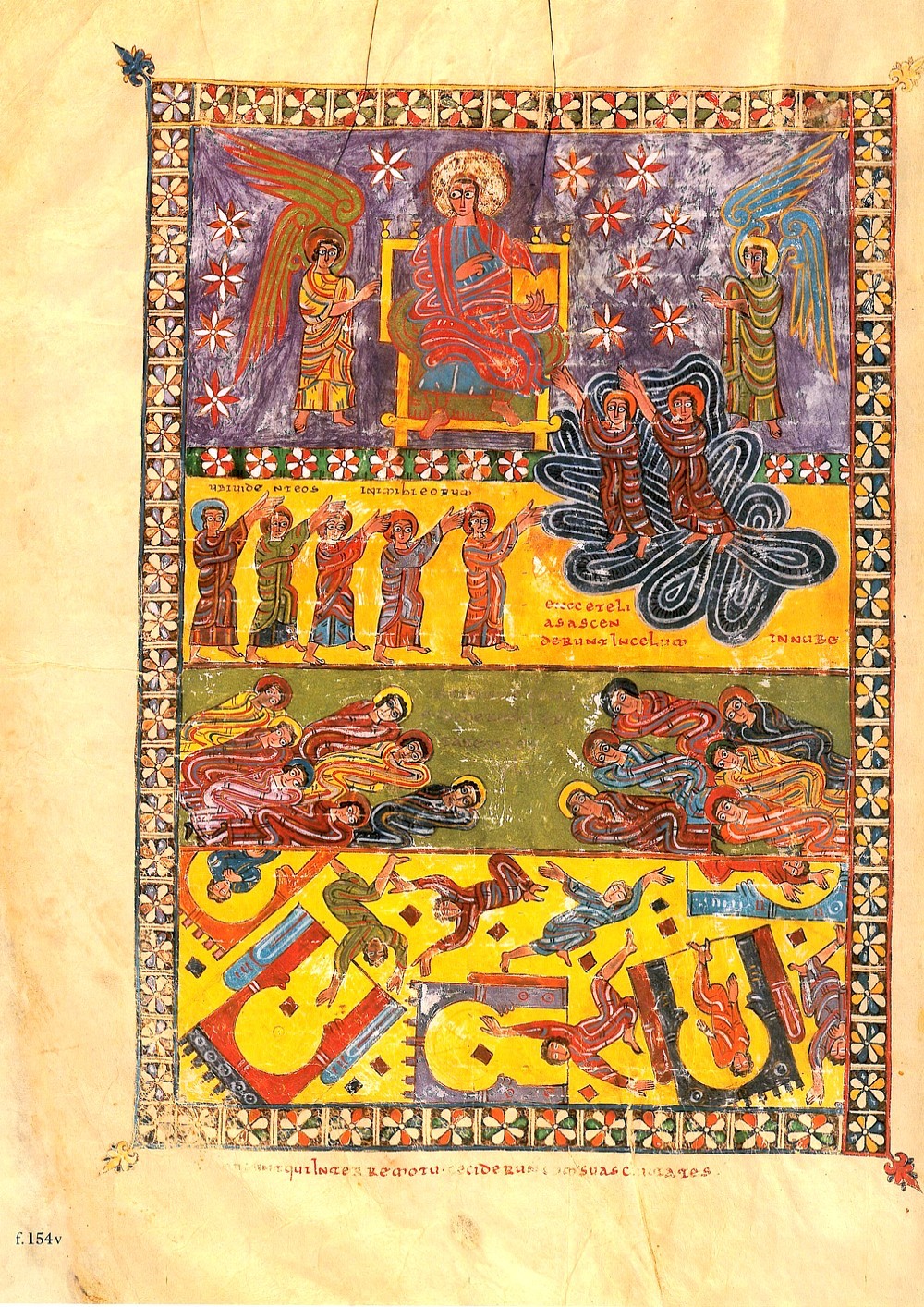 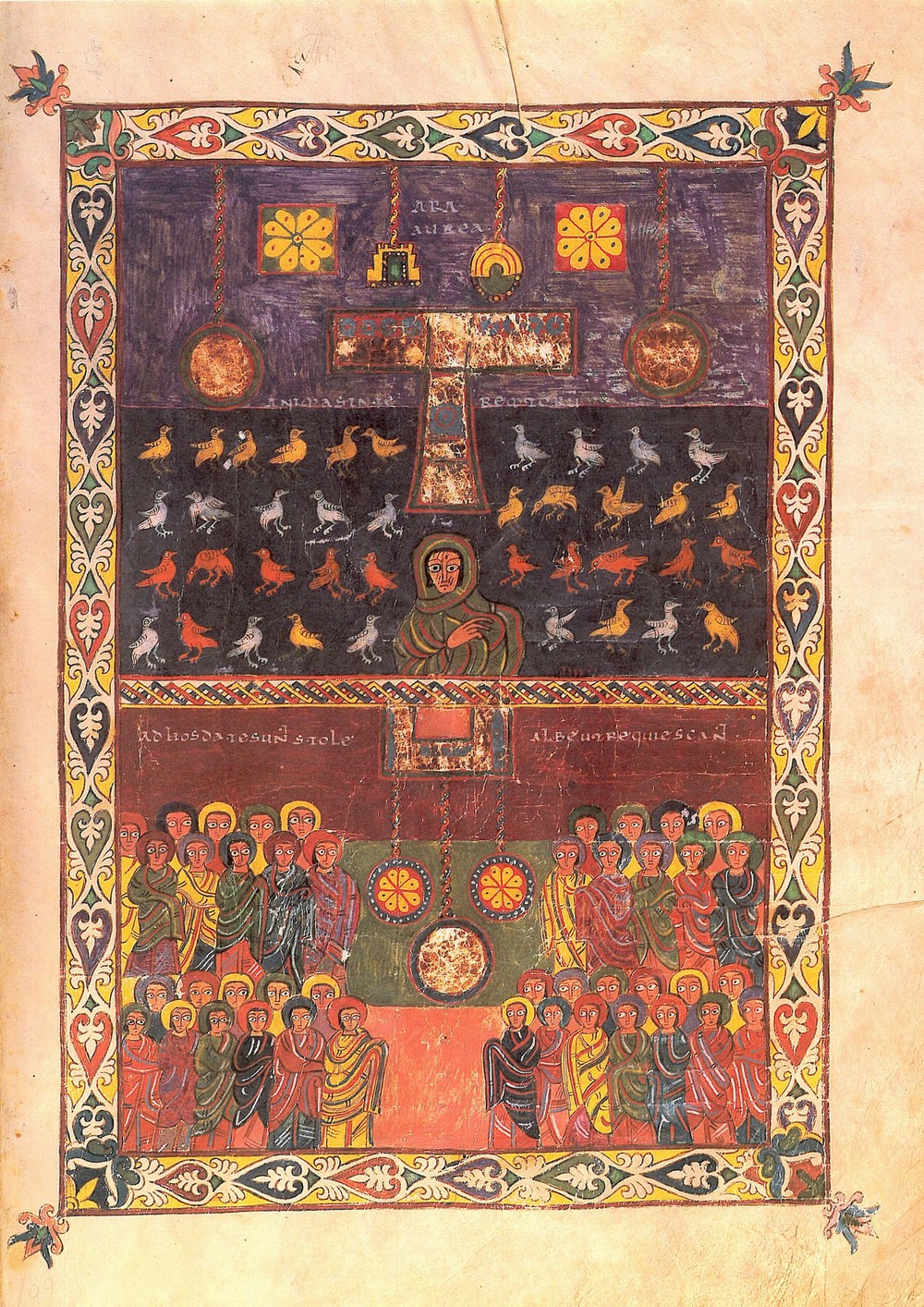 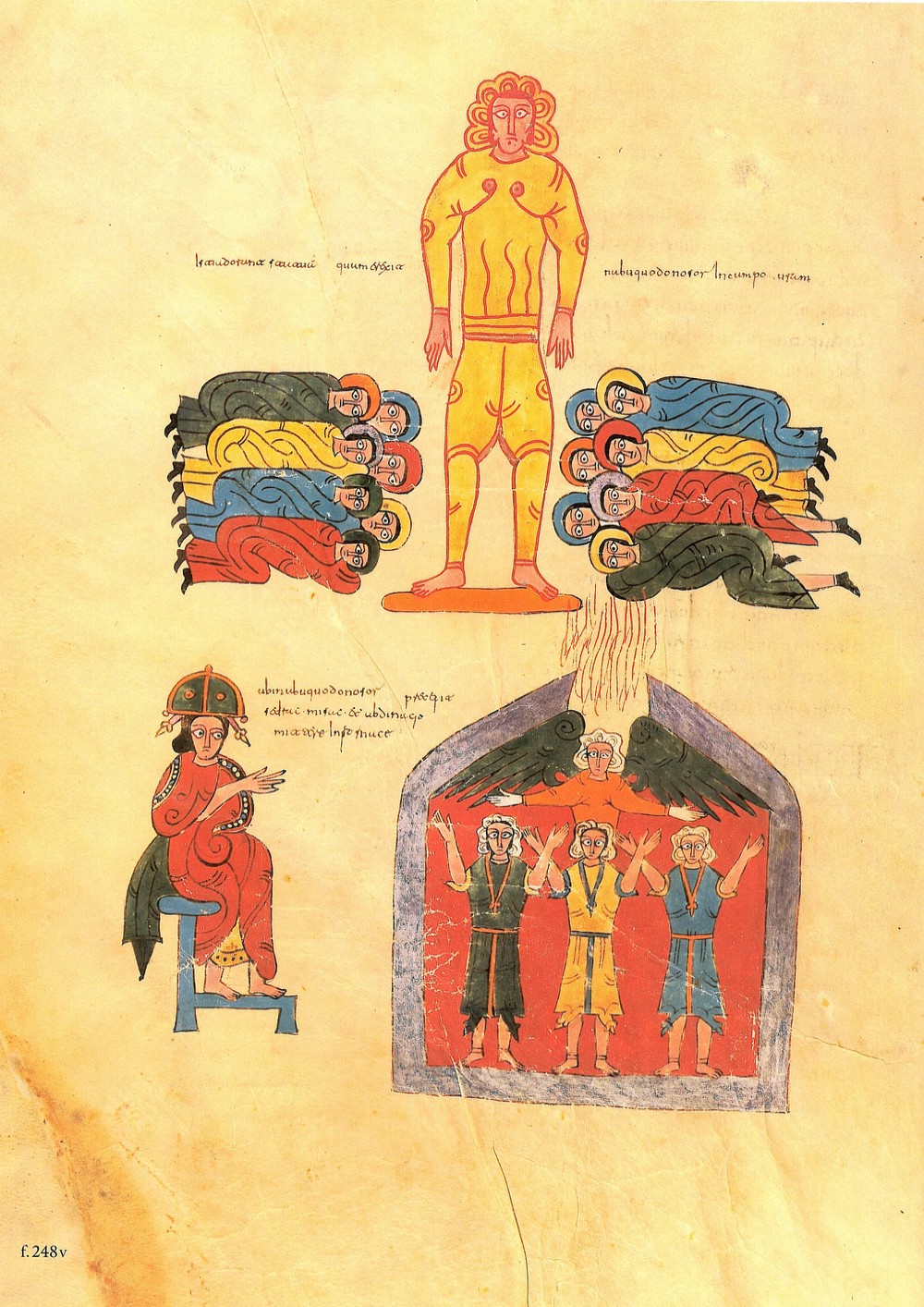 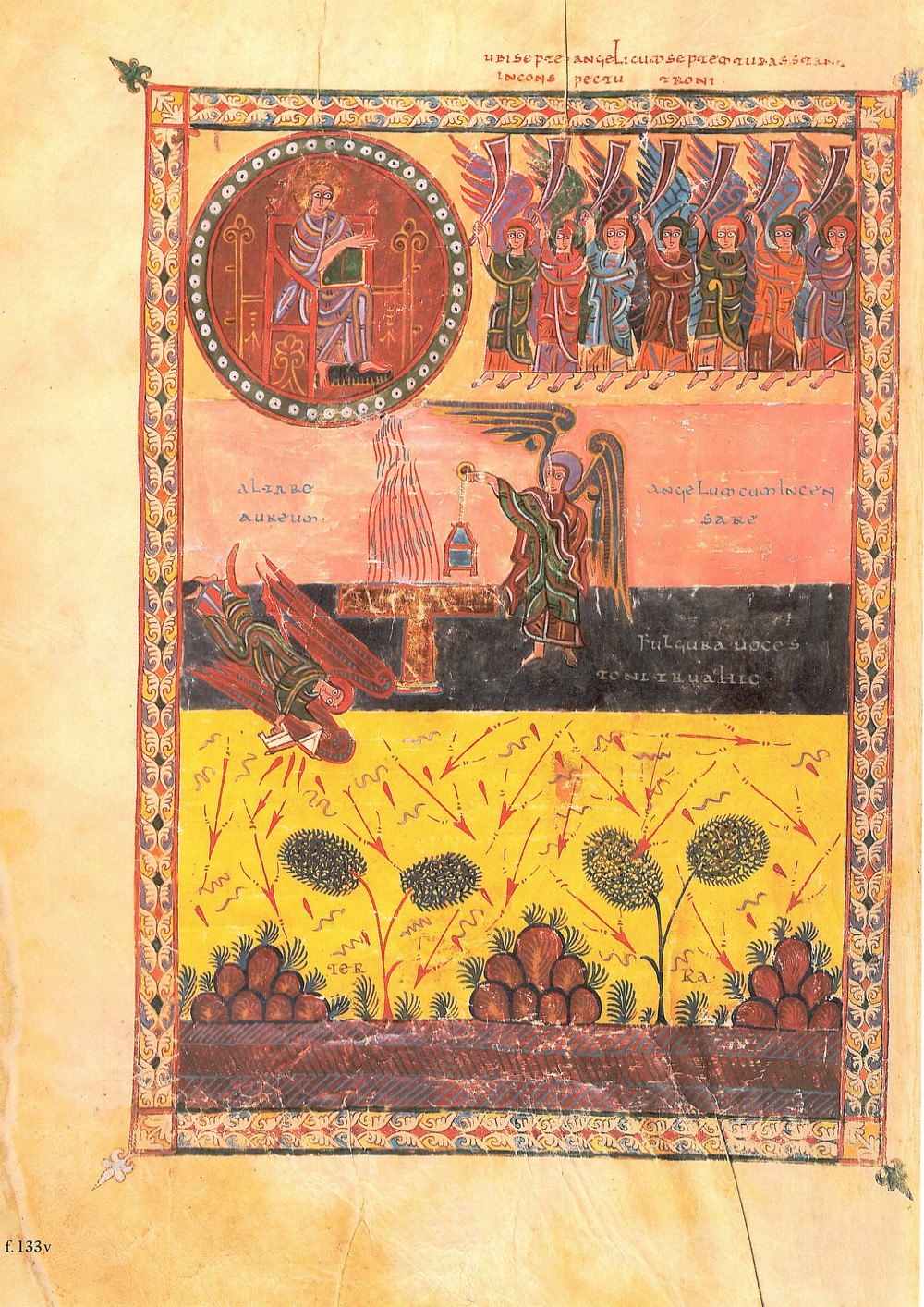 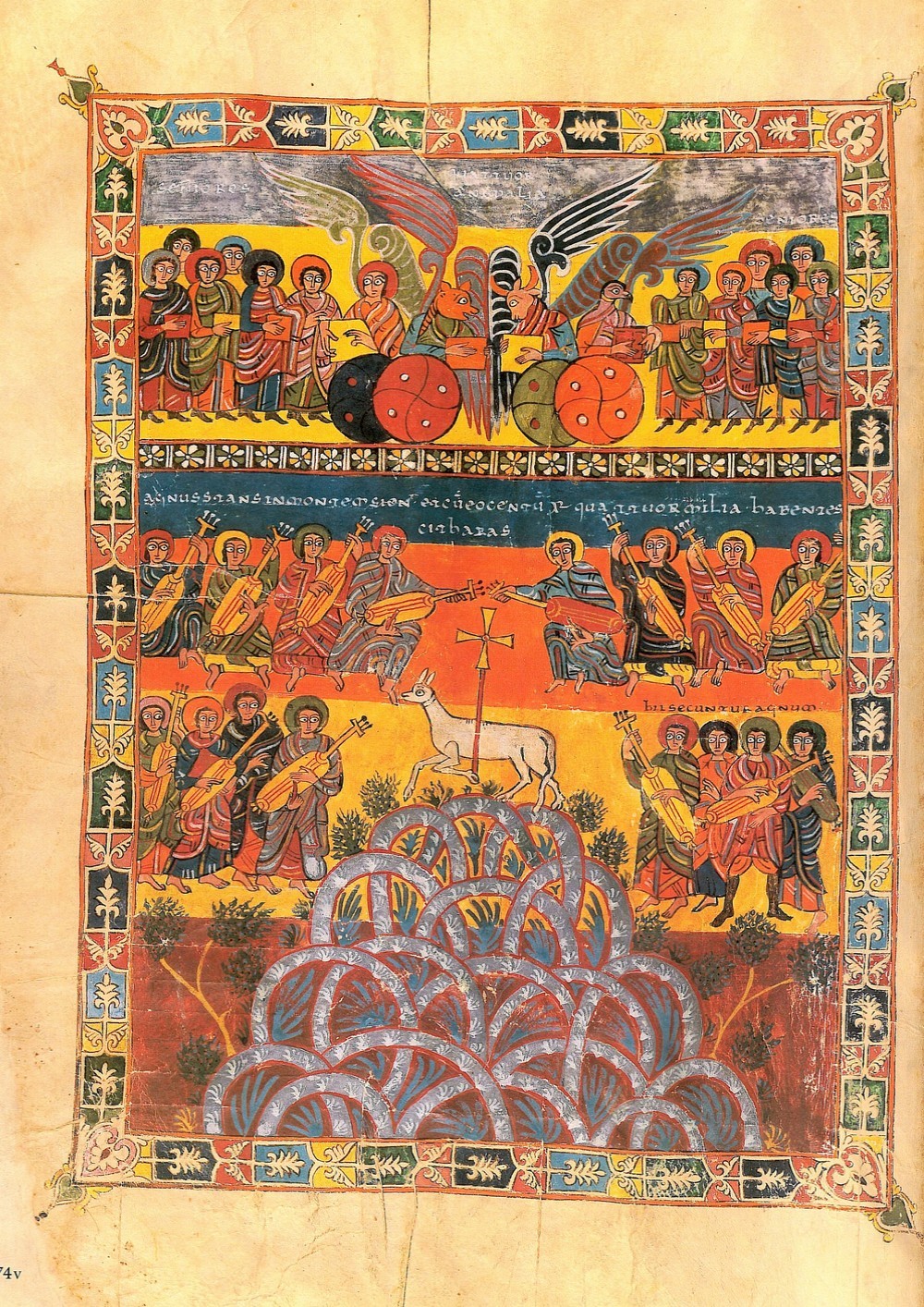 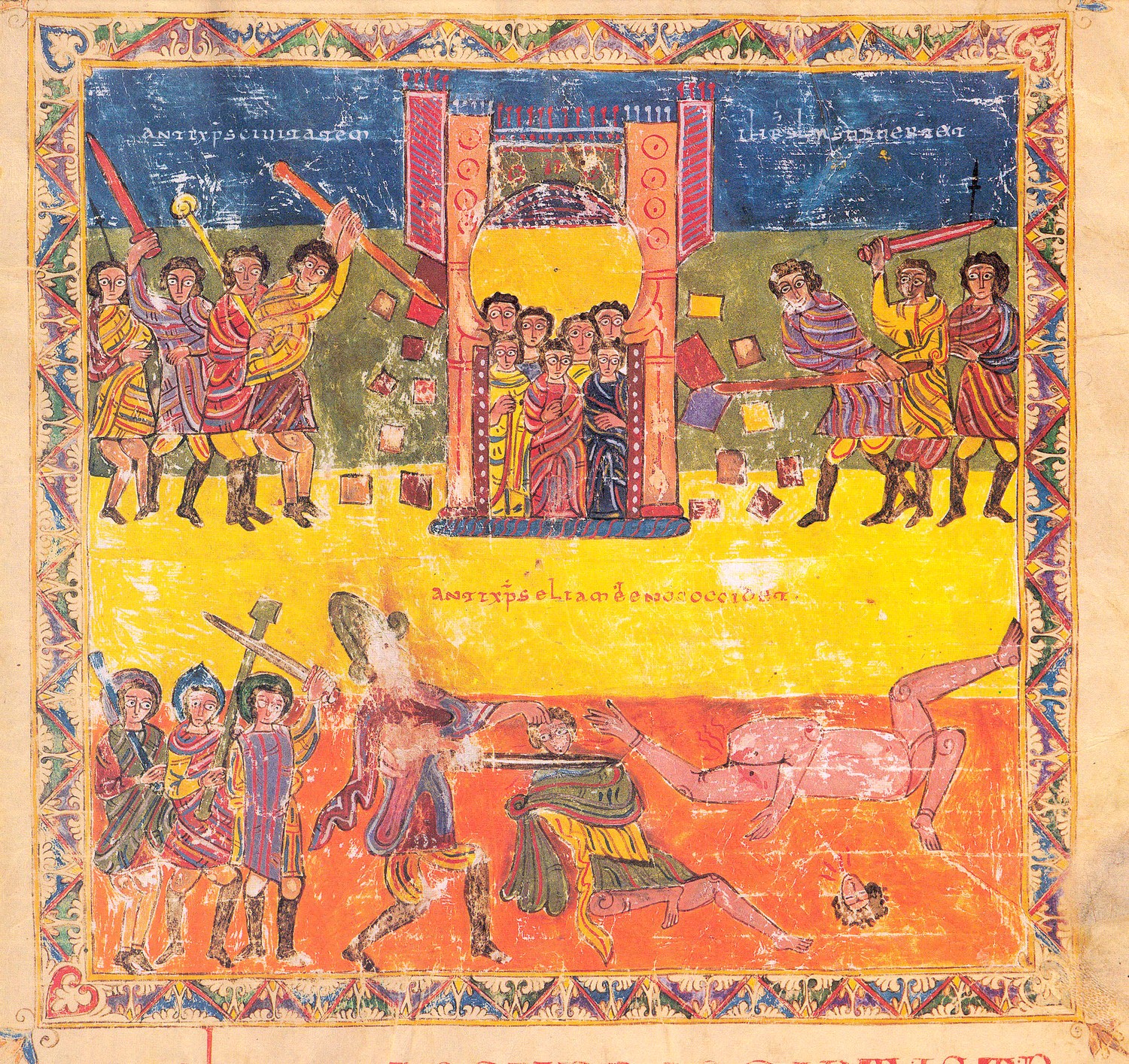 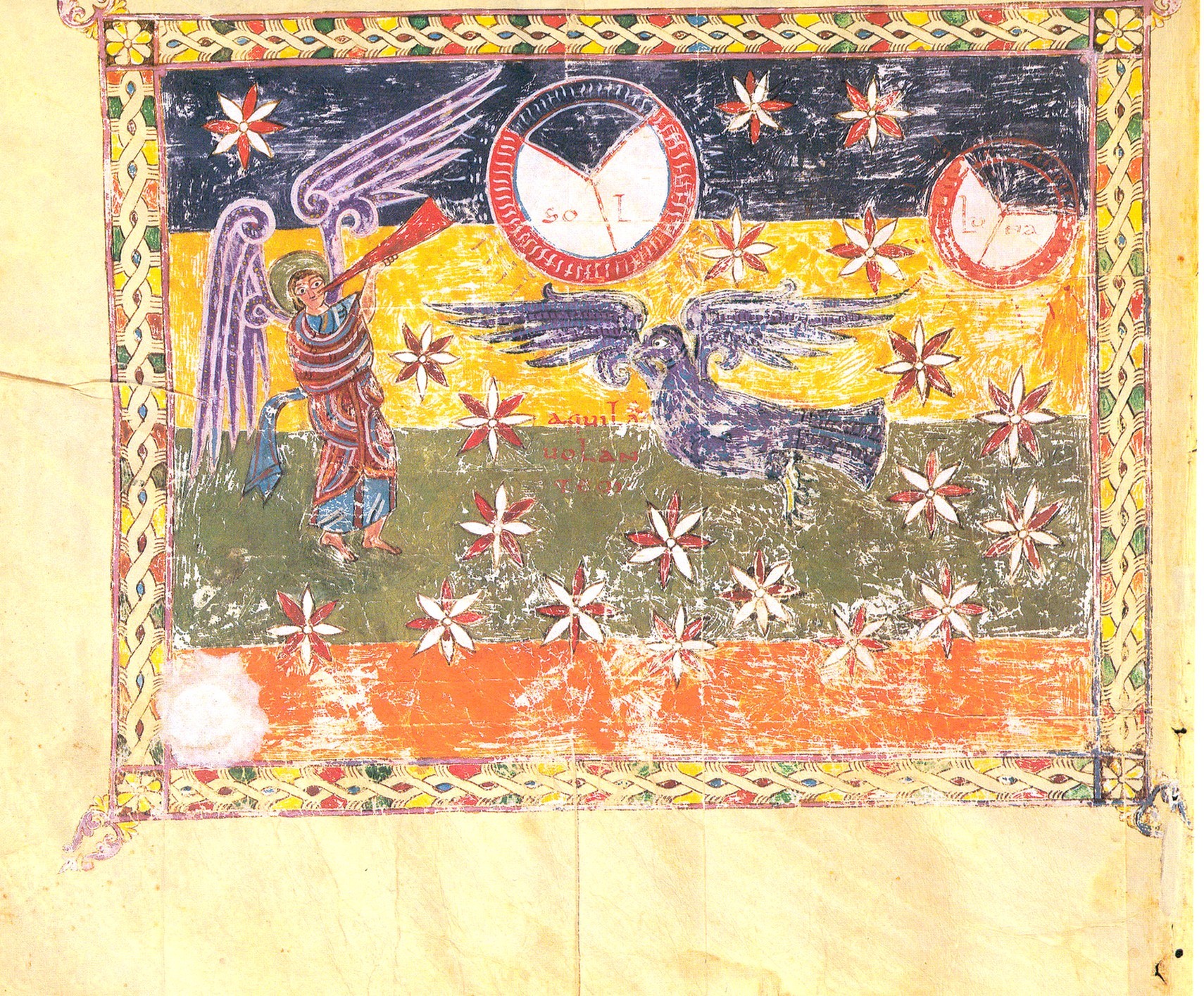