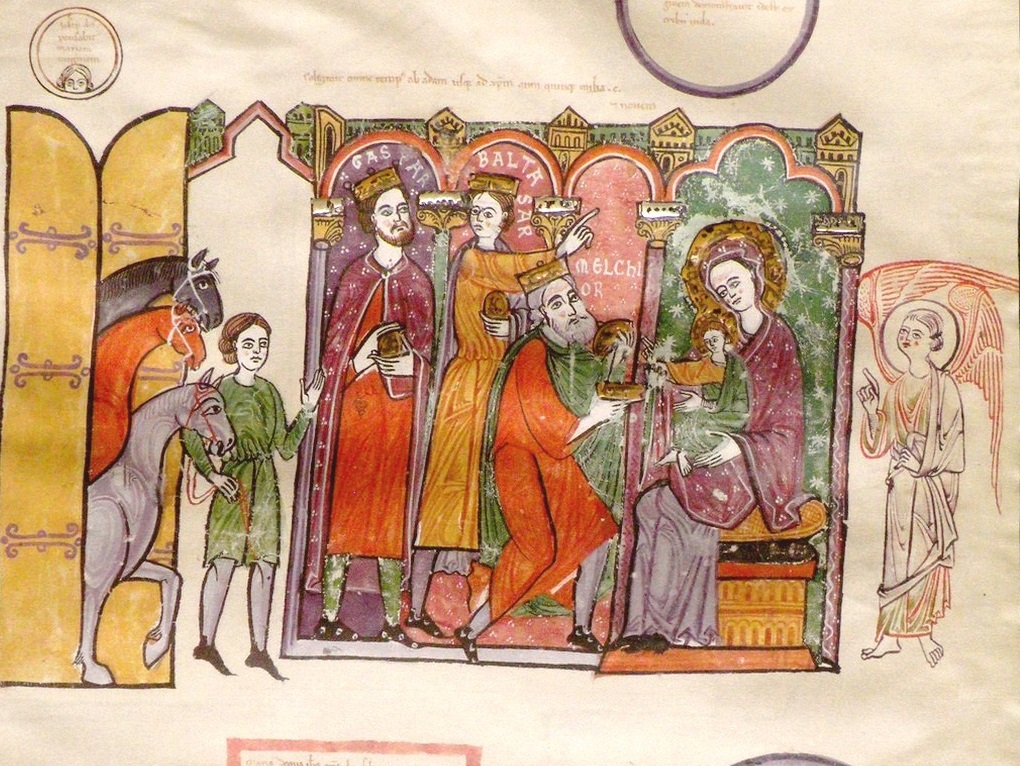 According to its colophon, this manuscript was completed in September 1220 and had been commissioned by a lady, whom the author calls “N”, “always generous with God and with men” who “extended his hand to the Blessed Virgin Mary and the Blessed John the Evangelist”. At first it had been considered that this lady was Queen Berenguela, widow of Alfonso IX of León and daughter of Alfonso VIII and Leonor, who had requested the Blessed for use in Santa María la 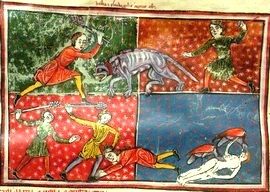 Real de Las Huelgas, a female monastery dedicated to the Virgin that had been founded by her parents in 1187, and where this manuscript still remained in the 18th century. However, after a detailed study of the dedication that exists in its colophon, the current theory is that it would have been commissioned by Sancha García, abbess of Las Huelgas at the time of creation of the manuscript. What there is no doubt, due to the size and quality of the manuscript, lavishly decorated with gold and silver, is that it was made at the request of a high-ranking person.

As for the scriptorium of origin, it does not seem likely that it was Las Huelgas, from which no other works are known. It is supposed that it could have been a monastery in the area of Burgos, possibly San Pedro de Cardeña, although it seems certain that at least two Toledan artists participated in its lighting.

The current binding is not the original, having been replaced possibly in the fourteenth century, at which time some double folios were also reinforced. The book must have been used a lot because, although its state of preservation is good, the parchment is worn on the edges and in many points the letters have been repainted.

There is no news of the manuscript between the year 1770 in which it was studied by E. Flórez in the Monastery of the Strikes, where it had to remain until the confiscation of Madof in 1869, and 1910 in which it was sold to John Pierpont Morgan. Since then it belongs to the Morgan Pierpont Library in New York.

This is the Blessed with the largest pages that have reached us. It also has an interesting particularity: it is the only one that contains two rosins. In the first one has been copied the one that appears closing the Beato of Tábara, added at the end of it together 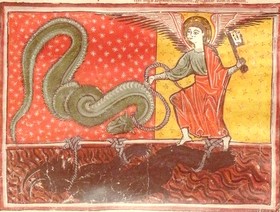 to the image of the tower of that monastery, which is also copied in this manuscript. The second is the real climax of the Blessed of the Strikes.

It belongs to the II-b family such as the aforementioned Beato de Tábara, that of Gerona and most of those of the late twelfth and early thirteenth century -Turin, Manchester, San Pedro de Cardeña and San Andrés de Arroyo-. It is considered a direct copy of the disappeared -except the folios of the tower and the colophon- Beato de Tábara, last work of Magius, who died before finishing it and first of Emeterio and Ende, who would later be the authors of the Beato de Gerona, with which he also bears much resemblance. Thanks to this codex, we can imagine what would be the last work of Magius, of which nothing remains but the last two folios, which were created by Emeterio.

The most commonly used colors in his miniatures are red, orange, yellow and green, although also appear pink, blue, purple, brown and lavender. It is important to note a wide use of gilding in the crowns and halos of the heads of the characters and silver in some imposts and other elements, as can be seen in our gallery of plates obtained from the facsimile of this manuscript, although over time in the original silver has become black.

It is developed by at least three different artists, the two of highest quality related to Toledo, considered as the largest artistic center of its time. One of them, author of the miniatures of the introductory pages -folios 1v to 13v-, shows us a monumental figurative style, with a certain influence of 12th century Byzantine art. He is considered the author of a copy made in Toledo around 1220 of the “De virginitate Beateae Sancta Mariae”, the work of 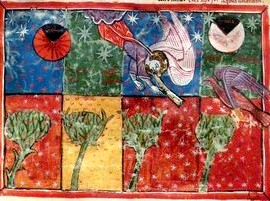 San Ildefonso, 7th century Visigoth. It presents elaborate architectural decorations, with a very careful treatment of the folds of the vestments and bodies in foreshortening.

The second, called Master of Toledo, is the author of seven miniatures from folio 100, folio 146v and eleven others from 147. It is the same master who painted the frescoes that are conserved of the Christ of the Light of Toledo, dated at the beginning of the thirteenth century. He is also credited with images of another copy of the “De virginitate Beateae Sancta Mariae” from Toledo. His style is of the highest quality, which stands out in groups of figures in varied postures, expressive and personalized faces and a great sense of mobility.

The rest of the miniatures have been made by one or several teachers of lesser skill, in the style of the first master of Toledo, who could collaborate in some of them, but less consistent. In many of these images it seems that you have worked with more haste and less attention, in a 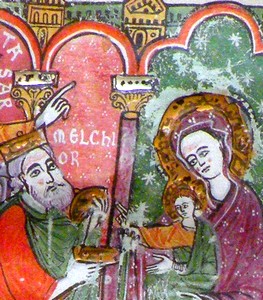 simplified system based on three-tone compositions, with a very poor modeling, as if it had been sketched only.

It is difficult to reach a conclusion regarding the genesis and origin of this manuscript. The scriptorium of San Pedro de Cardeña, very important at that time and from which the Bible of Burgos, another large format manuscript, is also supposed to have come, is considered to be the most probable. In principle it is undeniable that the Blessed of Tábara was counted as a model, but the existence of the copies of his last two pages -the only ones that remain of the authentic Blessed of Magius that appear currently added to a Blessed of another origin- does not let us know if they departed from the one who has come to us or from the entire original of Tábara. Even the fact that the copies of these two pages appear leads one to think about the possibility that they were separated from the rest disappeared during the making of this copy.

On the other hand, the participation of two Toledan teachers, along with another or others who are supposed to be from the Burgos environment, leads to the possibility that, if the original was in Las Huelgas, two quality artists would be called to direct the work and teach other monks who would do much of the work, which would explain that certain architectures appear in his miniatures, such as “The Heavenly Jerusalem” or “The Last Command to John” among others, look inspired by the cloister of Las Huelgas, built in the 1180s as a royal pantheon.

In conclusion, the Beato de Las Huelgas is the last complete copy of the Commentaries to the Apocalypse of Beato de Liébana, as well as the largest and one of the most sumptuous, in which the traditional structure of the Blesseds created over three hundred years, according to the characteristics of the II-b family begun by Magius in the Monastery of Tábara in the mid-tenth century, is maintained, although the style, which has been adjusted to the characteristics of each phase, in this case is already an advanced Romanesque, which announces the arrival of Gothic art. 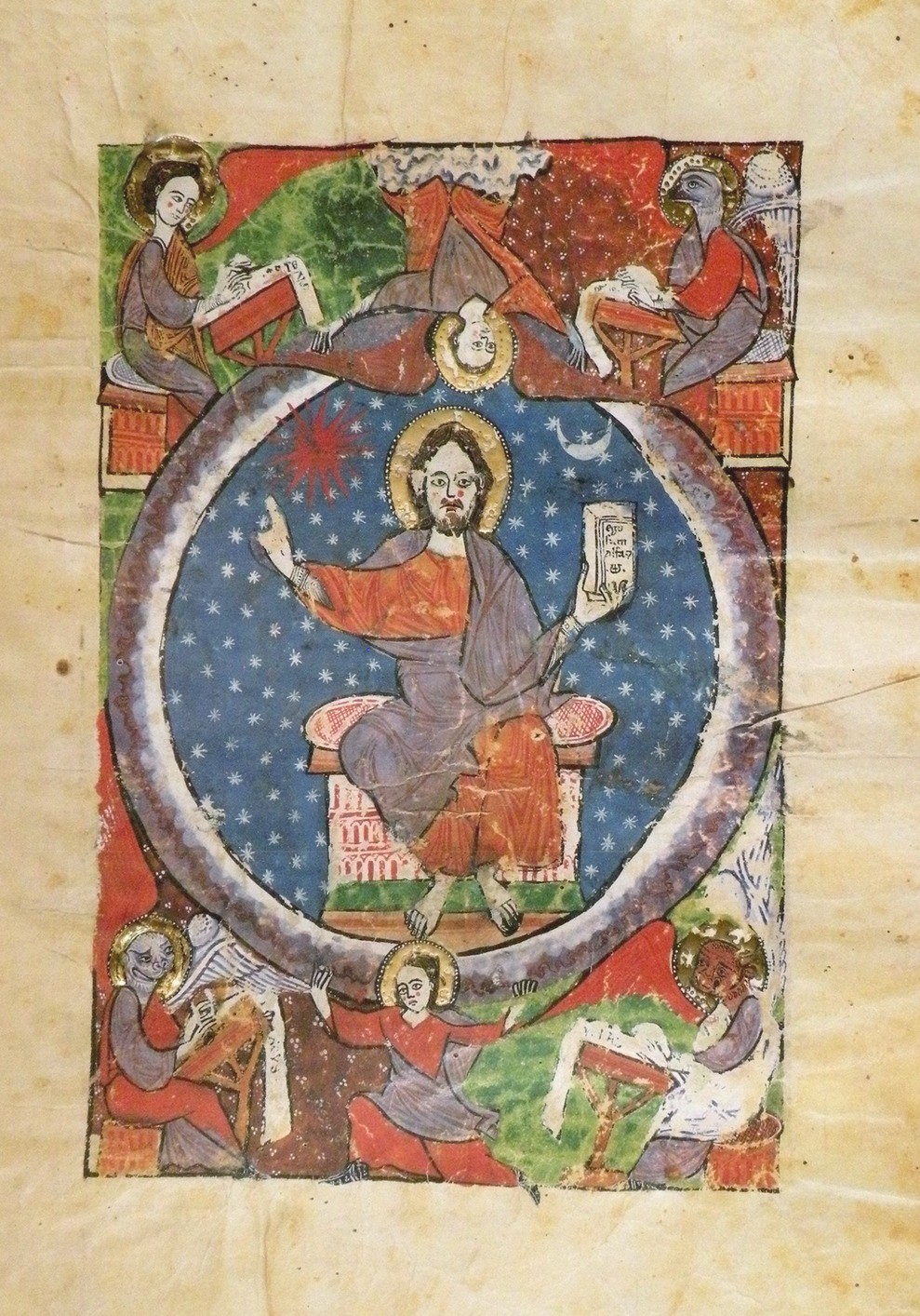 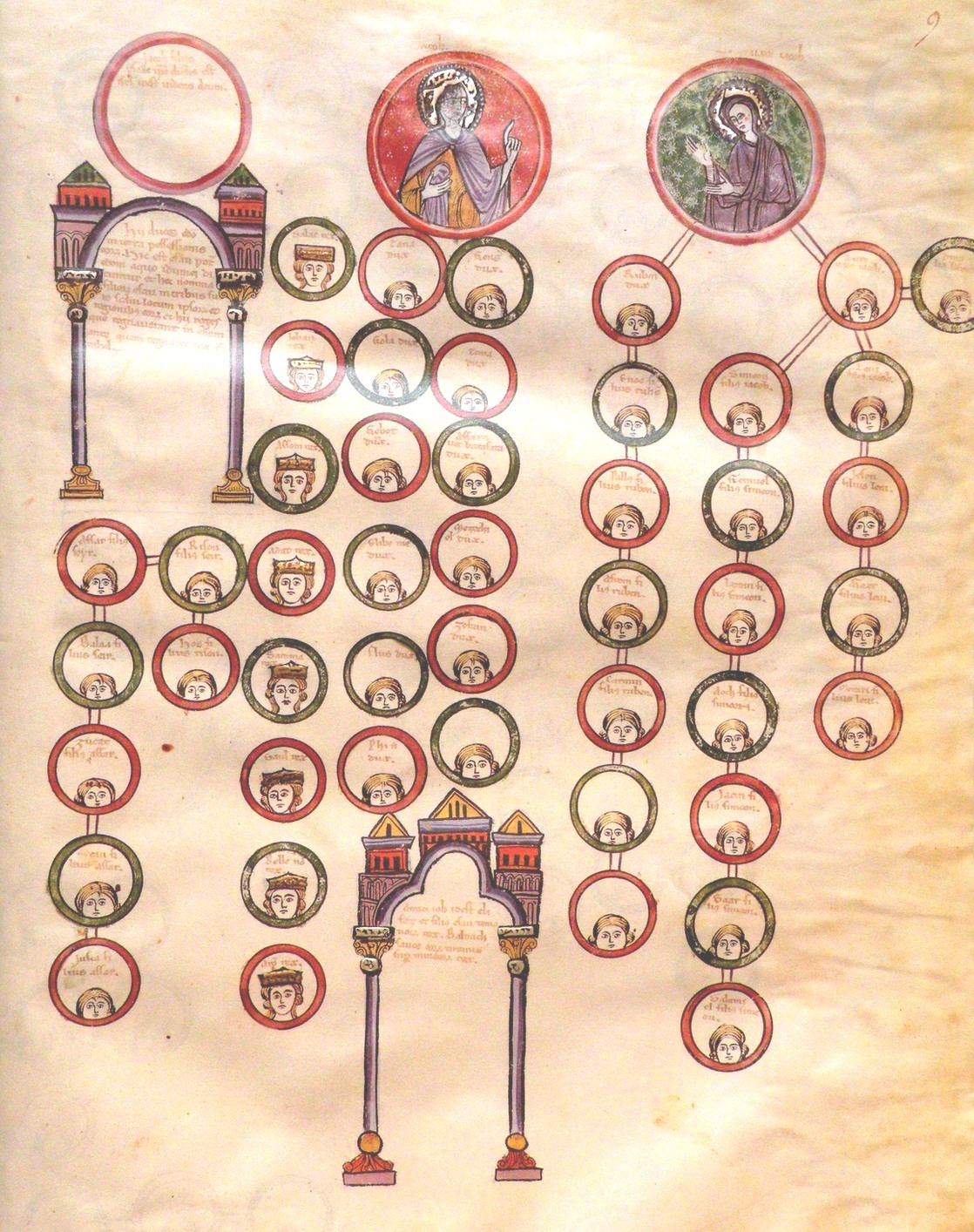 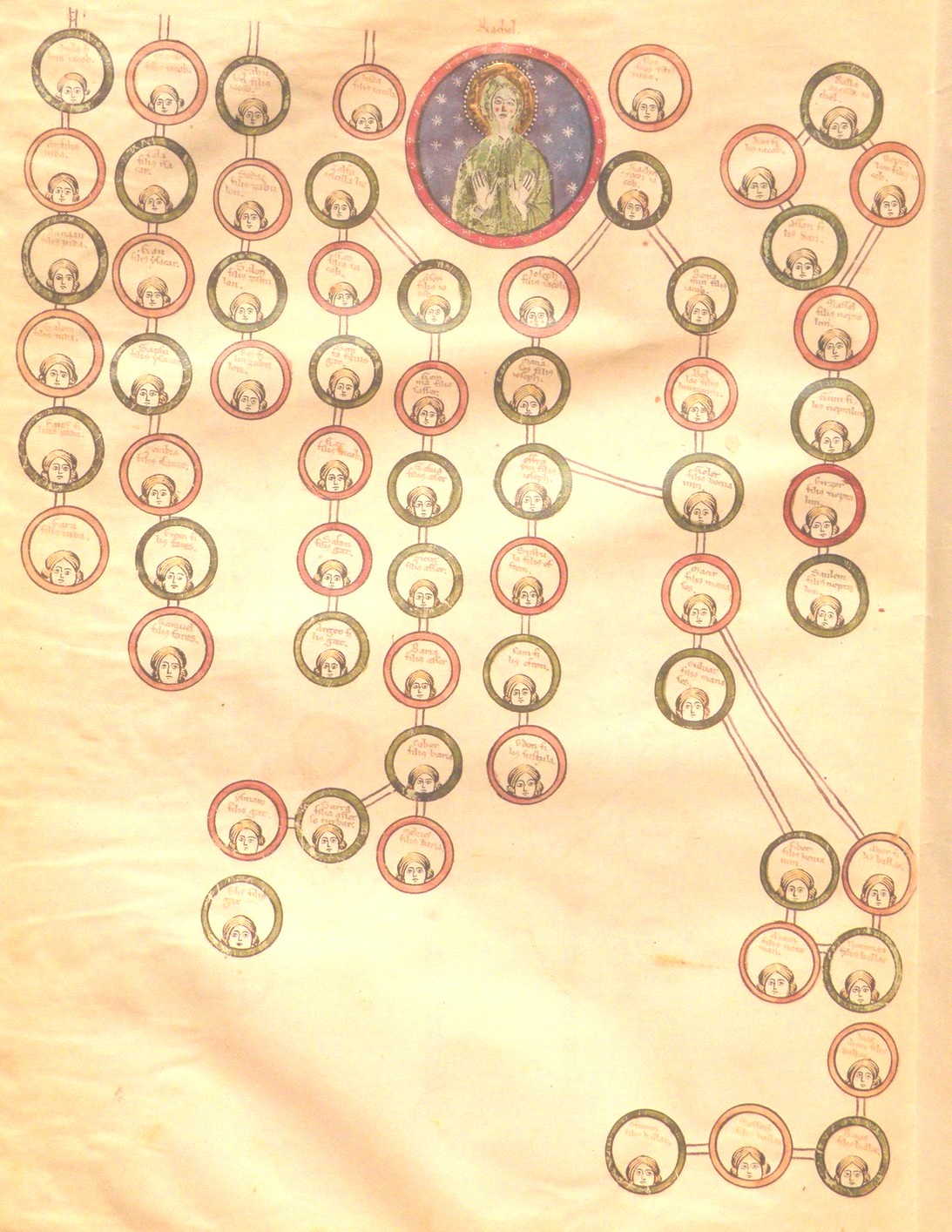 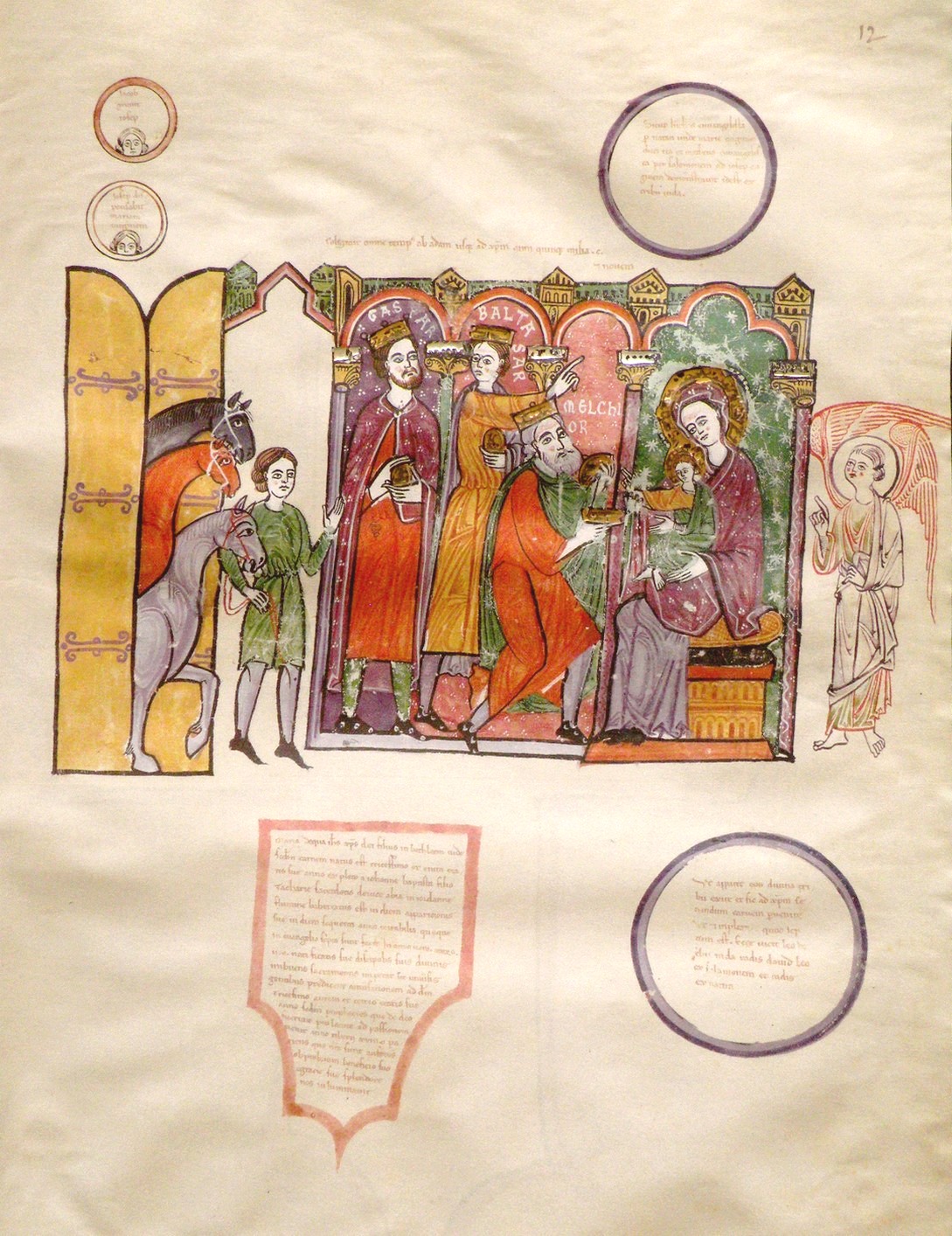 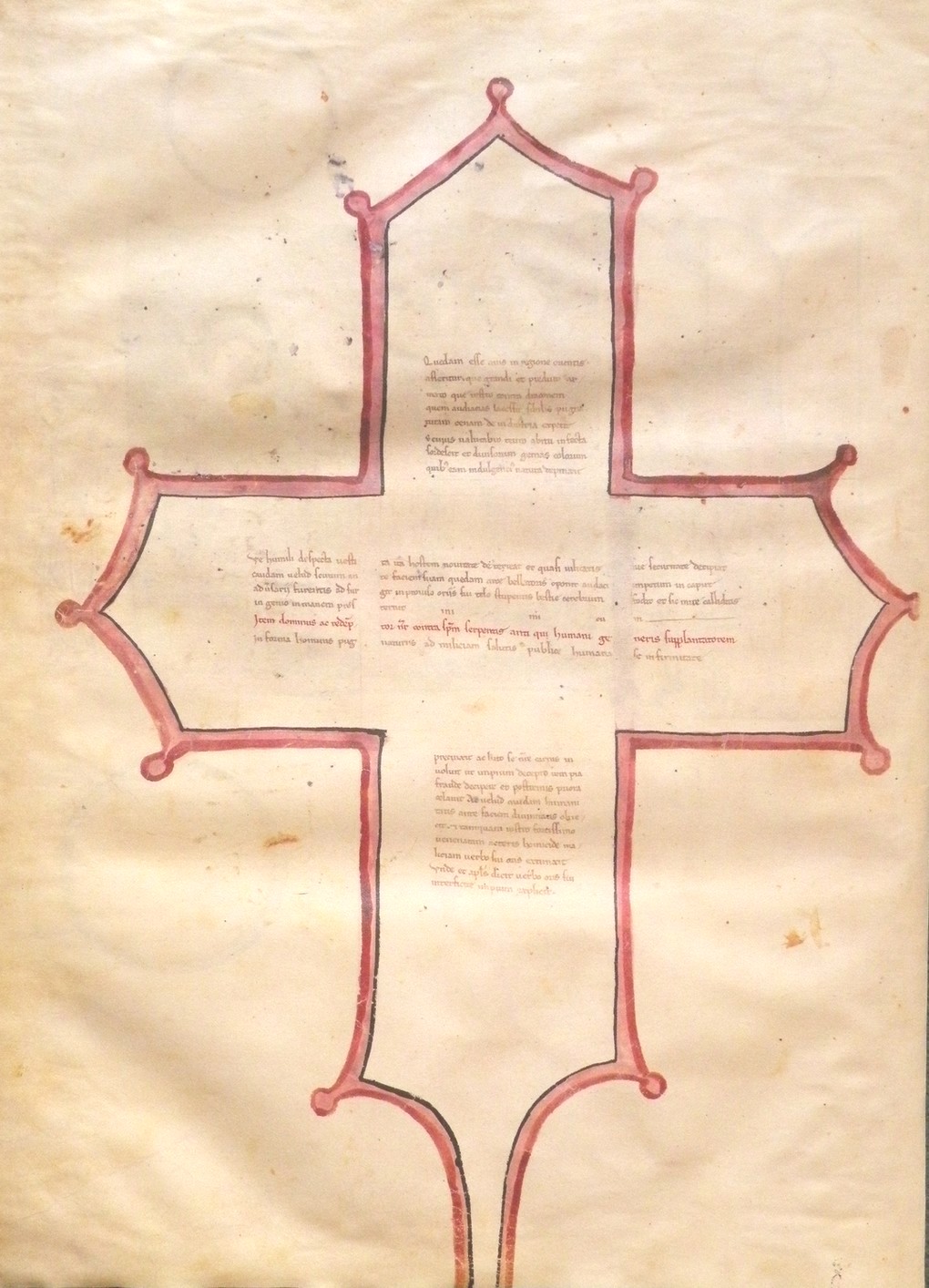 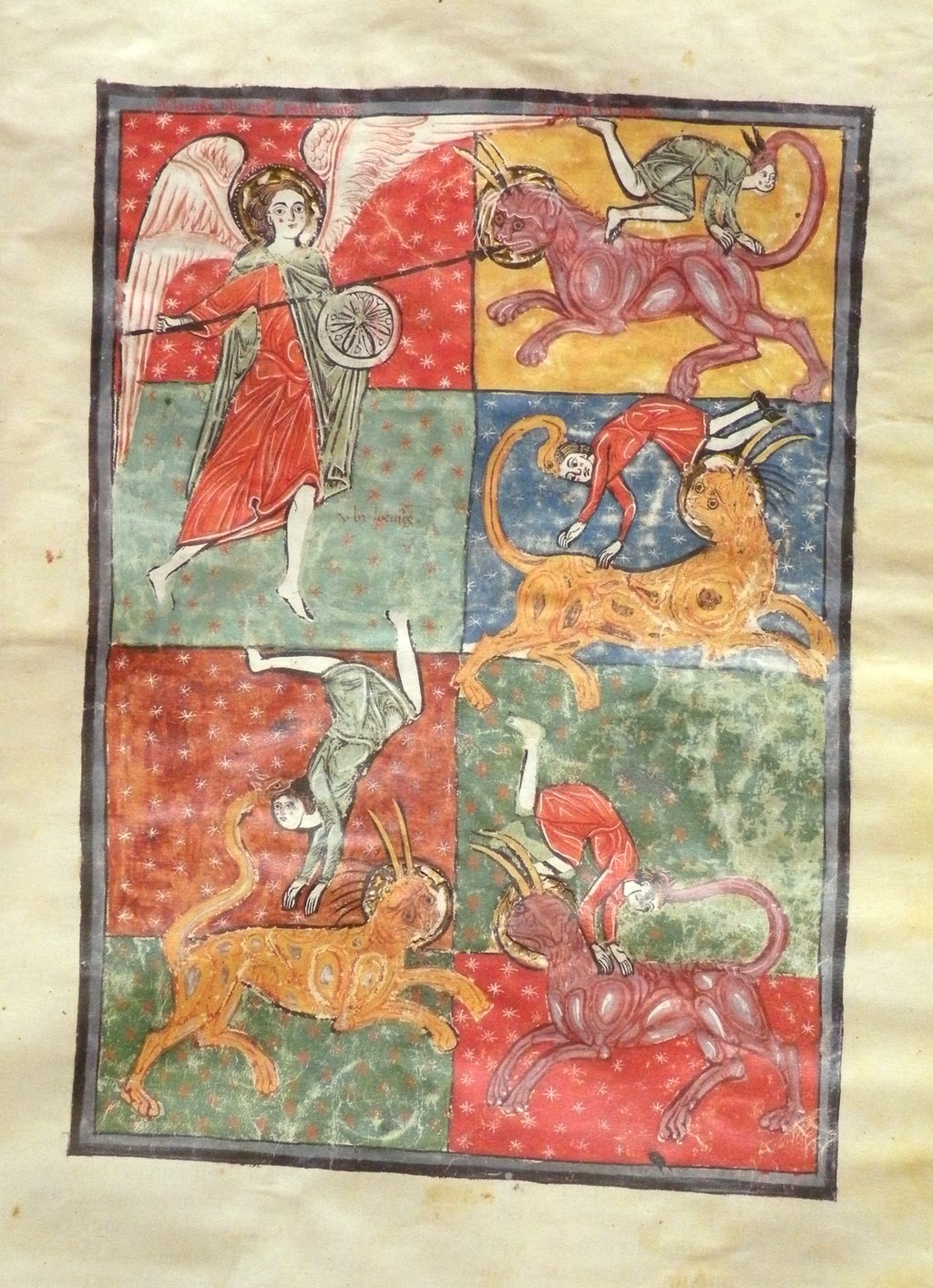 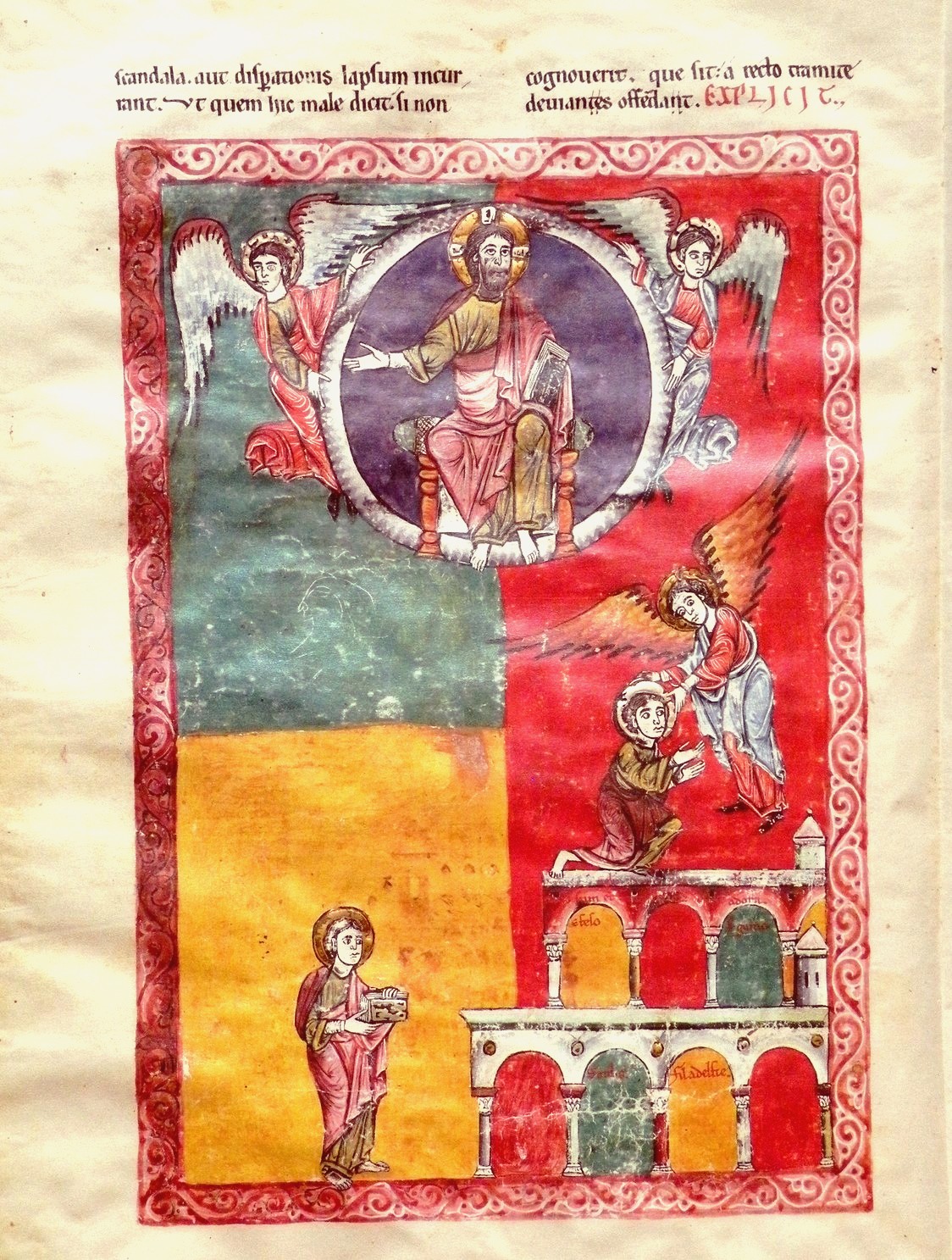 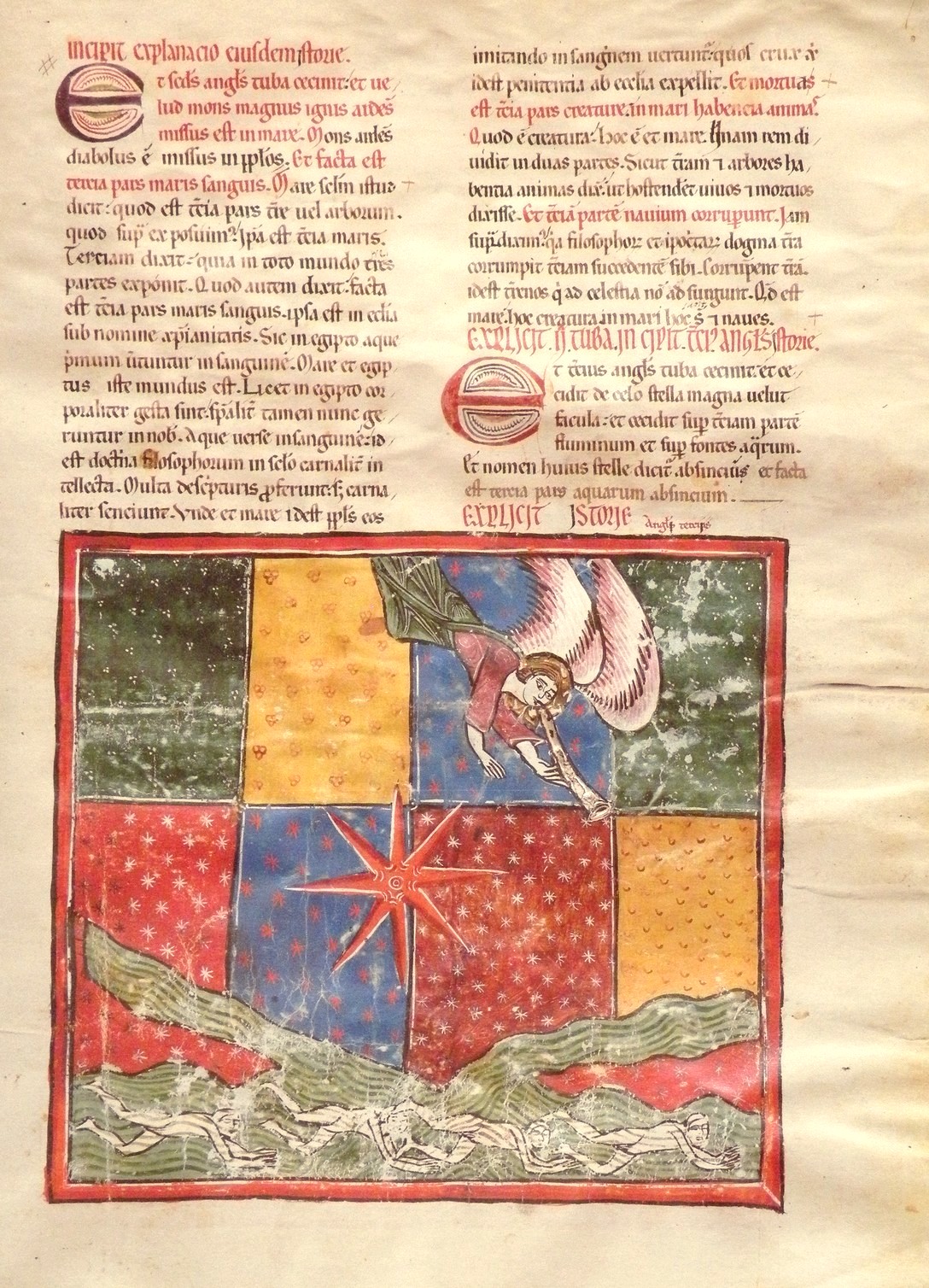 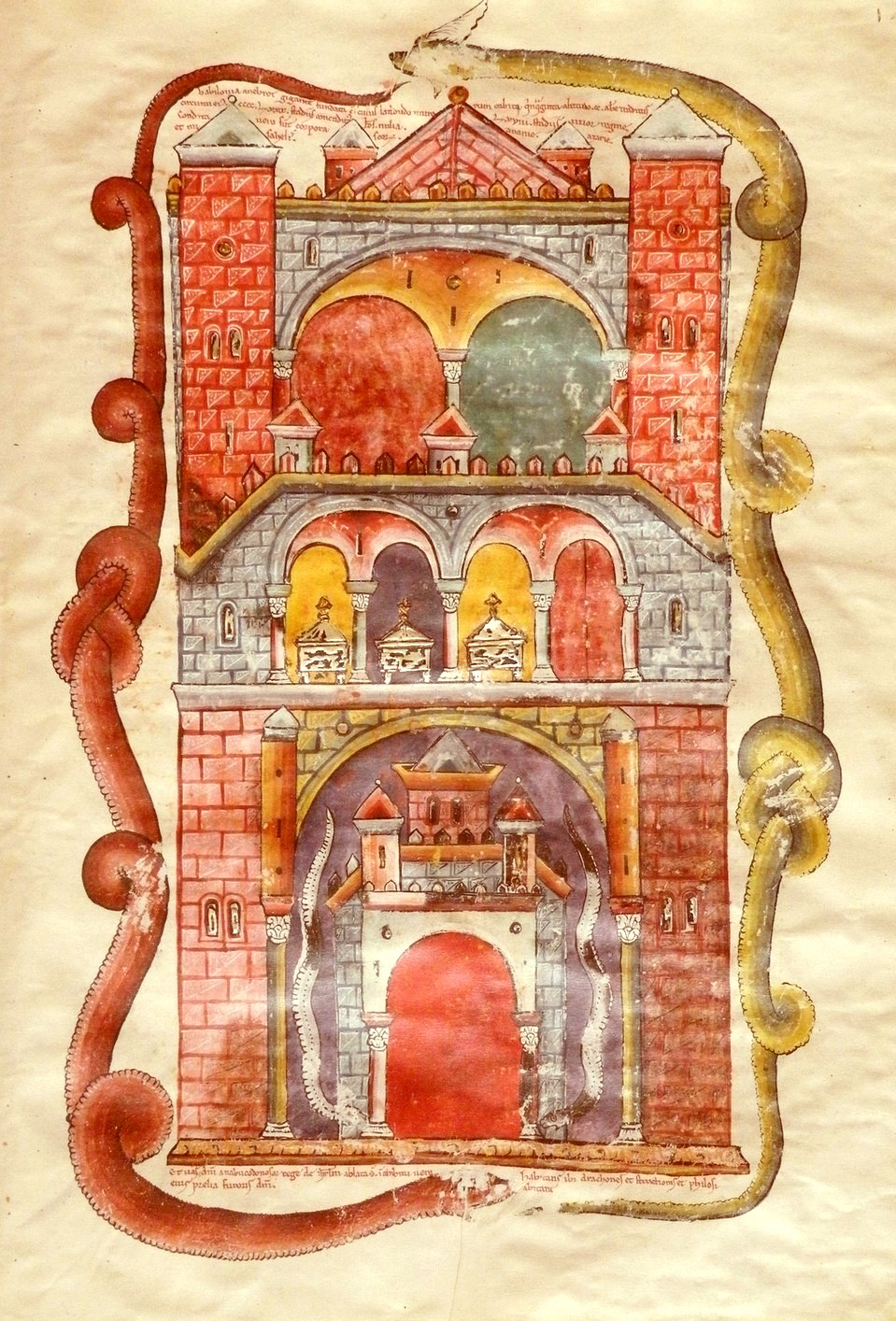 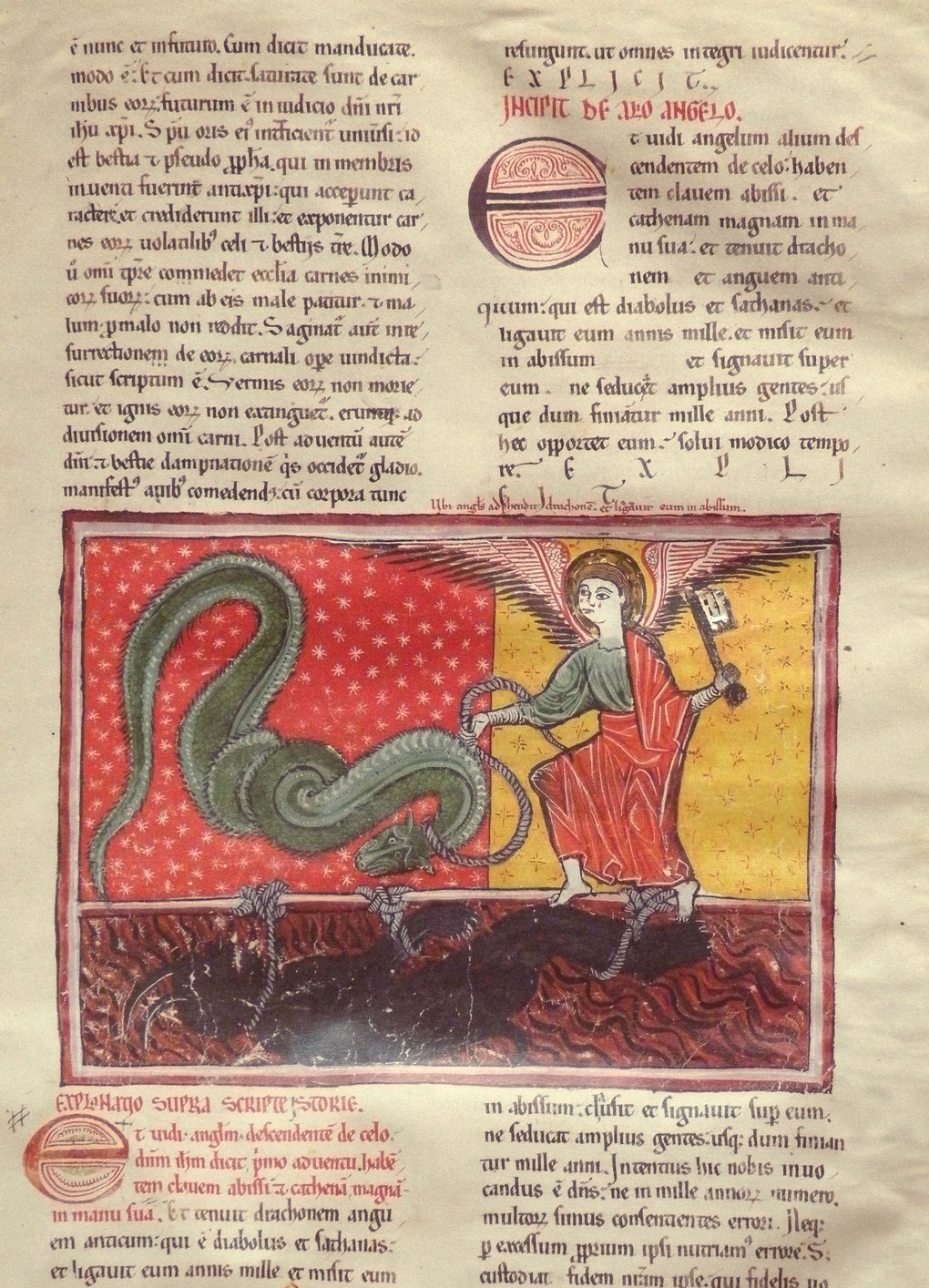