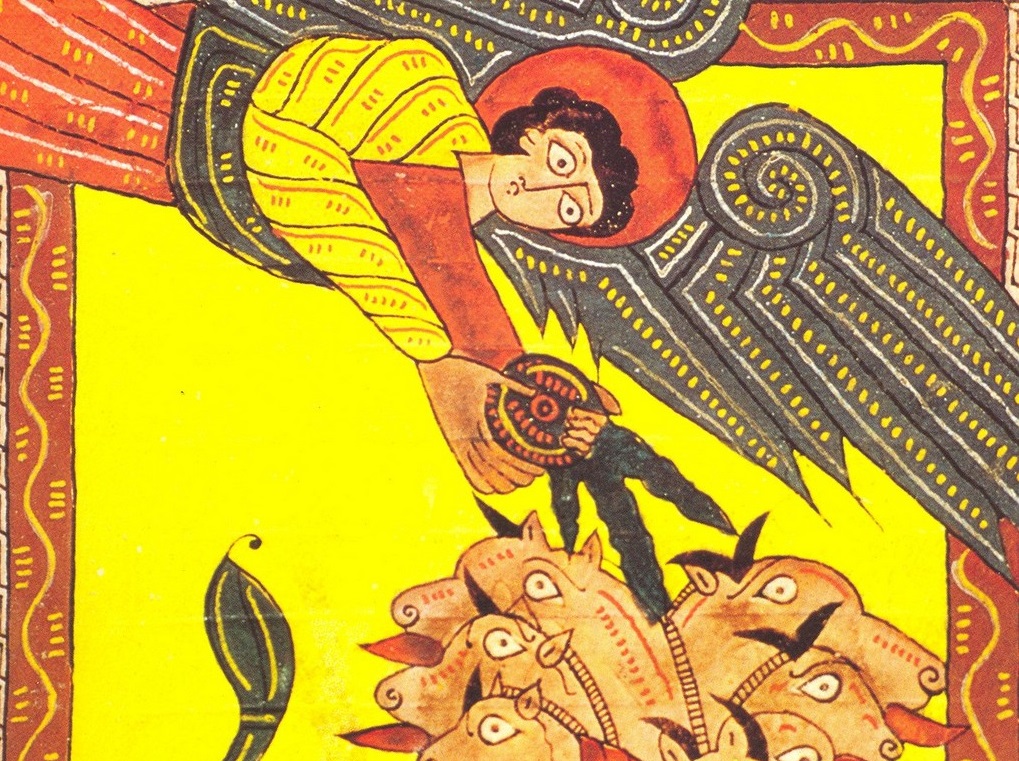 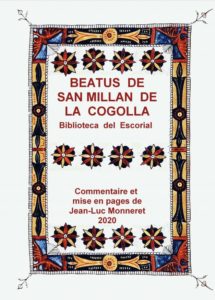 * Reference: Library of the Monastery of El Escorial, Cod & II.5.

Study of the Beato de El Escorial by our collaborator Jean-Luc Monneret in which all the images of the manuscript have been digitally cleaned. Press the image to access.

For most experts, like Menéndez Pidal, Klein or Díaz y Díaz, it is a manuscript attributed to the scriptorium of St. Millán de la Cogolla, written between 950 and 955, due to the great similarity in style with other codex written in its scriptorium in the second half of the 10th century, like the Codice Emilianense from 992. Today it is one of the most relevant pieces of work preserved in the Library of the Royal Monastery of El Escorial, although it is not known whether it got there among the group of codex provided by Ambrosio de Morales in his trip by order of Philip the Second to the kingdoms of León, Galicia and Asturias, or whether it was a part of some of the important collections that have been donated to the Monastery since its creation. 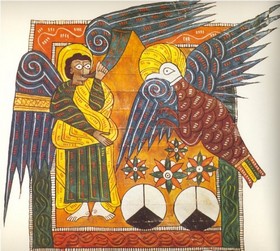 Although initially it was considered by some experts as “a barbarous and rural regression with regard to previous models”, it is in fact the most ancient illustrated manuscript and one of the best preserved from the scriptorium of the monastery of St. Millán that have reached these days. The beauty of its chromatic composition dominates by the yellow, green and brown, the power of its slender figures with plain dressings and very similar faces, as well as for the originality of its compositions within a style completely integrated in the Mozarabic spirit, turn it into an exceptional work.

In general, the figures are framed on coloured backgrounds, although in some cases there are also on white background. In the drawing of the the dressings he commonly uses straight lines, based on flat chracters respresented as silhouettes, without any special interest to represent the volumes. However, he decorates the creases of the dressings with a series of short strokes, white, red or yellow, grouped in several rows that recall those of many figures of St. Isidoro’s Biblia Leonesa, dated in 960.

He represents the characters’ faces in semi profile, all the same, with oval chin, short hair in waves, black, upon which stands out of one of the ears, bilobed. Always almond eyes 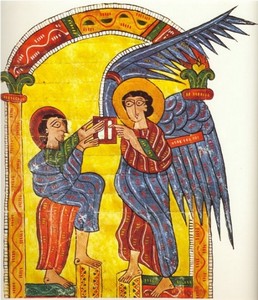 very close to the nose that is formed by a single straight line prolonged upwards to form the straight stroke of one of the eyebrows. The mouth is always formed by a semicircular stroke with a point underneath.

Although the author is unknown there are few doubts regarding its origin since Menéndez Pidal compared the characteristics of the Blessed of El Escorial and the Codex of Roda with the group of manuscripts from St. Millán de la Cogolla dated the second half of the 10th century and the 11th century, reaching the conclusion that there are a series of features in common, that were kept as a differentiating fact by the end of the 11th century and that they do not appear in manuscripts of different origin, for what it is possible to recognize the ones produced in this scriptorium. Among these specific details we may point out:

On the other hand, except in two miniatures in full page, those of Adam and Eve and the vision of the doomsday, the rest are 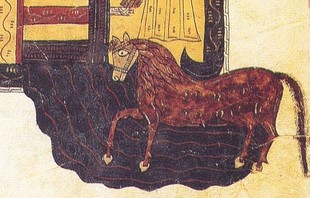 interspersed in the columns of the text, so it has been considered that the text follows the most ancient phase of the first illustrated version of the comment, the same as the Blessed of St. Millán that is preserved in the Academy of History of Madrid, and different to the third blessed of the same origin, although it was not created in this monastery, the Emilianense, that is preserved in the National Library of Madrid that, although older, it is attributed to a more recent phase. This classification is also confirmed by the characteristics of some very meaningful miniatures, mainly the one of the church of Smyrna, the one of the open temple and the one of the Beast that stems out of the abyss.

However, for the content of its text it is considered as the second of the three or four editions that some author like Neuss, Klein or Sanders suppose that the Blessed of Liébana produced before his death. In this case it is allocated to the versions of 784 supposedly; that is to say that our Blessed, if we accept that classification of versions of the miniature and the text, would belong to the group I-b or I-784.

Nevertheless, although as we have mentioned, comparative studies have been achieved of the Blessed of El Escorial with other emilianenses codex, it is still pending the analysis in depth that its quality, its special characteristics and its perfect state of conservation make it mandatory for a proper knowledge of the Spanish high medieval miniature. 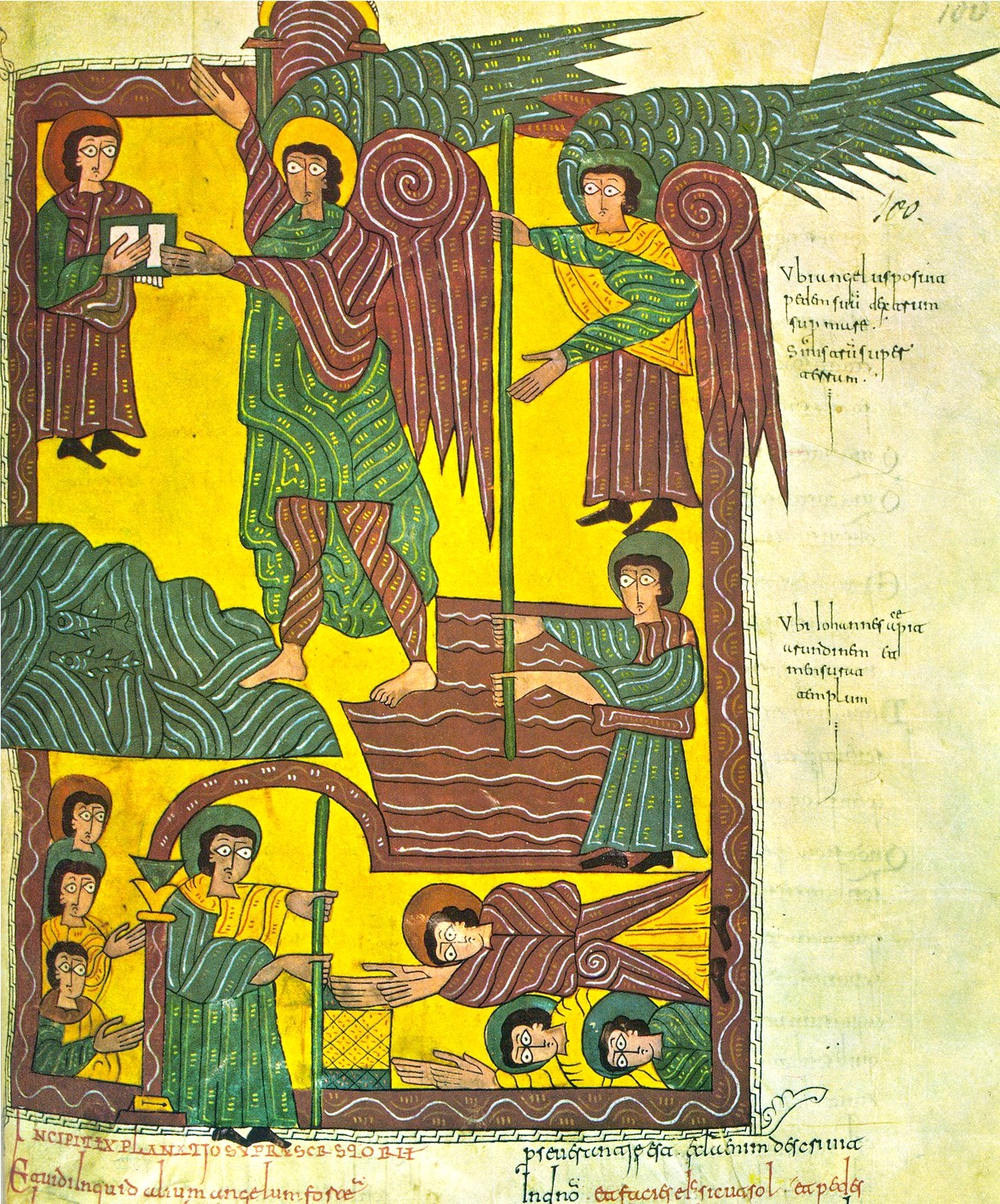 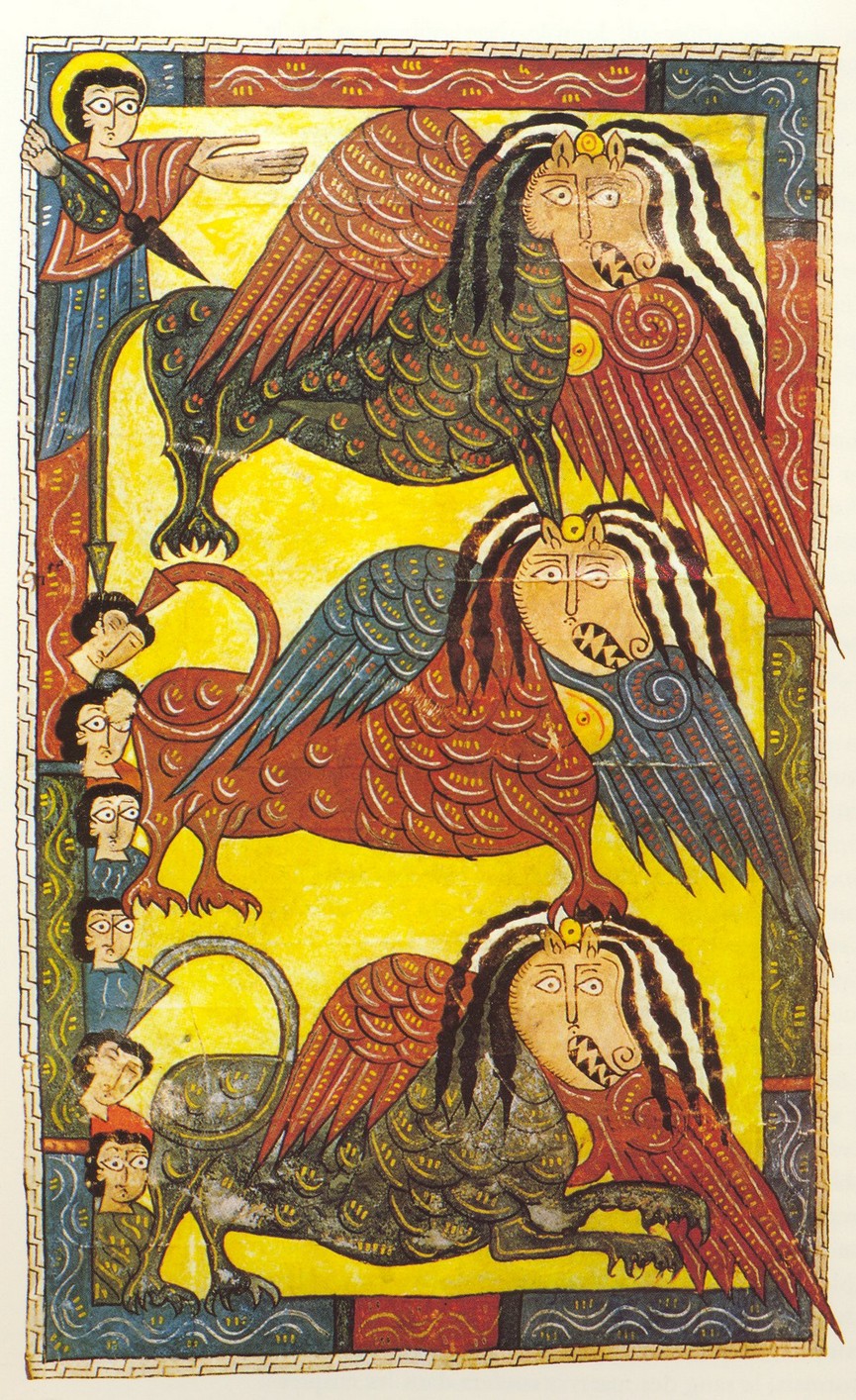 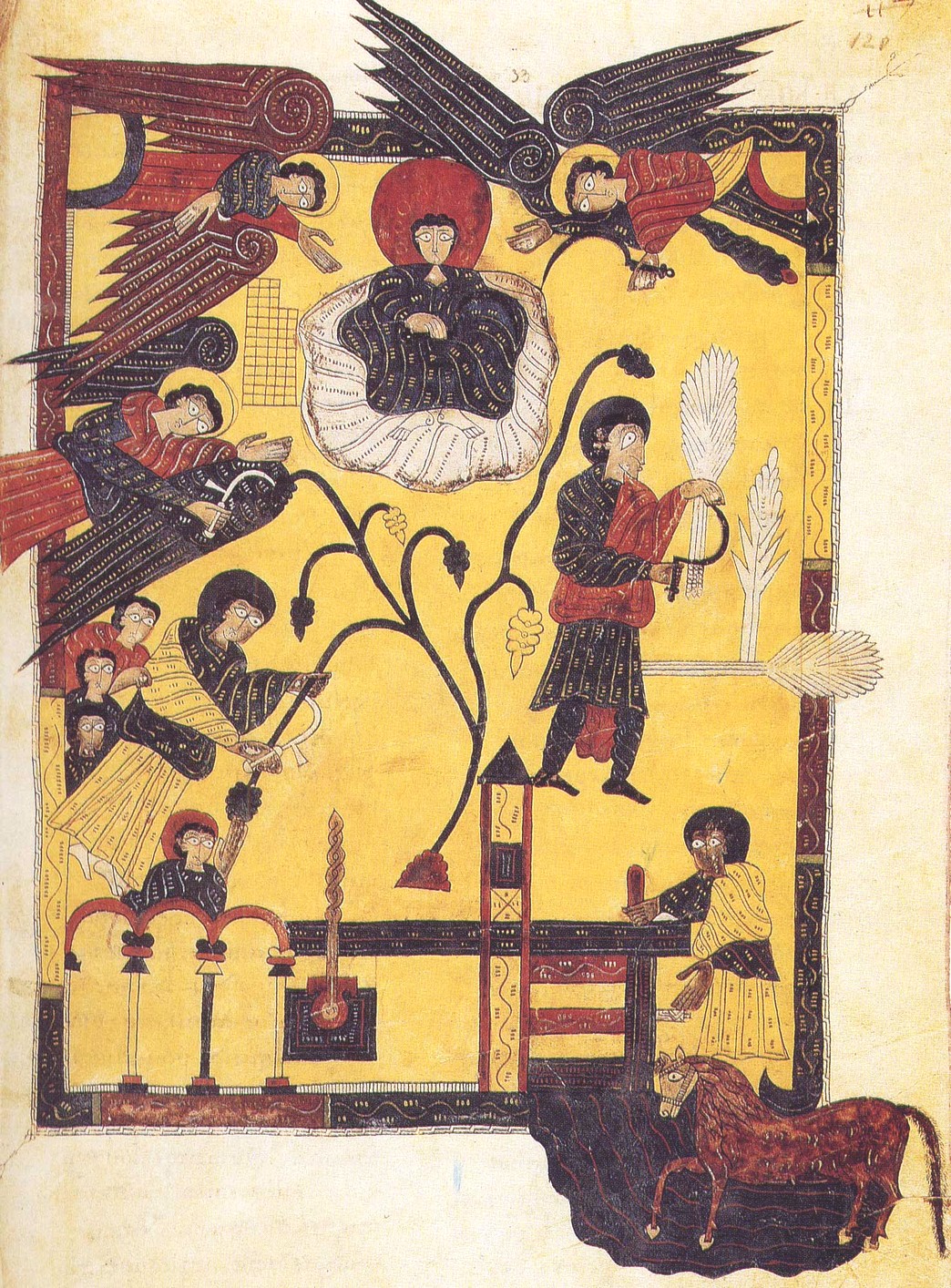 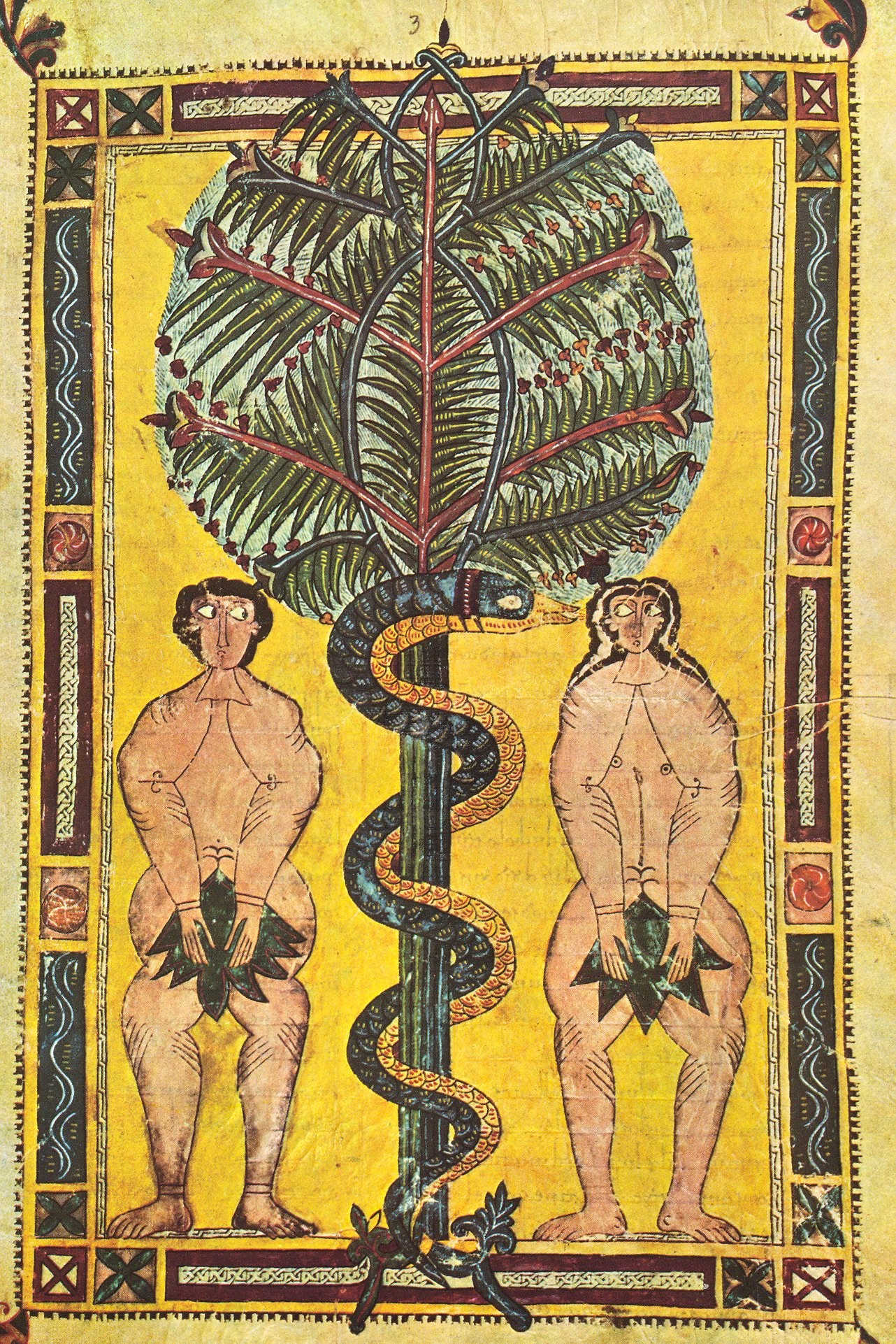 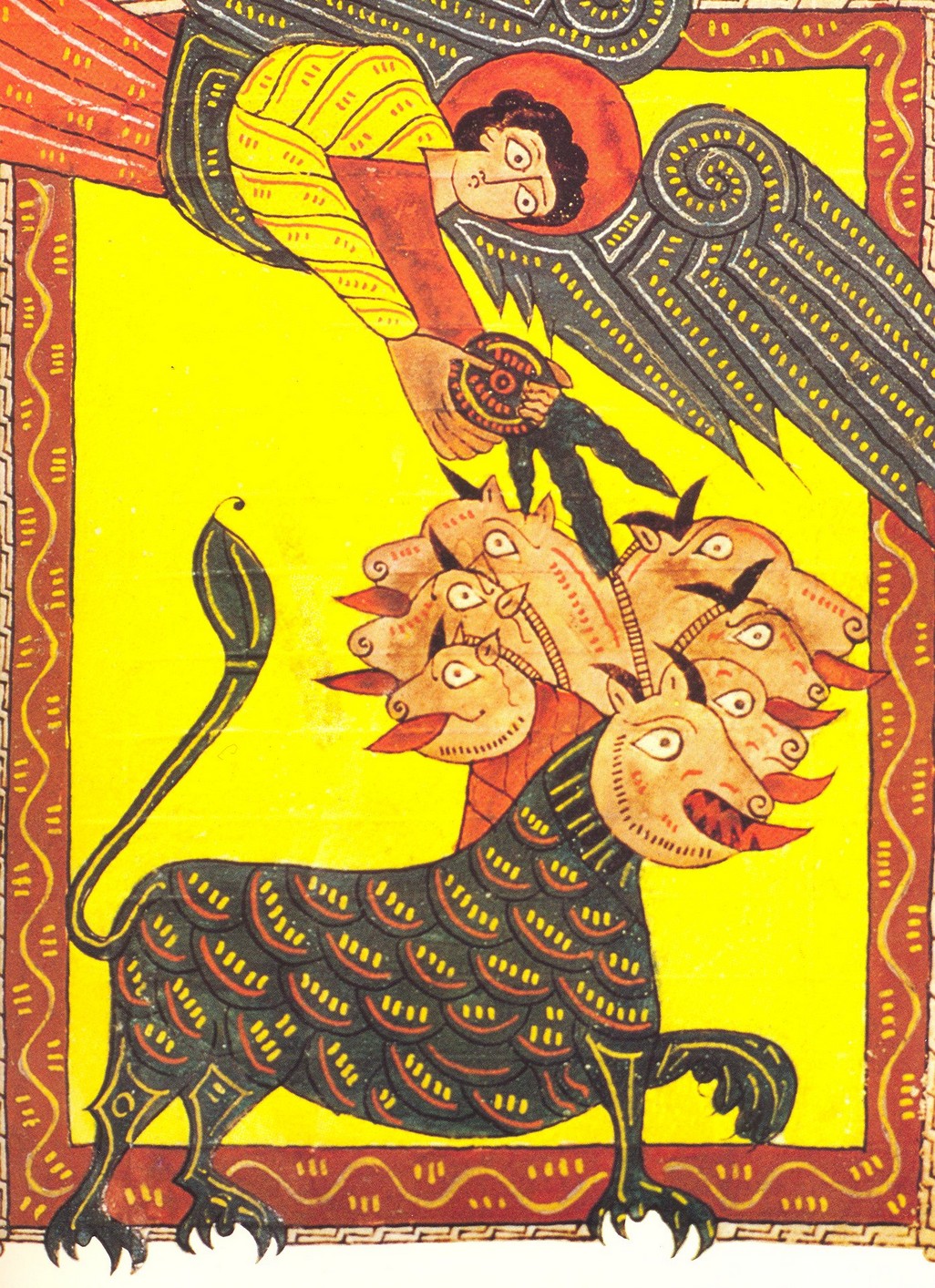 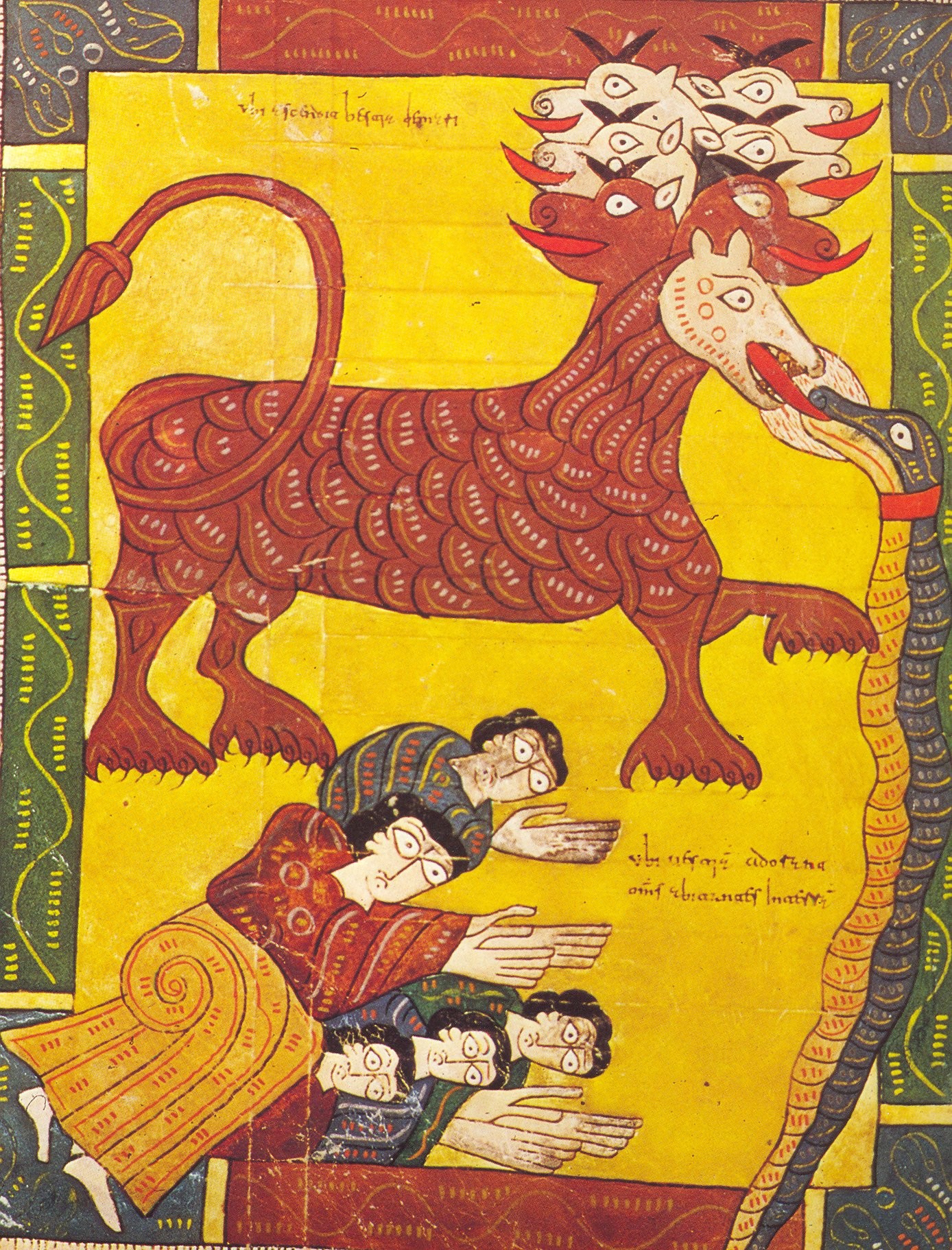 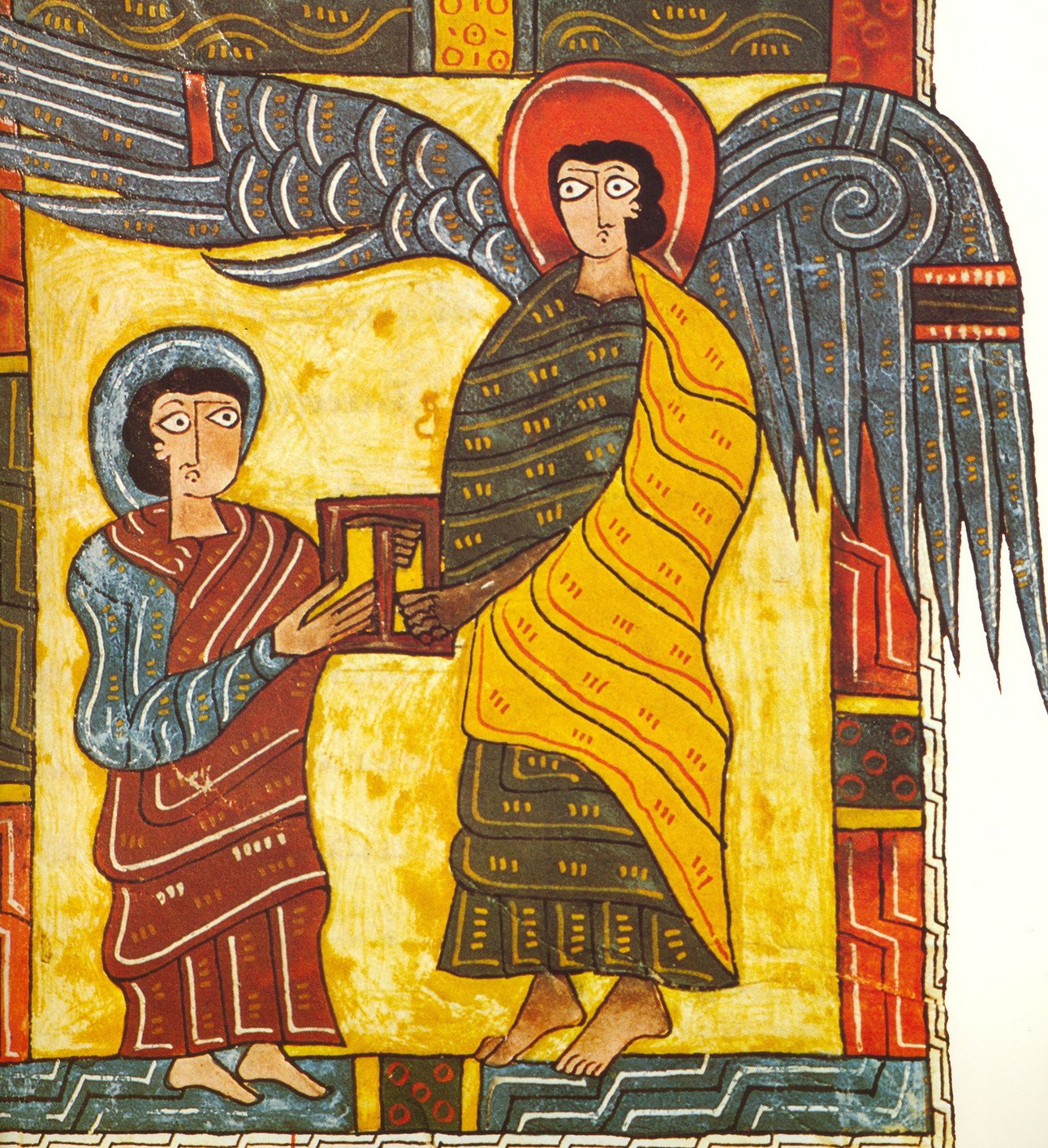 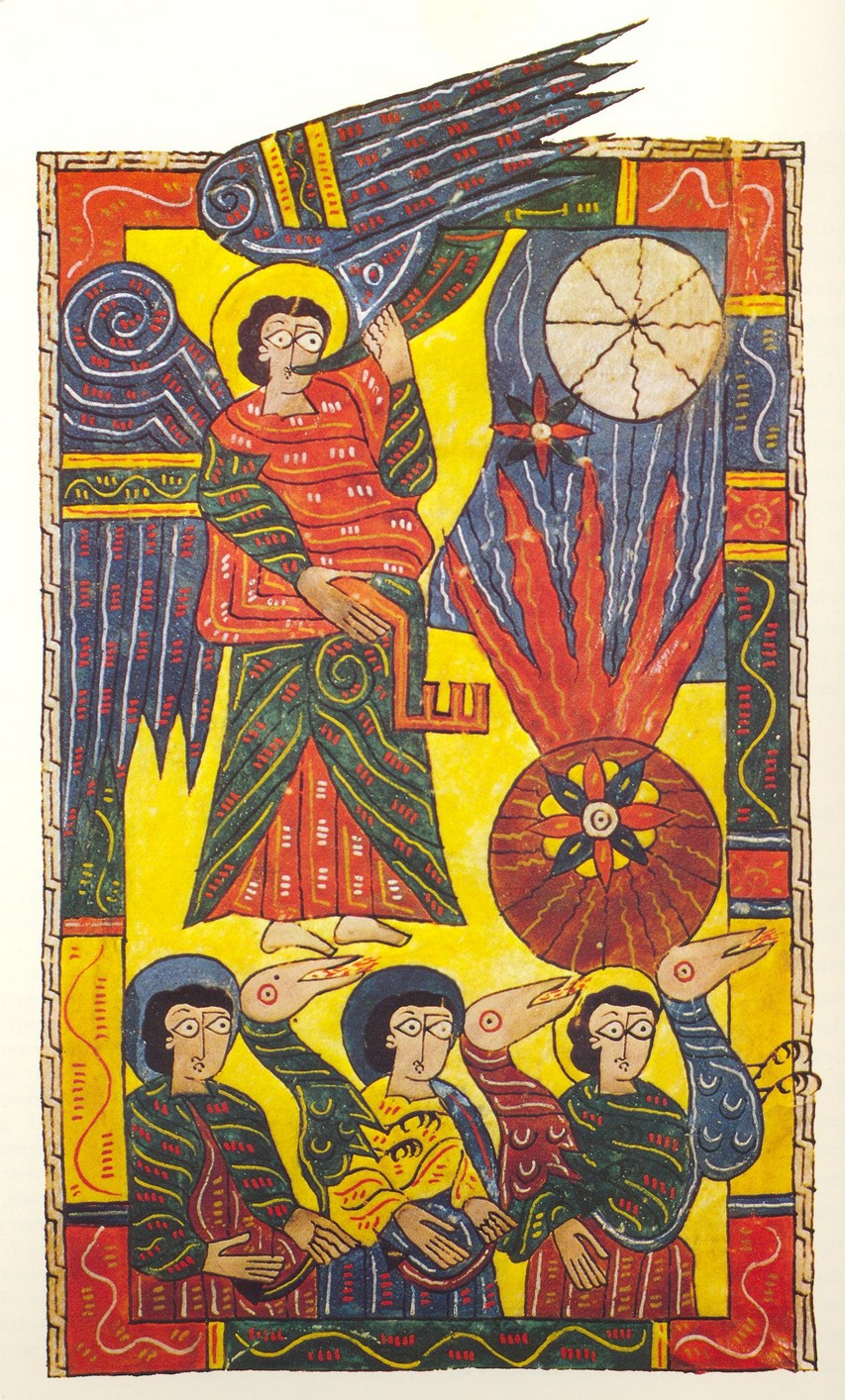 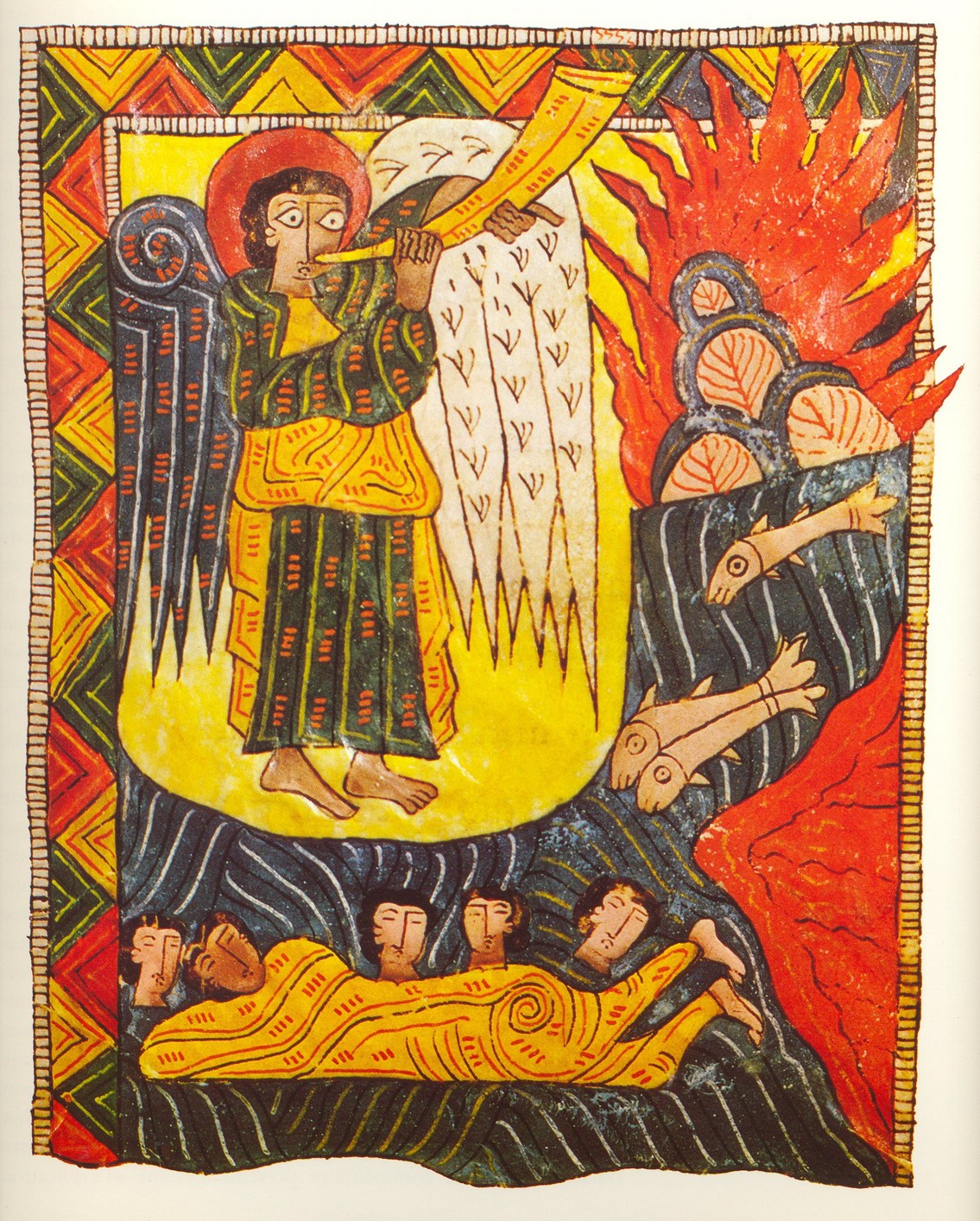 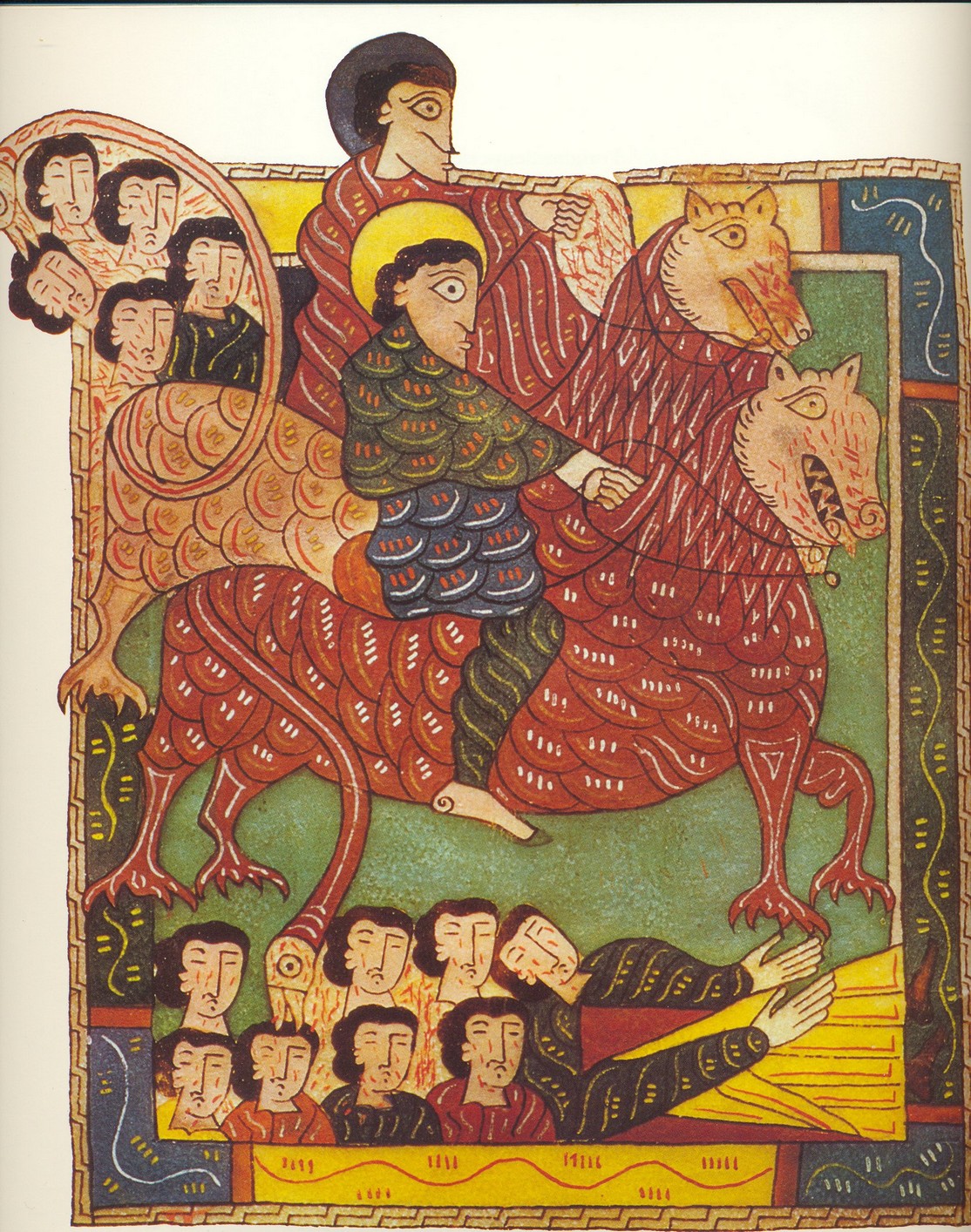