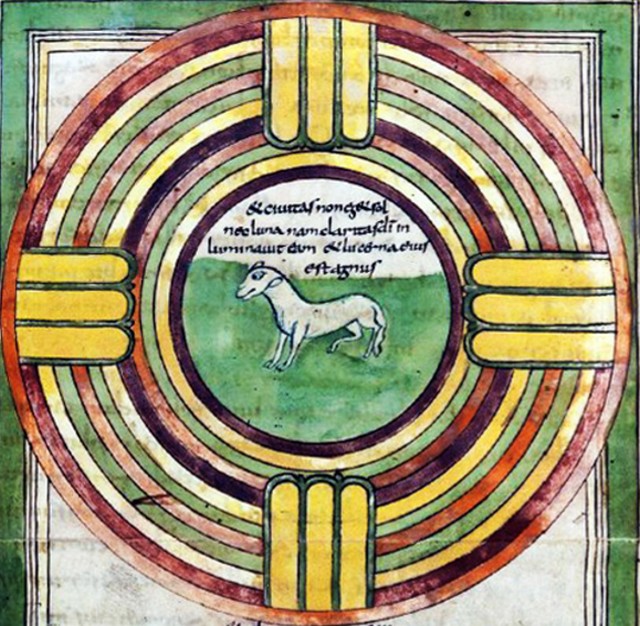 To our French friend Jean-Luc Monneret who has sent us his work on this manuscript. which we recommend, from which we have obtained all the images in our file.

The Apocalypse of Valenciennes is a 9th-century illuminated manuscript from Central Rhine, consisting of 40 folios of 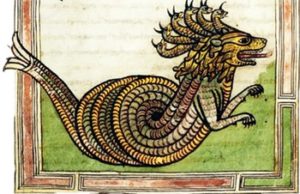 Parchment that includes 39 full-page miniatures attributed to a single artist who is not very expert, some authors believe could be Spanish. The images are colored, with the particularity that they were drawn before copying the Latin text, which would later make a French scribe who signs as Otoltus, who divided it into 64 chapters with different titles for each of them.

The paintings are all framed or intertwined with geometric elements and each includes a legend drawn from a text from the Apocalypse related to the image. The first image, in folio 4, presents Saint John the Evangelist addressing the reader.

Its place of origin is not known, although some authors believe that its images are related to some contemporary manuscripts from Central Rhine and Flanders and that its illustrations derive from a cycle of images that were taken from Rome to the monastery of Wearmouth-Jarrow by Abbot Benito Bischoff on a trip he made in 676. All this allows them to ensure 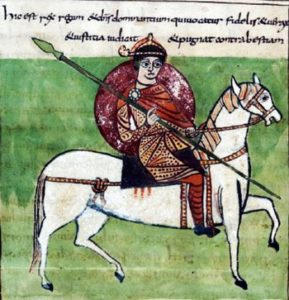 that the Apocalypse of Valenciennes is, without any doubt, the cradle of the miniatures of the Spanish Blesseds, and that this work is the origin of the whole European apocalyptic image, and more specifically that of the Iberian Peninsula.

But this generates some dating problems with the work of Beato de Liébana, a character who lived in Asturias in the eighth century and finished the second version of his “Commentary to the Apocalypse” in 786. The great researchers such as Gómez Moreno, Camón Aznar, Díaz y Díaz, Neuss, Sanders, Willians or P. Klein, have not been able to reach a definitive conclusion regarding the possibility that this first Blessed, now disappeared, already had images, but what we do know is that all his copies, even the oldest folio we know, that of the Blessed of Cirueña dated to the year 900, are illuminated, so when studying his relationship with the Apocalypse of Valenciennes, if certainly the images of both codices have their origin in said cycle, we can consider two possibilities:

In the event that the first Blessed already included those images that would later be the basis for all subsequent blesseds, given the magnificent relations between the courts of Charlemagne with Alfonso II and the respect for Blessed in Europe after his intervention in 784 and 785 in favour of Alcuin’s thesis against Adoptionist theory, It seems very possible that in the eighth century a copy of the images of the monastery of Wearmouth-Jarrow had been received in Oviedo that would have been used to illuminate the first Blessed or that his had sent a miniaturist from Asturias to copy them. This could explain why a miniaturist from Oviedo, once this work was finished, was sent to the Rhineland to illuminate this Apocalypse. In this topic it is important to note that in Oviedo there was a miniature of quality that had allowed to copy in the year 810 a work as important as the Tirreni’s Bible. 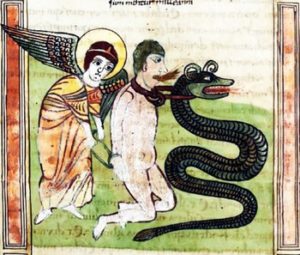 However, if the first Blessed did not have images it seems very unlikely that the French manuscript was illuminated in the Rhineland by a Spanish copyist and that his work served as a basis for creating, as early as the ninth century a – or several – first illuminated version of the Blessed.

But in all this it is forgotten that in the manuscript first the miniatures were drawn and, once finished, the text was added, something very special since the usual thing was to write the text leaving the spaces for the illustrator to include later the images, which allows us to consider even the possibility that images and texts were made in different places.

So why not consider the possibility that the cycle contributed by Bischoff to illuminate his first Blessed had been sent to Asturias and that once it was completed when returning it a copy of the images of the cycle prepared to be completed with the text in Rhineland? It is perhaps a remote possibility, but it could be easy to verify by analyzing the parchment of this Apocalypse and comparing it with the parchments that were then used in Central Rhine and Asturias, for example that of the Bible of Tirreni. 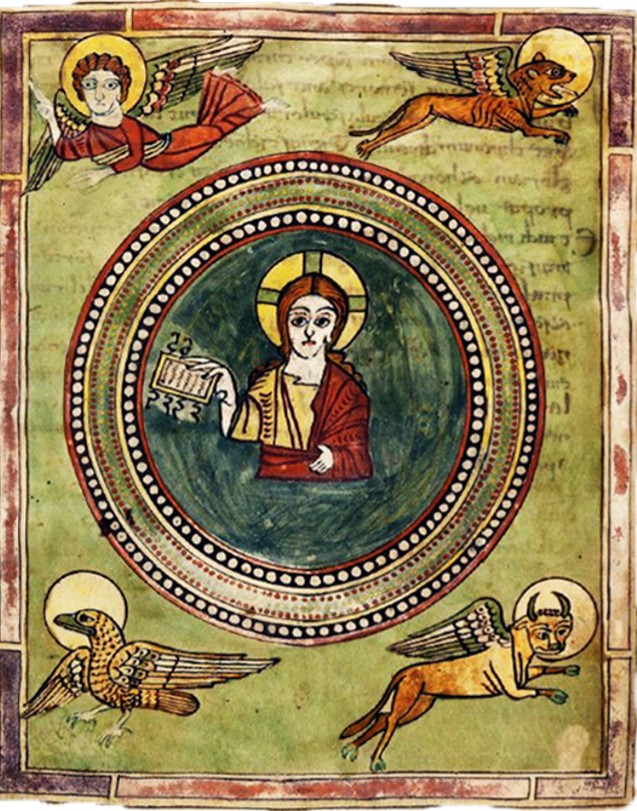 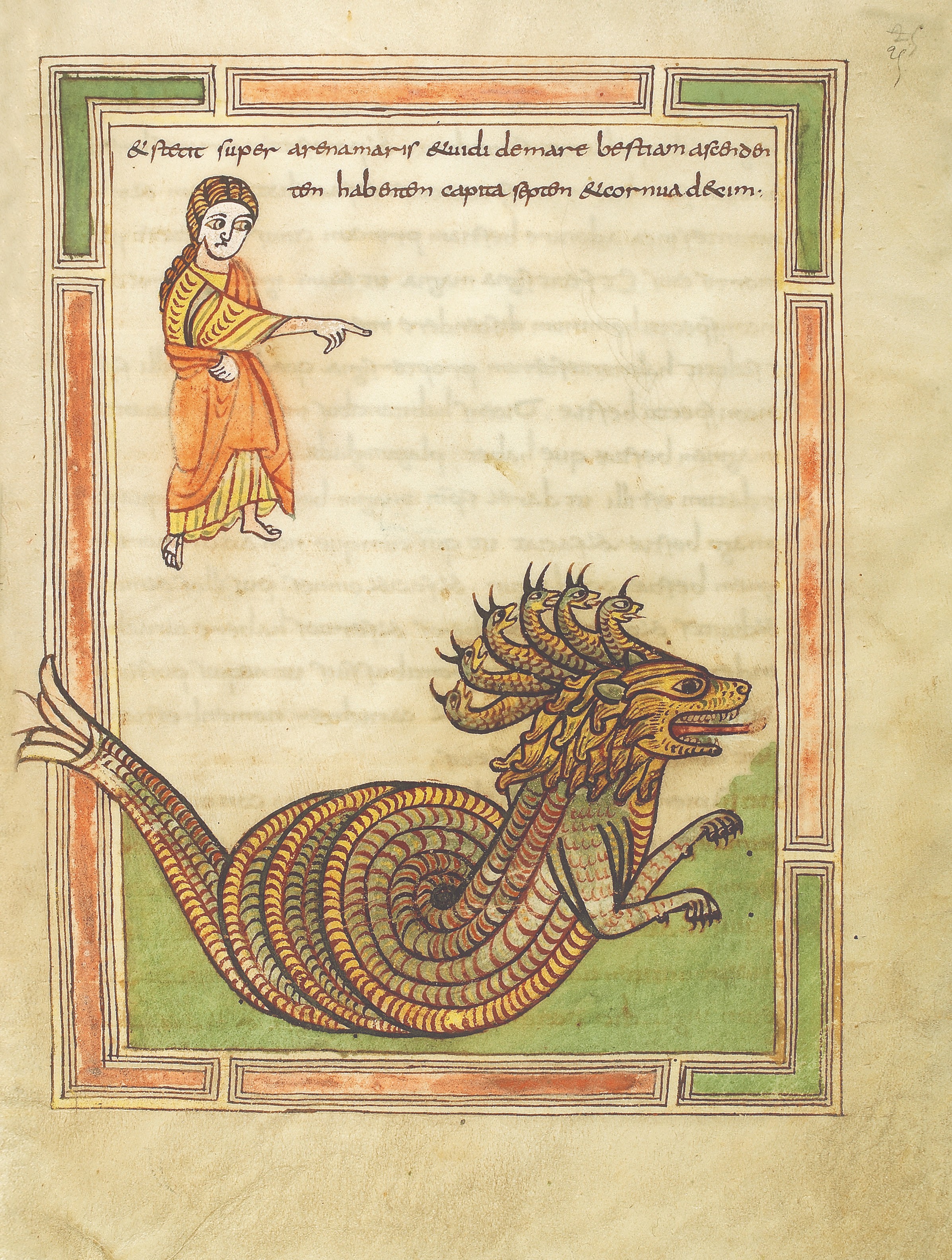 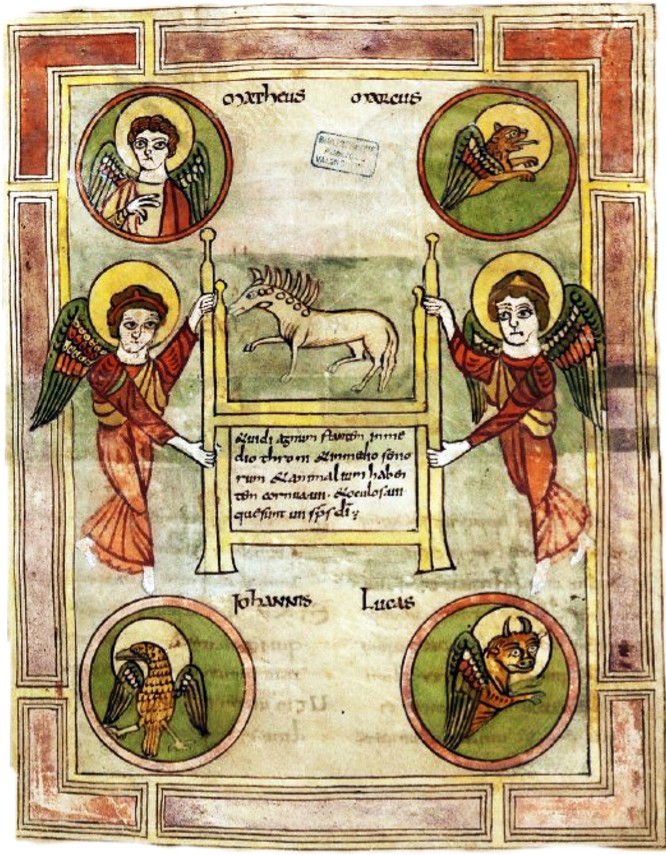 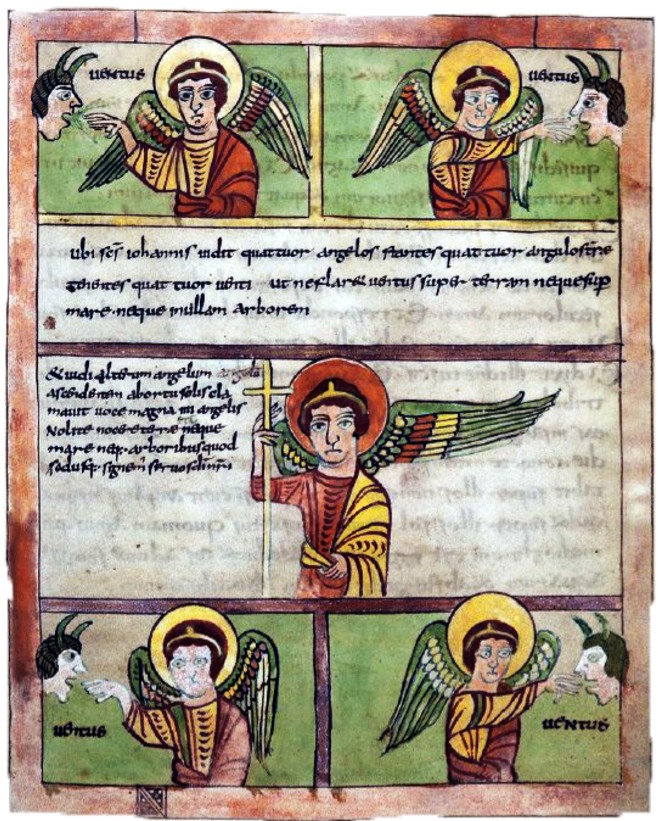 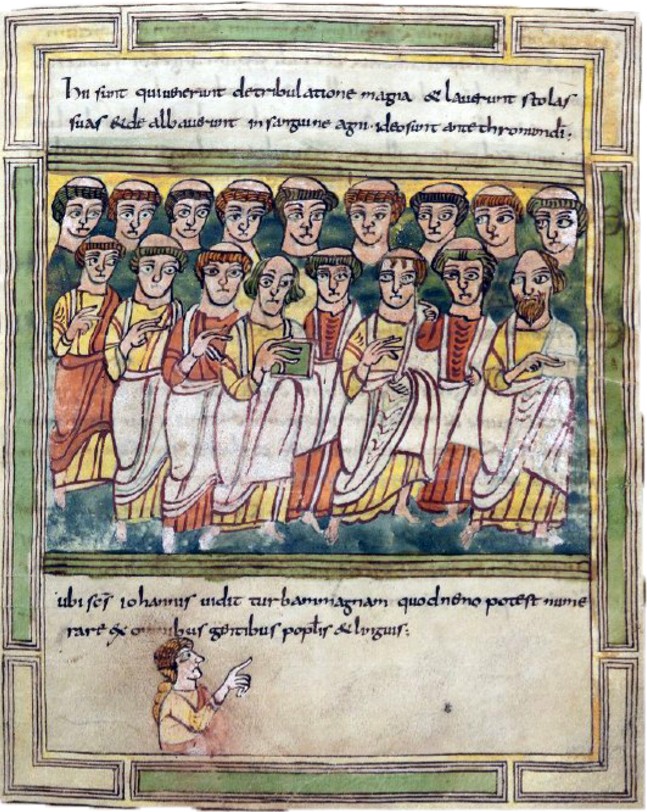 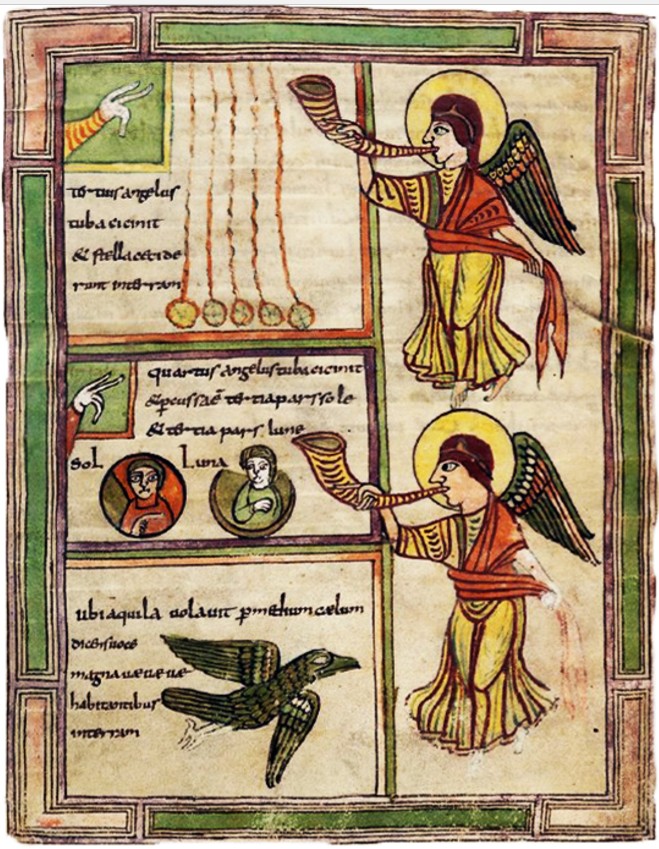 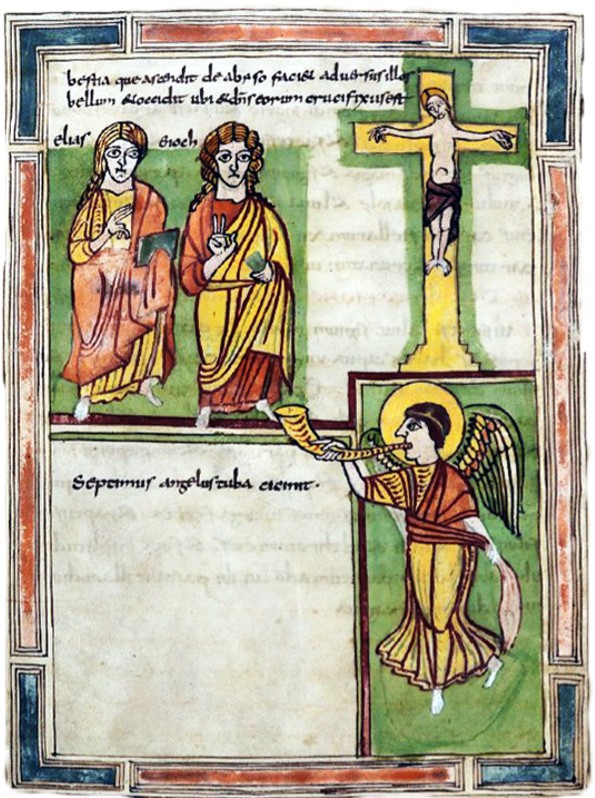 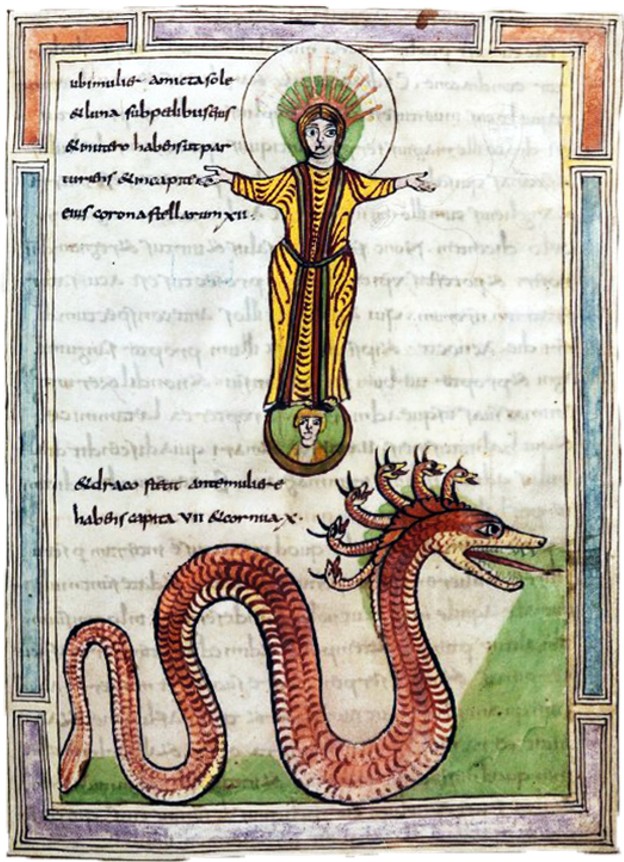 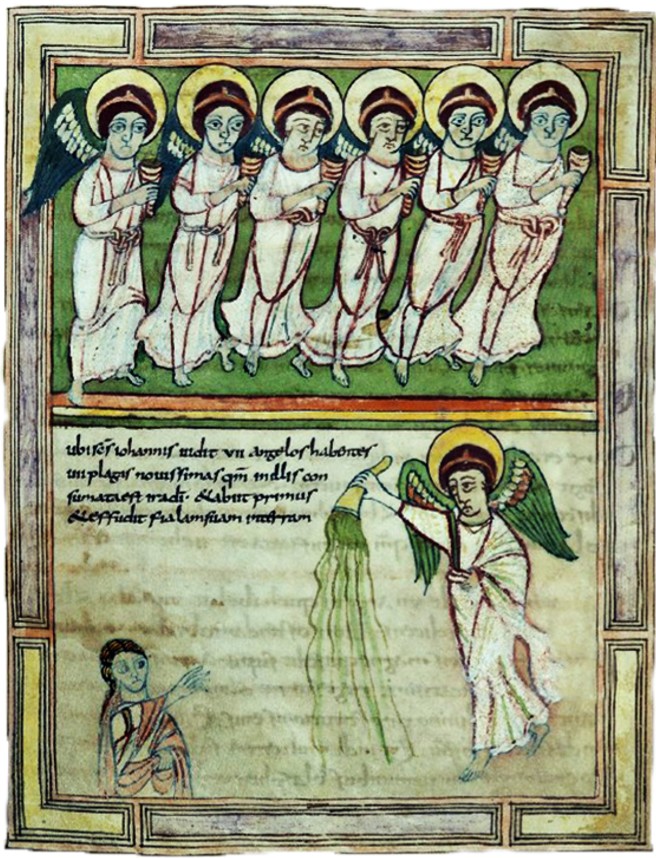 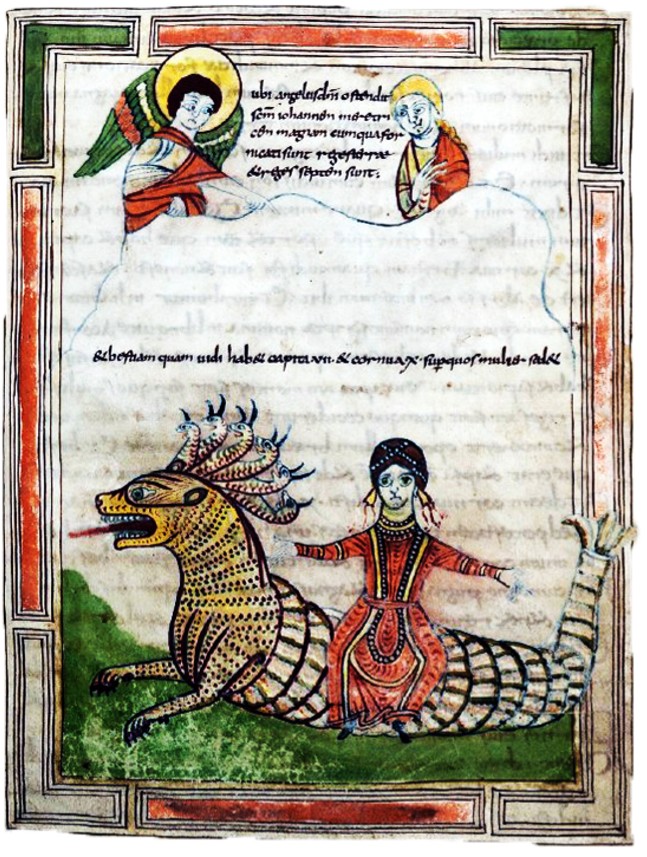