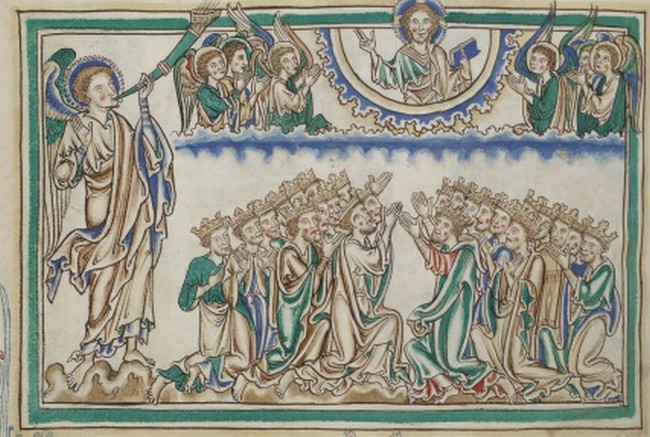 Dated around 1250, it is one of the oldest examples of the Gothic version of the Illustrated Apocalypse, probably based on the first English model and with many details that 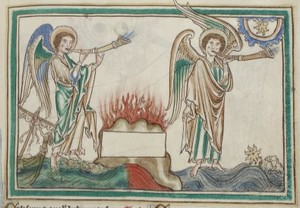 relate to older prototypes, although different models have been used for the text and for the image cycle.

His style is attributed to the Master of Sarum (Salisbury), author of two other masterpieces: the Amesbury Psalter (Oxford, All Souls College, ms. 6) and the Henry Chichester Missal (Manchester, John Rylands Library, ms. lat. 24), although his figures are taller and not as elongated as in other of his works, with complicated folds in the very characteristic garments, which makes some authors think that perhaps they were the work of other artists of high quality, also English, perhaps from the London school.

Consists of 100 pages of parchment 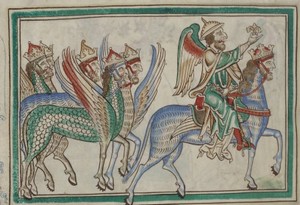 325 X 225 mm, with two-column text in insular Gothic script, and includes 90 half-page pictures at the top of the page and the text of the Apocalypse at the bottom, beginning on page 2v, since in the first three and the last three have two pictures each with images of the life of San Juan.

Of the two columns in the text, which was added after drawing the images, the one on the left is dedicated to the translation of the Apocalypse into French, while the right is reserved for glosses. In cases where the text corresponding to an image does not fit on its page, it is continued before that of the next, and even in some cases there are pages of text, without illustrations, indicating that it was not conceived as an illustrated book, but it was meant to be read.

From the miniatures, all framed, the outlines are drawn, which are then colored in green, blue, red and vermilion, with gold details in some cases. 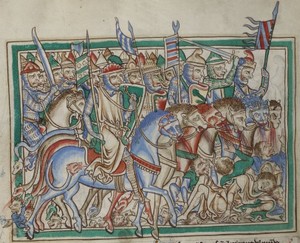 illustrations are based on the Apocalypse of Morgan (M.524), in which are included two per page with a very abbreviated text, which is extended in the Paris and made accessible to the reader not familiar with Latin translating it into Anglo-Norman.

The fact that the Apocalypse of Paris uses two different models for texts and images and that with its dimensions of 325 X 230 mm is one of the largest productions of the second half of the 13th century, as well as their quality and sumptuous appearance suggest that their manufacture was motivated by a perfectly defined request.

It is interesting to note that, like the books of hours, the 13th-century Illustrated Apocalypse was a book of private devotions. The Apocalypse of Paris is one of the oldest of the 58 that we know designed according to order of a specific individual.

The Enigma of Fr. 403 and the Compilation of a Thirteenth-Century English Illustrated Apocalypse Author(s): Suzanne Lewis 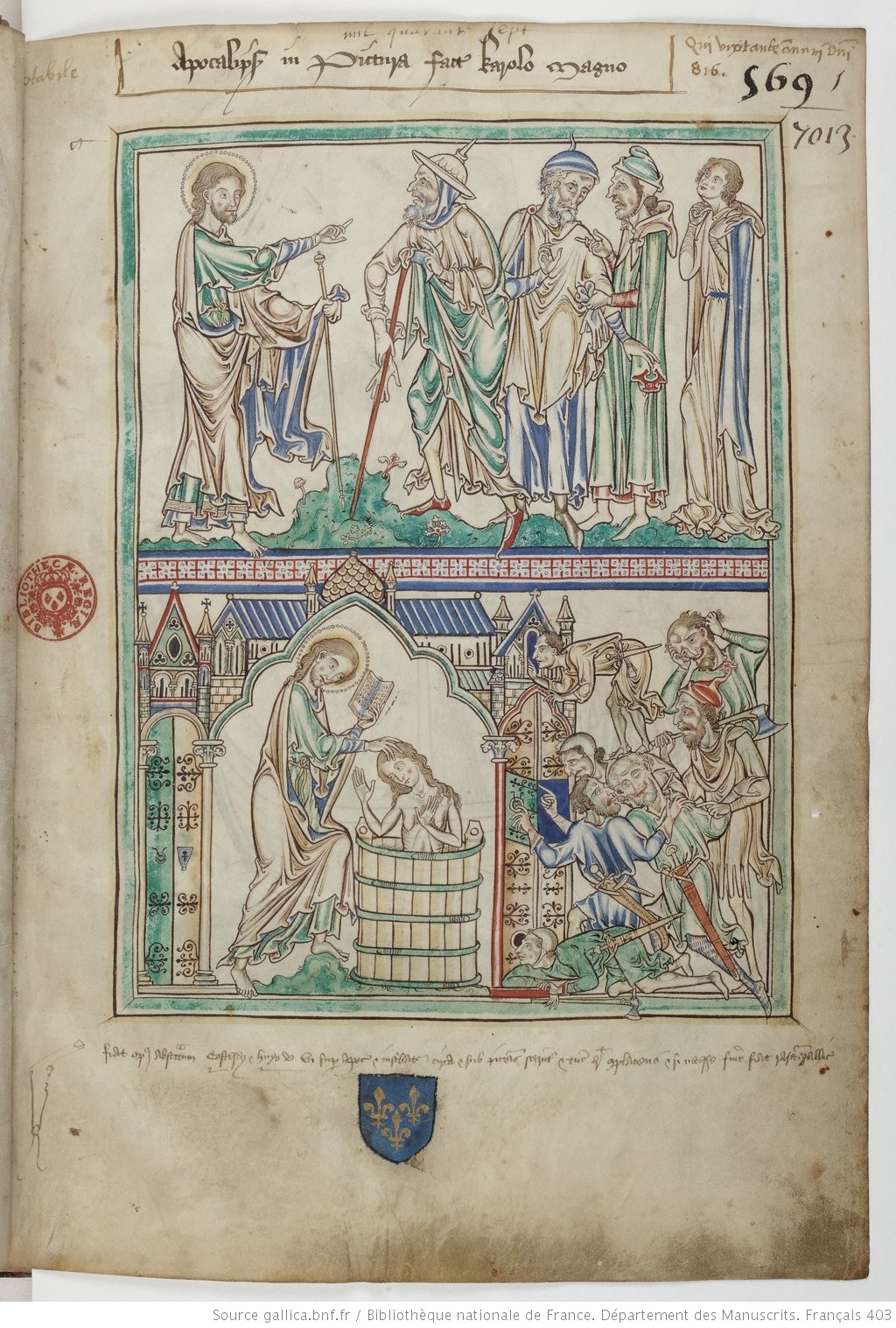 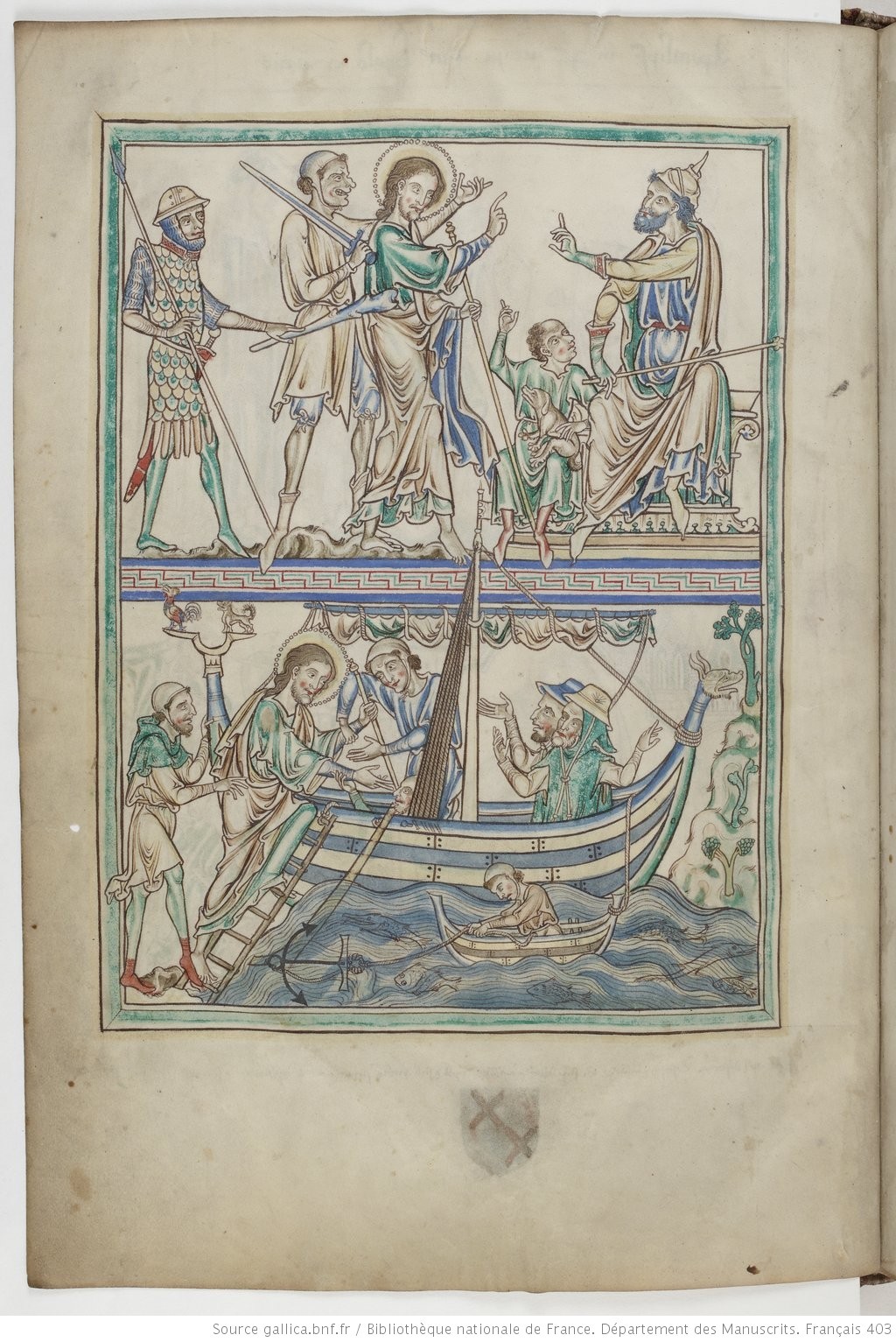 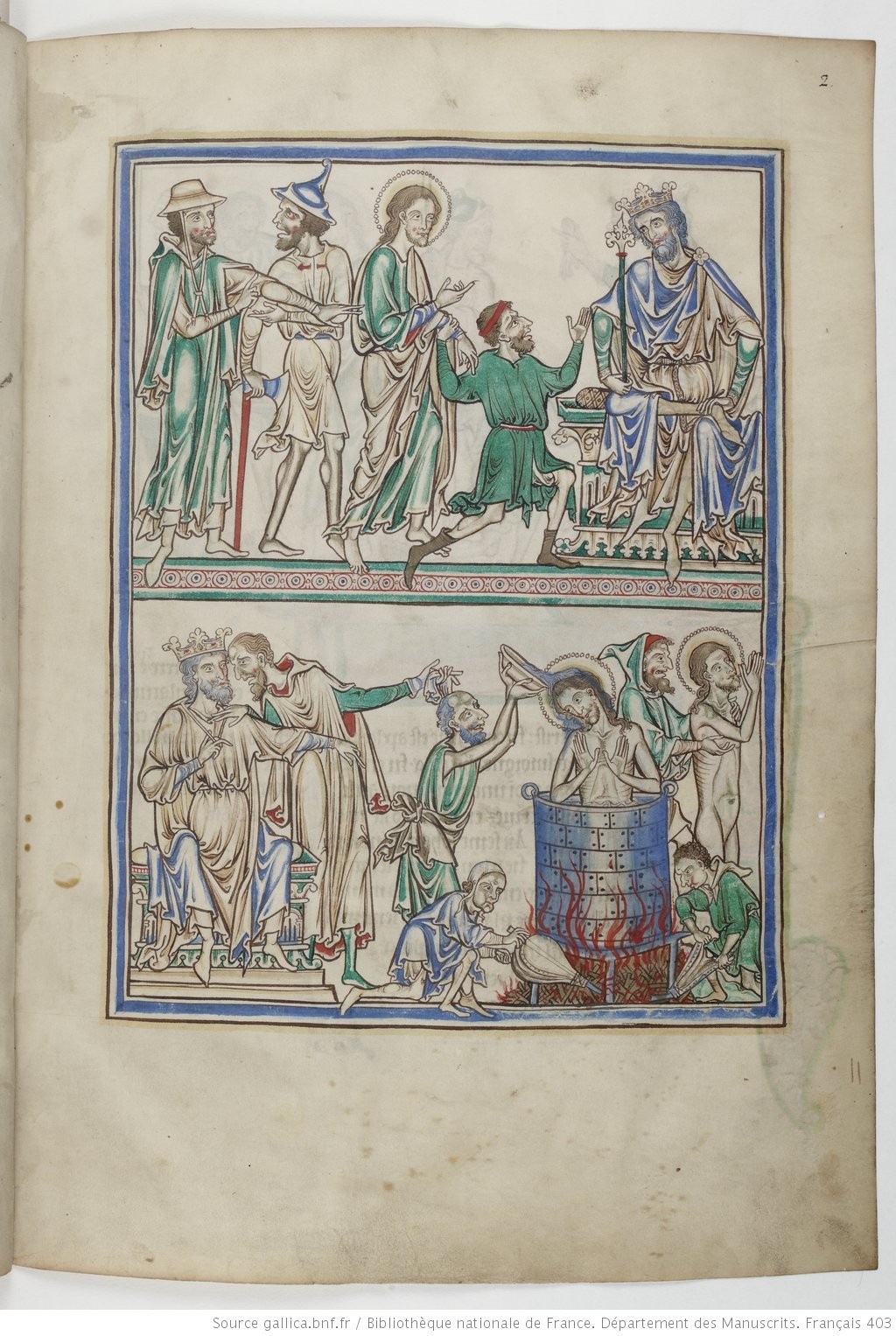 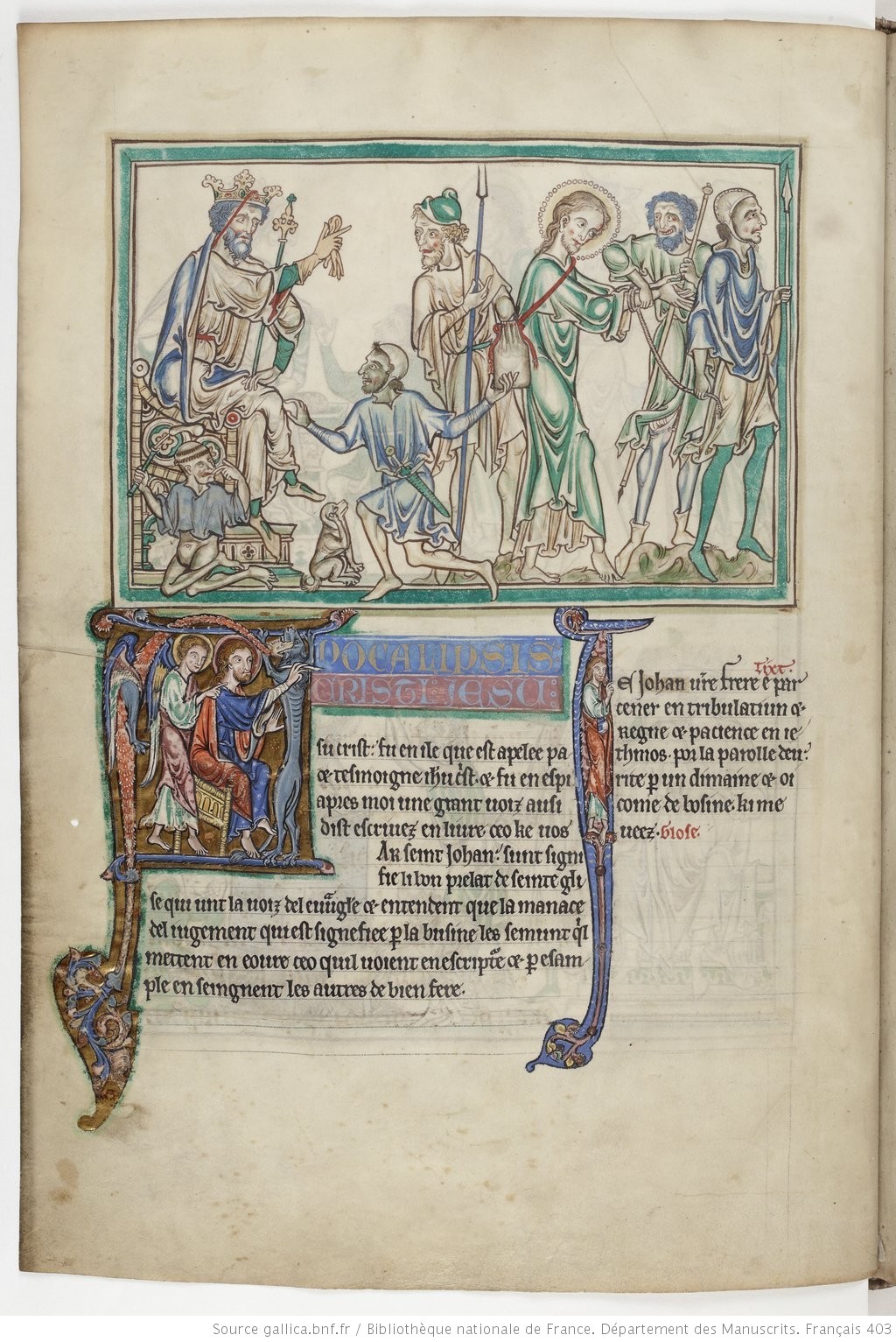 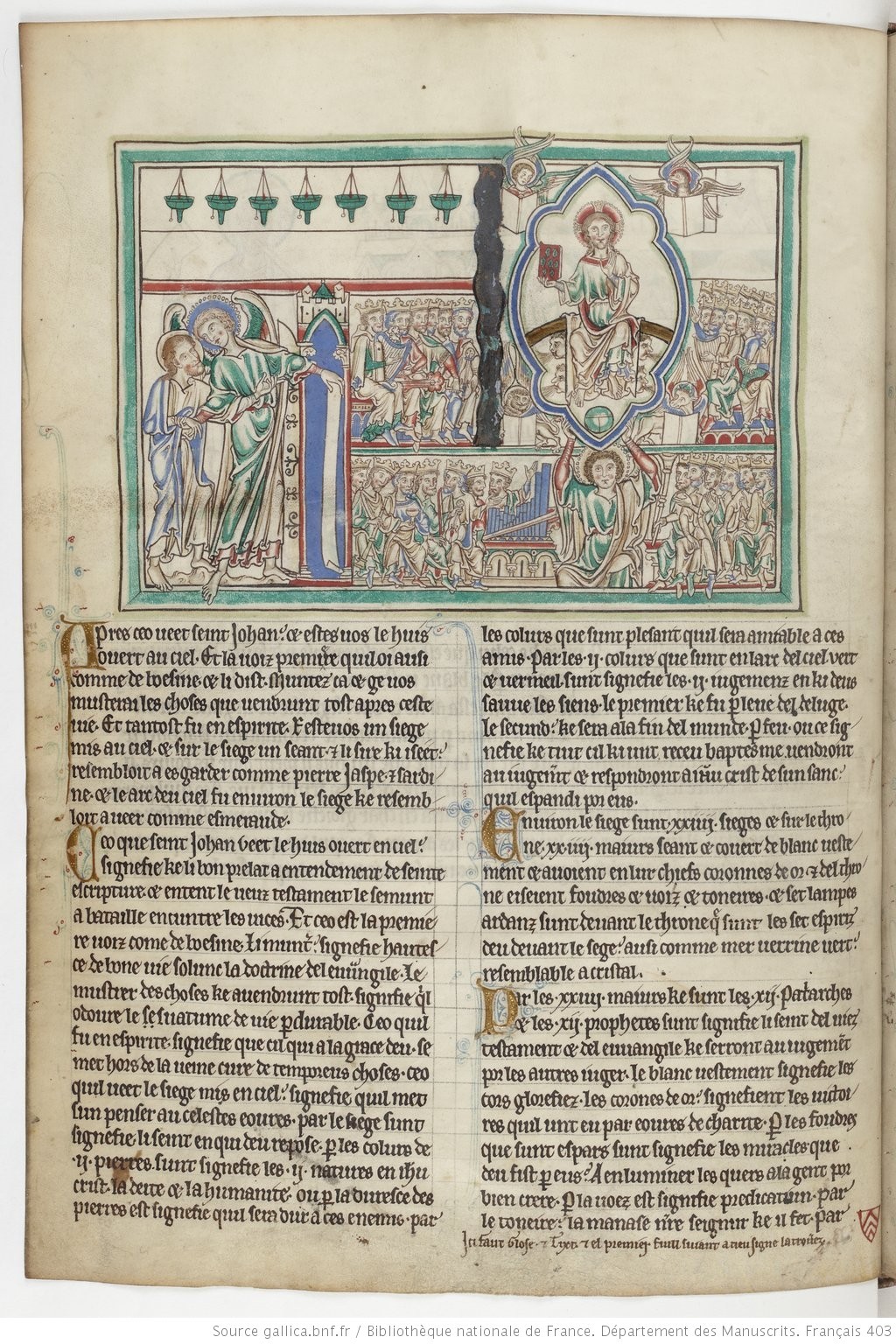 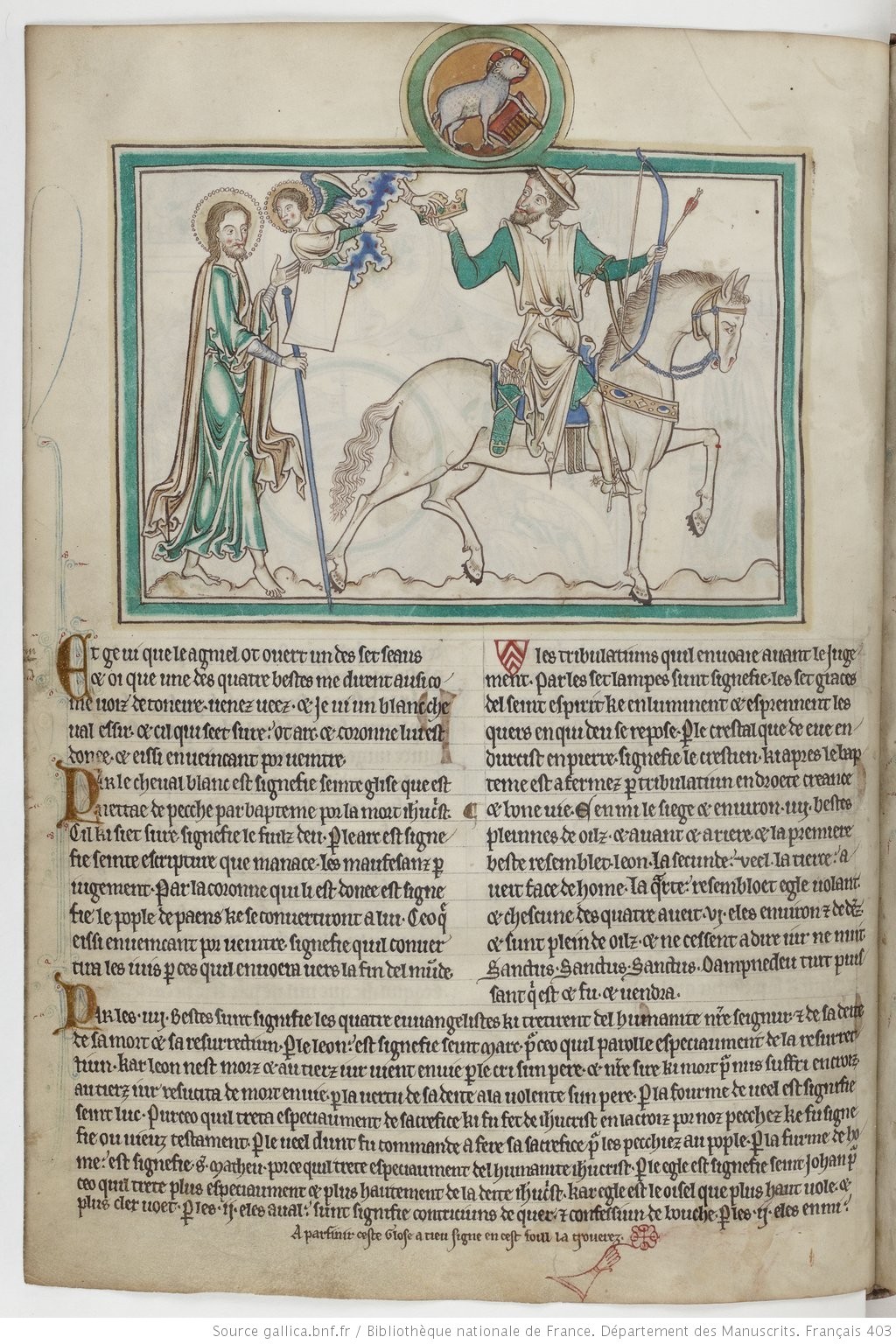 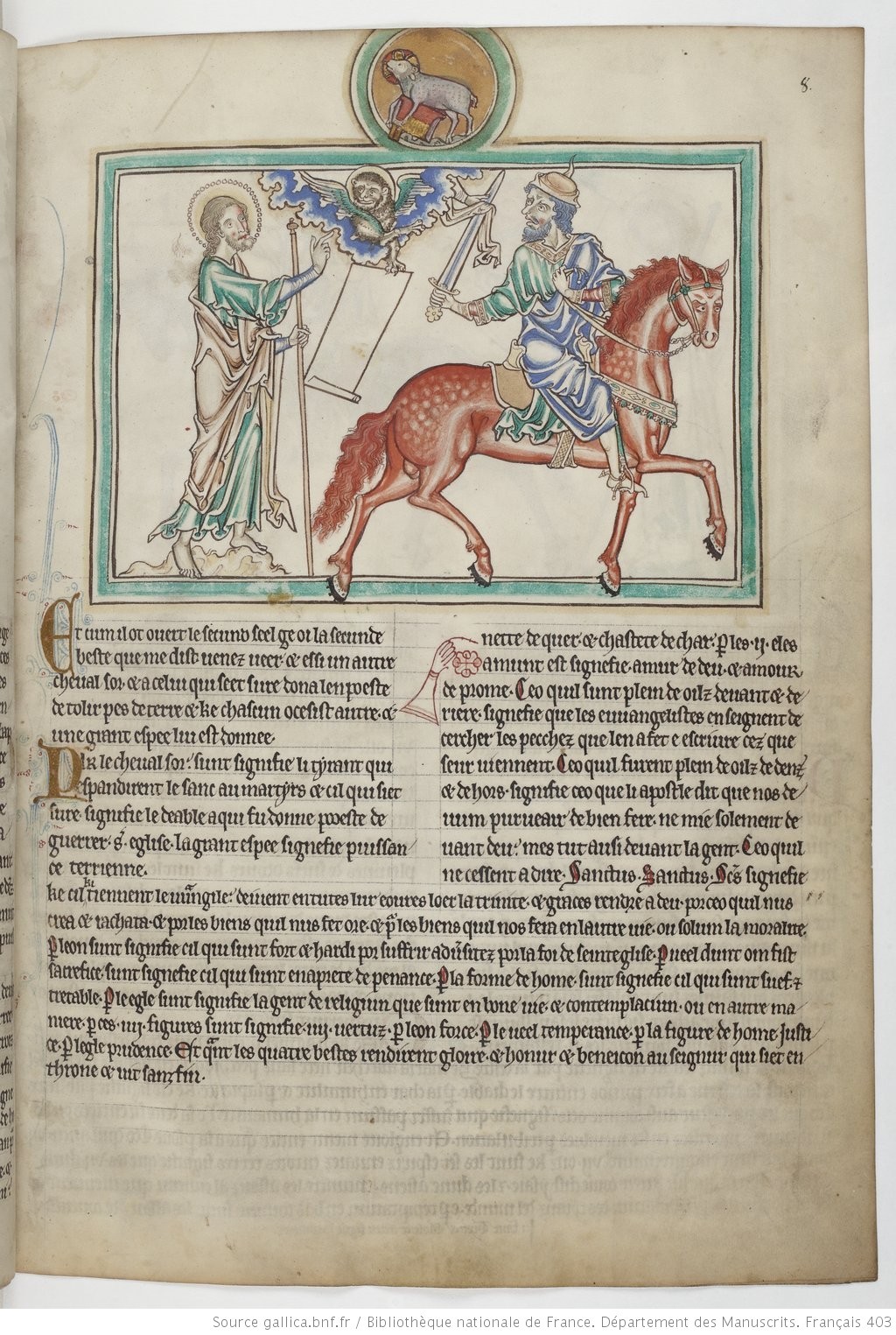 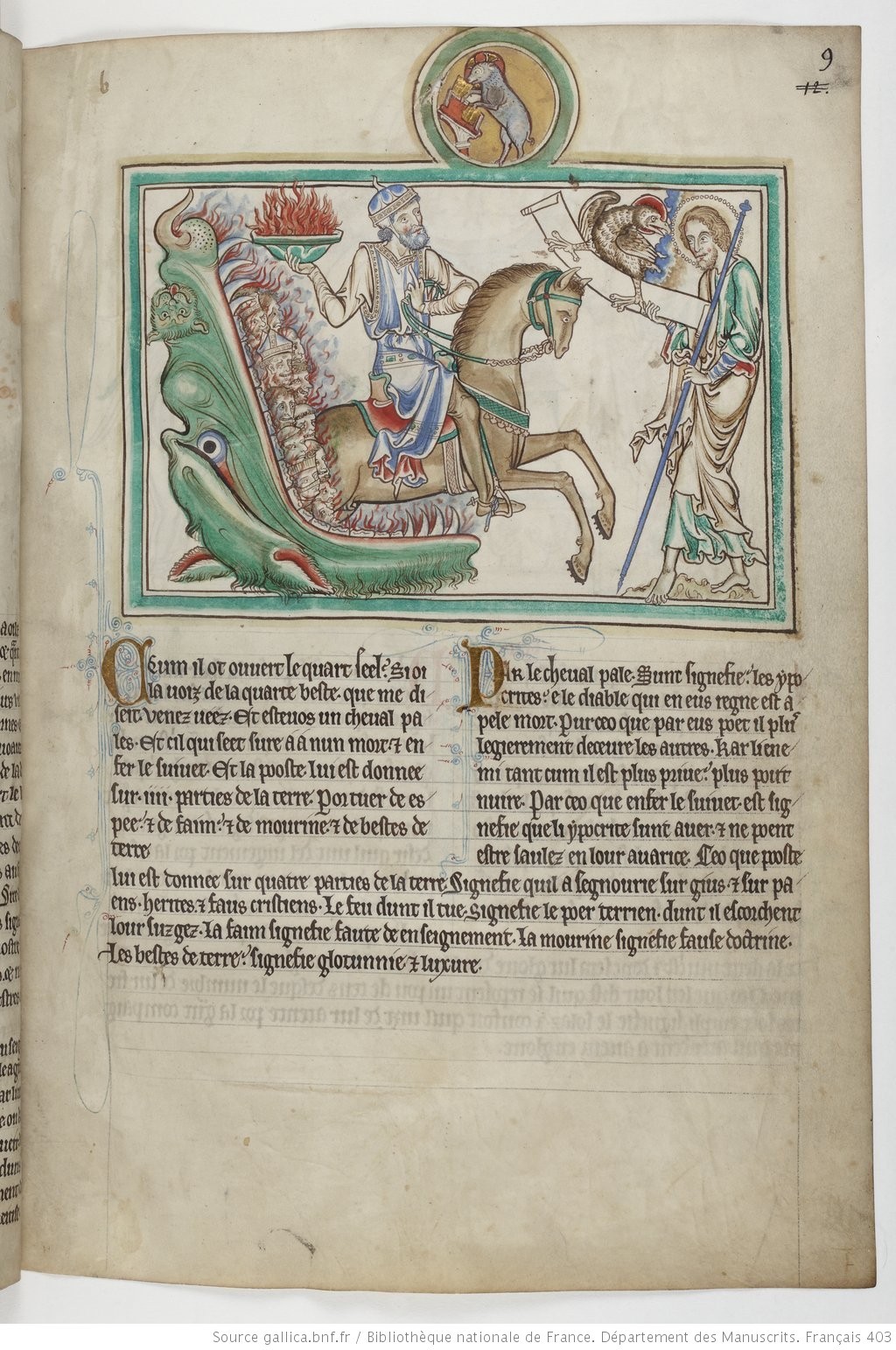 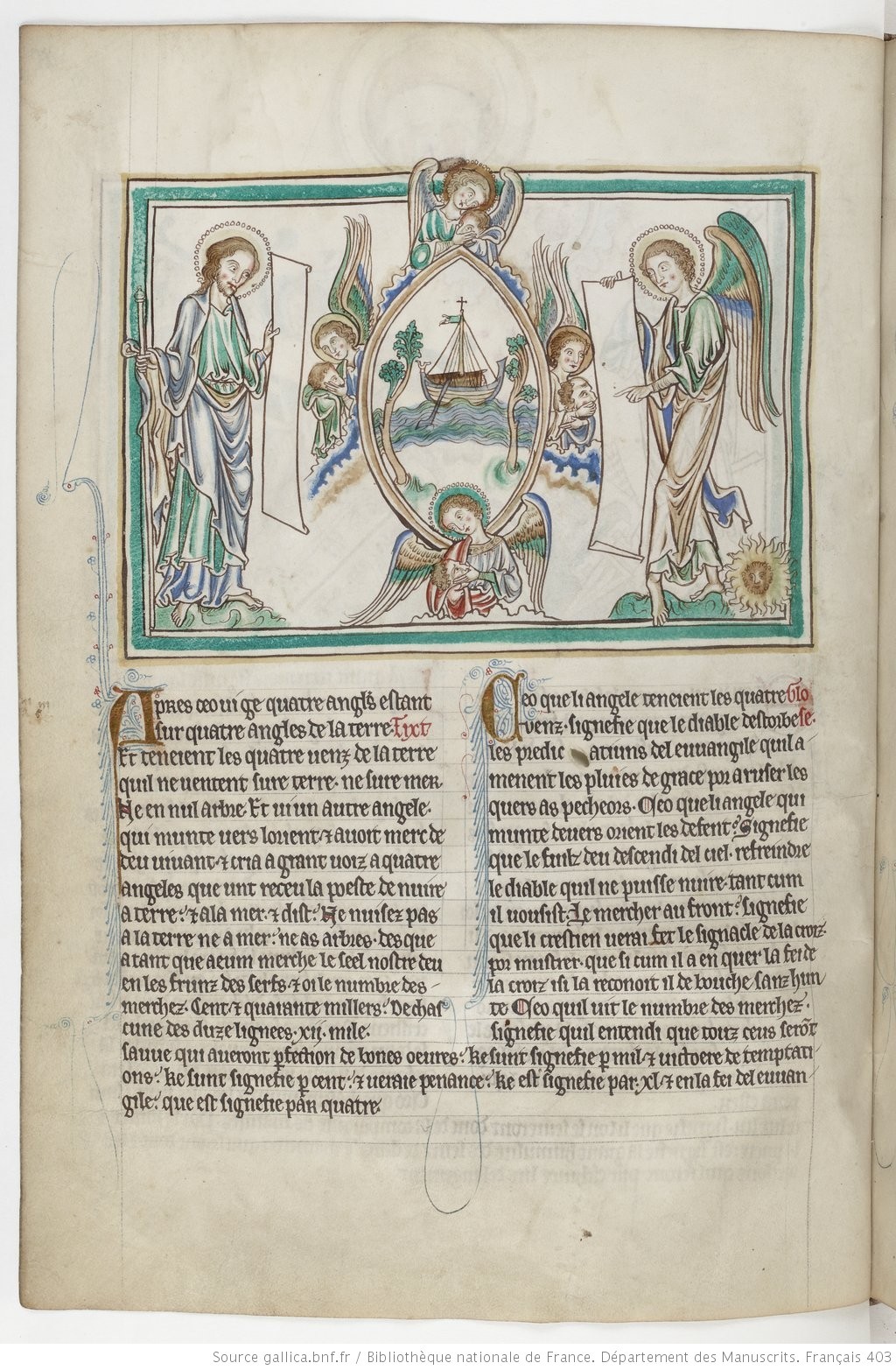 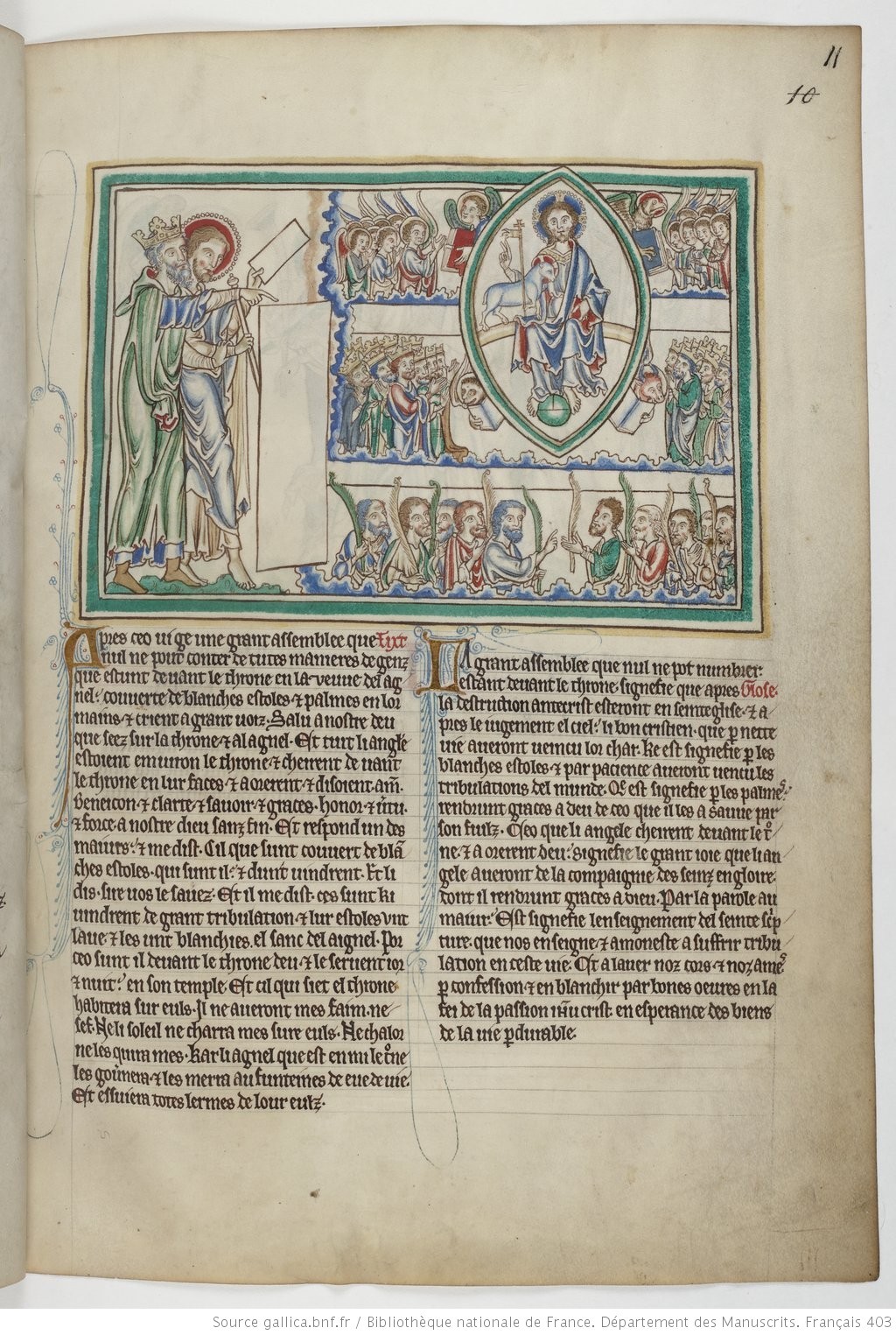