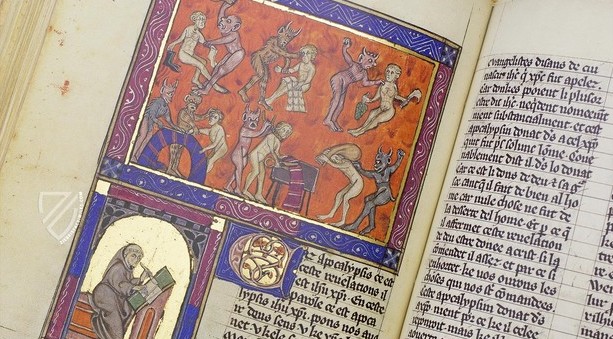 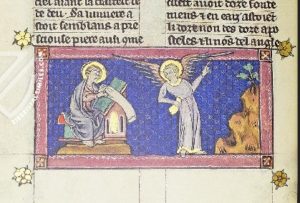 Also known as Queen Elizabeth’s Apocalypse, it includes a colophon, unusual at the time, in which it is reported that it was completed on October 13, 1313 by Colin Chadelves, artist of the same period known in Liège and is one of the first cases of an Apocalypse painted by a layman. It was probably commissioned for Elizabeth of France, daughter of Philip IV and Queen of England, probably to commemorate the visit a few months before Edward II and Elizabeth to Paris to attend the marriage of their brothers.

We know that this manuscript was included in the inventory made on Elizabeth’s death in 1358. It was returned to France possibly during the Hundred Years’ War, as the version of the text of Apocalypse 1313 is used in the six “Historical Bibles” all written in the reign of Charles V of France between 1350-1380. It is currently in the National Library of France, with the reference F 13096

Manuscript of 167 folios of parchment including 162 large colored miniatures decorated with gold and silver, with an original mix of styles 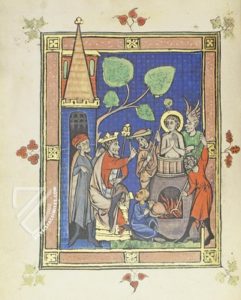 make it one of the most interesting illuminated manuscripts of the first quarter of the 14th century, decorated with one of the most extensive and original picture cycles of the Book of Revelation, completed by a text and special commentaries, both in French, and focused on intimate devotion and private meditation, which represents an important change in the conception of the Gothic Apocalypses, a change that was also reflected in English Apocalypses of his time such as those of Spencer and Bohun.

After a first page (1v) with a full page image of St.John submerged by order of Domitian in a tank of boiling oil and the text of this image in the 2nd, the Apocalypse begins in folio 2v and ends in the 85v; on all its pages the biblical text appears on the left side (verse) while on the right (straight) there is a full-page thumbnail illustrating the 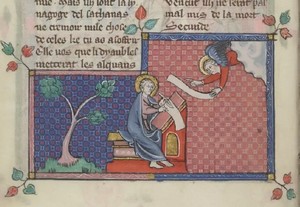 text in the image, although sometimes a small image is also included in the bottom third of the text pages. Below, on the pages from 86r to 87v, are images of the damned in hell, followed by a compilation of text commentaries, French translation of another earlier Latin, which occupies from page 88v to 166, without miniatures.

The magnificently colored miniatures have a great dramatic force by the gestures of the characters and the dynamism of the scenes, they have a very homogeneous style throughout the manuscript, in which he emphasizes the importance given to the representation of hell and torments to the damned something that in other codices is usually treated as another element. Here the condemned in Hell suffer the most terrifying and surprising tortures that the miniaturist presents with all luxury of details.

It is interesting to note how in this manuscript the reader simultaneously accesses several levels of coherent and complementary information: the image, with conventional iconographic models, a complete apocalyptic text translated into French and the commentaries, also in French. 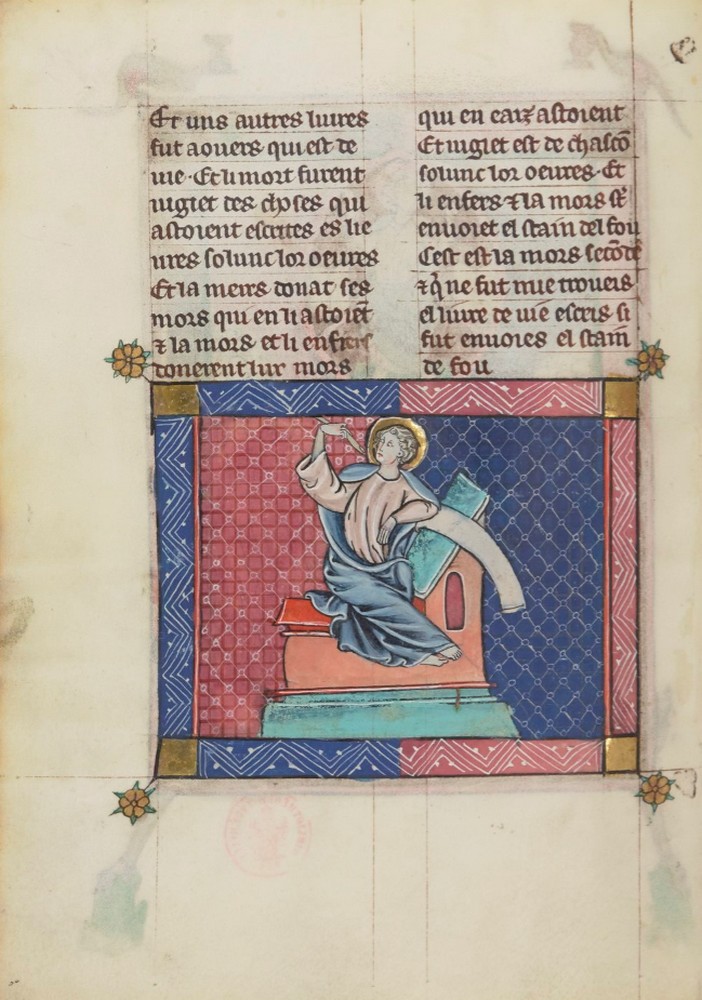 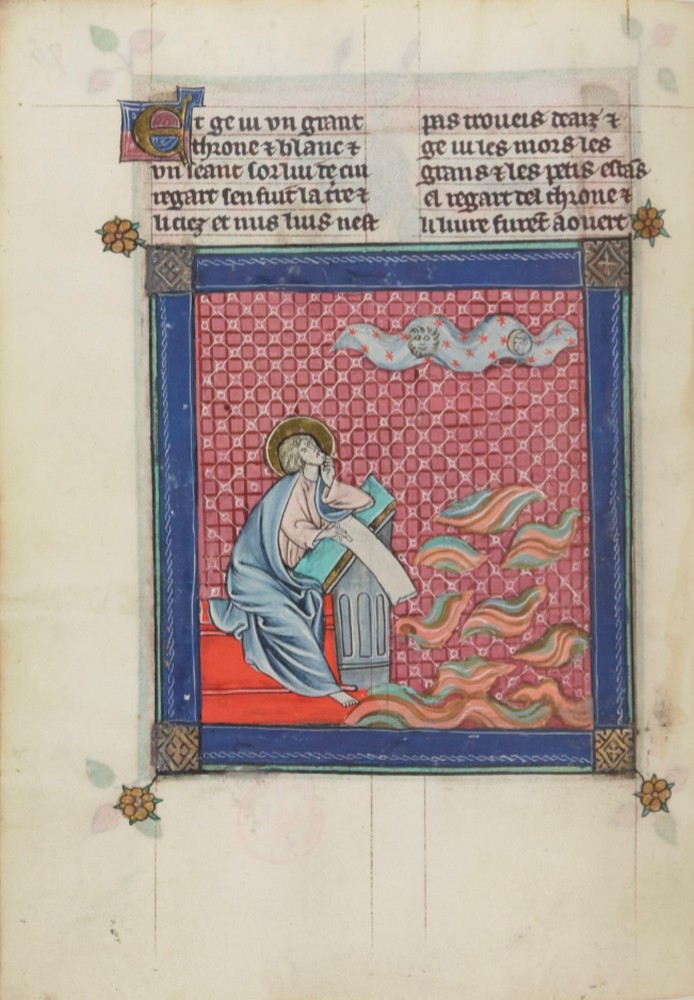 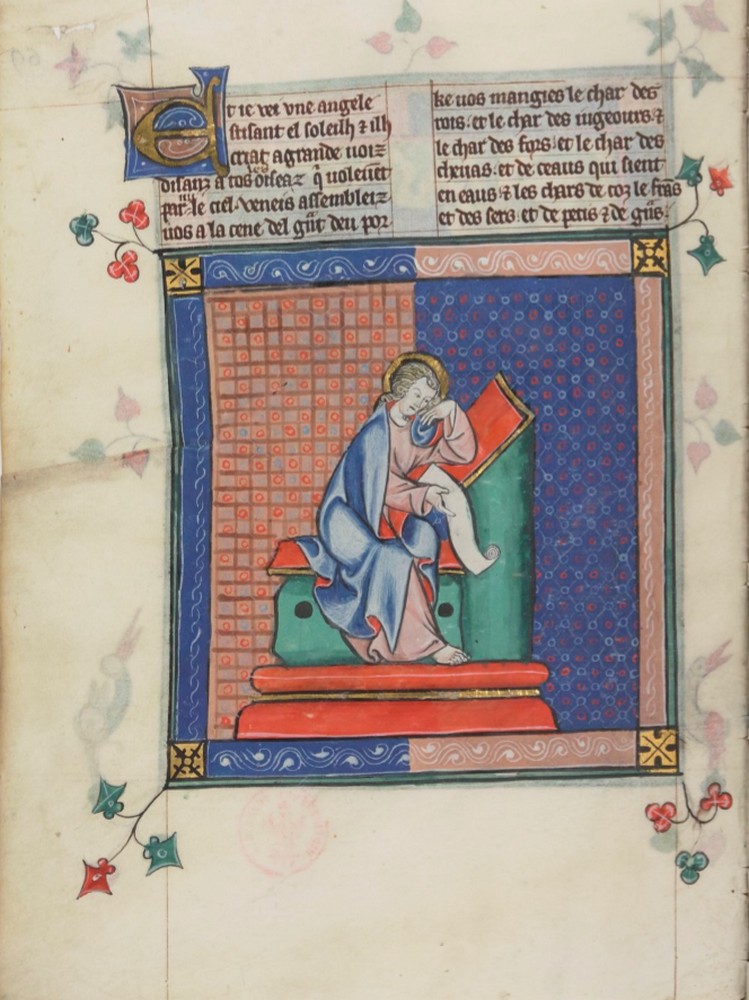 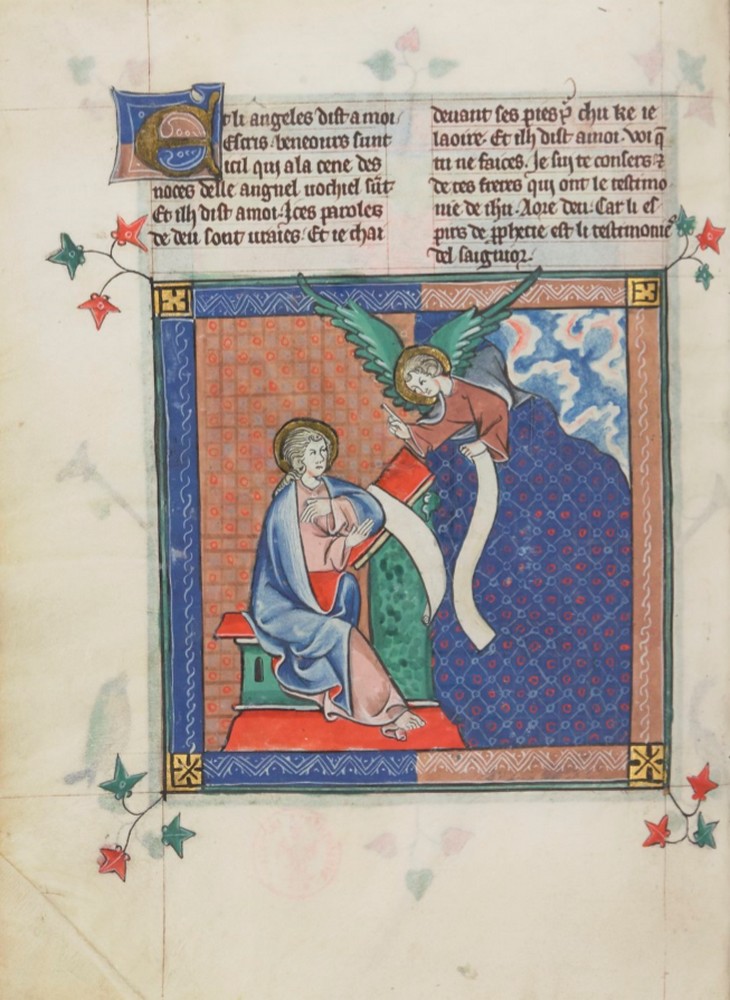 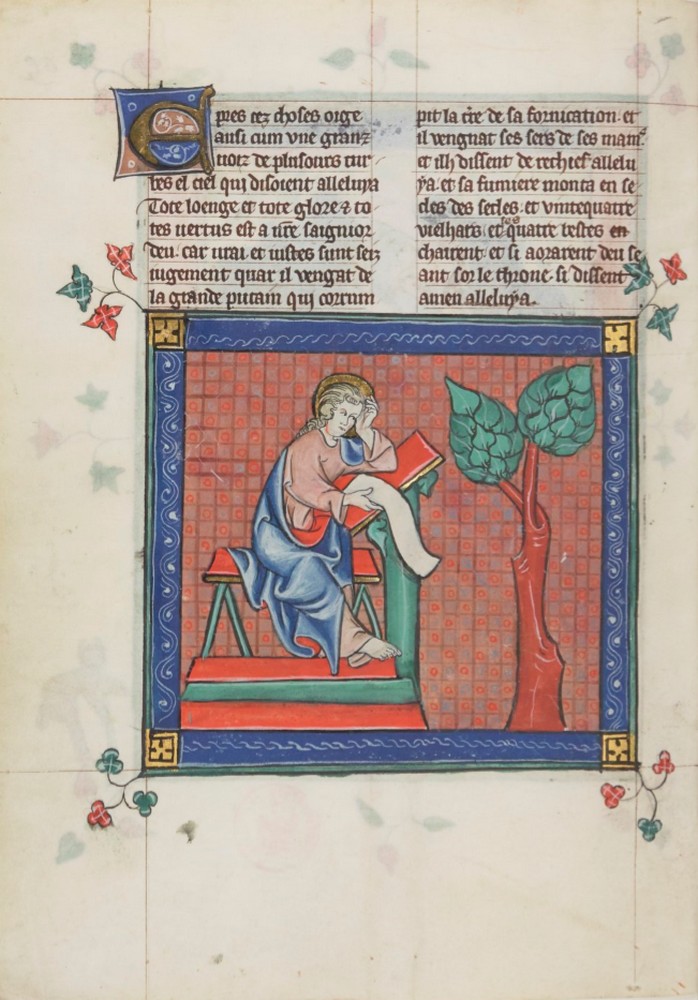 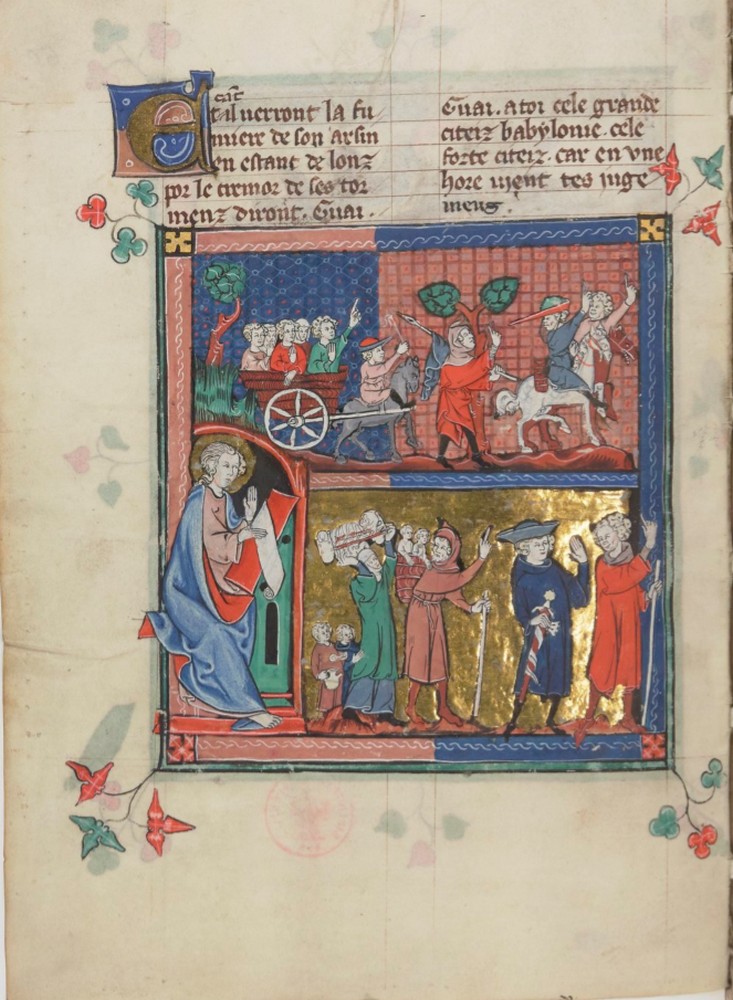 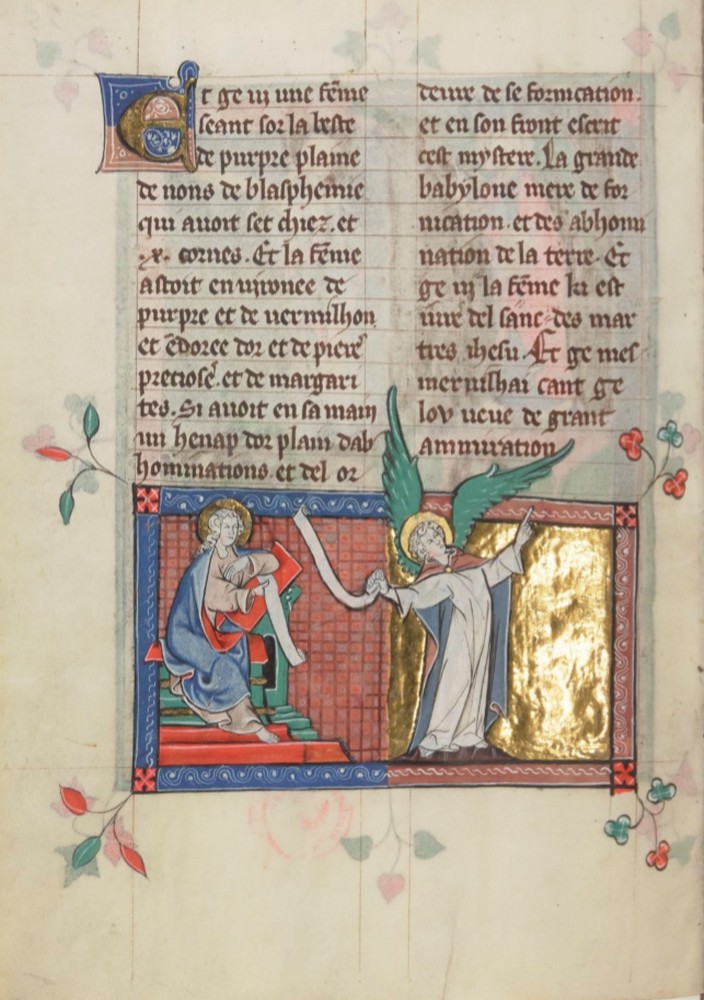 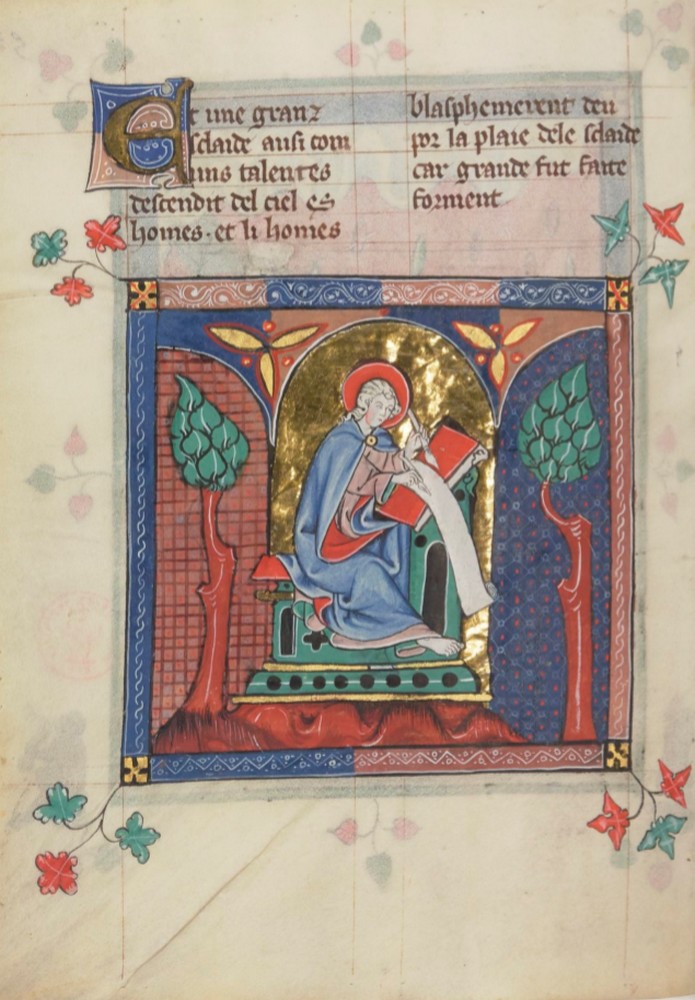 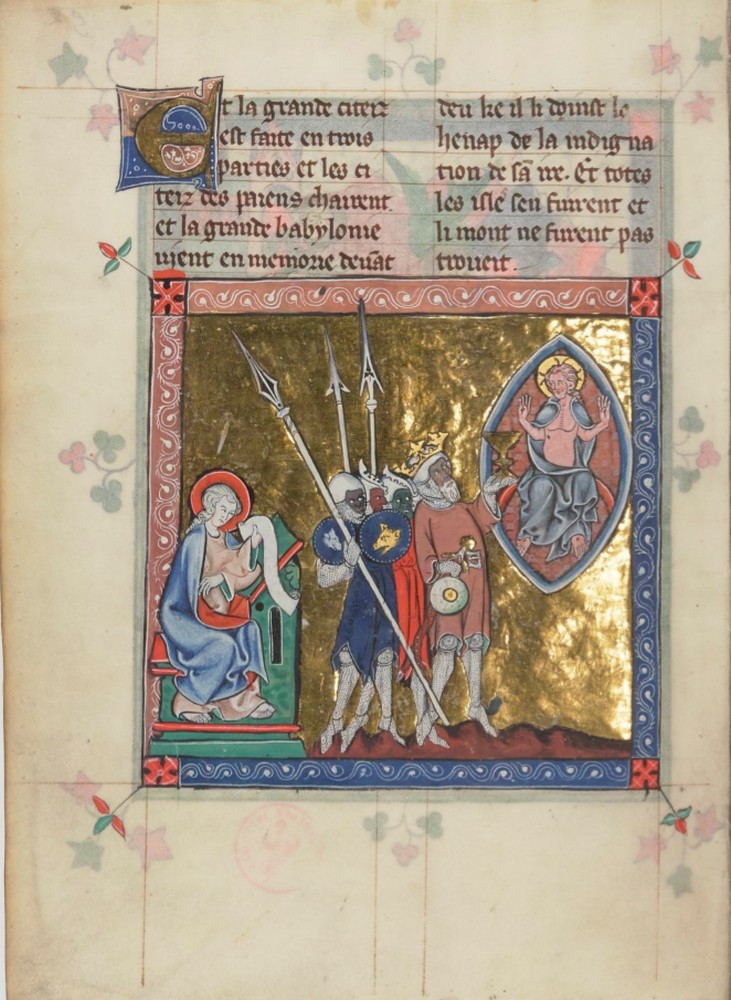 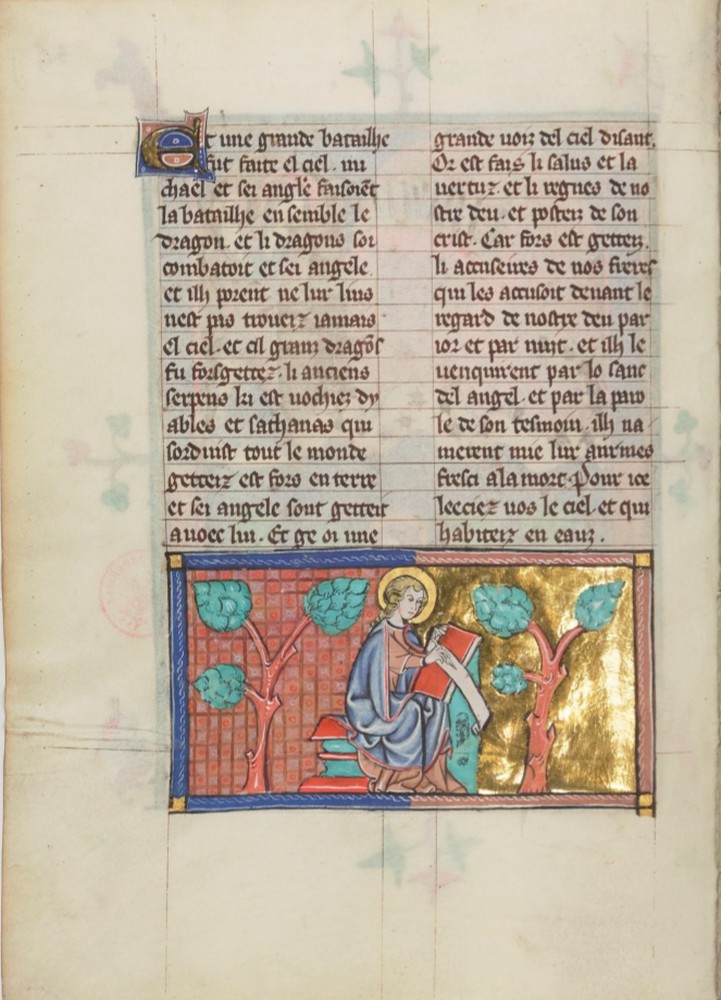