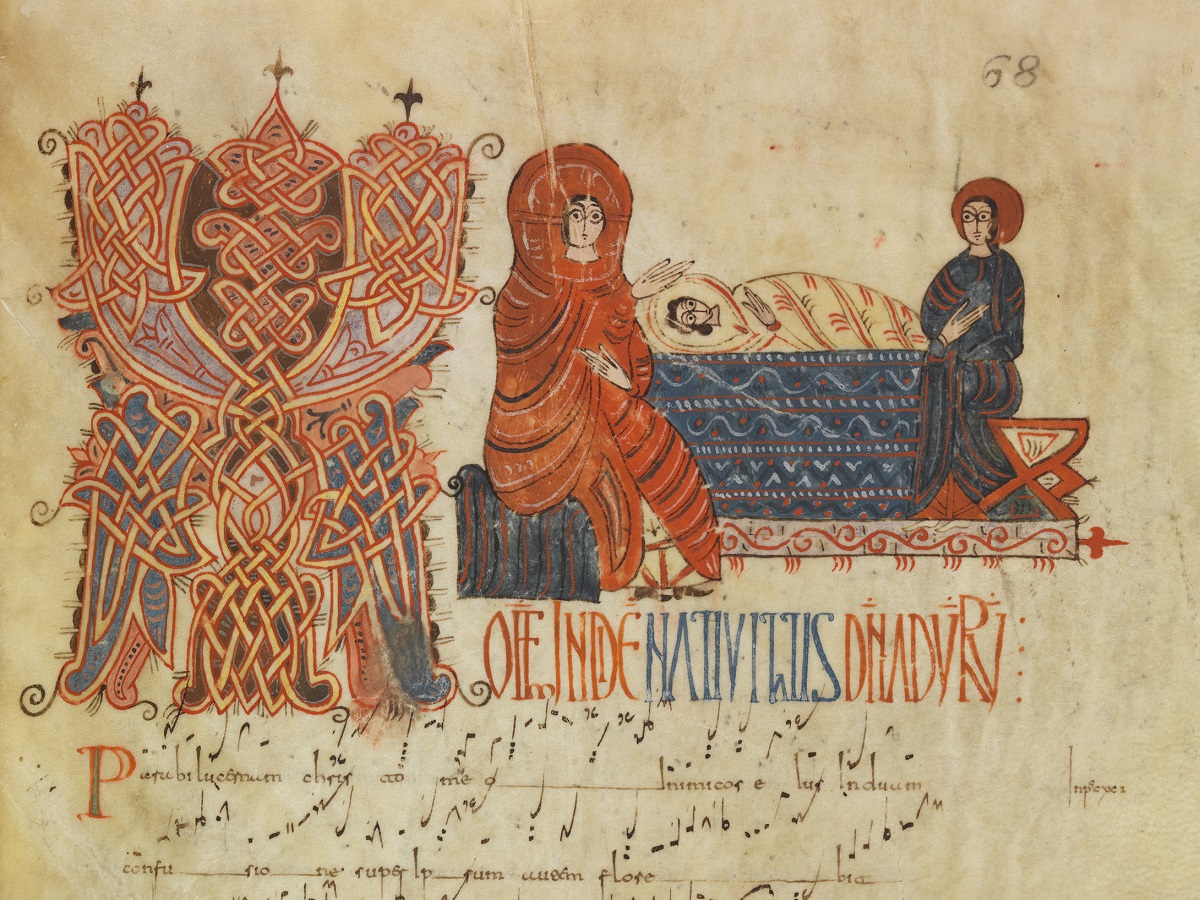 We would like to congratulate Fr. Laurentino-César López Sánchez, parish priest of San Cipriano del Condado during the 70s of the last century, for his efforts and his invaluable work on the history of the monastery of that name, of its abbot Ikila and of the magnificent Antifonario de León that was created there, which has helped us to clarify many of the doubtful points that we have found about this codex in other authors.

In his dedication it is written that it was copied, it seems that from a Visigoth antiphonary, possibly Toledan from the 7th or 8th centuries, by a monk called Totmundo, for Ikila, abbot of the Leonian monastery of San Cipriano del Condado.

Until recently it was thought that this Antiphonary had been created in the year 1066 by a Galician amanuense called Arias, who gives 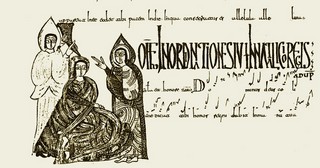 that date on page 26, but it has since been concluded that Arias intended to report, not on the date of the manuscript, but on the date of a booklet he had added at that time to the original work, which includes many other additions after its initial content.

At present there are no doubts about its dating to the end of the ninth century or the beginning of the tenth century, since in later studies it has been found in the Tumbo of the Cathedral of León, folios 349-50, the testament of Abbot Ikila – a name that indicates its Visigoth origin -, dated 26 June 917, in which he donated the manuscript, together with other belongings, to the monastery of Santiago de León, showing that it had existed before that date. Iquila was the abbot and owner of the monastery of San Cipriano, located on the banks of the Porma, possibly the primitive nucleus of the current San Cipriano del Condado. He was a prestigious person since his signature appears in many Leonese documents preserved in the cathedral archive and also in some of the Charters of Eslonza and Sahagún.

At the end of the eleventh century, following the rules of the Council of Coyanza, the monastery of Santiago -and with it that of San Cipriano, which was already uninhabited- was attached to the bishopric of León and submitted to its authority. Slowly, like so many others, it became extinct and its goods became part of the Lordship of the Bishop.

The Antifonario de León is a miniated codex from the end of the ninth century or the beginning of the tenth century, which contains the

songs of the celebrations at the feasts of the liturgical cycle and of the saints of the Hispanic Liturgy of the Visigoth period, possibly copied from a manuscript from the time of King Wamba in 672 as indicated in a note on folio 25, and was updated with new liturgical compositions, at least until the twelfth century.

On the back of the first folio, on top of a small scene in which the copyist is handing the book to the abbot, there is a dedication in which it can be interpreted that the Antiphonary was created in the monastery of San Cipriano del Condado, implying that he had a scriptoriun of some importance.

It is considered the most important and complete Latin musical codex of the High Middle Ages, offering abundant material on liturgy and singing in the Spanish church until its forced replacement by the Gregorian at the end of the eleventh century, because in addition to reporting in many cases the author of each song, among which are high-level characters such as San Leandro, San Isidoro or San Braulio, thanks to the various interpolations included over two hundred years in the original core of the codex, allows us to study the development of the Hispanic liturgy during the first centuries of the Reconquest. It also includes a complete catalogue of the feasts celebrated by the ancient Spanish church. Presents musical notation in unstaffed pneumos, in visigothic notation, which has not been deciphered so far.

It has an interesting and well preserved set of illustrations, many of them about the life of Jesus, of great quality, painted in very defined colors always in background 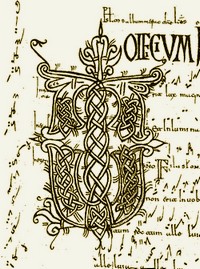 white. Some authors have raised the possibility that it is a youth work of Magius, which seems very unlikely both because of its early dating, and because of its dedication, in which it is recorded as being the work of Totmundo, and for their stylistic differences with works like the Beato de Escalada, in which the figures are always on strongly coloured bottoms. Another noteworthy fact is the use of Nordic interlaced initials, possibly as an influence of the Carolingian miniature, since they are similar to those existing in miniated codices in Fulda and Saint-Gall. We also find the typical Oviedo cross on the first page and some decoration of Asturian descent, formed by reticles of circles and crosses.

It is interesting to note that folio 234 contains, with a very special treatment, the liturgical office of the feast of the patron saint of the monastery, San Cipriano, which includes music for the antiphons and a luxury page with an allusive miniature, in a kind of presentation similar to that devoted to great solemnities. It depicts the saint dressed in minium-colored tunic, blue mantle, long stole and bishop’s pointed headdress. that offers the head to a barefoot sayon, with panties panties, short clothes girded to the waist and a small clinoid hanging. With his right hand he points to the victim and on his left he wields a long sword. 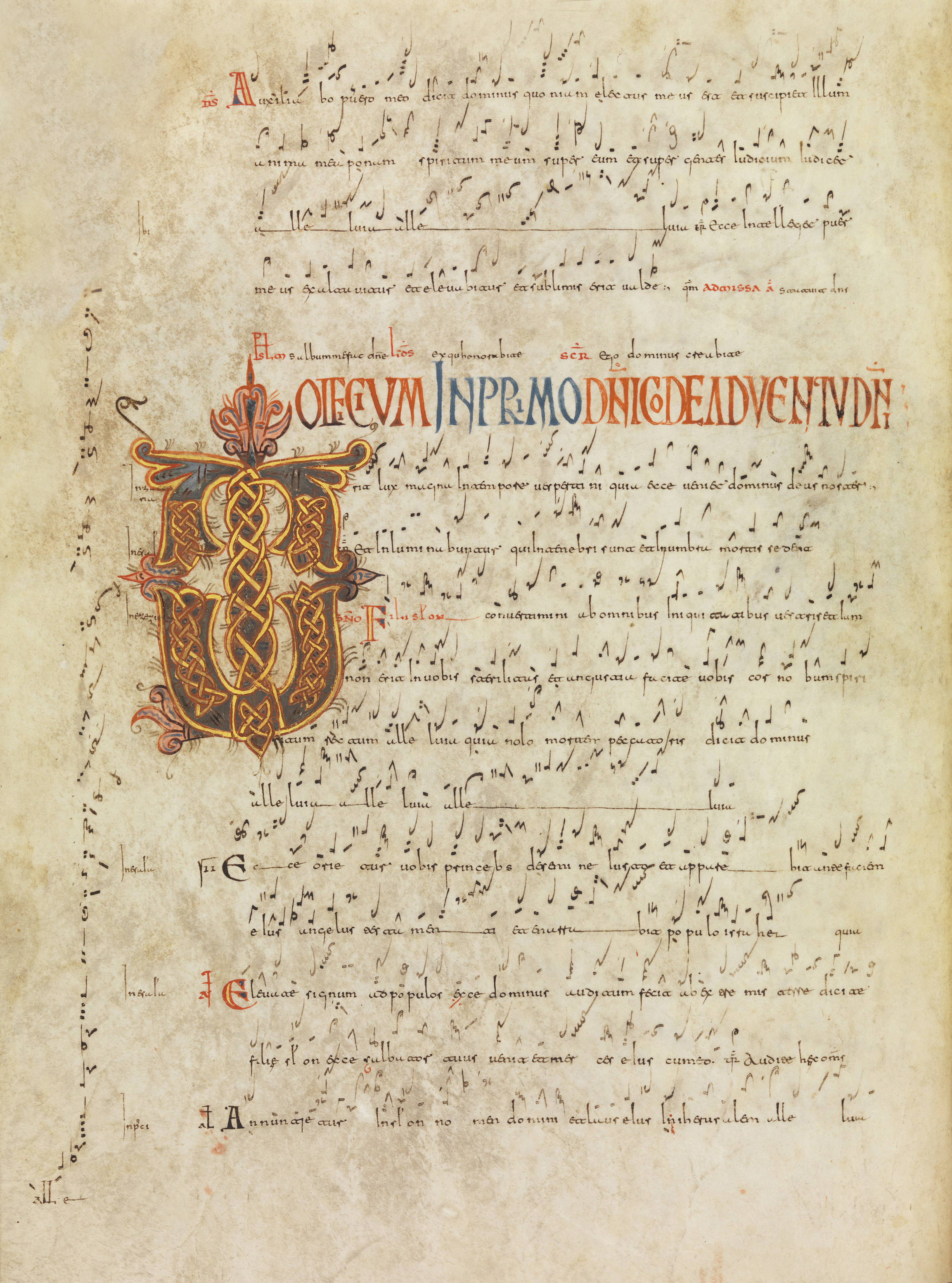 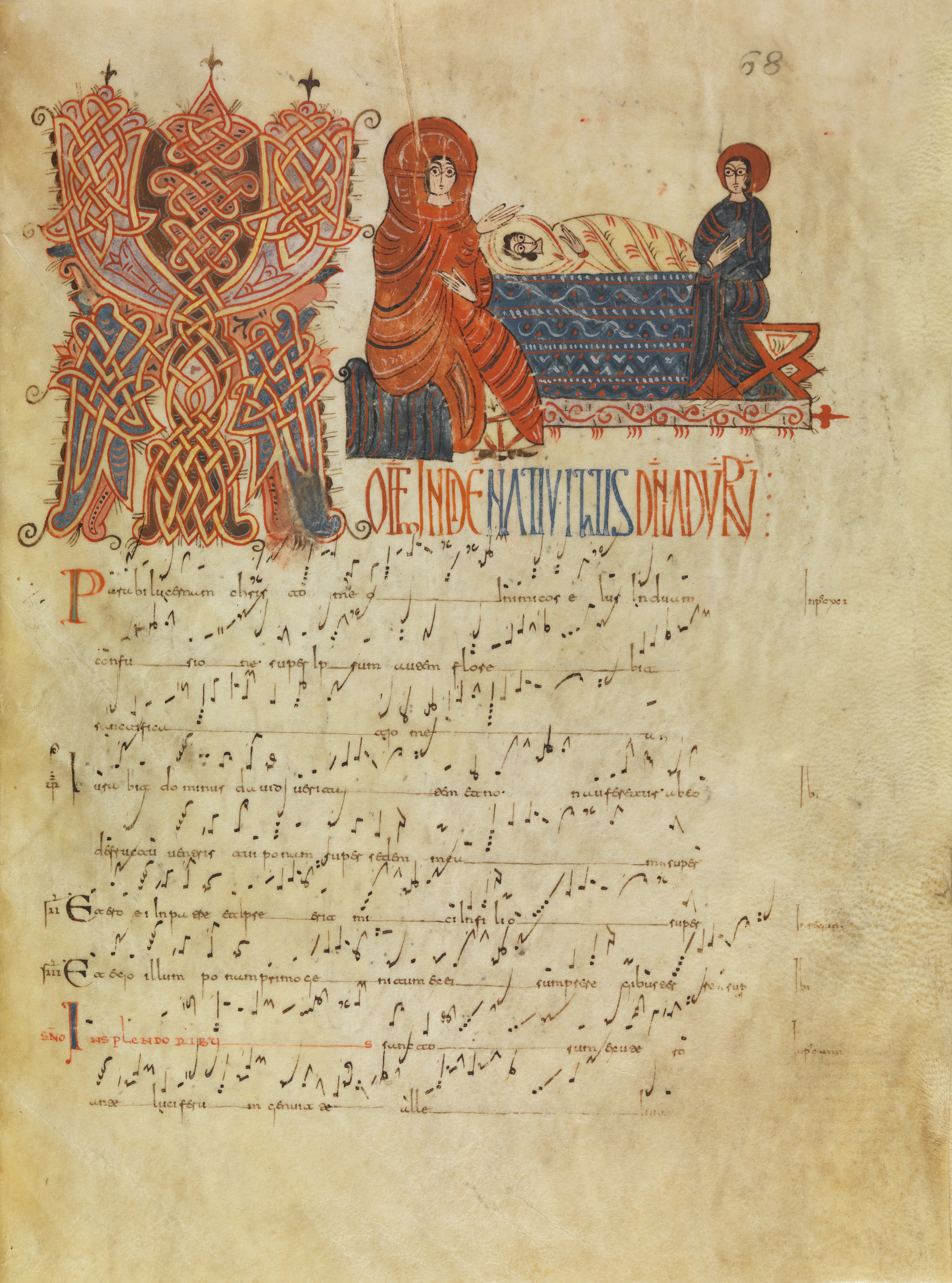 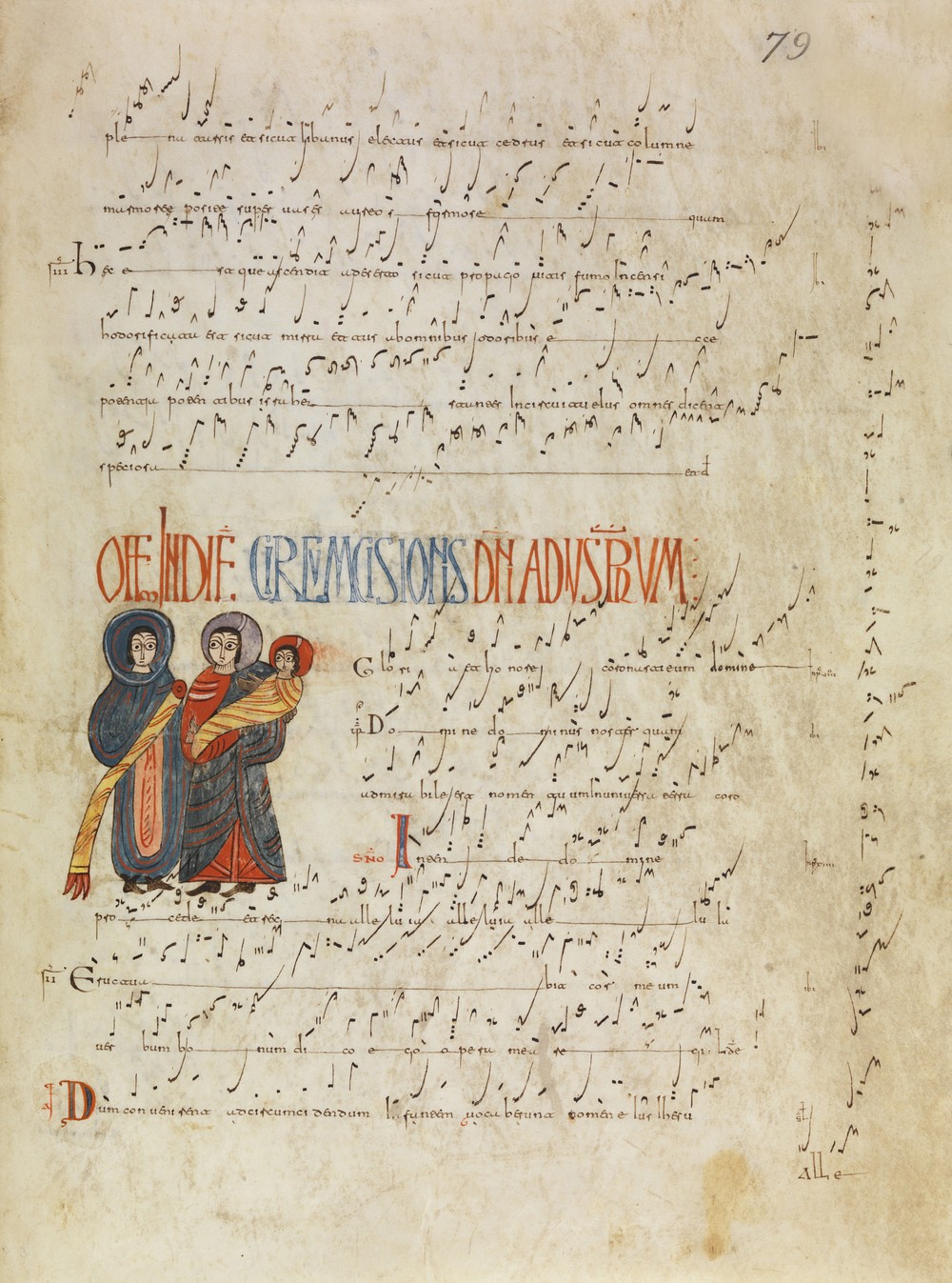 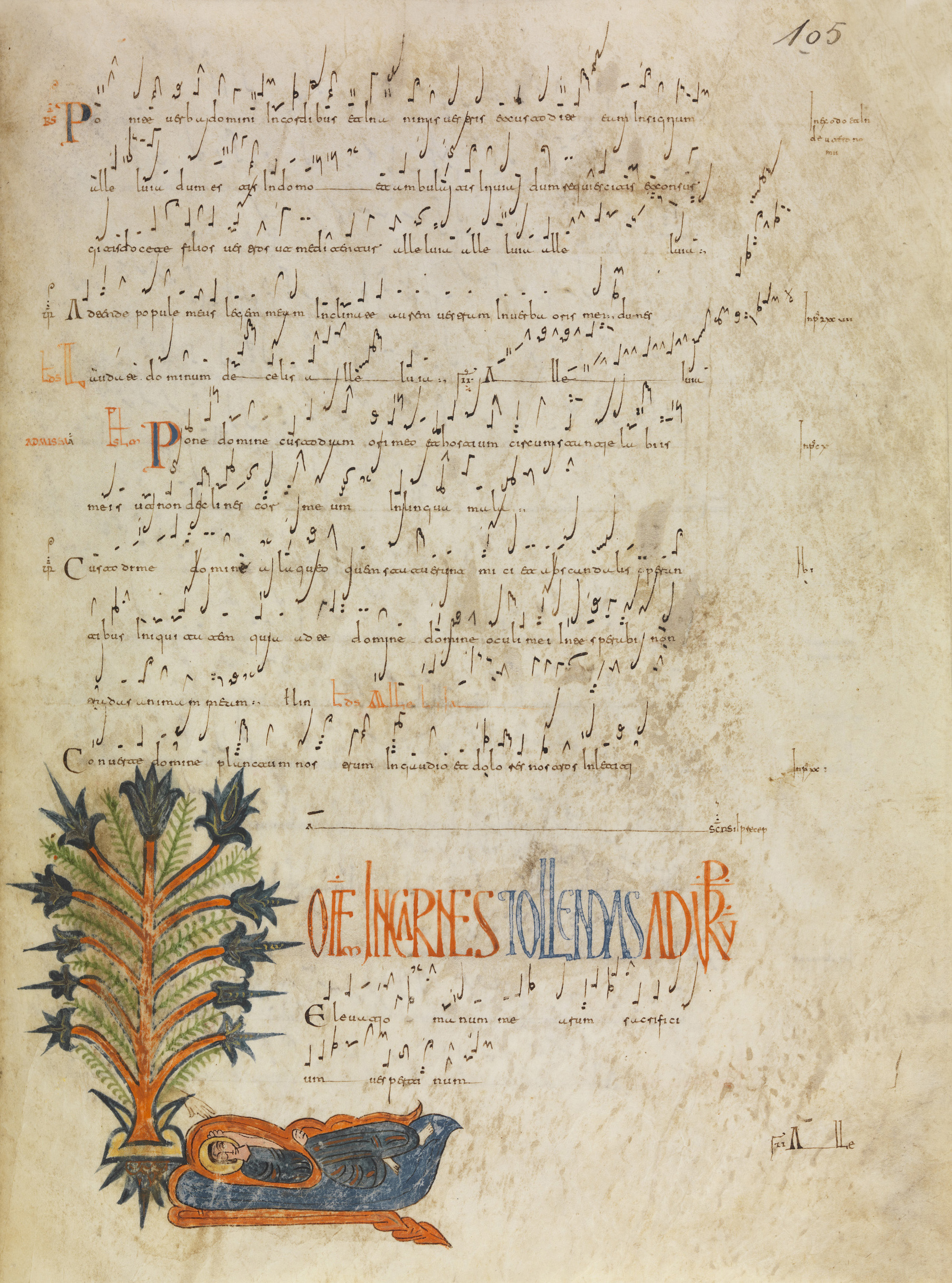 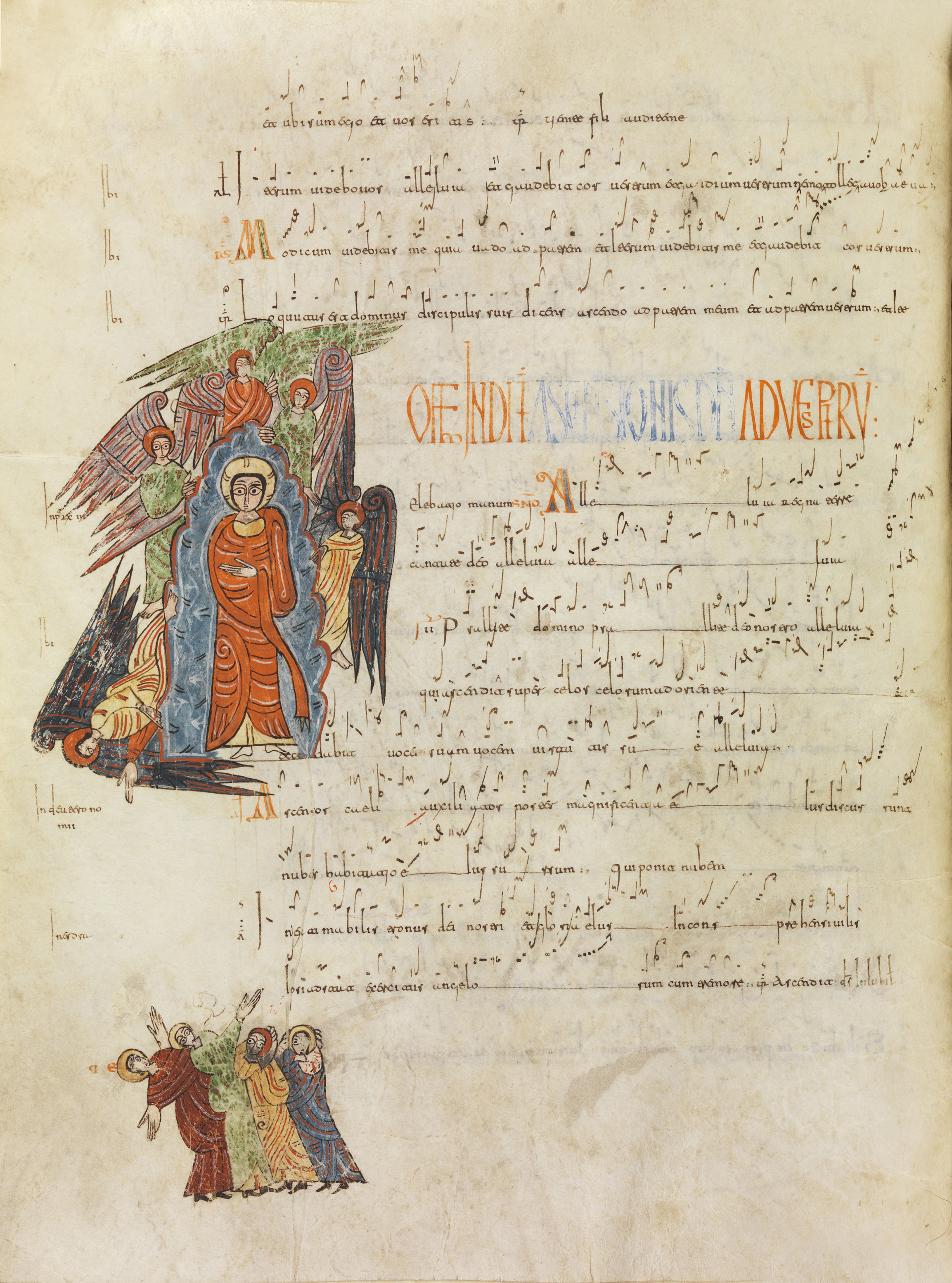 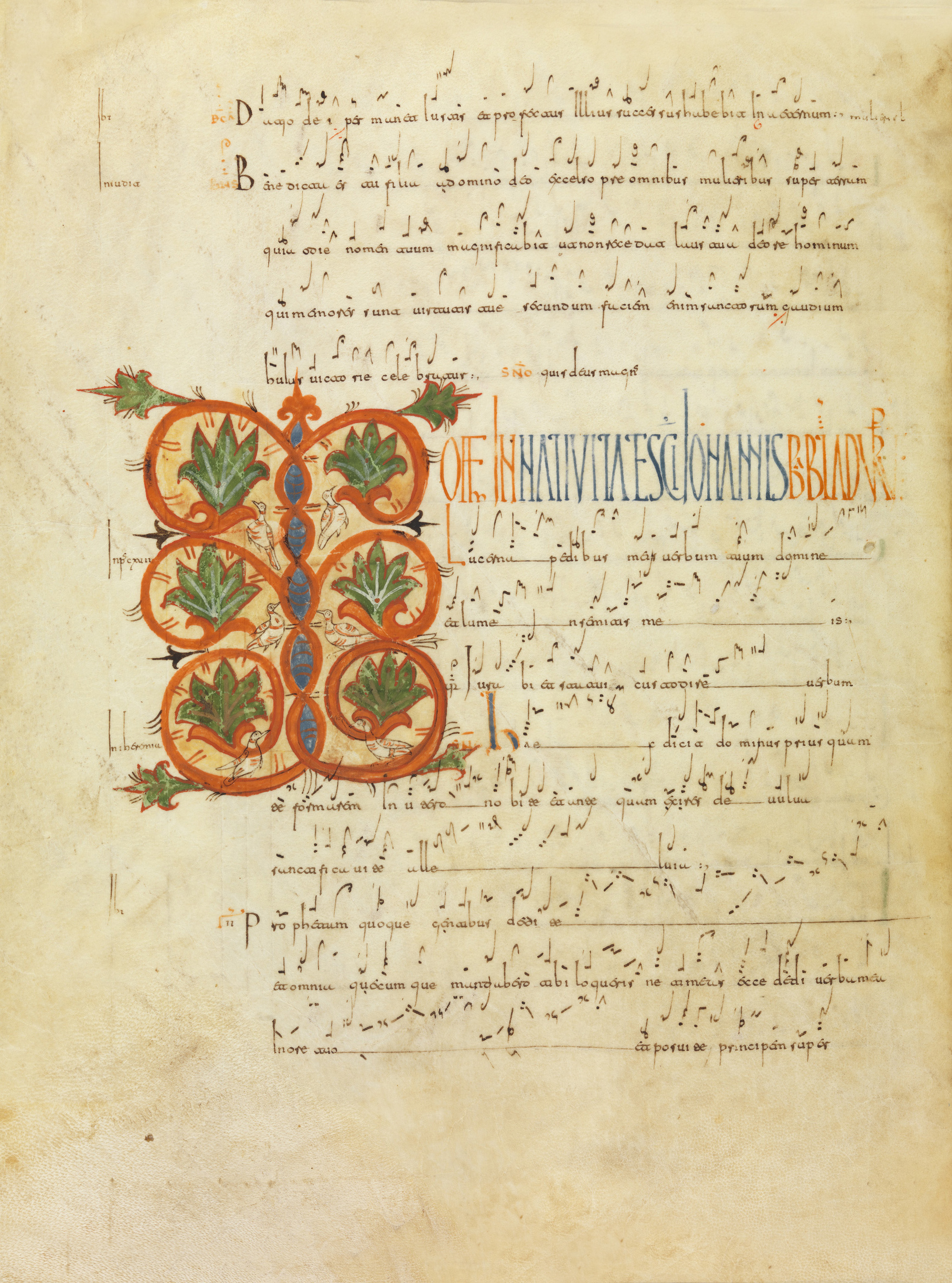 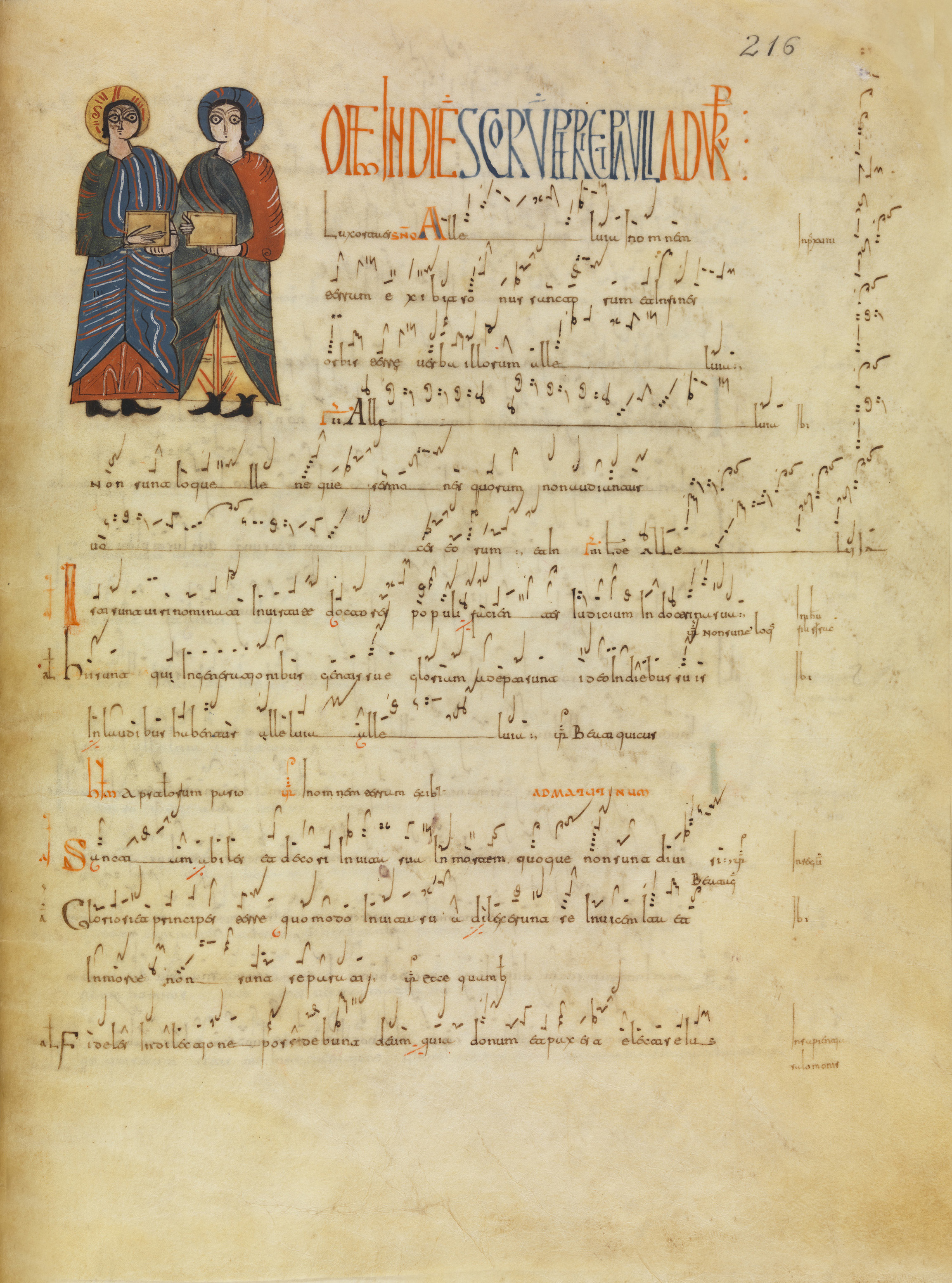 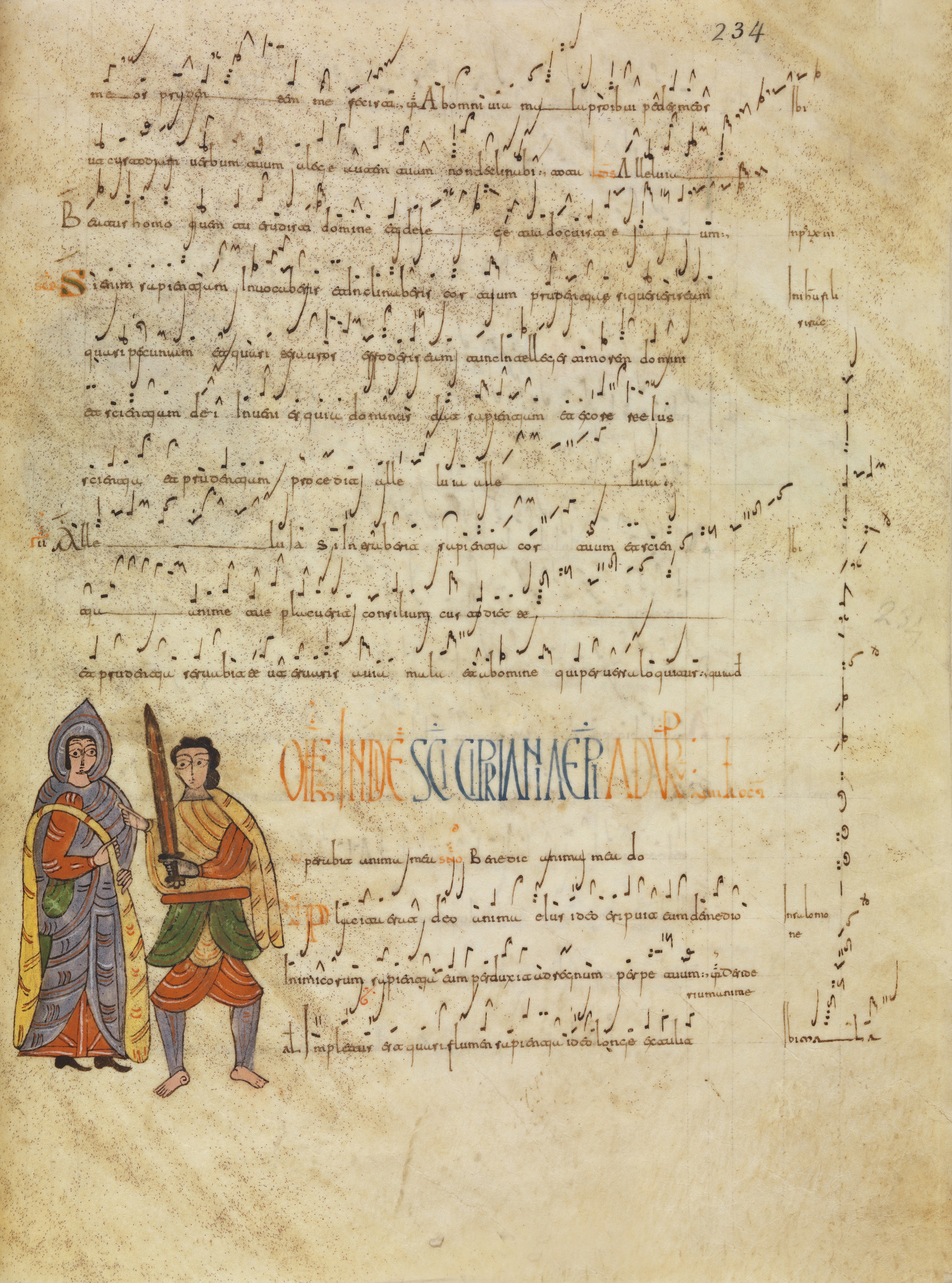 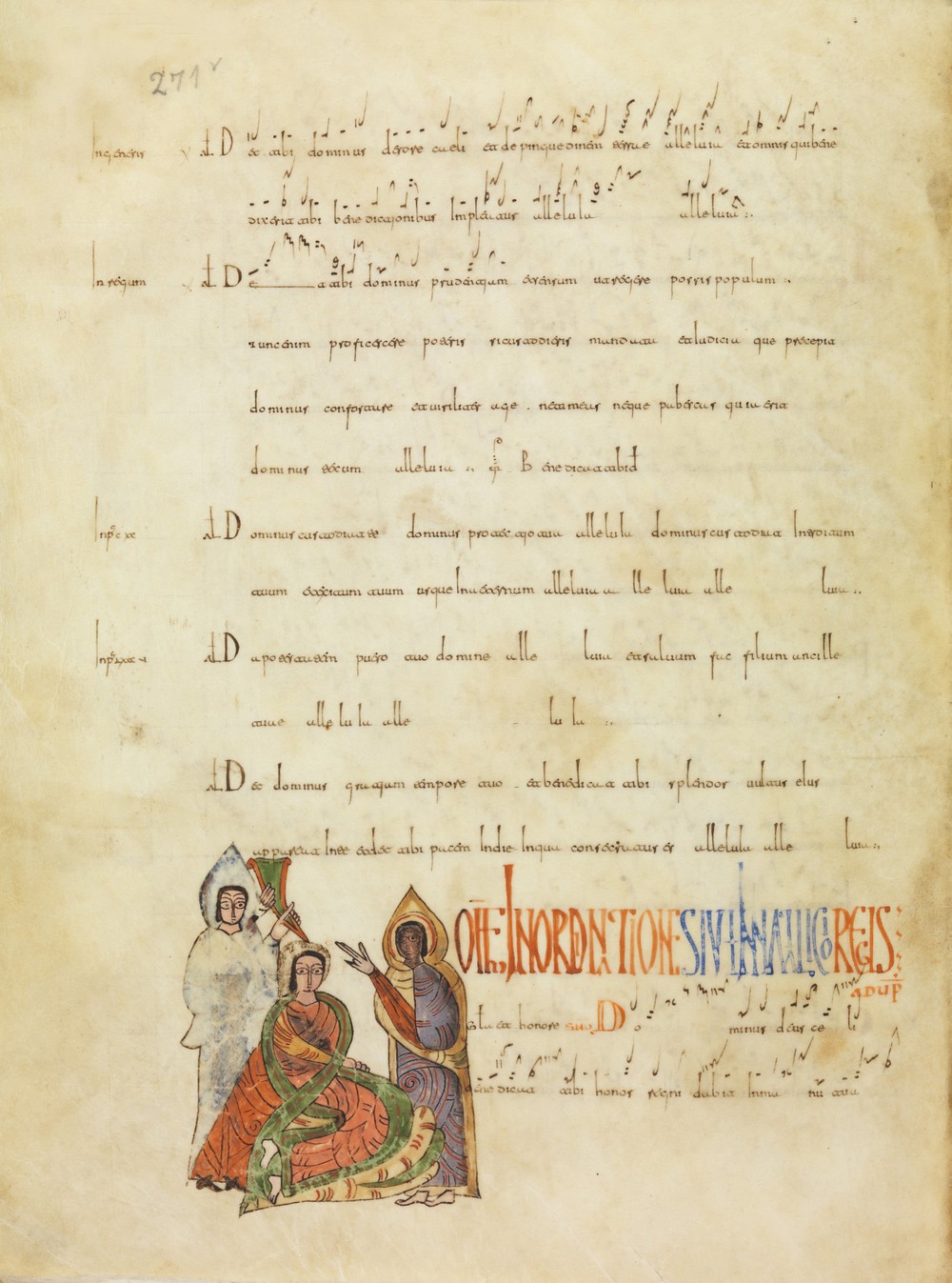