Turismo Prerrománico > Copies of the Commentary : The Blessed > Comments to the Apocalypse

Comments to the Apocalypse

The Apocalypse was a very controversial book from the canonical point of view in the High Middle Ages, then while its orthodoxy was questioned in the Eastern Church, in the West the opposite happened, to the point that already in 633, in the Fourth Council of Toledo, his continued reading between Easter and Pentecost is ordered. On the other hand, its content provides a 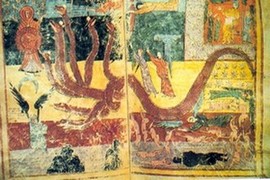 Clear argument in favor of the thesis of the divinity of Christ, that is, against the Adoptionist theory of Elipando and Felix, which increased his interest for the defenders of Trinitarian theory and, therefore, for an anti-doptionist declared as Blessed. This was possibly one of the basic reasons for him to write this work, of which we only have his reflection in twenty-four copies of which of the oldest -the so-called Blessed of Cirueña, considered from the end of the ninth century or early X- only one folio has arrived that appeared in the Monastery of Silos wrapping another manuscript, while the remaining “blesseds” are dated between the first half of the tenth century and the middle of the thirteenth. It is also interesting to note that in a Mozarabic catalogue from Cordoba in the year 882 there appears a “Expositium Danielis et Apocalipsin… in uno corpore”, that is, a “beato” that already contained also the Book of Daniel. This manuscript has disappeared, but it still existed in the sixteenth century, since it was seen by Ambrose of Morales in Oviedo.

Blessed had abundant books; he recognizes as sources, in addition to Saint John, Jerome, Augustine, Ambrose, Fulgence, Gregory and Isidore among others and his knowledge is undoubted not only by this complex work, but for the solidity he demonstrated in his complicated theological controversy against 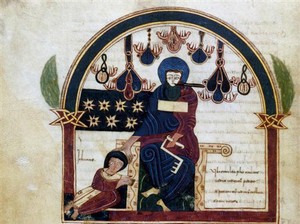 an adversary of as much quality as Elipando. However, for his Commentaries he basically used the works on the same subject of two African authors, Primasio and Ticonio and another Hispano-Visigoth of the time of Teudis, Apringio de Beja, of which he copies directly in many cases.

There are many doubts about the characteristics of this original manuscript. We do not know if Beato made a single version or if there were several, on what there are different theories that we will see later, since what seems clear is that in the later copies several families are observed, which follow different versions not only as regards the text used but also when analyzing the characteristics and contents of their miniatures, although some of those copies do not always match the textual version with the pictorial. We also do not know whether the original Blessed of the eighth century already included miniatures or whether they appeared in later versions, with the thesis that the original was already conceived to contain a visual support, which seems to us most likely, because even in some of the blesseds the text has references to images.

The Commentaries to the Apocalypse are usually formed by the following components::

The biblical texts are always presented from the same form, including the original text itself –storia-, followed by its explanation –explanatio– and, finally, for each text, interpretations on that text by other authors –interpretatio-are added. On the other hand, according to the structure observed in all his copies, in the case that this first Blessed was illuminated, the miniatures would be integrated between the “storia” and the “explanatio”, and would be in most cases related to the text in which they are inscribed.