What is a facsimile?

The facsimile (from the Latin fac simile, or similar beam) is an exact reproduction of any manuscript or printed document, the purpose of which is to allow its access without the direct manipulation of the original. This copy becomes in many cases the most appropriate way for the study, dissemination and conservation of valuable works of very difficult access in the cultural institutions that guard them. 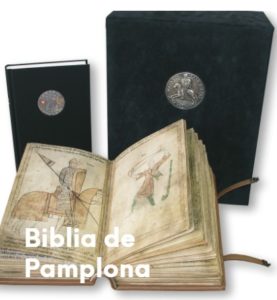 The production of manuscripts during the Middle Ages was very important both in Spanish desks and in most of Western Europe; Ireland, the Carolingian Empire and later in France, The Netherlands, Germany and Italy were also important centres of manuscript production at different times. Although much of them has been lost, we have received a large collection of books from that time, among which there are a significant number of manuscripts, of great quality and of enormous historical and artistic value, but also very fragile and in some cases deteriorated over the centuries, which are preserved with great care in general in very specialized places and are very difficult to access even for the great scholars of this topic.

Because of this, the work done by some specialized publishers, which print almost exact copies of the most interesting manuscripts, the facsimiles, in which they reproduce, respecting the losses of folios or part of them, both text and images as the texture and dimension of the support used including its defects, flaws, the chromatic range and the gold and silver decorations of the original.

Since medieval manuscripts used parchment sheets as a base and in some cases vellum, for facsimiles parchment paper is generally used except in exceptional cases where it is printed on parchment, always imitating all the characteristics of the support of the original manuscript. 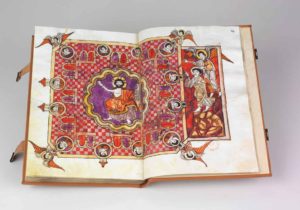 Using at all times the latest technical advances in photography, pre-printing, quality control, printing and application of metals and with handmade binding, virtually exact replicas of the original are obtained, which enable cultural institutions to offer researchers and other interested parties the possibility of studying their most interesting funds without risk, while offering it to other institutions, researchers, collectors and book lovers the possibility of possessing such accurate copies of works of incalculable value.

A noteworthy fact is that the facsimile of a medieval manuscript is usually delivered accompanied by a study volume by some of the great experts in medieval miniature, which usually includes the description of each of his images, a historical studytranslation of the text in some cases, while the editor guarantees the integrity and fidelity to the original of the facsimile, as well as its print run, which is usually less than one thousand certified copies, notarized and without possibility of reprinting.

The facsimile and the Asociación de Amigos del Arte Altomedieval 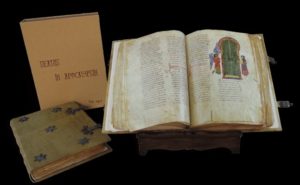 After ten years expanding our information in three languages on the medieval miniature, its history and main features, including a complete description with quality images of more than 50 of the main manuscripts, we believe that the time has come to also offer our followers information about the facsimiles of medieval codices that can be found at any time in the different publishers, art auction rooms, both face-to-face and digital, and shopping portals-Internet sales wishing to collaborate in this project.

This new development is offered in two highly differentiated areas:

We only have to highlight, for those who wish to know more about the medieval miniature, that they can see the largest known collection of facsimiles in the permanent exhibition “Templum Libri” installed in Ponferrada Castle, that these facsimiles can also be found in public libraries and that of all those published in Spain there are one or several copies in the National Library of Madrid.