The disintegration of the Roman civil service as a result of the fall of the Empire transferred to the upper echelons of the Church much of the leadership of a society that was for the most part Christian. Paganism survived in some rural areas as a remnant of the ancestral peasant culture, but in the 5th century there was no danger of it being organized in a separate church. Being a Christian in the West was, for the majority of the population, equivalent to being a Catholic.

This reality, however, did not imply a strong subjection to Rome. The national churches enjoyed great freedom to assume and promote education and culture, as reflected in the references to the literary creation of most of the important characters of that time, in the books of lives of saints and other “illustrious men”, and in the stories of the Visigoths, Swabians and Vandals who wrote St.Isidore. 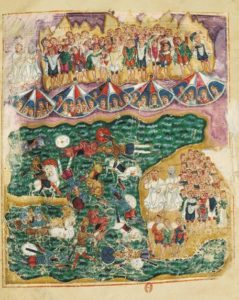 We know that the Hispanic Church, in accordance with the directives that came from Rome, created centers for the formation of clergy and monks in the episcopal sees and in the monasteries, in a program that included their literacy, basing much of his later work on the transmission to his faithful of the contents of a set of “spiritual” books and on the use of “liturgical” books in acts of worship. This implied the need for a significant number of such books, which was achieved by creating libraries and scriptoria in major cities and large monasteries, some of them founded by North African monks. The presence in Hispanic lands of these communities was due to the persecution of Christians affected by the Primacy of de  Rome, first by the Arian Vandals based in North Africa, and later by the Byzantine authorities. For this reason they settled in the east and southwest of the peninsula, bringing with them their libraries and contributing a decisive cultural influence.

We must assume that the Arian Church, until the conversion of Recaredo in 587, was the main transmitter of culture among the Visigoth people, and could aspire to reproduce the structures of the Catholic Church. But the Arian was, without a doubt, a less organized institution with a very limited cultural dimension. In any case, immediately after his conversion, Recaredo ordered to gather and burn all the Arian books, ending his legacy.

Nor can we forget the support that the letters received from some Visigoth kings who, in general, maintained very good relationship with the most enlightened ecclesiastical representatives and showed a great interest in leaving a written record of agreements, councils and laws.

The Arab conquest, however, was a severe blow to a culture that had reached the highest level in Western Europe on our peninsula. However, that culture survived both in the Mozarabic centres of Al Andalus and in the remote Christian kingdoms. In both cases a surprising vitality was maintained, as evidenced by the works of Beato de Liébana in the eighth century, the different chronicles that were written in the Kingdom of Asturias, the literary activity of Álvaro and San Eulogio -among others- in the Cordoba of the mid-19th century and the whole series of monasteries with library and scriptorium to which Saint Eulogio refers in the news remains from his trip to Pamplona.

At the end of the 9th century, the conquest and repopulation of the existing lands between the Douro line and the Cantabrian mountain range generated the influx to the new territories not only of people from the Christian north, but also of a significant number of Mozarabic people to whom the revolt of the Christian martyrs had made life very difficult in Al Andalus. In many cases they moved whole communities of monks with their libraries, as well as lay families who accompanied them in the repopulation.

The fusion that took place between these two groups of population in the Christian territories of the North, generated a wide set of artistic manifestations that have been grouped under the controversial denomination of Mozarabic Art. Being both descendants of Visigoth Hispania, but bringing different artistic and cultural influences, we would prefer to define this cultural emergence as “Neovisigoth”, to consider as “Mozárabe” exclusively to the artistic production of the Christians in Al Andalus, according to its original meaning.

Within this Neovisigoth would be included not only most of the buildings built in the Christian kingdoms between the middle of the ninth century and the end of the eleventh, but also the miniature manuscripts that were created in the monasteries of the area in that period, constituting one of the most interesting moments of Spanish art of all time.

An important fact to note in this facet is that until the ninth century the contribution was mainly literary, based on the writings of multiple authors, of which only one illuminated manuscript is preserved -the Pentateuch Ashburnham, whose Spanish origin is not confirmed- while in the rest of those who have reached us there are very few miniatures, although there are many reasons to think that there were also other codices illuminated in those first two phases. However in the 10th and 11th centuries, the production of books was mainly devoted to the copying of earlier manuscripts, which were illuminated with a miniature of high quality and which stand out for their artistic creation, giving rise to the birth of the Spanish high-medieval miniature.

Since the corresponding sections of this web describe the most important manuscripts, illuminators and scriptoria that existed since the end of the ninth century. Here we present a list of the most important centers of manuscript production and of the authors with their main works between the VI and IX, period in which the literary and artistic bases of the great Mozarabic miniature were created. 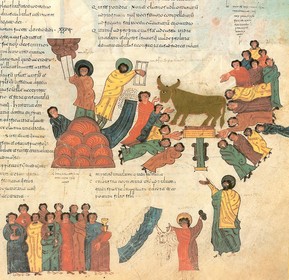 highlight is that while this last phase is characterized by its production of books was mainly devoted to copying previous manuscripts, which were illuminated with a miniature of high quality and which, therefore, stand out for their artistic creation, in the two previous phases the contribution was mainly literary, based on the writings of multiple authors, which were copied in the later centuries giving rise to the hatching of the miniature of the 10th and 11th centuries. Of these first two phases only one illuminated manuscript -the Pentateuch Ashburnham- is preserved, while in the rest there are very few miniatures, although there are many reasons to think that other illuminated codices also existed before the 10th century.

Since the relevant sections of this study describe the most important manuscripts, illuminators and scriptorium that existed since the late 9th century, Here we will just review the most significant of the first two phases from which we have received news.