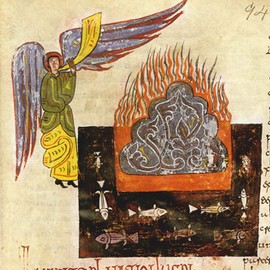 religious and cultural views, it was this monk of the Monastery of Santo Toribio de Liébana -then San Martín de Turieno-, who besides writing an extensive literary work, participated, along with Eterio, bishop of Osma and his disciple, in an important theological controversy with Elipando, metropolitan bishop and primate of Toledo, in which Pope Hadrian I and even Charlemagne had to intervene. He also actively participated in politics as advisor to King Silo, in addition to being master of Queen Adosinda, and was the creator of the legend of Santiago Apóstol as patron of Spain, only a few years before the opportune “discovery” of his tomb in Iria Flavia.

Born before the year 750, nothing is known of the origins of Beato, although by his level of knowledge and by the bibliography he handled, which does not seem likely to exist previously in a place so far removed from the Picos de Europa, assumed that he could emigrate to Asturias during the time of Alfonso I, perhaps as part of a monastic community of Visigoth origin that had survived until then in the Castilian plateau, which also transported his library, founding the monastery we call today Santo Toribio de Liébana.

What we do know about this character, who sometimes appears as a priest and sometimes as an abbot, is that from then on, until about the year 790, he was very active in three complementary but perfectly differentiated areas, who came to have a great transcendence and who make him one of the most significant figures of Christian Spain of the eighth century.

We do not know the date of his death, which must have occurred in the early 11th century, before the discovery of the tomb of the Apostle James. It seems that after the return of Alfonso II to the throne in 791 his influence in the Asturian court was considerably reduced, since, although it is known that in 799 he received a letter from Alcuin of York, there is no other news of his last years.