The preparation of manuscripts

The making of the parchment

Before the practical disappearance of the papyrus, with which both rolls and codices were made until well into the V century, the material used in the manuscripts was almost exclusively the parchment. This was not replaced until the diffusion of the paper that did not become general until the invention of the printing press, although already since the eleventh century it breaks into West through North Africa, and in the twelfth are witnessed the first paper mills in Muslim Spain. In the past, the permanent scarcity of scrolls made frequent the reuse of manuscripts that were simply scraped and re-polished. These rehabilitated scrolls are called palimpsests. 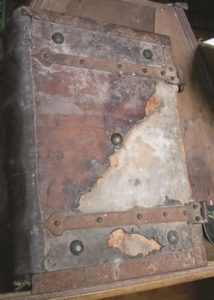 The parchment, a name derived from the city of Pergamon, which was eventually used without papyrus, offers a wide range of qualities depending on the origin of the skin. The best were those obtained from the skins of wild animals such as deer, gazelle or camel, although they were rarely used. Normally the skin of goat or veal was used, always influencing the quality of the youth of the animal, so the most luxurious codices were made with the skin of fetuses, which are called vellum.

The preparation of the parchment was the work of percamenarius, which used two procedures to remove hair and flesh, depending on whether the skin was more or less thick and hard. Thus, the sun-drying was faster and could last from one to two days. He could also soak the skin with water and lime, which led to a drying of three to ten days. In both cases the process was more or less careful according to the desired result, being sometimes normal to remove the first layer of skin to make the parchment thinner.

In either procedure it was necessary to scrape the skin on the frame using the lunellum. If it had been soaked with water and lime, the procedure was slower because it had to be submerged several times, scraped and soaked in water to remove the lime, scraped again still wet and finally after drying.

Later it was polished several times with suede or plaster, before and after forming the booklets that could be two, four or eight sheets, the latter being the preferred format in the high Middle Ages. Once the booklets were made, the lines that served as a skirt were drawn, the copyist receiving the parchment with the spaces already bounded, although the scribe did not then erase the writing boxes, being a typical aspect of ostentation of the quality of the book. 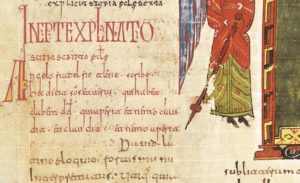 The characteristics of the parchment conditioned a transformation in the formats and in its valuation. In imperial Rome the papyrus scroll prevailed over the parchment codex, which was reserved for cheap editions. The reason was the circumstantial appreciation of an abundant and yet expensive material for the complexity of its manufacturing process. Here we contemplate the ephemeral of fashion and prejudice, which valued one material by reason of the prestige of the Egyptian, denouncing another by the logic of opposites. With the generalization of the parchment a new criterion of valuation was imposed that responded to the real properties of the skin. It was now easier to use both sides of a sheet, and in fact the parchment favored illumination by having the sheet more body than the papyrus. Remember that this was a vegetable fiber paste with which small strips were made to compose a sheet, resulting in a flexible material but with worse old age.

The copy of the text was prior to the creation of the miniatures, given the secondary and complementary character of these, although the codices of the liturgical office, such as sacramentals, evangelicals, psalteries and commentaries to the Apocalypse, were usually minified. Bibles were not so abundant in monasteries, because instrumental text and adapted to the specific needs of the offices prevailed. Only the reforms of the 11th and 12th centuries will insist on the need to renew the faith and restore the strictest discipline, which led to the indiscriminate copying of Bibles and the appearance of monumental Bibles.

Reed or bird feathers, preferably goose or swan feathers, and in particular the fifth or sixth outer feathers of its left wing, were used for writing. Index fingers, heart and thumb were used to write. There was also a fixed idea about the ideal proportions of the body of the text, since it had to have a height equal to the width of the page. Generally the oldest manuscripts had several columns, the one Carolingian and the two Romanesque. 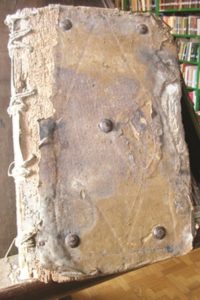 All available materials and substances, whether vegetable, mineral or organic, of animal origin, were used to minimize manuscripts. We know that in the Blesseds it was common, at least in the early stages of copying, to use pure colors without mixing, although it was not always possible. Thus the white was difficult to obtain and was usually replaced by the somewhat greyish tone of the albayalde. Black did not present problems, as both soot and rubber were accessible. Red ochre and yellow did not resist either, and the soil was simply crushed to the desired colour and soaked. Expensive and laborious, used only for special notes, was the use of pure gold that was mixed in gold leaf with nitrate salts, ox bile and copper flowers, to pass the mixture through a sieve. The typical Romanesque blue was obtained from powdered lapis lazuli and cardenillo from copper oxide. The green was malachite powder and did not offer great problems, but for the golden yellow was used arsenic sulfite, which gave a sulfur yellow hue and could be of dangerous management, apart from expensive. The yellow oropimente was also used. The brown, very used as writing color is obtained from the blackthorn, which dried, beat, peeled and macerated with water and then boiled. Metal salts, such as iron or copper sulphate, used binders such as rubber and solvents such as wine, beer or vinegar.

Regarding the authorship of the copy and the miniature there are several mentions in the manuscripts, but perhaps one way of doing it cannot be systematized, since everything would depend on the possibilities of the scriptorium in question. Normally the abbot had a superior culture which he could employ for the supervision of a work, although this work could be carried out by the monk responsible for the library, the “armarius”. With regard to the distinction between painter and scribe, one may wonder to what extent it was a close collaboration between talents, or complementary specialists. It could have happened, according to circumstances and monasteries, that both were versed in the occupation of others, or even that the scribe was the culmination of a labor of years, in which the copy was not entrusted to the most scholarly and even to the monk with greater upward projection.

The Blessed himself is named Presbyter, without being able to specify whether this designation was synonymous with a higher rank in the escriptorium, which would be normal. Several of the copyists appear as presbyters in the colophons, sometimes they speak of a socius that reveals a plane of equality and also of a disciple or collaborator. In some cases the mention of archipictor appears and we cannot specify whether there was a general and standardized dynamic in all the designations. But before the 11th century, there was rather a tenuous hierarchy although this could never be missing. 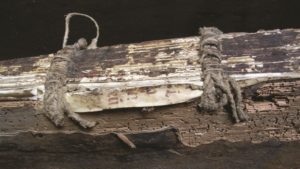 At first the sheets were united with each other simply, but with the invention of the loom, which allowed to join more of them, they were sewn with nerves based on strips of leather and parchment. The first looms are represented from the 12th century but could have been before. The case is that the volume gained in consistency which resulted in a better old age since, from the tenth century and until the twelfth century, the lids and the loin were lined, with the aggravating that the hollow loins were not used, so the codices were rigid and easy to unravel. But then, with the tendency to sew the booklets, they went to use hollow loins and the result was the greater flexibility of the volumes.

The lids were made of hardwood, ha-ya, elm or oak for liturgical books. The wooden plates were sometimes decorated with ivory reliefs or carved in silver and gold, set with precious stones. Instead, standard manuscripts were dressed in leather, which could be embossed or, at a lower cost, chiseled. The cladding was decorated with irons and, as in the beginning the volumes were laid down, the correct ventilation of the library collections was achieved. The guards had embossed stamps, called embossed stamps, and sometimes an ex-libris called suprabooks.